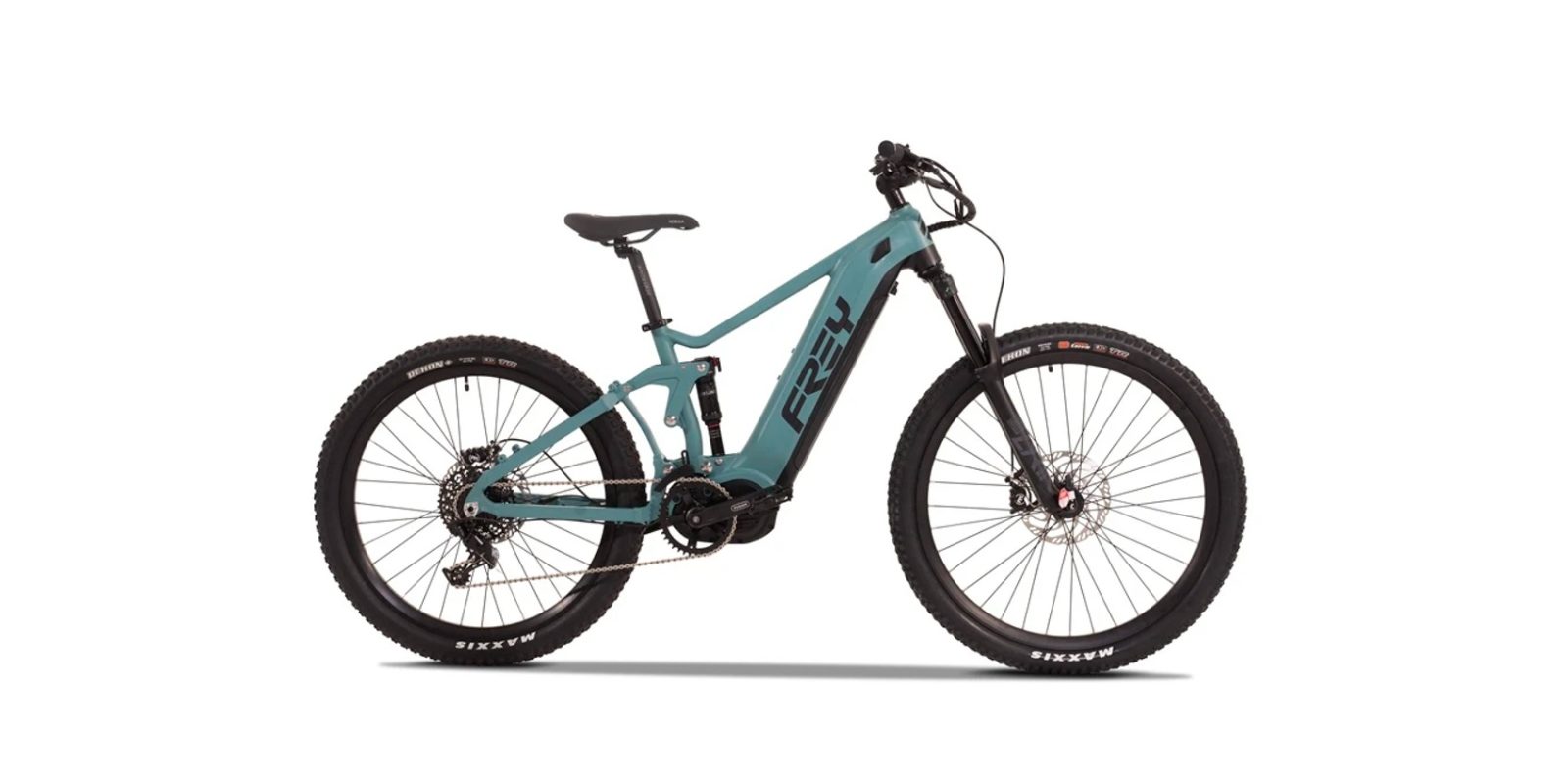 The AM1000 has long been FREY Bike’s best-selling electric mountain bike platform. Now the company has released the sixth version, which features a number of upgrades to the 1,000+ watt e-bike.

FREY Bike is based in Jinhua, China, and builds premium-level electric bikes designed to compete with Europe’s top eMTBs.

The AM1000 has been a staple of FREY’s lineup, combining the super-powerful Bafang Ultra mid-drive motor with high-capacity batteries and high-end bicycle components.

The newly launched AM1000 V6 marks the first version of the e-bike to incorporate a fully-integrated battery, among a slew of other updates.

The large 48V 21Ah battery is entirely hidden inside the downtube of the frame, much like the popular FREY EX model.

With 1,008 Wh of capacity, the AM1000 offers more battery than just about any electric mountain bike out there. FREY and Luna Cycle are virtually alone in the battle for top eMTB battery capacity.

The reason that much battery is necessary is that both companies also use high power mid-drive motors. In the case of the FREY AM1000, the Bafang Ultra mid-drive motor puts out a claimed 1,000W of power. In actuality, peak power is often measured at closer to 1,500W in bursts.

That helps the e-bike climb steep terrain that would normally only be accessible by dirt bikes or Sur Ron-style trail bikes and also offers fast acceleration.

It doesn’t hurt in the top speed category either. FREY doesn’t publish an actual top speed, partly since it is quite variable depending on gearing, rider weight, terrain, etc. But when riding the AM1000 V5 on flat pavement, I hit around 37 mph (59 km/h).

The V6 also now comes with a mullet-style wheelset offering a 29″ tire in the front and a 27.5″ tire in the rear. That setup offers the best compromise between ride and acceleration/nimbleness. It’s an increasingly common choice among the premium eMTB manufacturers such as Trek and Specialized.

The AM1000 V6’s aluminum frame comes decked out in premium suspension components consisting of a RockShox Yari RC Boost fork and a RockShox Deluxe rear shock.

FREY even offers a frame kit if you want to choose your own components, meaning you get just the frame, swingarm, rear shock, battery, motor, and charger. Then the rest is up to you to outfit the bike as you see fit.

The AM1000 V6 is also available in three frame sizes and several new colors, such as Jet Black, Aero Blue, Rose Dust, and Sheen Green.

Those parts don’t come cheap though, with the bike now priced at $5,180 before shipping.

Considering that FREY is competing with several high-end electric mountain bike companies that charge several thousand bucks more, that price isn’t quite as painful as it may seem for the uninitiated.

You can check out the new e-bike in the video below, which also shows off a look at FREY’s new bike part built in its home town.

I’ve been a big FREY fan ever since I visited the company’s headquarters and factory on a trip to China in 2019.

The company’s e-bikes offer something we rarely see in the e-bike industry, a combination of high power and high-quality builds.

There are plenty of high power e-bikes out there, but most cut corners with budget-level components to keep costs reasonable.

There are also plenty of high-dollar electric mountain bikes with top-shelf components, but they are often underpowered for the pesky reason of having to conform to European or US e-bike laws.

A beautiful thing happens when you throw e-bike regulations out the window: you can get high power and high quality all at once!

To be fair, you can easily program powerful motors like the Bafang Ultra to legal limits, which may or may not suffice in your local town or state.

For me, when I’m riding trails, I’m more worried about keeping my line than whether or not I’m going to see red and blue lights on the single track. I’ll, of course, always check my speed when I’m around other riders, but heading off-road offers a bit of a respite from e-bike regulations designed for public roads.

And I must say that my own experience with a FREY EX e-bike definitely helped me up my game. Fortunately, the AM1000 V6 incorporates a few things that I loved about the EX, such as that internal battery.

While FREY’s bikes are pricey compared to much of what we see from China, they are a world away in terms of quality. FREY doesn’t cut corners when it comes to build quality – that’s for sure. And the e-bikes fill a comfortable niche that very few other companies can touch.

High power motors and high quality suspension/drivetrain/brakes/etc are a match made in heaven.