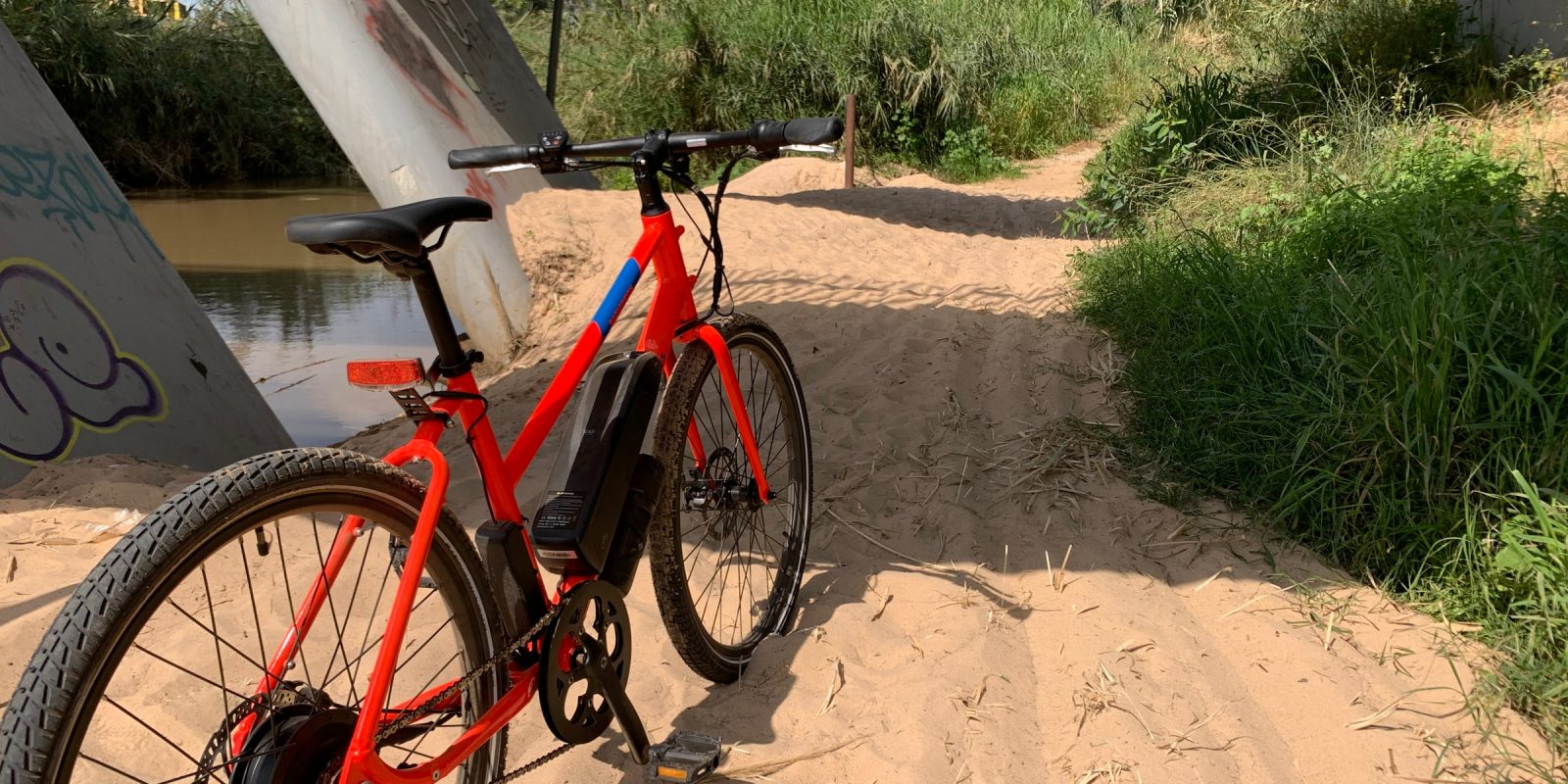 There are hundreds of models of electric bikes to choose from in the North American market across a vast price range. That can make it confusing to find the right one for you. While fancier, higher-priced e-bikes offer more features and longer-lasting parts, many riders prefer to get started with a more budget-friendly option. After testing countless e-bikes on both the higher and lower-priced end of the market, we’ve compiled the best of the budget-friendly options this year.

Since fat tires have been incredibly popular this year due to their go anywhere, do anything riding style, we’ll start there with some great fat tire e-bike options on a budget.

The Lectric XP 2.0 is usually the first e-bike I recommend to someone looking for a budget model that still offers good speed and power.

The throttle makes it a great bike for those who just want a speedy little motorbike, and the pedal assist functions mean you can also use it for fitness or recreation when you want to get in some real pedaling action.

Plus, since the bike folds in the middle and at the handlebars, you can even fit it more easily in a car trunk or back seat to take it on a trip.

The bike is normally priced at $999, but is on holiday sale right now for $949, plus the deal includes a free comfort seat upgrade, suspension seat post, upgraded headlight, and free lock.

Check out my full written review of this awesome e-bike, and see the testing video below.

If you want larger diameter fat tire wheels, you might want to check out Ecotric’s fat tire e-bike.

I had a blast riding this one on some fire roads outside of Los Angeles, where I put its hill climbing to the test.

The 500W motor isn’t the strongest I’ve tested, but it’s hard to complain too much with a price of just $799, which is actually better than the price I paid when I snagged one for $850 before its current sale.

The bike gets up to 20 mph (32 km/h), which is fast enough for most riders. I tested it on both street commuting and off-road trail riding scenarios, where it performed well in both roles.

There aren’t any fancy components here; it’s all budget-level stuff. But that’s to be expected at this price.

As long as you don’t try jumping it 10 feet in the air, it’s likely to serve you just fine for normal, everyday riding.

Check out my review of the Ecotric here, or grab it while it’s still on sale on Amazon here.

While fat tire e-bikes are fun for off-roading, city-friendly e-bikes are often more useful for utility roles like commuting.

There are several good road-ready options available this year that can easily fit most budgets.

The $999 RadMission is one of my favorite city e-bikes. Not only does it have good parts for the price, but it’s backed by the largest and most reputable e-bike company in North America, Rad Power Bikes.

They’ve landed over $300 million in funding over the last year or so, and sell more e-bikes than anyone else by a hefty margin. So if you’ve ever worried about whether or not a company will be around to offer service and support in the future, Rad puts those worries to rest.

The RadMission is a single-speed electric bike, but I’ve found it’s still good for moderate hills since the 500W motor helps power you up an incline even without a lower gear. I’ve even taken it on some serious off-roading adventures and the bike has performed admirably on just about everything, only being foiled by deep sand where its street tires weren’t sufficient.

Despite my off-road shenanigans though, this is still very much an on-road bike. The 20 mph (32 km/h) speed makes it good for city riding, and the ability to add any number of Rad’s accessories enables riders to modify the bike to their own needs.

You can see my full review of the RadMission here, or grab it while it’s still on sale from Rad.

The Ride1Up Roadster V2 is perhaps the best deal for a belt drive electric bicycle on the market right now.

Unlike chains, belts are quiet, longer lasting, and never rust or need oiling. They’re a slick way to make a bike lower maintenance and make it more pleasurable to ride. But they’re also usually expensive.

The Ride1Up Roadster V2 offers a belt drive at a budget price. Most models of the Roadster V2 are $995, but they have the larger frame size on sale right now for $895, which is a steal of a deal.

The bike is fairly minimalist with a small display and a smallish battery, but the lack of a throttle means that its pedal assist range is still around the same as the throttle range of all the other e-bikes on this list. I’d say 25-30 miles of range is manageable, and you can go even further with a lower power setting.

If you’re looking for a lightweight, stealthy electric bicycle for a modest price, this is a great option.

Check out my full review or head on over to Ride1Up’s sale page.

The $799 HeyBike Cityscape is another one of those city-oriented offerings that can be great for someone on a tight budget.

It may not come in many colors (I hope you like black), but it still packs in good performance with speeds of up to 20 mph (32 km/h).

Throttle-lovers will be happy to see that pedaling is optional on the Cityscape, but you can still make good use of the pedal assist whenever you want a classic cycling experience.

The bike even includes fenders, lights, and the rear rack in the price, which is a rarity when you get to these low prices.

Check out the current sale on Amazon, or see my video of the Cityscape below.

The Ariel Rider Rideal may look like the RadMission, but it’s got a few key differences.

This metro-style e-bike adds a higher power 750W motor for better acceleration and hill climbing, and it also swaps in a 6-speed Shimano transmission instead of the single-speed setup.

The battery is also larger, offering around 30-40% more range.

The 20 mph (32 km/h) speed is pretty much on par with all other Class 2 e-bikes, but the low-cost and high utility make this e-bike an awesome option for commuting or leisure riding.

I personally prefer the mid-step frame, especially when I have something large loaded on the optional rear rack. But there is also a high-step frame if you prefer the more traditional diamond frame shape.

The bike is normally priced at $999 but is now on sale for just $899, which is a rockin’ deal. Check out my full written review here, or see the video review below.

I’d heard so many good things over the past year about the Hyper electric mountain bike from Walmart that I bought one to test it out myself.

The only problem is that I didn’t have such a great experience myself, so this one is a mixed bag for me.

It is normally priced at $598 and occasionally gets priced reduced to $398 (like right now). And so I had high hopes for this one, especially after hearing “it’s great, for the price” from so many people. But when mine arrived, it had an issue with the pedal assist sensor, and then a few other mechanical things were worrisome, like a bent brake cable housing and a seat post clamp that didn’t tighten enough.

Perhaps mine just got knocked around too much during shipping, or I was just unlucky. But since so many people seem to like this one, I’m including it with the caveat that mine arrived in less than ideal condition.

For what it’s worth, Walmart took it back and refunded me with no questions asked. I’ve recently bought another to give it a second try and see if mine was a lemon. Once it arrives, I’ll be excited to get to testing it.

It was reviewed by Electrek‘s own Mikey G, who called it a no-frills e-bike that still gets you that classic cruiser action on a budget.

With a nearly 20 mph (32 km/h) top speed and a single-speed drivetrain, this is the type of bike you’d want for leisurely rides along a winding beach path or picturesque boardwalk.

Check the bike out in action in the video review below.

An e-bike for everyone

When the budget for it exists, I often recommend that new riders spend a bit more to get a better quality, longer-lasting e-bike that they’re likely to enjoy even more. But with the high prices of e-bikes, I know that’s not always possible.

So hopefully this list of tested and verified e-bikes helps guide you on your way to finding a more budget-friendly option to get you rolling on your local trails or streets soon.