Belt drives on electric bicycles – what are the pros and cons? 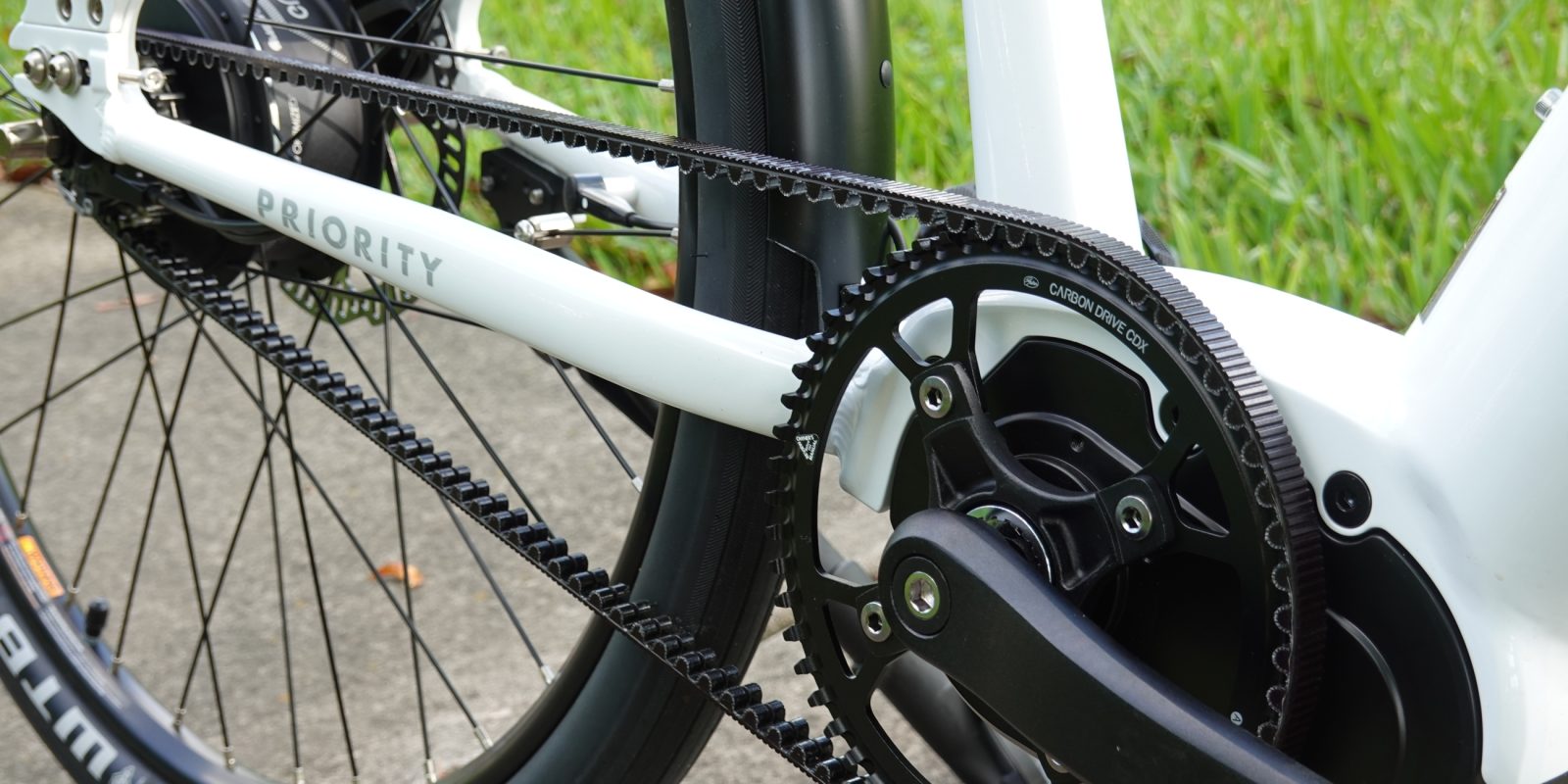 The number of electric bicycles with belt drives has been increasing seemingly overnight. What was once a rarity for just the “super nice e-bikes” is now finding its way onto a wider range of e-bike styles than ever before.

Belt drives are generally considered to be an upgrade over chains when it comes to bicycle drivetrains. Instead of greasy, archaic metal chains using several-hundred-year-old technology, belt drives use modern day, carbon fiber-reinforced rubber to transfer power to the rear wheel.

And sure, we’d expect such niceties as belt drives from $5,000+ Riese & Müller electric bikes.

But now that we’re seeing them pop up on much more affordable e-bikes like the $2,699 Priority Current and even the $995 Ride1Up Roadster V2, it’s time we take a deeper look at belt drives for e-bikes.

As e-bikes featuring this tech are now becoming more accessible, we’re breaking down the advantages and disadvantages of the systems, and whether or not you need a belt drive setup on your e-bike.

Advantages of belt drives on e-bikes

Unlike chains that require frequent oiling and cleaning, belts can largely be ignored. If you ride through thick mud, it’s probably a good idea to knock the dried wads out. But other than that, you’re pretty much good to go with some good old-fashioned neglect.

Next, the presence of a belt drive usually means you’re going to get some kind of neat-o internally geared hub. Since you can’t use a standard derailleur like on a chain drive, you don’t have to worry about adjusting your deraileur and messing with finicky gears. Instead you’ll likely have some cool hub like an Enviolo CVT or maybe even a Rohloff if you bought a really nice bike.

Some belt drive e-bikes, especially the more affordable ones, stick with a single-speed setup. That’s how the Ride1Up Roadster V2 keeps the price below $1,000, by the way. So you’re out of luck with those if you were hoping for an internally geared hub.

Even without maintenance, good belts simply last. Gates Carbon Drive, maker of some of the best e-bike belt drives out there, has systems that can last for 50,000 miles (80,000 km), believe it or not!

Belt drives are also cleaner, which is great for commuters. You’ll never get a grease mark on your nice slacks or ankle.

They’re smoother and quieter too – an important factor for e-bike riders that enjoy the quiet nature of cycling at speed with barely the whirr of a motor in the wind.

While belt-drives are lighter weight than chain drives, those benefits don’t really matter much to e-bikers, since our e-bikes are already fairly heavy. Saving a quarter pound on a 55 lb e-bike doesn’t mean much in the grand scheme of things.

Disadvantages of belt drives on e-bikes

As much as I love belt drives on my e-bikes, they aren’t totally without fault. There are a few downsides.

First of all, there are fewer options for components. For chain drivetrains, there are tons of options for types of chains, sprockets, cassettes, chainrings, derailleurs, etc. But with fewer belt drive manufacturers and most systems being proprietary, you’re more limited when it comes to custom modifications or upgrades.

Next, frame compatibility can be an issue. Because most belts can’t be broken in the middle like a chain to feed through the frame, instead the frame needs to open. This means a frame needs to have a bolted connection somewhere, or it has to have a funky chainstay design that lifts up and over the belt.

The new Harley-Davidson Serial 1 e-bike prototype we saw earlier this week used that funky chainstay design, if you want to see it in practice. Smaller e-bike frames, like the one seen in the Riese & Müller Tinker Vario above can sometimes pull this off in a less obvious way.

Full-suspension e-bikes can also have a tricky time with belt drives, since there is no derailleur to add tension. There are ways around this and some full-suspension belt e-bikes exist, but they are more rare.

Belts are also technically less efficient, meaning you have to add a tiny bit more pedal force compared to chains. However, with the assist of an electric motor, that downside doesn’t affect us e-bike riders as much.

Lastly, and arguably most importantly for riders of already-fairly-pricey e-bikes, belt drives are simply more expensive. Though prices are coming down, the technology is still fairly new and the materials aren’t as cheap as chain drive systems. That’s why we don’t see belt-drives on $500 e-bikes.

But perhaps that day isn’t far off, as prices continue to drop and companies continue to innovate. Belt drives and their numerous advantages could soon find their way into your garage on a new e-bike. They already have in mine!