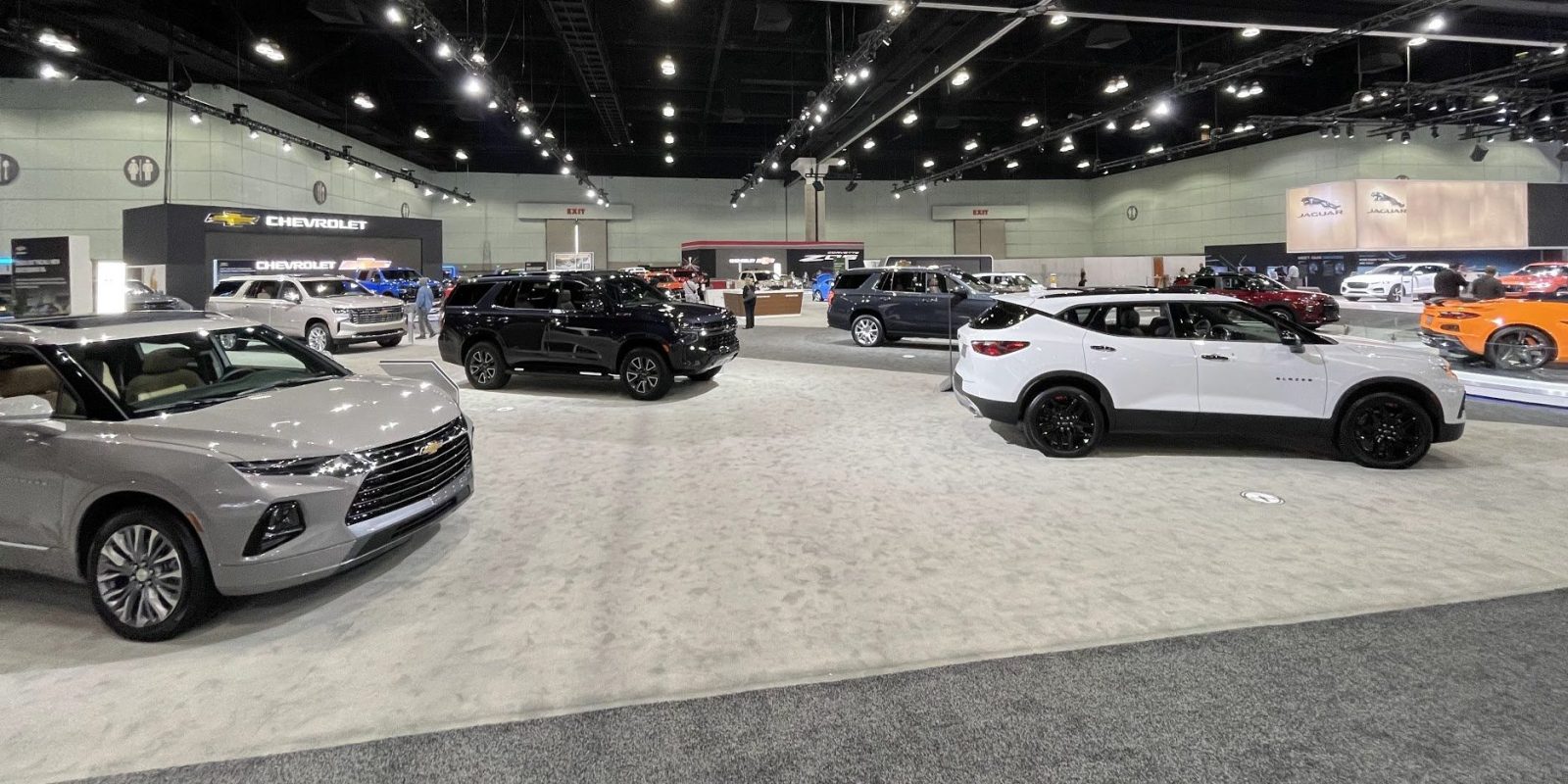 In October 2017, GM announced that it would release 20 new EVs by 2023 – just over five years from then, and just over one year from now. How’s that going?

If GM’s booth at the LA Auto Show is any indication (and it is): Not very well.

The LA Auto Show is a bit muted this year, as the COVID-19 pandemic is still happening t (and Los Angeles has strict mask and vaccine/test guidelines for entry), so a lot of automakers who would normally be here are absent. No BMW, Audi, Mercedes, Honda (except at a dealer booth in the back corner) – and notably, no GMC or Cadillac.

The remaining booths are larger and more spread out. There’s your standard slate of anonymous gas cars, but most automakers had the good sense to put their electric cars front and center, or otherwise bring attention to them – even if they’re relatively weak showings, like the Stellantis booth with large “e” signing above three overpriced, tiny-range plug-in hybrids.

After all, this is California, one of the biggest EV markets in the world, where half of the US’s EVs are sold, where the electric revolution began. Californian want anything new and revolutionary, and we want it first. On the freeways in LA, you can’t go more than 30 seconds before seeing an electric car on the road. If you’re going to bring your EVs anywhere, this is the place to bring them.

Even the famously anti-EV Toyota brought their bZ4X (along with a caged-off display of goofy-looking EV concepts that recalls a Simpsons episode) and Subaru, who have had a “National Parks”-themed booth full of nature-destroying gas cars for years now, showcased their new Solterra. At least they put in the effort to greenwash a bit.

So surely, GM, who are “all in on electrification,” who “aspire” to be all-electric by 2035 (which is the least they could do), who have been praised for electrifying the auto industry, would bring something, right?

Well, apparently not. In a quick walk through their ghost town of a booth, we saw nothing new, nothing interesting, nothing with a plug. Most automakers have some sort of vestigial wall charger display standing vaguely near a PHEV compliance car (with ~5kWh of battery in it, coincidentally the minimum amount for carpool and rebate access), but GM didn’t even have that.

In fact, here’s the only plug we could find in their booth:

This complete lack of anything electric is made worse by the fact that GM promised it wouldn’t be this way. In October 2017, GM said they would have “at least 20 new all-electric vehicles that will launch by 2023.” GM president Mark Reuss added that “these aren’t just words in a war of press releases.” And one year ago, they upped that ante to 30 new EVs by 2025.

One might respond, “That’s not fair, that’s just a temporary pause of the Bolt and it’s all LG’s fault,” but that excuse highlights the point that those are the only models GM currently has.

Even if we count the EUV as a separate model and we go backward or forward in time a few weeks, there has been no growth in GM’s EV line since that promise was made.

GM has had four years out of the five they gave themselves, and they haven’t made any progress whatsoever on their promise. They’ve launched one EV (Bolt EUV) and stopped three production lines (Volt, and temporarily the Bolt and EUV). If they had delivered on even 20% of their promise in the four years since they made it, they’d still at least have more EVs now than they did then. But they didn’t, and they have nothing.

Another excuse could be the global pandemic, but GM had three years of roughly no action prior to the start of the pandemic, and the pandemic has only underlined how bad burning gas is for air quality and how EVs are the way to go, and EV sales have rocketed up despite the whole industry being down. Instead, GM spent most of that time lobbying and suing to stop EVs… and only stopped right after President Joe Biden’s election.

To be fair, GM brands GMC and Cadillac are not at the show. Both of these brands have a pretty exciting new EV coming up – GMC with the Hummer EV and Cadillac with the Lyriq – and we’re sure either would be front and center at their respective hypothetical booths. Cadillac has committed to being all electric going forward, so that’s a good start.

But again, those are still only two new cars GM-wide, bringing the tally to 3/20 if you count the EUV. And those two only count if you interpret “launch” to mean “reveal,” as neither car is yet on the road (though both sold out immediately when reservations were opened).

So there really is no excuse for this sad showing, and no charitable angle from which to look at it. GM is failing miserably at delivering the promises they’ve made.

But hey, at least they’ve still got a year to go. It sure will be exciting to see the 20 EVs they’ll be debuting in the next year, and they’re going to need a lot of floorspace at the 2022 LA Auto Show, the last one before their 20-EV deadline, to showcase all of them. We’re looking forward to it, GM. You promised.