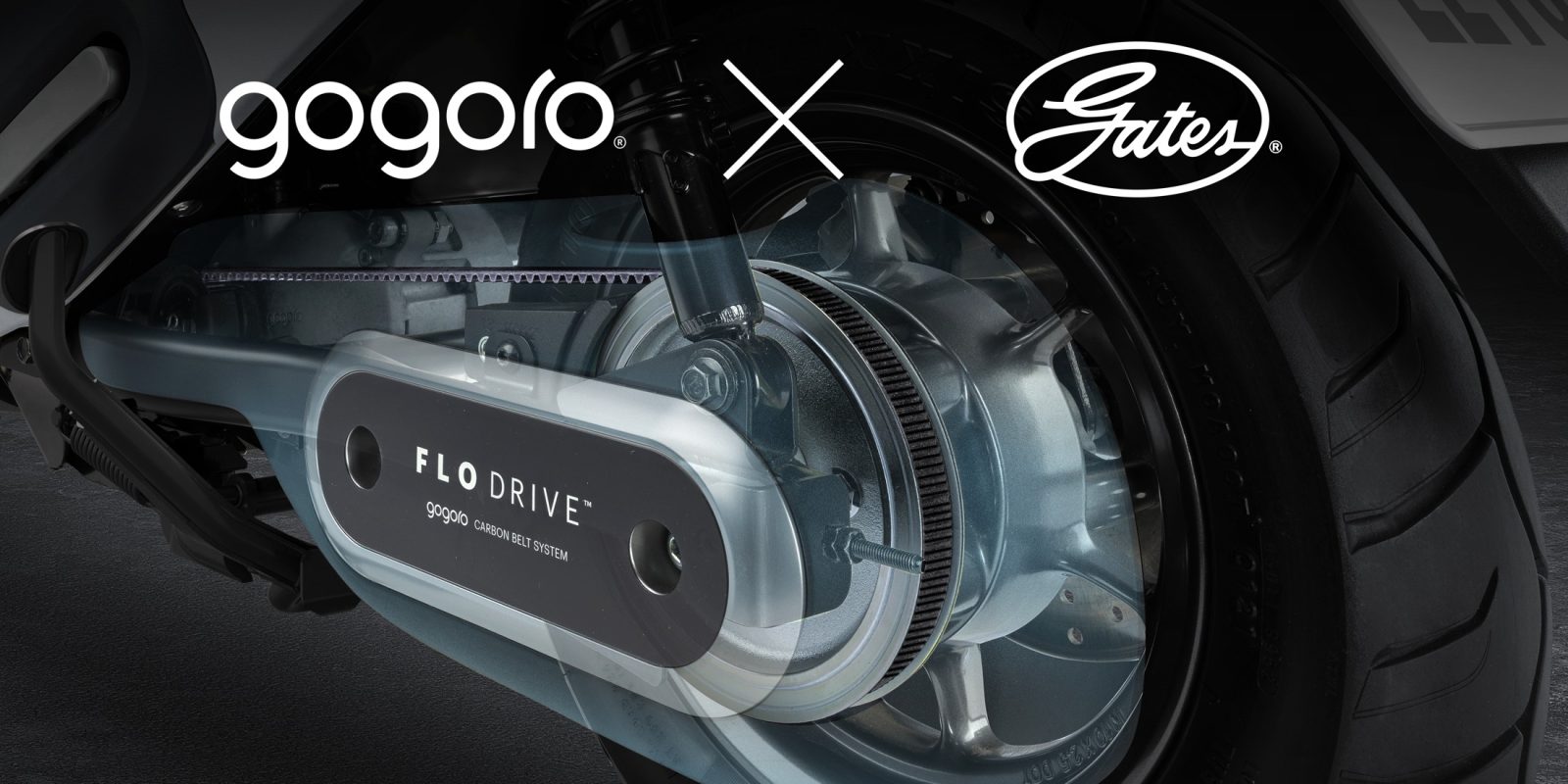 The drivetrain will be available to some of the largest scooter and motorcycle companies in the world via Gogoro’s vehicle manufacturing partnerships.

Gogoro is perhaps best known for its swappable battery system known as the Gogoro Network.

It is widely acknowledge to be the world’s leading battery swap network, and boasts over a quarter of a million daily battery swaps among Gogoro’s electric scooter riders.

With over 2,100 GoStations spread around Gogoro’s native Taiwan, riders have already performed over 250 million battery swaps.

Gates Carbon Drive is famous for its belt drives, which feature ultra-reliable and long-lasting power transmission belts and highly engineered belt sprockets that are superior to chain drives in just about every metric.

The drivetrain consists of a 6 kW (8 hp) water-cooled motor that uses a helical gear setup combined with a Gates carbon fiber belt drive system to power the rear wheel.

The drive is not only easier to maintain with reduced maintenance, but also offers more responsive power along with a 40% quieter ride experience.

The FLO DRIVE will be available exclusively to Gogoro’s vehicle partners in the Powered By Gogoro Network. The number of vehicle makers using Gogoro’s batteries is growing quickly and already includes some of the largest two-wheeler manufacturers in the world, such as India’s Hero Motorcorp and China’s Yadea and DCJ.

Gogoro also has longstanding partnerships with companies like Yamaha and Suzuki that will also benefit from access to the jointly developed FLO Drive.

Gogoro CEO Horace Luke explained in an interview with Electrek why two-wheelers are the best way to effect a massive shift away from gas-powered vehicles:

“In China, India and Taiwan alone, there are over half a billion two-wheelers. Around 50% of commuting miles done every day are performed on two-wheelers. Urban mobility is a huge sector. It is the two-wheelers that are going to convert the world to electric faster than any other form of transportation.”

Motorcycles and scooters are a dominant form of transportation in much of the world, especially in developing countries and emerging markets.

On the heels of the COP26 environmental summit, we’re seeing now more than ever just how important these countries are for meeting global climate objectives.

But as Horace explained, electric two-wheelers can’t just be another option – they have to offer real advantages:

Electric two-wheelers already have great potential to displace traditional gas-powered alternatives due to their ease of use, more enjoyable operation, and lower maintenance concerns. Compare an internal combustion engine with its hundreds of moving parts to an electric motor with perhaps just a single moving part: a pair of bearings.

Then Gogoro adds in advantages like the company’s distributed battery swapping network to further sweeten the pot, especially in developing countries.

But with the limited energy density of batteries compared to gasoline, Gogoro and Gates have focused on squeezing every bit of efficiency out of their systems to ensure the best range and utility of two-wheeled EVs. In addition to the benefits offered by Gates Carbon Drive belts, such as their quieter, cleaner and longer-lasting operation, efficiency is also paramount. And efficiency has always been at the top of the list for Gogoro as well.

“Batteries reach a certain apex and we need to find a way to squeeze every drop of energy. You know us, we go as crazy as designing tires and designing drive systems and new electronics all in the interest of squeezing every drop of efficiency out of it.”

Gogoro and Gates will be showing off the FLO DRIVE on a Viva Mix electric scooter next week at EICMA 2021, the Milan Motorcycle show.

Electrek will be there to share with you all the highlights, so stay tuned for more coverage.