I drove a rare solar-electric yacht to test clean-sea propulsion, here’s how it went 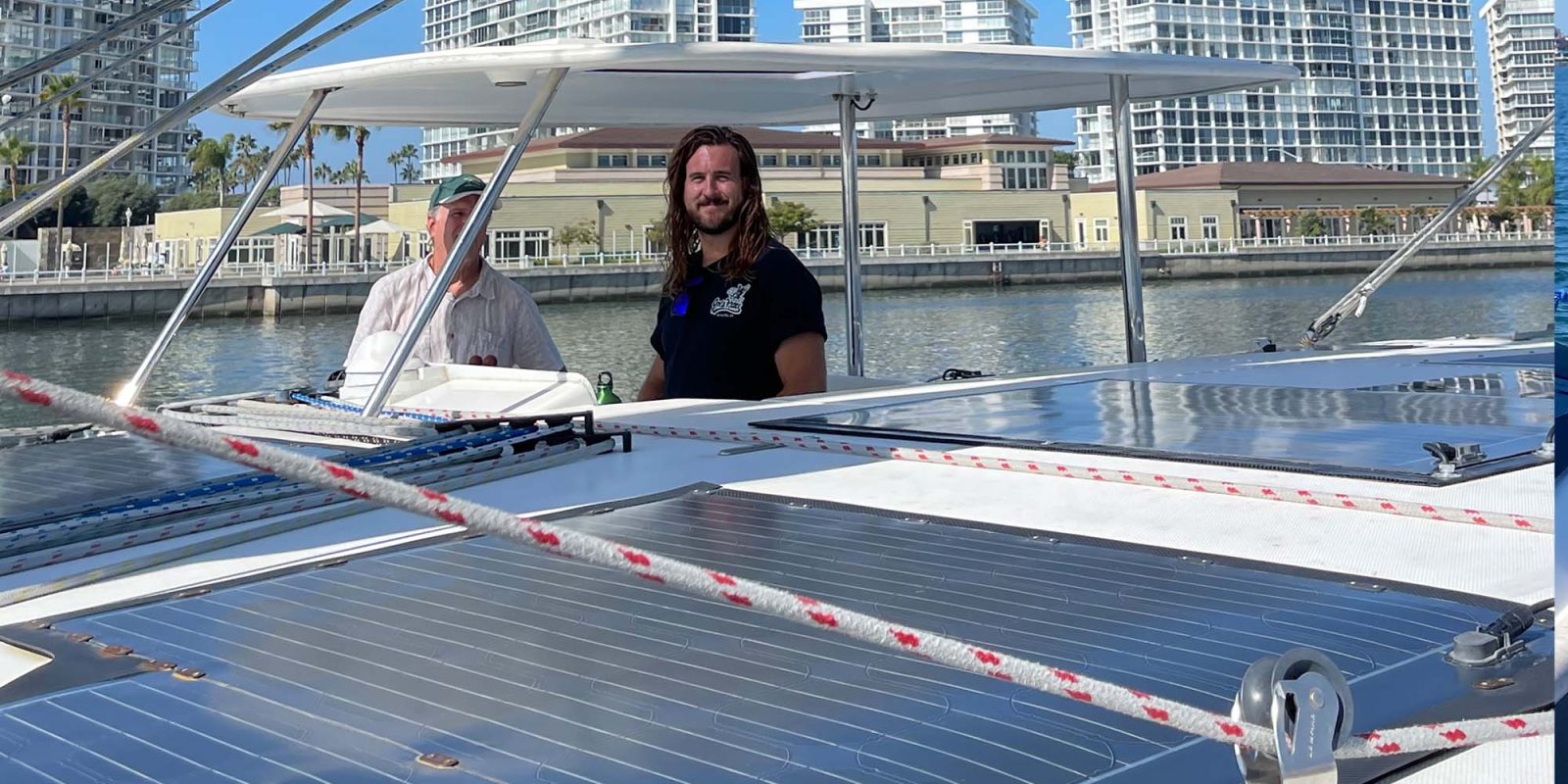 While we at Electrek often tend to focus on electric vehicles taking over roads, it’s important to remember that our inevitable abandonment of fossil fuels stems to all modes of transportation, whether it’s by land, air, or even the sea. I recently had the opportunity to set sail on Sunwater Marine’s Ramblin’ Rose, a 40-foot sailing yacht powered by solar panels and electric propulsion. It’s one of the only vessels of its kind on the West Coast.

Sunwater Marine is a San Diego-based nautical transportation company with a keen focus on spreading the benefits of renewable energy and electric propulsion to sea dwellers.

It was founded by president James Richmond in 2020, amid the global pandemic. Richmond had a little more free time to search for a boat for blue water cruising to which he could add solar.

James has been sailing for over 50 years, and has nearly 40 years of experience in the renewable and energy-efficiency industry.

He soon found a 2015 Leopard 40 Catamaran and initially planned to simply add solar panels for an electric range and an energy-efficient water maker.

However, James soon discovered viable options for electric propulsion, and began researching the possibility of converting his new yacht to be be solar-electric.

The result is the Ramblin’ Rose, a catamaran that can haul 12 passengers and sleep up to nine. It also happens to be one of the only solar-electric yachts in the West Coast.

I got the chance to take the solar-electric yacht out of beautiful Coronado and test the technology out myself.

As previously mentioned, Sunwater Marine’s Ramblin’ Rose is centered around a Leopard 40 catamaran, built by Robertson & Caine in South Africa. Richmond then put an additional $100k into a renewable energy conversion, equipping the yacht with solar panels, and electric motors.

While the original catamaran came with some traditional solar panels, Richmond’s experience in renewable energy told him that would not suffice for his solar-electric yacht.

The Sunflare panels on the Ramblin’ Rose operate individually with their own bypass diode, so if one is shaded (by the sail for example), the rest still work.

Richmond also separated the solar panels into three separate zones, so if one side of the boat is shaded, the other two are still harnessing the sun’s power back into the boat’s batteries.

He also showed me how durable these advanced solar panels were, as I was able to walk around on top of them without worrying about breaking any glass or ruining them.

The panels help charge the electric yacht’s battery packs while out sailing and indicate to the captain when they are doing so.

To help power this vessel in and out of the marina and on the sea, Sunwater Marine’s president researched electric propulsion systems around the world, and decided that OCEANVOLT was the best option.

The software controlled variable system adjusts the pitch of each of the propeller blades automatically, so that the power generation and output are always optimal. This is much more efficient than traditional fixed propellers.

The electric propulsion is powered by a 48 volt system, meaning it’s safe to touch without electrical shock (an ideal situation for maritime fun).

Each electric motor on the yacht is powered by a bank of 12 Lithium Iron Phosphate (LFP) batteries on each side, 24 total. The batteries provide 21 kWh of power on each side of the vessel, 42 kWh in total.

Richmond explained that he positioned each battery pack eight inches off the bottom of the boat, too, so if any water were to come in, the batteries would still be OK. Furthermore, the captain showed me backup storage of eight additional batteries should anything go awry at sea.

The status of each and every battery is monitored 24/7 by a supervisory battery management system (BMS) that will shut the battery bank down, should any individual battery begin to malfunction. Fire is not something you want on a boat, despite being surrounded by water.

Additionally, the system was implemented to safely operate minimal electric functions under any conditions, so if the electric yacht were to tip over, there would still be power to send a distress signal.

Thoughts on the future of electric propulsion

After manning the helm of the the Ramblin’ Rose, there is a lot to be excited about for the future of electric propulsion at sea, especially on a gorgeous yacht.

The ride itself was eerily smooth and quiet compared to diesel motors, with zero vibration throughout the boat. If you didn’t look back and see the wake of the electric motors, you might not even notice the yacht was being propelled.

There is a lot of potential in electric propulsion, especially as it pertains to propellers than can remotely change their angle like the OCEANVOLT ServoProps. This makes reversing the electric yacht in particular, much easier for captains compared to fixed props built to push forward.

The ability to set sail and regenerate power from the propellers is also a huge perk and pairs nicely with the advanced solar panels. Plus, you always have shore power as a backup when you’re in a pinch.

From what I’ve seen, the biggest hurdle looking ahead will be battery capacity, and providing enough stored energy to power the electric propulsion systems on the yacht.

The solar panels do help a lot, but it’s a relatively slow process. Smaller, lighter battery options will be crucial for longer distances at higher speeds at sea someday. In the meantime however, we still have sun and wind to pick up the slack.

Currently, the range and top speed are still limited by this lack of surplus energy below deck. We didn’t take the Ramblin’ Rose above 7.5 knots (~8.6 mph) because we didn’t want to burn through all our battery life (that was also in respect to the charter setting sail after us that day).

The solar-electric yacht still has diesel motors onboard for emergencies, but Sunwater Marine’s founder agreed with me that we’d like to see a day when those motors are not needed at all. Unfortunately, the technology is not quite there yet.

Luckily, people like Richmond and Sunwater Marine are using their knowledge and resources (and personal funds) to figure this stuff out for the masses, while spreading the word about electric propulsion. It has become a genuinely viable option at sea, even if it is only in support of other forms of propulsion like sailing for now.

If you’re ever visiting the San Diego area, I highly recommend reaching out to Sunwater Marine and chartering the Ramblin’ Rose, or one of the other solar-electric yachts Captain Richmond is working on.