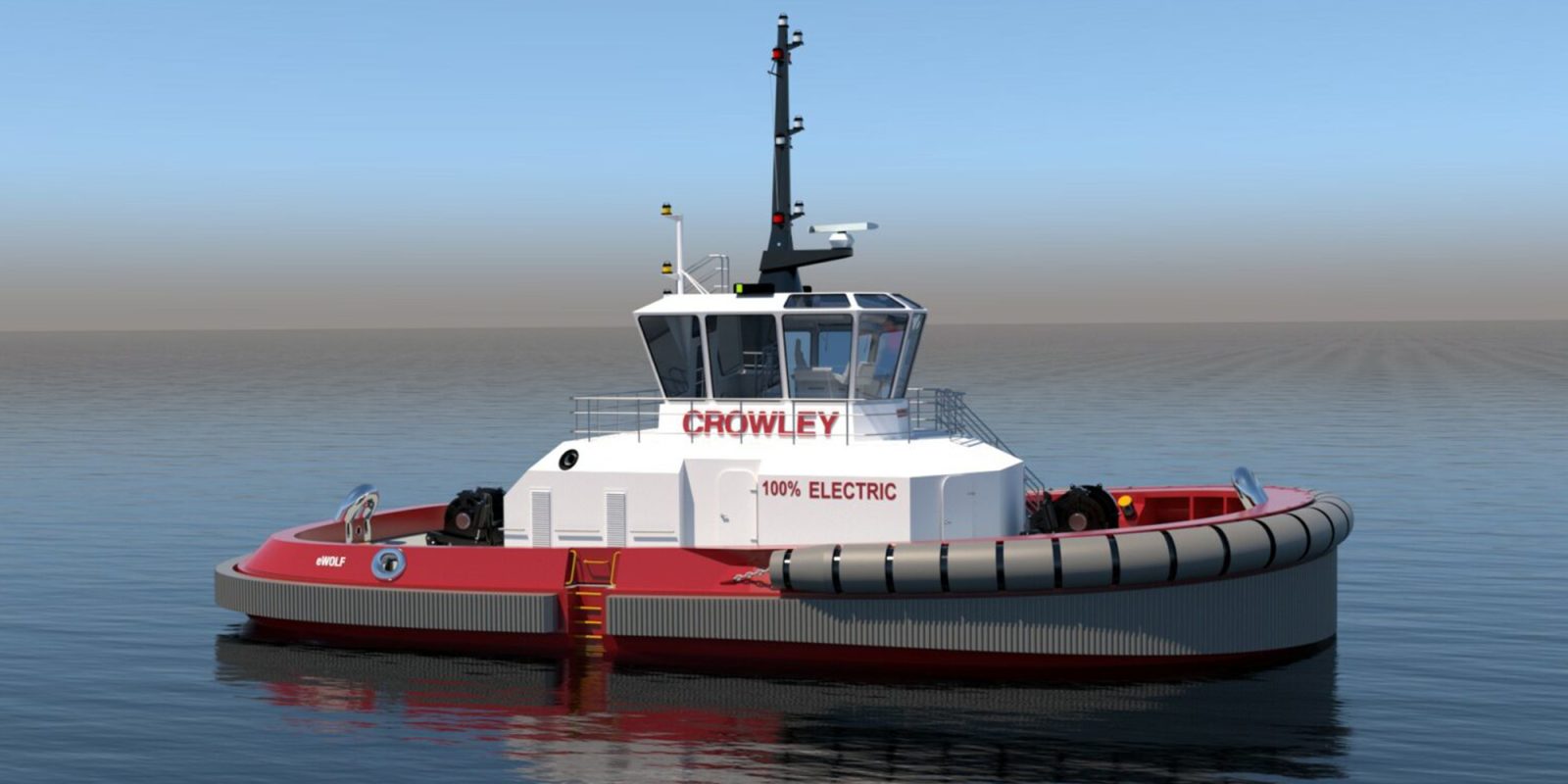 Crowley Maritime Corp. has announced an all-electric tugboat to serve the Port of San Diego. The eWolf will be first zero-emission tugboat in the US when it sets sail in 2023, hauling with it more than 6MWh of battery power. All without using a single drop of fuel.

Luckily, its marine division, Crowley Maritime Corp. has recently made efforts to forgo some fuel dependency with a fully electric tugboat.

In a recent press release, Crowley Maritime Corp. has unveiled the eWolf, an 82-foot, fully electric vessel, producing over 70 tons of bollard pull. For comparison, the average medium-sized port tugboat offers garners between 50-60 tons of bollard pull, according to Marine Insight.

That will come in handy, tugging large ships in the Port of San Diego when the eWolf launches in 2023. Company chairman and CEO Tom Crowley shares his thoughts:

The eWolf represents everything Crowley stands for: innovation, sustainability and performance. With this groundbreaking tug design, our team continues to embrace our role as leaders in the maritime industry while providing our customers with innovative and sustainable solutions done right.

One single eWolf can make a big difference

Per Crowley, there are some additional perks of going electric compared to a conventional tug. Over the course of the first 10 years, the eWolf electric tugboat will reduce the following:

The electric tugboat will also feature a fully integrated electrical package and AI technology provided by ABB to increase safety, efficiency, and provide sustainable performance. Lastly, the eWolf’s battery system will be charged at a custom designed station, located shoreside and developed alongside Cochran Marine.

This first-of-its-kind electric tugboat will starting tugging in mid-2023 with the help of several organizational partnerships including the San Diego County Air Pollution Control District, the California Air Resources Board, the Port of San Diego, the US Environmental Protection Agency and the US Maritime Administration.

All will provide resources and other financial support as the electric tugboat is developed for 2023. You can view the eWolf introductory video below:

The little (electric) tugboat that could! I’m no maritime expert, but 70 tons of bollard pull seems pretty on par with traditional fuel tugboats, if not a bit better? 6 megawatt hours of batteries sure help!

While Crowley as a whole is still very much involved in fuel and emission causing logistics, it does have several sustainability programs in place, and even earned a Marine Environmental Business of the Year Award. That being said, this isn’t a company that’s completely focused on zero-emission solutions, at least not yet.

The eWolf could be a cool feat of electrified technology when complete. Hopefully, its a big step for Crowley toward a fully electric path. Either way, I’m already marking my calendar to get down to San Diego in 2023, to try to hitch a ride on this thing. I’ll be sure to report back if I do.