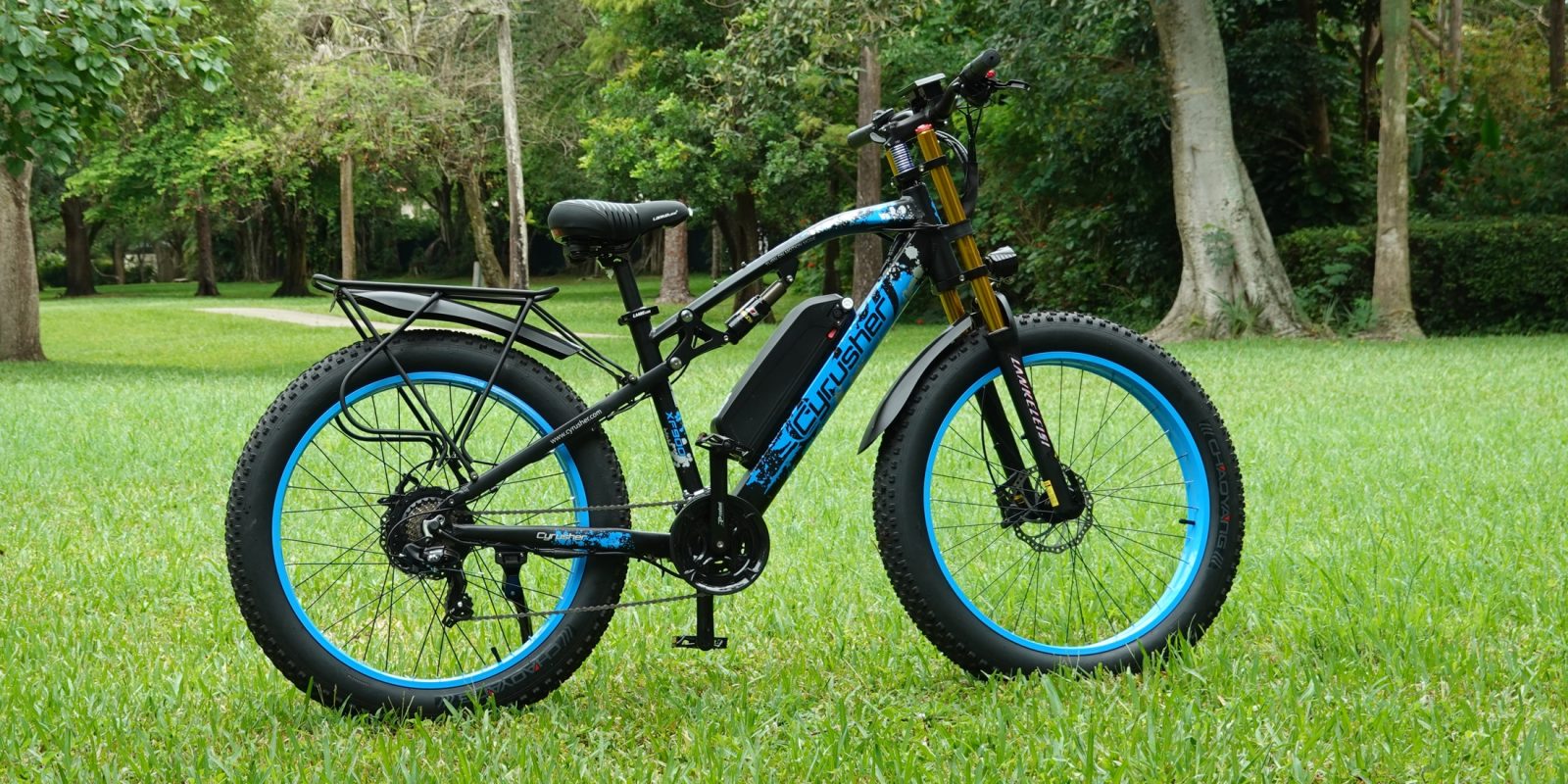 I’ve tested a few different Cyrusher electric fat tire bikes over the years, and they all have the same basic qualities: The fit and finish might not match the pros, but the bikes offer a fun helping of ridiculous excessiveness. The Cyrusher XF900 full-suspension fat tire e-bike might just be the most excessive yet, in all the best ways.

The Cyrusher XF900 launched late last year and is even larger in person than I had expected from the photos. It doesn’t just look massive – it is massive.

Between the fat tires and full-suspension, the Cyrusher is basically begging you to finally leave the asphalt behind and do some real exploring.

While I tested it with a fair amount of commuting-style riding, a lot of my adventures didn’t just head for the trails – they left the trails behind completely.

Take a look at how the bike fared in my video review below, then keep reading for my complete review!

An extra helping of parts

The rear hub motor is nominally 750W, but they’ve overloaded it to pull 1.5 kW of peak power. On a lighter e-bike that’d be crazy high, though on the heavy XF900 it’s just quite high. It’s not going to throw you off the saddle, but you’ll want to make sure you’re holding on tight when you blip the throttle or engage the pedal assist.

A cool feature that I don’t see very often is that the throttle’s power level is actually tied to the pedal assist level selector. With five levels of pedal assist, if you start in level 1 and mash the throttle to 100%, you’ll experience a gentle takeoff. In pedal assist level 5, the throttle gives you that jolt of power that many riders are looking for. Any number in between provides an increasingly more enthusiastic throttle response.

With a powerful e-bike like this, being able to tone down the throttle is a nice feature. It’s useful when you want to do low-speed maneuvering as well as when letting a friend try the bike when you aren’t so sure how familiar they are with powerful e-bikes. I can leave it in level 1 or 2 until I see that they aren’t going to whiskey throttle their way into a brick wall.

On the battery side of things, the company doesn’t mess around with puny 48V 10Ah batteries and they don’t even waste time with a 14Ah pack. They go straight to the 48V 17Ah pack to give the best range. That’s the kind of big battery you need when you’ve got a powerful motor and controller. They still advertise the silly range of 100 km (62 miles), but that would only be possible on pedal assist level 1 and with a tailwind. Expect a throttle-only range of a third of that, and a pedal assist level 3-ish range of maybe just over half the max stated range. This is a heavy bike with lots of rolling resistance, so it’s not going to be terribly efficient.

As I mentioned in the opening, this e-bike is really designed for exploring the unexplored.

The giant fat tires and suspension make it easy to hit obstacles you’d never consider on a hardtail e-bike with 2″ tires.

Both the front and rear suspension are middle shelf; they aren’t top notch parts like we find on e-bikes that cost nearly twice this much. But they’re good enough for recreational riding, which is exactly what I was looking for.

When the riding got seriously rutted out or technical, I definitely had to come out of the saddle. The suspension just isn’t plush enough for the really rough stuff. But by and large I could stay planted and have a great ride through dirt, gravel, high grass, and some light sand.

The powerful motor and the tires’ ability to pretty much float over anything means you aren’t limited to trails. I did plenty of riding through tall grass fields where I had no idea what I was riding over, but apparently it didn’t matter. I couldn’t see the ground but I could still roll right over everything.

The only thing getting in my way was the pair of derailleurs to snag grass and weeds. This is one of very few e-bikes to sport multiple front chainrings. The 21-speed setup is interesting, but it feels unnecessary.

The advantage of all of those gears is mostly on the low end, where you can drop into lower gears for more torque during hill climbing. But with a powerful motor like this, you don’t really need to drop so low since you’ll be climbing at faster speeds anyways.

The increased granularity also makes it easy to find the perfect cadence. But again, that just feels unnecessary on such a powerful e-bike. Maybe the purists will enjoy the increased gears, but I pretty much left the bike in a single gear the whole time: the highest one.

That’s because the Cyrusher XF900 is just so damn fast. It tops out at 28-ish mph (45 km/h), and it gets there on throttle-only riding or with pedal assist. Technically it’s not a class 3 e-bike if it can surpass 20 mph on throttle, but no one stopped me to ask and I didn’t volunteer that info to anyone.

At those speeds, the bike is an equally capable road warrior and trail tackler. I don’t often hit top speed on the trail, but the open road gives me the room I need to run fast. Back on the trails, if I hit the mid-20s of mph, I consider that pretty darn fast.

Nothing is perfect, and I have a few gripes about the Cyrusher XF900.

The fenders are as cheap as they come, though I get that fat tire fenders for a full-suspension e-bike are a hard nut to crack. The good news is the rear doesn’t flop too much because the rear rack holds it in place. The front gets a bit floppy, but what can you do? That’s cheap plastic for you.

Next, the front headlight is fine but the rear tail light frustrates me. It isn’t a typical e-bike light that runs off the main battery. Instead, its a saddle light that has its own battery. That means two main downsides: the battery will need somewhat frequent replacing if you ride at night often, and it will be blocked if you put stuff on the rear rack. I also found myself sometimes clicking the button when I moved the bike by lifting under the saddle. If I didn’t notice that I accidentally clicked on the light, it could run for hours during the day and drain the battery by the time I need it at night.

A torque sensor also would have been nice. The cadence-based pedal assist sensor is fine, but when you’re playing in the big leagues you start to want to see those nicer parts that make the riding experience just a bit more comfortable and responsive. At this price, a torque sensor would have been a nice touch.

Lastly, I’d say the price is a tough sell. At $2,799, this is one expensive e-bike. You certainly get a lot: high power, larger-than-average battery, fast speeds, full-suspension, hydraulic disc brakes, included rack and fenders, etc. But it doesn’t come cheap.

It’s actually evenly priced against several other full-suspension fat tire e-bikes in its class, but you have to really want all of these features to write a check that big.

From my time on the bike though, I can definitely say that this is one hell of a ride. Being able to explore everything from the concrete jungle to an actual jungle, and doing it for more than just a few miles, is an experience that I hope everyone can have at some point.