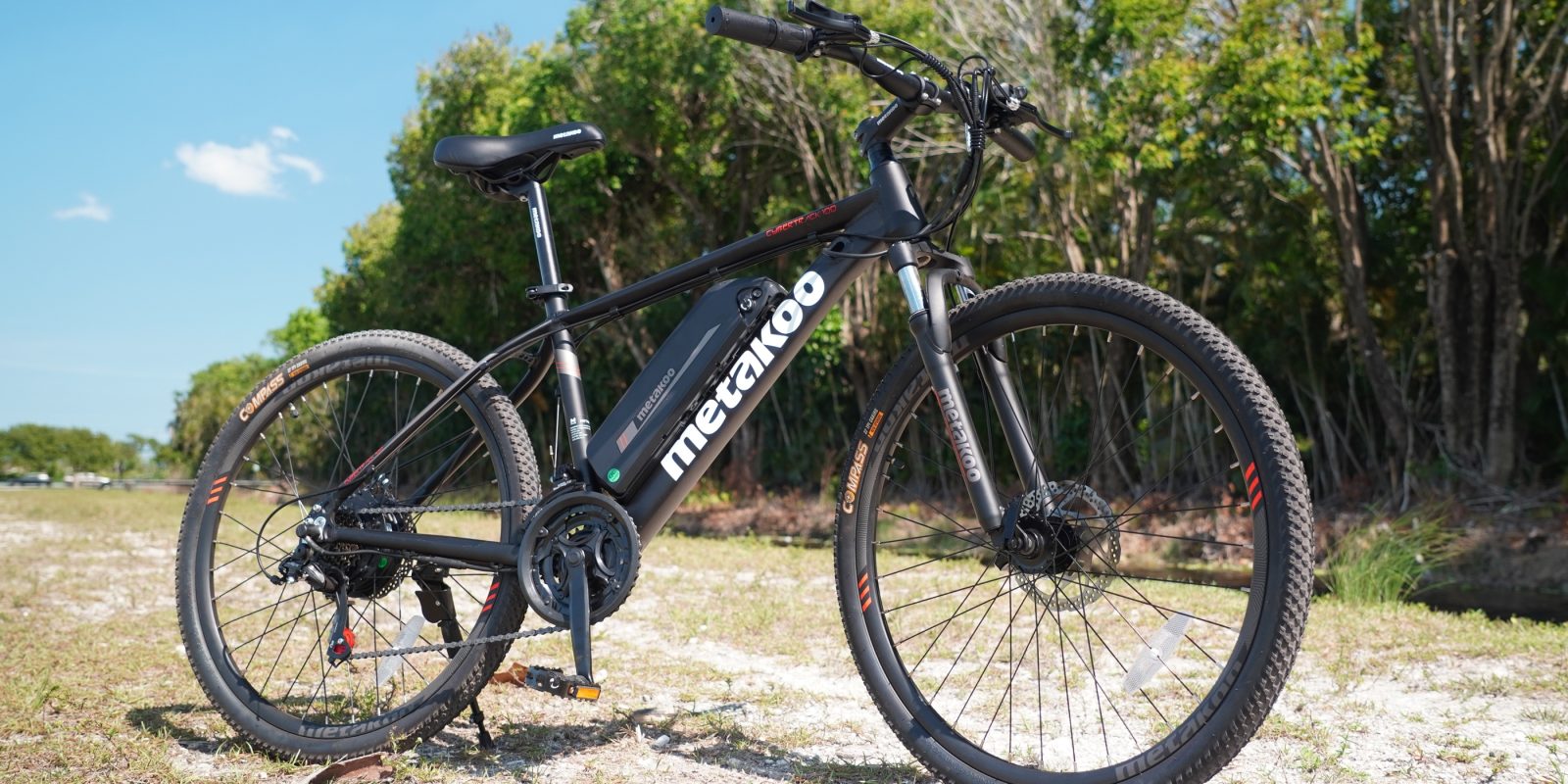 Metakoo is a fairly new e-bike brand that was spun off by the same company that brought us the MacWheel series of e-bikes that we enjoyed testing late last year. These bikes aren’t known for being top shelf (or even mid-shelf), but they do present strong bang-for-your-buck in the entry-level class. The company’s first model, the Metakoo Cybertrack 100, offers a quasi-mountain bike format designed for price-conscious consumers.

Check out my video review below of the Cybertrack 100 to see this e-bike in action!

I’ve reviewed all sorts of e-bikes, from fancy and expensive e-bikes to bargain basement models. This is very much the latter, thanks to its budget price of just $799.

So you have to go in with realistic expectations.

This isn’t going to be an overly powerful e-bike or a super long range e-bike. We know that before even tossing a leg over the bike. With a 350 W motor and 375 Wh battery, these are very entry-level specs.

But with that frame of reference, we can judge the e-bike within its class to see if it’s worth the money.

And spoiler alert: It’s a pretty decent e-bike when looking through that lens. It won’t win any races against the more powerful options out there, but that’s not what this e-bike is for, either.

To me, this is a low-cost way to get into off-road electric bike riding.

Not serious downhill riding or hitting any sweet jumps, but rather some good old-fashioned trail riding on an e-bike that will give you a nice boost to help you go faster and farther than you’re used to.

This is one of the few e-bikes I’ve tested (out of hundreds!) that has a front derailleur in addition to the rear derailleur. That gives it a whopping 21 speeds.

To be honest, that’s about 14 more gear ratios than I think is really necessary. If you are so refined in your cycling that you need two gears in between every gear us casual 7-speeders are used to, you’re also probably not interested in a cheap e-bike.

I don’t think most people really need this level of gradation in their e-bike drivetrain. It’s one thing on a pedal bike, but with the motor assistance, you can be a little less optimized with your gear ratios – you don’t always need the exact perfect ratio for every single incline. But for those that do want more choices, the Metakoo Cybertrack 100 certainly doesn’t hold back.

The pedal assist uses a cadence-sensor, which doesn’t give as good of a response as a true torque-sensor, but it works just fine for our entry-level ride here.

I also really like that the bike has a half-twist throttle instead of a thumb throttle. I hate when off-road e-bikes come with thumb throttles, because they’re hard to hold in one position when terrain gets uneven since your thumb is bouncing up and down along with the bike. But half-twist throttles are perfect for that scenario, since your palm grips both the throttle and the non-moving grip next to it, maintaining your throttle position.

I appreciate that Metakoo didn’t cut the usual corners and install a bunch of cheap parts like plastic pedals. There are real alloy pedals that are nice and toothy to stay under your shoes while bouncing around on the trail.

The company even went the extra mile to include a 4A charger, which is around twice as powerful as most budget e-bike chargers. A 4A charger paired with this battery means you can get a full charge in barely three hours.

That being said, corners were of course cut in some places to get down to this $799 price. The welds look about as pretty as Rocky at the end of the first movie. There are no lights or fenders, which means you’d need to add some parts to this bike to turn it into a commuter. And the suspension fork is acceptable but not at all high-end.

There are better bikes out there for commuter use, so I’m not sure this is the one you’d want to buy for daily road riding, and thus the lack of lights and fenders don’t bother me too much.

Everything else on the bike pretty much screams “good enough” to me. The brakes are fine, not fancy. The saddle is acceptable, not stellar. The frame is fine, not overbuilt but fine (and at least it has partially internal wiring). The shifters are fine for this level of e-bike.

It’s all acceptable for a leisurely, fun e-bike designed to get someone out of the house and onto the road or trail.

You’re likely giving up some serious service and support by going with a fairly young Amazon company based in China, but you aren’t giving up too much in quality. And if I had to choose one, I guess I’d rather have a decent e-bike with a company that’s harder to contact than a crappy, falling apart e-bike with a company that I can talk to any time I want. The former keeps me in the saddle, while the latter keeps me hearing the phrase, “We understand this is frustrating to you…”

So for a pretty decent e-bike priced under $800, this is actually a nice option in the off-road and trail riding categories. It’s not too heavy on the back or the wallet and it offers up a decent amount of performance for the price. And that’s all many price-sensitive buyers are looking for.