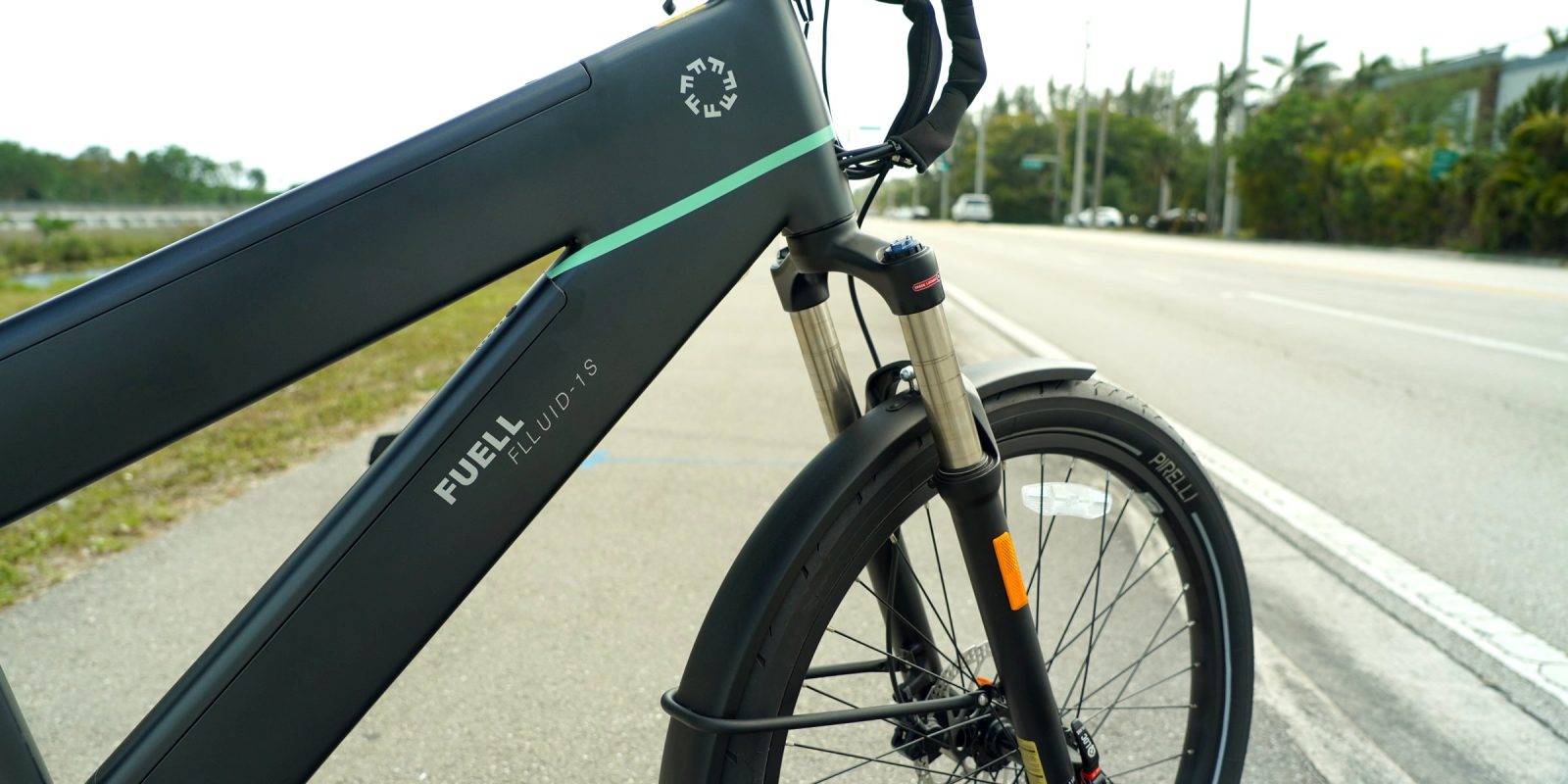 I’ve watched in fascination as Erik Buell’s latest two-wheeler company, Fuell, unveiled and then began deliveries on a high-end electric commuter bike. Now that the company let me borrow a Fuell Flluid for a test ride, I can finally tell you what I think of the bike.

Due to a series of tight schedules, the company and I could only align for a few hours, but I made the most of the time.

Armed with one Fuell Flluid and one pretty awesome Fuell-branded helmet with built-in face shield, I was off for the races as soon as they rolled the bike out of the van.

I even managed to grab enough footage during my testing to put together a fun first ride video.

You can check it out below, then keep reading to hear my detailed thoughts on this electric bike built by a motorcycle designer.

I’ve ridden a lot of e-bikes, and their quality level has run the gamut. I’ve tested fancy $10K e-bikes and cheap $500 e-bikes.

The Fuell Flluid falls in the middle of that range, with a current price of $4,995 – up slightly after pricing pressure in the industry has been forcing prices higher across the board. But the quality of the bike pushes it further up toward the fancy-pants end of that spectrum.

The bike was designed by legendary motorcycle builder Erik Buell, and he wasn’t messing around when he chose this nice suite of parts. It’s easy to try and save a few bucks here or there, but the Flluid didn’t skimp.

The Fuell Flluid doesn’t have a throttle, which keeps it classified as either a Class 1 or Class 3 e-bike, depending on which model you choose.

The custom motor features a torque sensor that helps create a comfortable, responsive pedal assist system that basically feels like you’re pedaling a typical bike (albeit a bit of a heavy one).

It doesn’t rocket off like a typical throttle e-bike, but the power is palpable if you put it in higher pedal assist. This is definitely an e-bike for people who enjoy the act of cycling though. If you’re searching for a moped, look elsewhere.

Complimenting the smooth pedal assist is an equally smooth Gates carbon drive tied into an internally geared rear hub. That Shimano Alfine 8-speed is a thing of beauty. I’m firmly convinced that a mid-drive motor and internally geared hub transmission are pretty much the nicest way to ride an e-bike. And if you can slip a belt instead of a chain in there too, then all the better!

Interestingly that seems to be a consensus among motorcycle manufacturers-turned-e-bike-builders. Harley Davidson’s electric bicycles also went with the trifecta of a mid-drive with a Gates belt drive paired with an internally geared hub. Motorcycle manufacturers must know something e-bike companies don’t, or they’re just more focused on the ride experience than the price.

Even though the Fuell Flluid retains the pedal feeling of an e-bike, the handling almost feels more like a motorcycle. It’s just so smooth and planted that I feel like I’m riding more of a roadster motorcycle than an e-bike sometimes. Maybe it’s the geometry. Maybe it’s the grippy Pirelli tires. Maybe it’s all the nuances that I’ll never even know exist but that go into the bicycle design process to create that feeling. Whatever it is, the team at Fuell have absolutely nailed the ride quality on this thing. It’s an odd mashup of a 100% bicycle-style ride but the feel of something more planted.

Generally speaking, I’m blown away by the ride and the quality of the Fuell Flluid.

But of course no e-bike is perfect.

Even though the dual batteries give the bike incredible range (helped even further by the lack of throttle), they also make it heaaaavy. I’m talking 36 kg (79 lb) heavy.

You feel the weight a bit while you’re riding, but it isn’t a deal breaker. I suspect the higher of the two batteries is what I’m feeling more as it creates a bit higher center of gravity that is more noticeable at slower speeds. But the bigger issue is when maneuvering the bike. I helped Fuell’s guy Robert get the bike in and out of the van. It could be a one man job, but it’s easier with two.

The point is this isn’t a lightweight bike so don’t plan on throwing it over your shoulder like a road bike.

It’s also still a bit pricey, even if the bike absolutely warrants the price. I think the price is fair, but it is still going to price out those who aren’t ready to spend what is likely a good chunk of a month’s pay on an e-bike.

But if you have the cash and want to invest in a high-quality e-bike that will withstand the test of time, and that rides like a dream, the Feull Flluid definitely gets two thumbs up from me.

I wasn’t sure what to expect when I heard Erik Buell would build an electric bicycle, but I should have known that he’d knock it out of the park.