Macwheel Wrangler 600 e-bike review: Can you get a good electric mountain bike for $850? 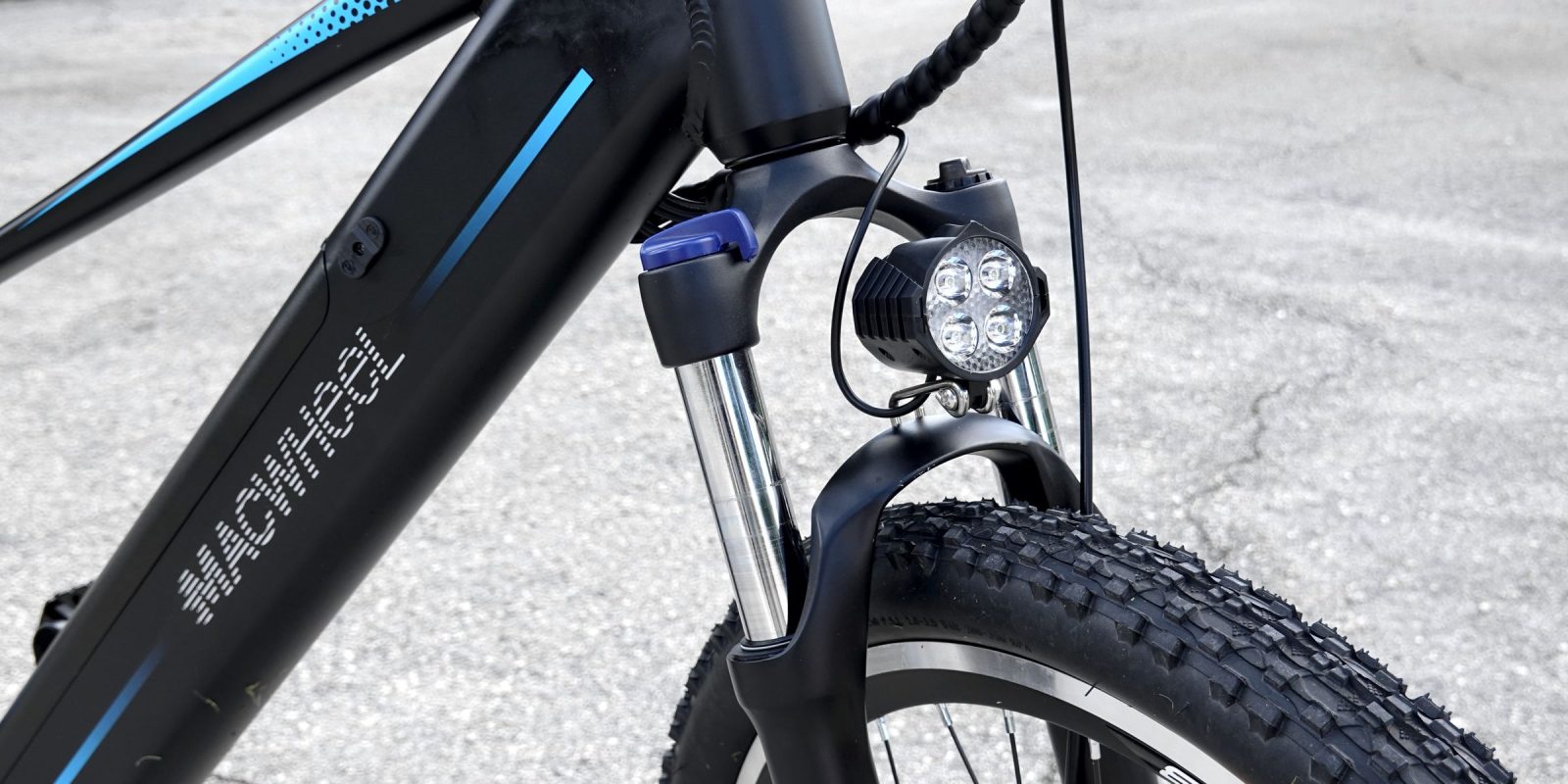 The Macwheel Wrangler 600 is an electric bike from an up-and-coming budget brand found on Amazon. Today we’re going to find out if you can get a decent ride out of a budget electric mountain bike.

Watch my short video review below to see the MacWheel Wrangler 600 in action!

Let’s start with the design and components

That means it’s not really designed for tearing up and down mountain trails. Could it do it? Probably. Would it be the best choice for that type of riding. Absolutely not.

This e-bike is for all intents and purposes a commuter bike, and so that’s how I’m going to judge it.

While the bottom-end Shimano 7-speed drivetrain probably wouldn’t cut it getting bashed against rocks all day, it’s plenty for commuter work.

The same goes for the typical Tektro mechanical disc brakes. They aren’t fancy all the way down there at the bottom end of Tektro’s hierarchy, but they’re name brand and they work just fine.

The Kenda tires are fine, the included LED light is fine, the suspension is fine for basic road riding, it’s all pretty much fine. Not fancy, but it gets the job done without being bargain basement, no-name el-cheapo parts. It’s all decent and nothing more, which is exactly what we found on the last Macwheel e-bike we tested. It’s consistently decent.

There are a few niceties in the design such as internally routed wiring and the integrated battery. Both are generally reserved for mid-tier bikes, not budget level bikes.

Hell, Rad Power Bikes still isn’t doing integrated batteries. But while the Macwheel Wrangler 600 has an edge there, it’s one of the only areas where it edges out some objectively better e-bikes.

The takeaway message in terms of components and build is this: the bike is decently made and won’t fall apart in a few months, but it’s not a tribute to high design either.

While I’m lukewarm about the components, I’m actually pretty pleased with the performance.

I expected the bike to peter out as it approached 32 km/h (20 mph) like a typical Class 2 e-bike, but I was pleasantly surprised to see the speed keep climbing to nearly 36 km/h (22.5 mph). It’s not a huge difference, but every little bit past 20 mph helps to make an e-bike psychologically more comfortable on faster roads so you spend less time getting passed by traffic.

The power is certainly stronger than the last 350W Macwheel e-bike I tried, which makes sense considering the 500W motor and 48V system on this bike.

The pedal assist isn’t the smoothest I’ve tried, but it works just fine and keeps me honest when I choose to forgo the throttle and get some exercise.

The 480Wh battery doesn’t net me the full range they promised me on throttle-only, but it gets about two-thirds of the way there at quite close to 34 km (21 miles). With pedal assist, the range bumps up closer to the 48 km (30 miles) that the company claims.

The mountain bike-style geometry has you in a fairly sporty ride position and the bike feels quite nimble, especially for the larger 27.5″ wheels. I would love to see a set of fenders or a rear rack included to give more urban utility, but those are accessories that can be added later.

Anyone looking for a laid back cruiser should check out Macwheels’ other models since this one is designed for riders who like a more traditional mountain bike stance.

I may be giving the Macwheel Wrangler 600 a bit of a hard time here, but that’s because I’m used to comparing e-bikes that easily cost twice as much as this budget offering.

When I remind myself that the Wrangler is priced for the e-bike equivalent of a song, the picture starts to look rosier.

Ultimately, it’s a fast and modestly powerful e-bike that offers a traditional biking feel. And that’s perhaps its most important feature.

When people ask me for the best budget-level e-bike and want to stick to 3-digit prices, I usually recommend something like the $899 Lectric XP. The only problem is that some riders don’t want a folding e-bike or a fat-tire bike or small-ish 20″ wheels.

The Macwheel Wrangler 600 solves that problem by offering a more familiar mountain bike-style ride while hitting a similar price point.

It’s not the best mountain or commuter e-bike I’ve ridden – at least not on an absolute scale. But it ranks quite nicely on the value scale thanks to its sensible pricing and decent-level components. It’s an upgrade over something like an even-more-budget-level Ancheer, yet won’t do too much more damage to the wallet.

What do you think of the Macwheel Wrangler 600? Let us know in the comment section below!