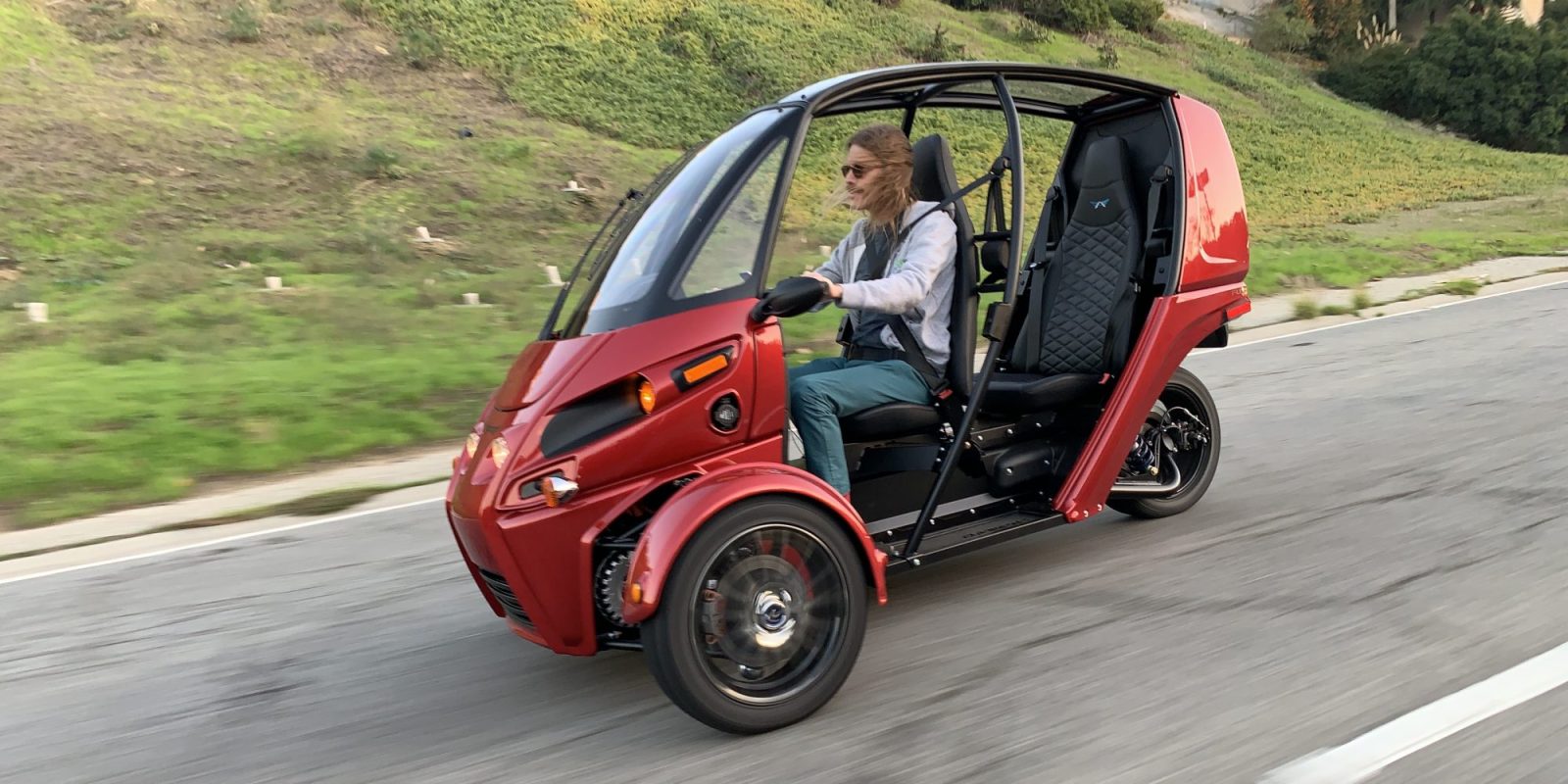 Arcimoto has finally started deliveries of their three-wheeled “Fun Utility Vehicle,” and we caught Arcimoto CEO Mark Frohnmayer on the tail end of a cross-country tour for a short ride through Los Angeles.

We’ve driven the Arcimoto before, but those were earlier versions and shorter rides. Now that we’ve had a chance to try this fun little thing out on real roads (and in real traffic), here’s how it was.

To begin with, I must note that I’m not a motorcycle rider. So I won’t be able to compare the experience of this trike with a motorcycle, but rather with cars. And speaking of motorcycles, you might be required to have a motorcycle license and/or wear a helmet to drive one of these, so check your local regulations.

Our sunset ride began during LA rush hour, so we certainly did not have the road to ourselves. But we did get enough space to get a good test of the vehicle’s capabilities in typical city driving scenarios, even up to 55 mph.

Those typical driving scenarios, as you can see in the photo below, included plenty of smog. The AQI was not much higher than normal, which is to say, it was dangerous for sensitive populations. It quite often is in this fossil-burning world of ours.

Driving in an open-air vehicle does produce a little bother in this respect, because you’re not too far from the exhaust pipes of the cars around you, and have to breathe whatever they’re spewing out. On the upside, at least you’re not spewing more of it for the people behind and next to you, so that’s a plus. 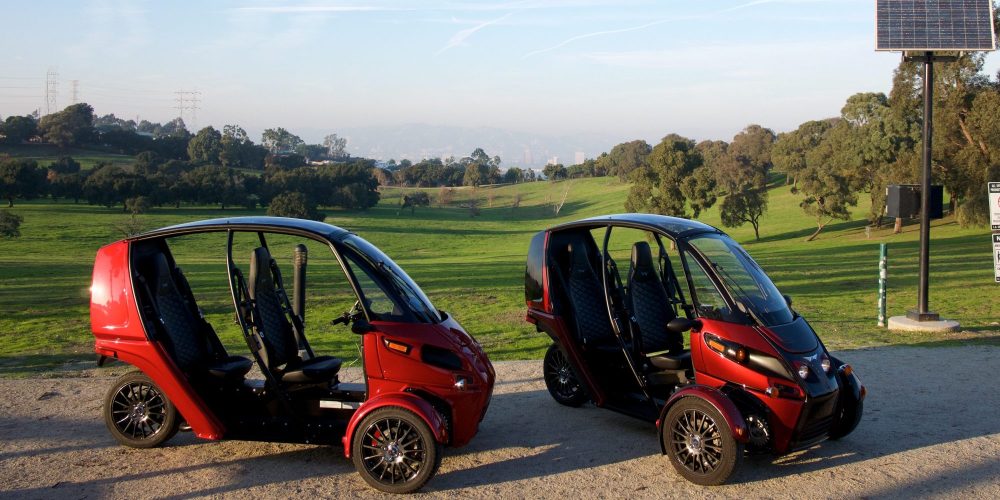 And in a world where we all drove vehicles like these, breathing all that crap from tailpipes wouldn’t be an issue. So maybe we should think about that.

Speaking of efficient vehicles, the Arcimoto is rated at 173MPGe — about half again as efficient as a small electric car, most of which get around 120MPGe.

The top-spec “Evergreen Edition” has a 20kWh battery pack that develops 81 horsepower — enough to get to 60 mph in 7.5 seconds and a top speed of 75mph. That 20kWh will get you 100 “city” miles of range on a charge. On the highway, you won’t fare so well, with 66 miles of range at 55mph, and 32 miles at 70mph. Aerodynamics are not the strength of non-enclosed vehicles like this one.

There will be a future base model available with a 12kWh battery and 70 miles of city range. Arcimoto also plans to offer a larger capacity as an option at some point in the future.

That 81 horsepower seems like plenty for this little thing. It felt like it had plenty of oomph, even accelerating to ~60mph up a hill on an arterial city road. Torque delivery is very smooth. It won’t throw your head back, but we’re not competing with superbikes or AWD drag-strip cars here anyway.

Handling takes some effort — it’s not as easy as turning a powered steering wheel. But with three wheels it seems planted enough. I tried to wiggle the vehicle at medium-high speeds and it didn’t feel wobbly.

The FUV has a built-in info screen that gives you all the most important stuff you need to know front-and-center.  But it’s just “info,” and no “-tainment.”

The latter is provided by your own cell phone, and there’s a handy cell phone holder in the center of the handlebars. Rather than including a GPS nav system with the FUV, you’re expected to just use your own phone. Of course there’s a USB outlet so you can sip off that big battery to keep your phone topped up.

It’s possible that Arcimoto might add some more capabilities to the system in the future. Right now the software is still in progress, and the vehicle isn’t capable of over-the-air updates, but will have that capability “soon.” 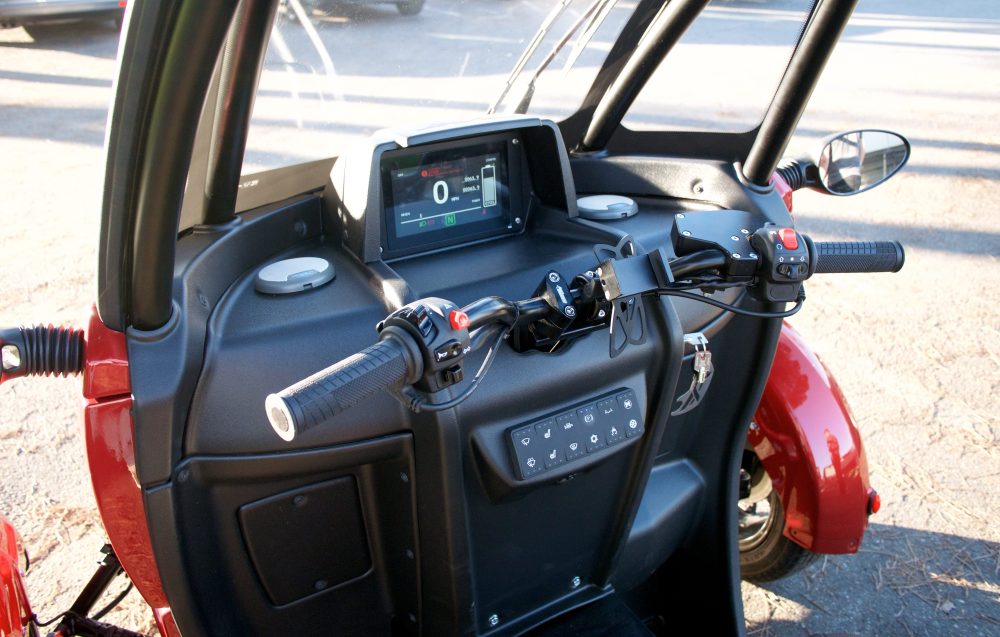 The driving controls on the vehicle took a little getting used to for someone who is used to a steering wheel and pedals, but it didn’t take too long before I felt confident enough to react quickly to normal driving situations. The various buttons are a little bewildering at first, but with a little coaching or a few minutes of manual reading, it shouldn’t be too hard to figure out.

Braking is accomplished through a regen lever on the right handlebar, similar to a motorcycle hand brake, or through mechanical brakes on a right foot pedal.

And the turning circle is a little larger than I’d like. The fenders make contact with the body at maximum steering angle, which limits you from making tighter turns. Parking might take a little practice, but since the vehicle is so small, it should be much easier than finding a place to stow a whole car.

For people who use this car as an around-town supplement to a normal car, and who don’t otherwise use motorcycles, it might be nice to give yourself a little practice getting used to the controls in a docile environment before braving the mean streets.

The nice thing is that the Arcimoto will certainly be safer than a motorcycle.  Three wheels are much more stable than two, and the FUV comes with not one, but two seatbelts, intended to both be buckled across the chest of the driver.

The vehicle’s structure is also quite strong, plus it has crumple zones for crash absorption, which is a big benefit over two-wheeled transports that have no structure above or around the driver at all.

Finally, perhaps the best safety feature is how weird it looks. And when something looks weird, people are going to notice you’re there, which helps to avoid accidents.

Here’s the deal: The Arcimoto turns heads. You knew this already just by looking at it, but the interesting part is that it actually affects how you drive it. 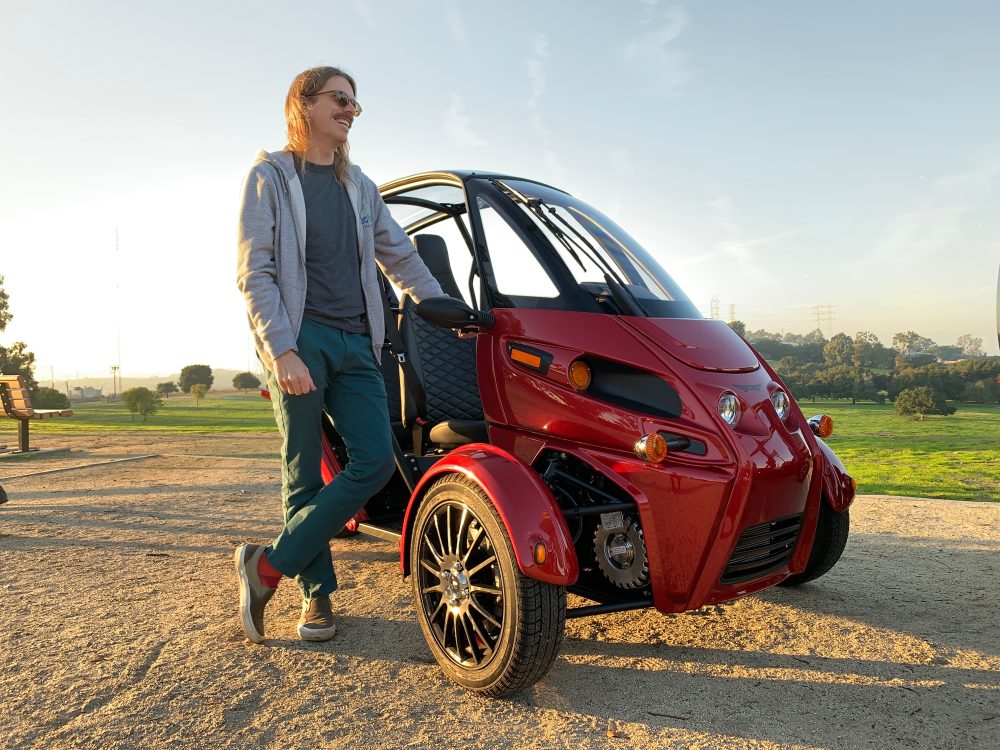 At first, I was a little worried that an inexperienced rider in a small, quiet, unenclosed vehicle on unfamiliar city streets during rush hour might be a bit of a sketchy situation. But very soon into the drive, I noticed that I had a ton of space everywhere I went on the road.

Part of the reason was because the FUV is small and doesn’t take up a lot of room in the lane, and another part is because literally everyone around me knew I was there. And they all seemed to be making some room for the two weird cars they’d never seen before.

But it wasn’t just looks, it was comments. The open sides and quiet operation invited comments from other drivers and passersby.

Driving through a residential neighborhood, a woman walking her dog said, “Holy shit, that thing’s awesome!” Pulling up at a stop light, a driver in a blacked-out-and-dinged-up BMW X6 M rolls down the window and asked, “What is that thing and how much does it cost?”

And all through the drive, it was easy to have casual conversations with Frohnmayer, sitting side by side at a stoplight in matching electric tricycles, with no loud pipes to yell over. Downsides of the open design: The air was chilly on our ride, and I could certainly feel it in my knuckles. Despite the FUV having a windshield, plenty of wind gets around the sides. For the longhairs among us, that’s also an issue. Of course, proper clothing (hat/helmet, gloves, etc.) is a simple-enough solution to this problem. 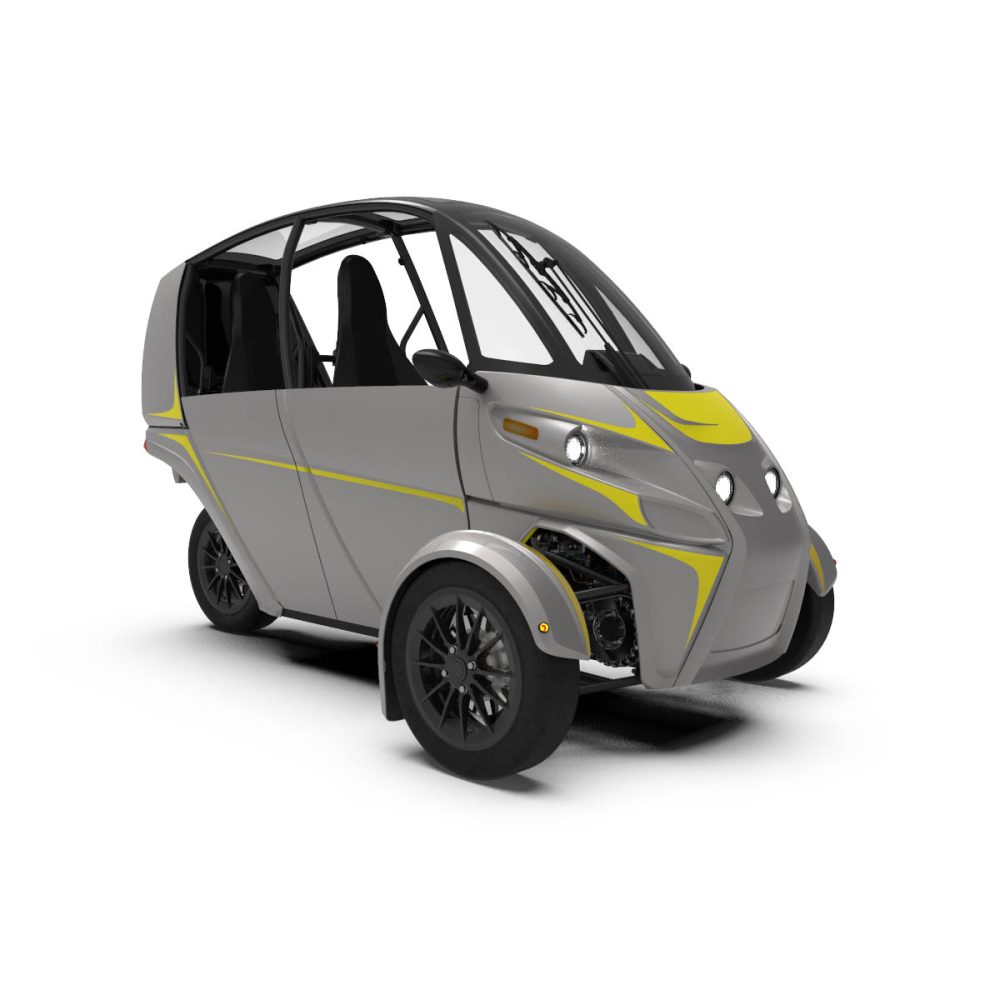 There will also be optional removable doors to enclose the sides of the vehicle, which should cut down on this wind effect. And heated seats and handgrips are available on higher-option vehicles, including the one I drove (a fact that I unfortunately learned after our somewhat chilly drive).

The Arcimoto FUV is currently available in “Evergreen Edition” trim, a top-tier model for early adopters. It starts at $19,900 and includes a lot of features that won’t come standard on the future $11,900 base model.

Both of those prices are before federal EV tax credit if you’re in the US, which was recently extended for two- and three-wheeled electric vehicles through the end of 2020. This will get you 10% back on your purchase, up to $2,500. 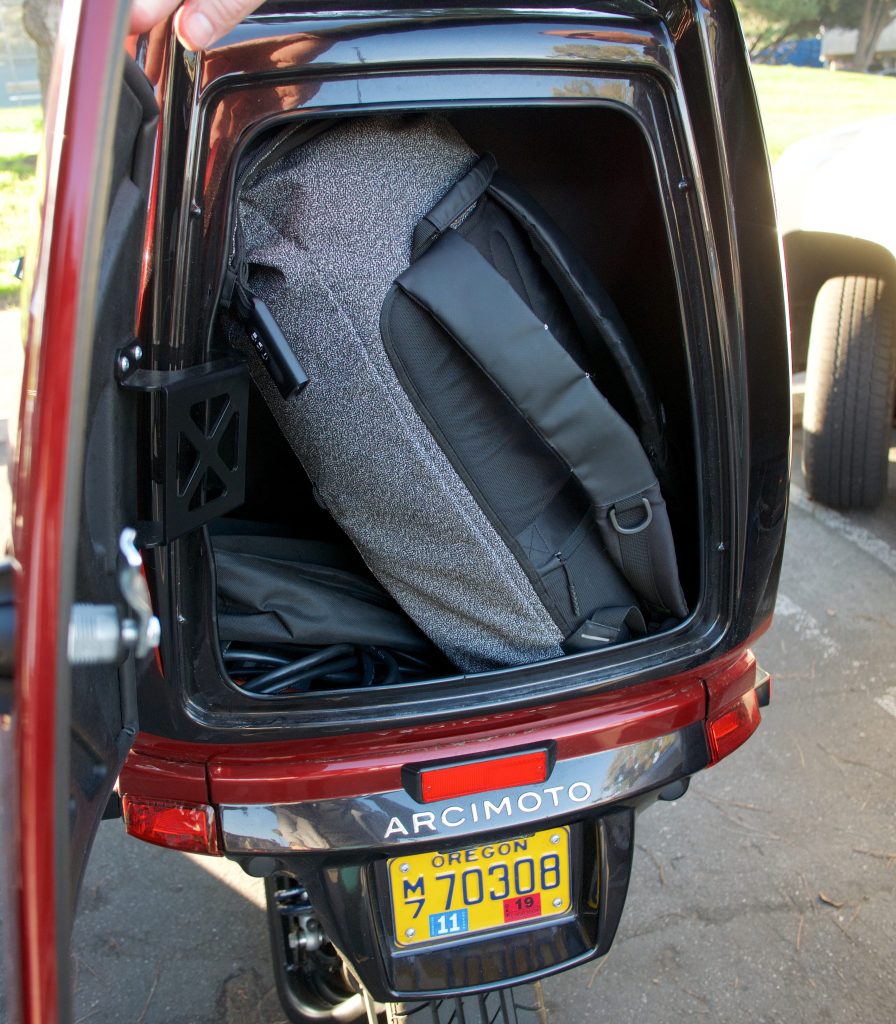 Lockable rear storage is a great boon in a motorcycle-like experience, as backpacks or helmets or maybe a couple bags of groceries can be held in the back. This really adds utility to the car for small errands.

The level 1 charging cable is good enough, especially if this more of an occasional-use, run-around-town vehicle. But if you need to fill up from empty, a level 1 charge will take you about 15 hours. A level 2 charger will take a bit over three hours, so that might be a worthwhile upgrade for FUVs that see a lot of use.

Arcimoto has only started deliveries of the FUV to West Coast states: California, Oregon, and Washington. So far, they’re only delivering the top-spec model to pre-order customers, and making about eight FUVs per week. They’ll continue at that rate for months, but by the end of this year they hope to reach a production rate of around 200 per week, or 10,000 per year. Once Arcimoto reaches the 10k production rate, that’s when they plan to start offering the base model.

In terms of sales, Arcimoto will sell to individual consumers, and is planning fleet sales in vacation destinations in the Sun Belt. They’ve already started delivering to some rental fleets in Key West, Florida. With an open cockpit and ease of parking, Arcimoto sees this as an ideal rental vehicle for getting around in beach towns or other quiet, natural areas:

Arcimoto has other models in mind, too. They’re planning emergency and delivery vehicles. These will work well, particularly in congested cities. Small delivery vans similar to these are quite common in European cities, and will become more common as more cities adopt ICE car bans and congestion pricing.

So they have plenty of directions to go, but we’ve yet to see what will be the most lucrative for them, or indeed, how many buyers they’ll be able to find for their quirky fun-mobile.

If you’re thinking of getting an Arcimoto, you can head over to their website to place a $100 pre-order. 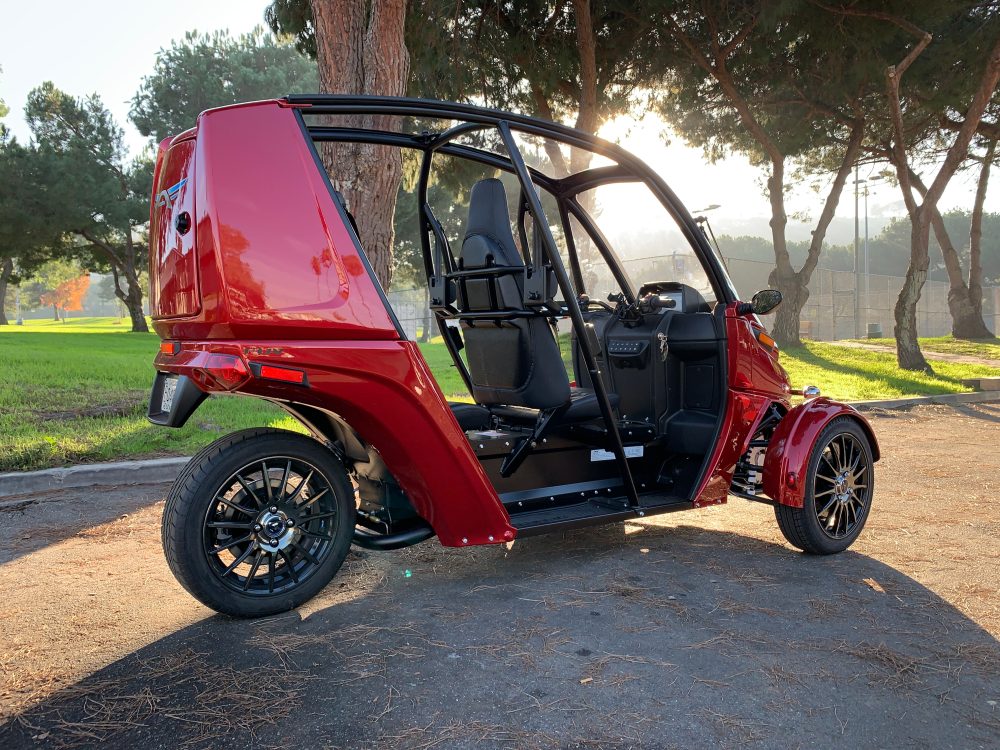