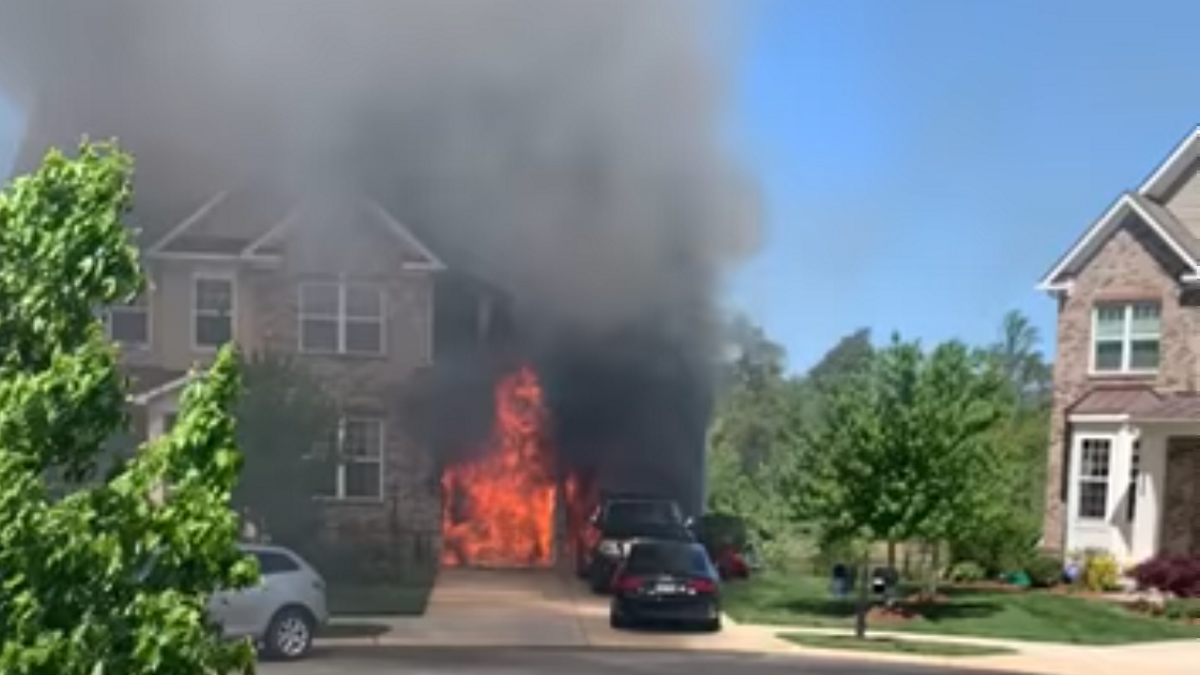 A Chevy Bolt is ablaze in a garage near Ashburn, Virginia
0

There were 6 Chevy Bolt fires last year that led to a recall, and the ink is still wet on the “final fix” announcement. Today news comes of another Chevy Bolt fire that occurred in Ashburn, Virginia on May 1st. We always note that electric vehicle fires are many times rarer than internal combustion engine fires per car even if there is an issue like this.

This gives us an odd feeling of deja-vu, as Hyundai also had a temporary fix in place when another one of their Konas caught fire. This lead to the decision to replace all batteries, and stop selling the Kona entirely in Korea.

By the looks of the video (below), seems to be in a cul-de-sac sometime between 10am and 2pm. Fire quickly spreads from the bottom of the Bolt to the rest of the garage. The exact location and circumstances are unknown at the moment.

Inconceivably the garage and house were saved with what looks like relatively minor damage, and nobody was injured. Images of the aftermath are below. The firefighters servicing this area are from the Ashburn Volunteer Fire and Rescue Department. Sincere congratulations and gratitude goes out to all firefighters. Especially those who volunteer to do this, and clearly do such a good job at it. Thank you!

The cause and circumstances behind this are yet unknown, but this article will be updated once more information is available.

The battery software-only “final fix” was just announced for the 2019 model year. We still have to wait another month for the 2017-2018 update to be released; those model years are not as protected right now. With that, the fires are fresh in everyone’s mind. The big question remains: will a software fix be able to prevent more Chevy Bolt fires?

The temporary fix that was available limits to 95% of a full charge. This is ostensibly to prevent the situation where the fire can occur at or near a full charge. If this vehicle had the fix applied, it will serve to undermine confidence in the fix.

It is extremely unlikely that the Bolt owner was able to get the final fix from Chevy in just the past few days and as we stated, it is currently uncertain if the owner either did the 95% or “top of hill” limiter on charging. But this is a good time to bring up the benefits of OTA software updates. If this were a Tesla, the update could have come over the air to make this car safer.

We reached out to GM for comment about the Chevy Bolt Fire. While the are investigating, they said:

GM is aware of the incident, and an investigator is in the process of learning more about the specific situation of the vehicle.

Unfortunately no more details are available. We will update once more information has been provided.

The first question, of course, is: Did this Bolt have the temporary (or final) fix applied? The temporary fix limits the charge to 95% of (the previous) maximum. We were told that this would be enough to be safe.

This could have been a Bolt that was fully charged and did not have either fix in place.

Or, this could be something entirely different like a fire started outside the Bolt or foreign object previously penetrating the battery box.

While GM has alerted all owners multiple times via mailers and phone calls, many have chosen to ignore the risk and not have the fix applied. A few we asked cited the desire to retain the option to have full range when needed. GM recommends in this case to self-limit the charge. Either use “hilltop” mode (about 88%) on the 2017-2018, or set the target charge level to no more than 90% (on the 2019 model year).

Either way, the big question remains: Will the software update be enough protect against these fires?

The majority of the Chevy Bolt EV Owners Facebook group have faith that GM will provide a fix that will solve the problem. A sizeable minority polled, however, seem to believe that it is a hardware problem, and that software alone can’t fix it. Hyundai had a different problem, but opted to replace all their batteries instead of trying the software route. Perhaps GM should have done the same?

The other major question is: if the software fix can’t protect against a fire, will it at least warn the owner? It’s probably safe to say that the software will be able to at least detect some situations that could lead to fire, and hopefully warn if a situation occurs that cannot be controlled. With their OnStar telematics, it’s possible to alert the owner and possibly authorities. In these situations, seconds matter, so proactive notifications could literally save lives.

The timing on this couldn’t be worse. While we don’t know if the Bolt had either fix applied, this is sure to reignite the debate about the software fix, and rattle people’s faith in it. The last thing they needed right now was another Chevy Bolt fire.

Assuming that it did have at least the temporary fix, or the self-imposed charge limit applied – this is very bad. If GM’s assumption that this occurs at or near full charge turns out to be incorrect, the fix that they are attempting might not be either.

All told, however, car fires happen. With 174,000 fires alone (in 2015) in the Unites States, that’s about one every 3 minutes. No matter how safe you make a vehicle, it always has the chance to catch fire.

While we don’t have the numbers for GM, proportionally about the same number of Teslas had caught fire as Bolts. The resulting numbers should thus be close to being the same – that is about 10x more likely for a gas car to catch fire than a Bolt.

What do you think? Does this latest fire change your opinion on buying or driving an electric vehicle or a Bolt? Let us know in the comments.