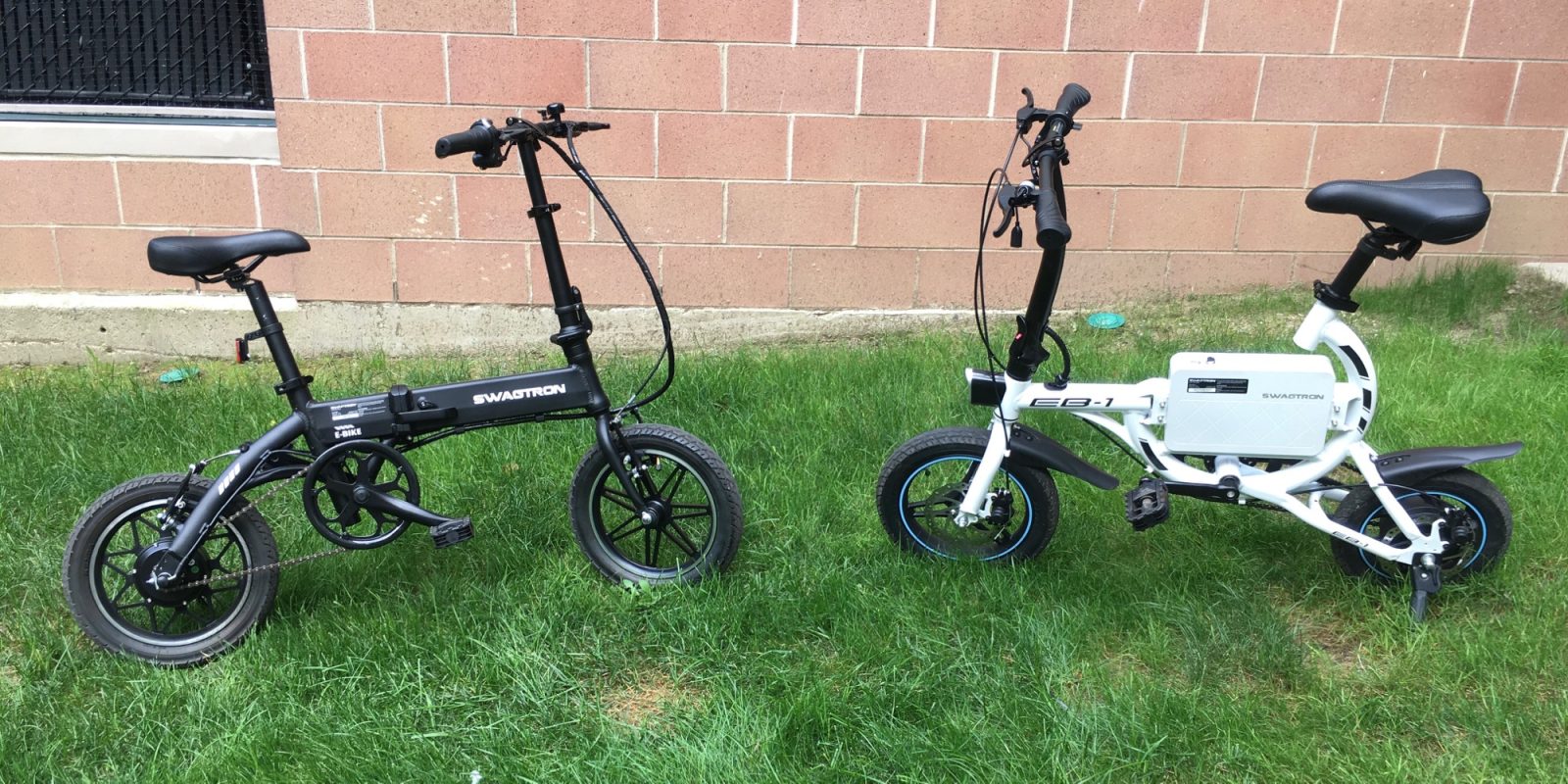 I’ve tried a pile of electric bicycles over the years. Probably over a hundred different models – it’s a perk of working in the industry!

Swagtron has a pile of fun electric bicycles, scooters and skateboards. In the past, many of their personal electric vehicles have fallen closer to the “toy” end of the spectrum. Fun for riding around – but not really a legit commuter vehicle that you’d use to get to class or work.

But their latest two e-bikes are different – I can confirm that these things are fully fledged light electric vehicles.

Over the past three weeks I’ve had the chance to try them out, and I even roped my wife into the review with me. We’ve put a bunch of miles on the pair of e-bikes and now I’m ready to spill.

While there are dealers and stores that offer these bikes for sale in some cities, many people purchase them online, meaning they show up at your door in a big (though surprisingly not that big) bicycle box. This is a “some assembly required” type of gig, but the assembly process is really smooth. My wife and I unboxed these two little e-bikes and each assembled one, with the whole process taking not more than 20 minutes or so.

Basically, you unfold the bikes, cut off a pile of styrofoam and cardboard protectors, then screw on the pedals/accessories and you’re pretty much ready to go. The EB-1’s disc brakes needed a bit of adjusting to remove some brake rub, but the EB-5’s brakes actually looked good right out of the box.

Check out the video below to see our unboxing process (and to laugh at me installing the front fender on backwards).

At first glance, the bikes look quite little. The smaller 14″ and 12″ wheels definitely give the e-bikes a much smaller footprint than most other electric bicycles I’ve ridden. However, the bikes don’t feel as small as they look. The frame design results in a seating geometry isn’t that much different from a mid-sized bike in terms of seat height and distance to the handlebars – the wheels are just much smaller than most are probably used to.

The EB-5 is also quite adjustable, and with such a long seat post, it can fit long-legged riders over 6 feet tall. That doesn’t mean you won’t look a little funny as a giant on a mini bicycle, but it will fit you nonetheless.

The smaller of the two is the EB-1, and it doesn’t have quite the same range of rider size. Swagtron says that it can fit riders up to 5’6″, though I’m 5’7″ (1.7 m) and it works for me. It definitely feels small, but not uncomfortably small.

The seat post is fairly short on the EB-1 because of the location of the battery, which limits how high you can raise it for taller riders. But if you wanted to swap in a longer seat post, you’ll be able to get away with having longer legs than me. Of course the bike won’t fold as small with a longer seat post, but you can always pull the seat out if you need it to fit in the trunk or under your desk.

The production and electrical specs are quite similar on both e-bikes. They both have 36V batteries, 250W motors and weigh around 36 lbs (16.5 kg).

Life is full of tradeoffs though. If you can put up with the lower range and speed of the EB-1, you’ll be rewarded with some features not found on the EB-5, such as an integrated headlight, disc brakes, a USB charging port and a cool little bell built into the brake lever. I don’t know why, but I really love the combo brake lever/bell setup. It’s super easy to use without having to look down to find the little bell dinger. Plus, as anyone who rides in a city knows, you’re constantly dinging at pedestrians that stray into bike paths. 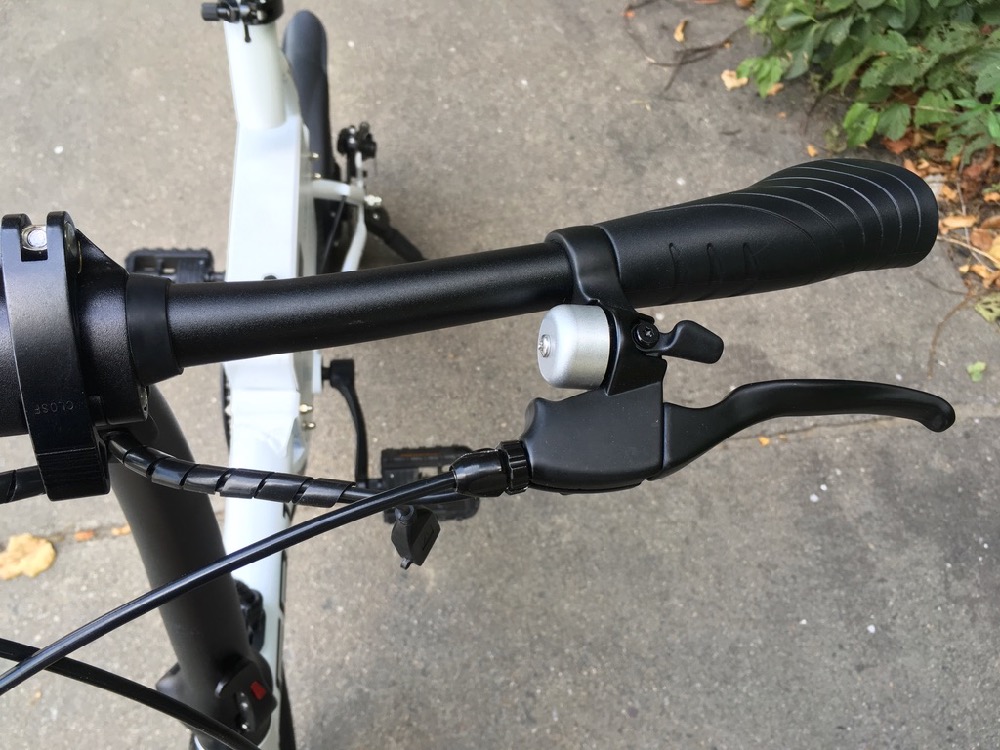 In terms of performance, despite both e-bikes being listed as 36V and 250 W, the EB-5 feels a bit stronger than the EB-1, so I assume it has a higher current controller. “250 W” monikers are often used because they help e-bikes fit into established classes, but you’ll find that the actual power of e-bikes varies a lot more than most performance stickers would indicate. Both bikes have sufficient acceleration on flat ground, but the EB-5 is a bit stronger on hills.

While the performance of both bikes is good, it’s also not going to knock your socks off. But remember, these bikes cost the same as a couple of months of public transportation in many cities, so the bang for your buck is still way up there. The acceleration is plenty strong for city riding, even if it can’t be described as “thrilling”.

I found that an interesting consequence of the smaller wheels is that you won’t be able to pedal these at a very high-speed due to the gear ratio. Because of the small rear wheels, 12″ on the EB-1 and 14″ on the EB-5, the gearing just isn’t very high. That’s great for getting started from a stop by pedaling since you have awesome pedal torque. But once you get above 8-10 mph, you have to spin your legs really quickly to go any faster. Above 12 mph on the EB-1 feels like you’re pedaling comically fast.

But considering these are Class 2 e-bikes with hand throttles, I didn’t spend much time pedaling. I just let the motors take me everywhere I wanted to go at 12-15 mph, no pedaling required. 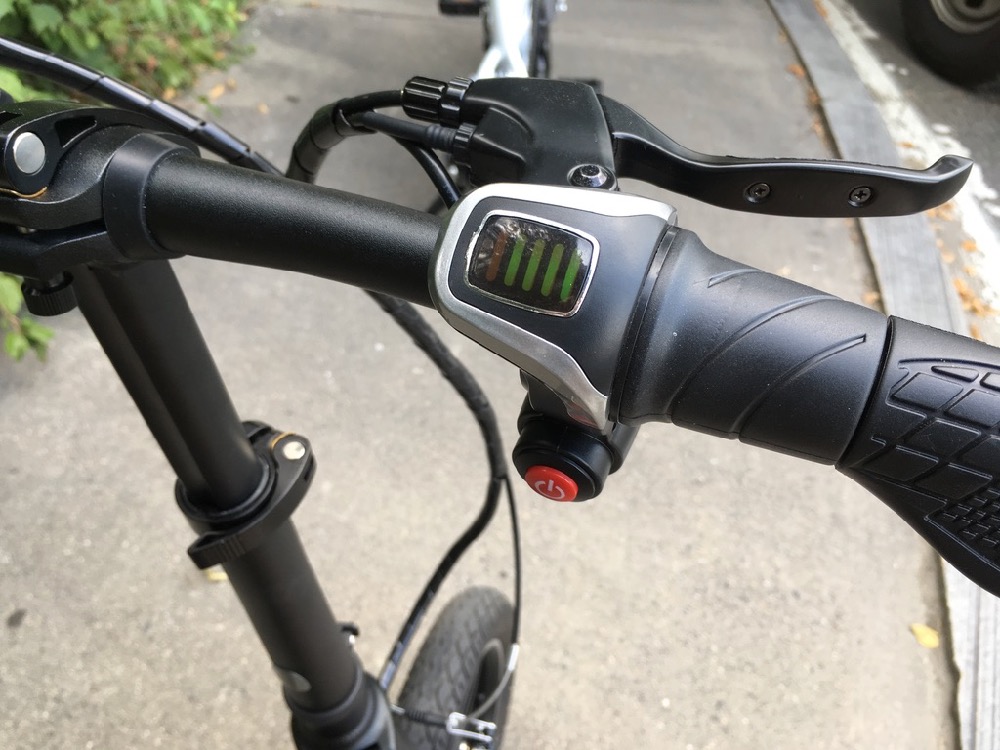 So what types of uses are these little e-bikes good for?

I used the EB-1 and EB-5 mostly for city riding, which is where they really excel. They are nimble and quick, making them perfect for scooting around city streets, bike lanes and sidewalks. Plus, they are small enough that you can easily wheel them around inside or into an elevator without a problem.

I took the EB-5 on a bit of trail riding too, just to see how well it worked. It got the job done, but the small wheels and lack of suspension mean its better left on the pavement, with only sporadic off-road excursions. Though it’s still good to know that it can handle it if needed.

Most people won’t need to travel more than 7.5 miles (12 km) in a city, so even the EB-1’s smaller range will be good for the average commuter.

But with the EB-5’s 15 mile (25 km) range in such a small package, I found that I could go for long periods of time without needing to charge the battery, which was super convenient as I’m always forgetting to charge things. I was riding the EB-5 everywhere since it was probably my favorite between the two, and it just always seemed to have charge left, even after pushing it hard. I think I was probably charging it once a week.

Another advantage of the EB-5 is that it folds into a tiny package. Though the EB-1’s handlebars fold down, it doesn’t fold in half in the middle of the frame like the EB-5 does. When folded in half, the EB-5 would fit perfectly under your desk or in the trunk of a car. 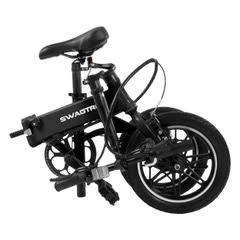 What about the quality?

When it comes to budget e-bikes, I usually worry about the quality of the components, since that is where companies often try to save money. But these two bikes are surprisingly good quality for the price.

Other e-bikes will have super cheap shifters, derailleurs and other bike components. Not these bikes. Mostly because they don’t have shifters and derailleurs.

They are single speed bikes, which kind of makes sense. The gearing ratio is already so low that you wouldn’t need to downshift – they are basically geared for low-speed already. And there just isn’t any room for a larger chainring on the front or smaller cassette on the rear, so there’s not really a chance for up-shifting either.

The single speed is fine for low-speeds and helping on hills, and the throttle is all you need for higher speeds. For me, these are basically mini little electric mopeds. You take a seat, twist the throttle and enjoy the ride. And by cutting out some of the components that aren’t really necessary, Swagtron cut out some costs without needing to skimp on quality. I prefer not having a shifter as opposed to having a cheap one that would break on me.

The brakes and other components aren’t high-end, but from all of my riding around I can tell you that they work well and don’t feel like they are going to snap off in your hand like some cheap components I’ve seen on other bikes. So these aren’t top-shelf e-bikes, but they are definitely of higher quality than some other more expensive e-bikes I’ve seen that tried to include too many features by bolting on a pile of cheap parts.

Essentially, these are just simple, effective little e-bikes. They aren’t the best I’ve ridden, but they probably are the best bang for your buck that I’ve ridden.

So I’d certainly recommend these bikes to anyone who wants to get into e-biking and try it out, but doesn’t want to commit to a more expensive bike. Also, these are definitely for someone who is looking more for an electric transportation device and not for a form of exercise, because you’ll probably end up using the throttle way more than you’ll pedal on these.

Ready to hop on a Swagtron e-bike? You can find them on their website or on Amazon.

What do you think of these capable little e-bikes? Let us know in the comments below.