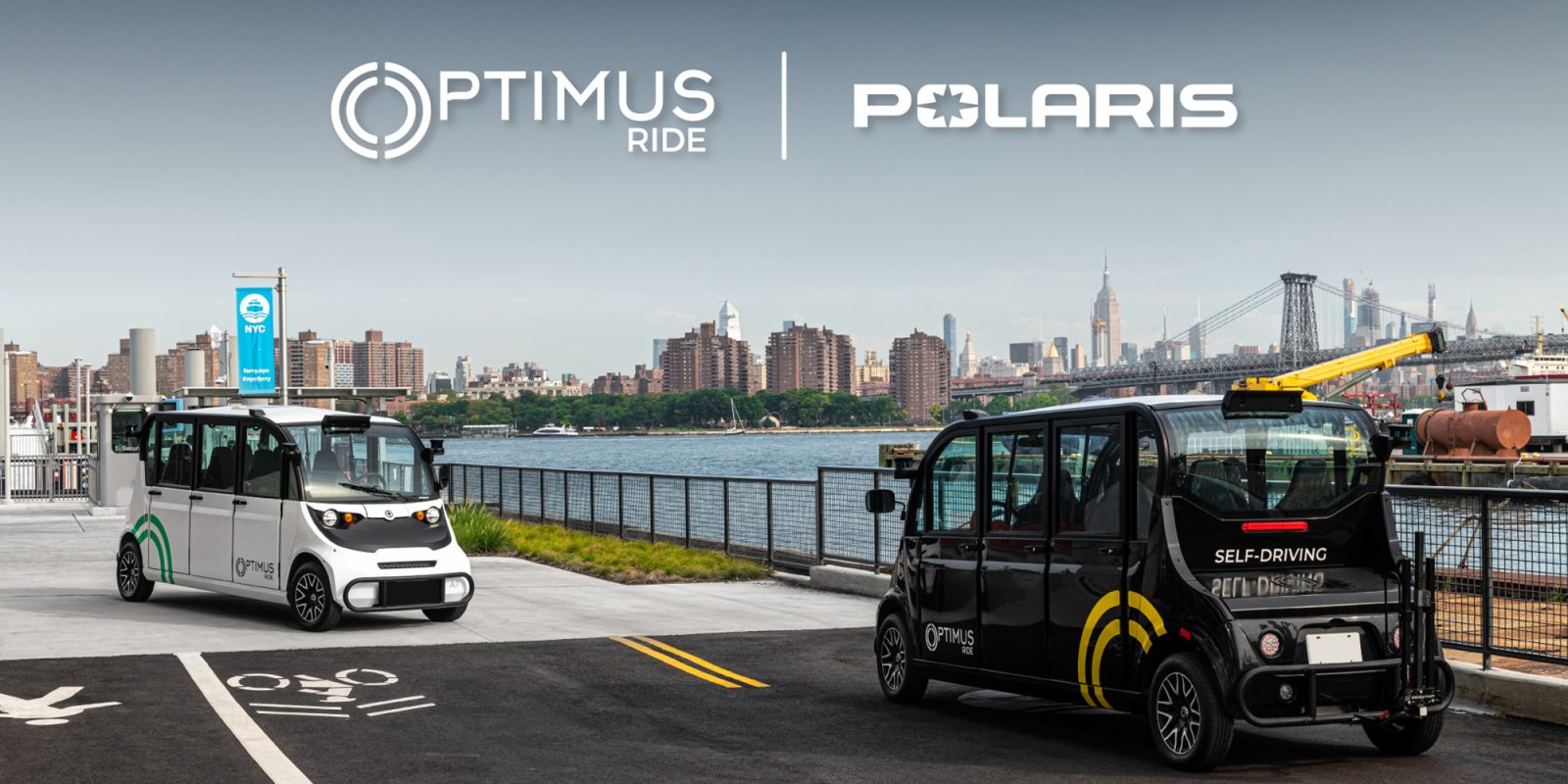 In a recent press release, Optimus Ride announced a partnership with Polaris to manufacture custom-designed GEM vehicles. Under the joint agreement, an exclusive line of Polaris GEM electric low-speed vehicles (LSVs) will be re-engineered to integrate Optimus Ride’s autonomous software and hardware suite direct from the factory.

Optimus Ride is an autonomous electric mobility service provider that develops the algorithms, software, hardware, and system integration for EV solutions. This newly announced partnership is a continuation of an investment Polaris made in the autonomous network development company last year.

Polaris Inc. ($PII) is a global leader in powersports, known for vehicles like the Ranger, RAZ-R, and Slingshot. Its lineup also includes Indian Motorcycles, snowmobiles, and even pontoon boats. In recent years, however, Polaris has adapted its products toward some electrification, especially in its Polaris Commercial division.

Polaris Commercial is the division behind the Ranger EV and the entire GEM brand. GEM stands for “Global Electric Motorcars,” and currently offers a zero-emission lineup of three passenger vehicles and two utility vehicles.

In the press release, Optimus Ride announced that its full-stack autonomous vehicle technology will be combined with Polaris’ resources and expertise in scalable production. Both companies hope these state-of-the-art autonomous EVs offer a benchmark in the deployment of driverless, remotely monitored vehicles. Optimus Ride’s CEO Sean Harrington elaborates:

Expanding our partnership with Polaris accelerates our pursuit to transform personal mobility by delivering on-demand, autonomous transportation services to communities across the country. Polaris is the ideal partner to bring these vehicles to market with their established leadership in the LSV space, ability to quickly scale production and their deep knowledge of and experience in urban mobility. We are excited to formally commit to transforming our mobility services to a fully autonomous experience.

In the past two years, Optimus Ride has already successfully completed more than 75,000 rides with Polaris GEMs throughout the US. This includes the safe transport of passengers in geofenced communities in Massachusetts, Virginia, California, New York, and Washington, DC. So far, Optimus Ride has demonstrated significantly lower transportation investment. Furthermore, it has exemplified that autonomous LSVs like Polaris’ GEMs can serve as a revolutionary vessel for microtransit.

Polaris believes it has found the right partner in Optimus Ride for autonomous GEMs, too. In the press release, Keith Simon, vice president and general manager of Polaris Commercial, said:

As a leader in their industry, Optimus Ride is helping to shape the future of transportation with its turnkey autonomous mobility service and its focus on safety, reliability, convenience, and sustainability. We share these priorities and, building off our equity investment from last year, Polaris is pleased to take our partnership to the next level by co-developing autonomous GEM vehicles. We are committed to working together to promote the widespread adoption of autonomous GEM vehicles across the country. This partnership will bring trusted, safe, and fully autonomous rides into the everyday lives of people on campuses, in cities, and in communities for years to come.

A spokesperson for Optimus Ride told Electrek that the immediate focus of the partnership will be to develop Polaris’ GEM e6. This is also apparent from the images shared by the companies that feature the six-passenger GEM only. That said, there are also four- and two-seat model GEMs, should they ever want to expand.

According to the specs on the Polaris Commercial website, the GEM e6 offers12-68 mile range, depending on the battery size. It holds 8.7 horsepower and can travel up to 25 mph (these are LSVs, after all). With room for six, this EV can haul over 1,300 pounds in payload, so great for groups of tourists.

Optimus Ride and Polaris plan to bring these new fully autonomous GEMS to market by the second half of 2023. After that, the two companies plan to work together to deploy these driverless vehicles all across the country.

Overall, this is a cool partnership. Polaris is a name synonymous with sport and adventure. Additionally, Optimus Ride is a viable teammate for them as they dip a toe into future tech like autonomy. Ideally, this will lead to more electrification throughout the Polaris army, not just on the commercial side. But hey, it’s a start.

The GEM is a simple and cool machine. Its low speeds and short trips will be perfect to develop and optimize the autonomous technologies from Optimus Ride, too. It’s certainly not the sexiest EV testing full-autonomous driving. However, in geofenced communities, the partners are at a strategic advantage in R&D.

The stakes not at high as, say, testing highways, but the overall demand from the technology should be less, too. It’s still a daunting task to master nonetheless. Even LSV autonomy on the GEM will take a couple more years. If it can get us from a bus shuttle to Wrigley Field or Paul Revere’s House in Boston without having to drive (or have anyone drive?), we’re here for it.