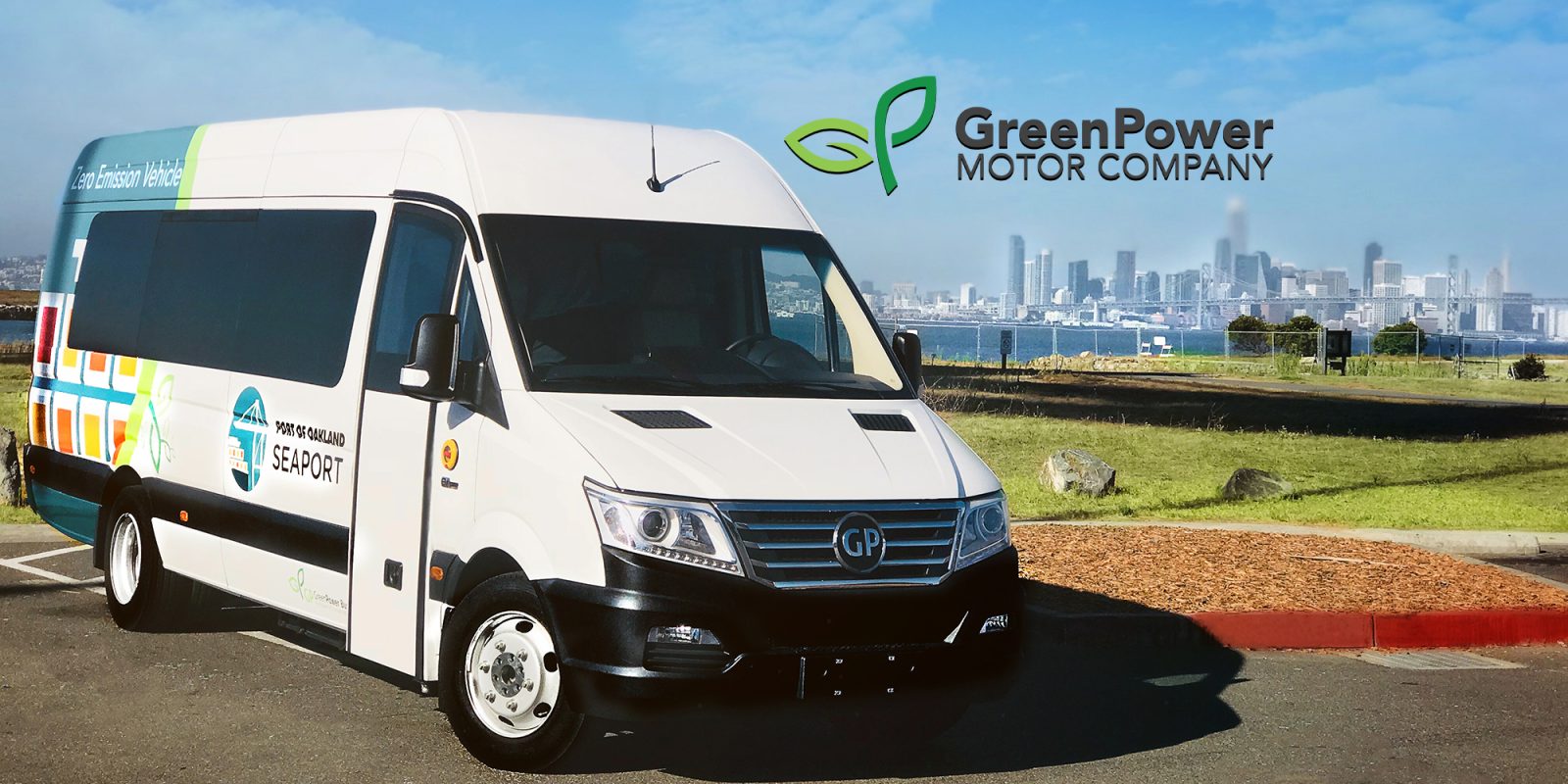 As the first days of spring are officially upon us, we focus our spotlight on GreenPower Motor Company. This EV manufacturer designs, builds, and distributes purpose-built zero-emission shuttles, cargo, and transit buses. From purpose-built mini-buses to wireless charging and Level 5 autonomous technologies, GreenPower has a lot of clean innovation going on.

GreenPower Motor Company ($GP) was founded in 2010 in Vancouver, BC where it is still headquartered. Additionally, GreenPower operates its own manufacturing facility in California.

GreenPower really got its EV wheels churning by developing low floor buses for transit authorities. This includes the 30ft EV250, 40ft EV350, and a double-decker EV550. In 2016, the EV550 became operational in Vancouver as the first purpose-built electric double-decker bus in North America.

Around the same time, GreenPower announced plans to develop and manufacture a series of high-floor electric vehicles as well. Its EV lineup now includes a customizable chassis for cargo, shuttles, and school buses.

The EV Star remains GreenPower’s flagship vehicle since its debut in 2018. It is classified as a heavy-duty Class 4 mini-bus. The 25’ shuttle is the first purpose-built, electric Class 4 vehicle. Meaning it’s designed and built from the ground up to be battery electric. The EV Star offers a 118 kWh battery capacity, capable of up to150 miles of range on a single charge.

Furthermore, this EV also has the capability to charge wirelessly at 55 kW. GreenPower is currently working with Momentum Dynamics to further research and implement this technology into future fleets. Wireless charging is achieved based on the scientific principle of resonant magnetic induction. This provides automated charging with no cords or moving parts.

First, a receiver pad and electronics module are installed on the GreenPower EV.  The ground side of the system consists of a charging pad installed in the pavement. This pad is then connected to an electronics cabinet. High-frequency AC power is generated by the electronics cabinet, and transmitted by the charging pad to the vehicle. The high-frequency AC is converted to DC power, which directly charges the vehicle’s battery.

GreenPower Motor Company continues to work on its charging technologies and is confident it can reach 75 kW for both DC and wireless charging soon.

What may be most interesting about the EV Sta,r however, is its potential for tax incentives. GreenPower’s flagship EV is the first in its class to be both Altoona tested and certified. Additionally, it is Buy America Act Compliant. As a result, the Federal Transit Administration (FTA) can subsidize up to 80% of the purchase price for vehicles that fit this specific criteria.

Since the EV Star is built as a clean-sheet design, GreenPower Motor Company is able to modify the top half of the chassis to best fit a customer’s needs. As a result, variations include the EV Star CC (Cab and Chassis), EV Star+ shuttle offering more passenger space, and a wheelchair lift. There is also the EV Star Cargo and Cargo+ tailored specifically to… you guessed it, cargo.

The name stands for Battery Electric Automotive School Transportation. This 40-foot bus can haul up to 90 passengers with its electric drivetrain manufactured by TM4. Its 193.5 kWh battery capacity offers a range of 150 miles on a charge. The B.E.A.S.T. can charge in 8 hours on single phase 220 volt, 100 amp (22 kW), and also has a DC fast charging option that can juice up in 1.5 hours (100 kW).

According to the manufacturer, the B.E.A.S.T. was the school bus market’s first purpose-built type D zero-emissions bus to be certified and operate in the United States. GreenPower has begun its initial production run of 100 B.E.A.S.T. school buses for prospective orders, which will be available for delivery in the middle of 2022.

It originally planned to produce five additional buses a month, but GreenPower Motor Company has now ramped up production to 10 units a month due to positive feedback and anticipated demand. For context, there are currently around 480,000 ICE school buses in the US alone. The Biden Administration has already announced hopes to electrify this fleet by 2030. As the largest EV school bus on the market, GreenPower hopes to gain a chunk of this large transitioning market.

Out of GreenPower’s fleet so far, the AV Star could be the most promising. This fully-electric heavy-duty mini-bus is the United States’ first zero-emission, Buy America, ADA Compliant vehicle of its kind. Did we mention it’s fully autonomous?

Working together with Perrone Robotics, GreenPower Motor Company has been able to integrate autonomous driving into its EV Star to create the AV Star. The collaboration has already led to a full, Level 5 autonomous service for the Jacksonville Transit Authority (JTA).

GreenPower Motor Company’s first AV Star delivery could lead to up to 60 more operating in the Jacksonville area too. The vehicles would operate on the city’s upcoming Ultimate Urban Circulator or U2C. Furthermore, GreenPower has partnered with Perrone Robotics and First Transit to develop a second AV Star to be used for a demonstration tour later this year.

GreenPower is ahead of many others by successfully operating Level 5 autonomous driving, in a Class 4 bus nonetheless. However, it still believes it has a ways to go. In an interview with Electrek, GreenPower’s President and Director, Brendan Riley said:

Perrone has a very good software stack and they have really great AI technology. The real issue with autonomous vehicles is going to be this. One, you need the ability to capture all the data you need to capture. More and more will come from cameras and processing that.

I don’t know that it’s really going to take off to the level we need, until we have 5G technology ubiquitously. Even in the vehicles, where you can communicate at high speeds and remove some of the cabling, to really have the ability to deal with all this data. Because the name of the game is how to take all this data, interpret it, and be able to do it in a safe, efficient way.

Despite having a long way to go. GreenPower’s AV Star shows a lot of promise for shuttling citizens or cargo autonomously in the future. You can view the AV Star in action here:

The future of GreenPower Motor Company

In speaking directly with Electrek, GreenPower Motor Company has plenty of goals looking forward. First and foremost, the automaker plans to continue to electrify the Class 4 segment as it has found a niche there. By offering six separate models on the EV Star platform that share about 95% of the same components, GreenPower is able to operate as an OEM.

Additionally, it can sell chassis, trucks, or buses to other companies who can then tailor the EV to fit its needs. Whether it’s a garbage truck, a delivery vehicle, or a shuttle bus, GreenPower can provide the vital components. Its current subsidies certainly sweeten the pot for customers too.

With the Biden Administration looking to electrify school buses nationwide, GreenPower will continue to produce B.E.A.S.T. buses to contribute to the cause.

Lastly, GreenPower plants to continue developing and improving its wireless charging capabilities for fleets, as well as its autonomous driving technologies. Truthfully, neither technology appears fully scalable at this point in time, but the potential is tremendous. Furthermore, GreenPower is quite aware of this potential and plans to continue to nurture it.

We plan to cover GreenPower Motor Company as it tours its AV Star autonomous EV later this year. Stay tuned for more in the coming months.