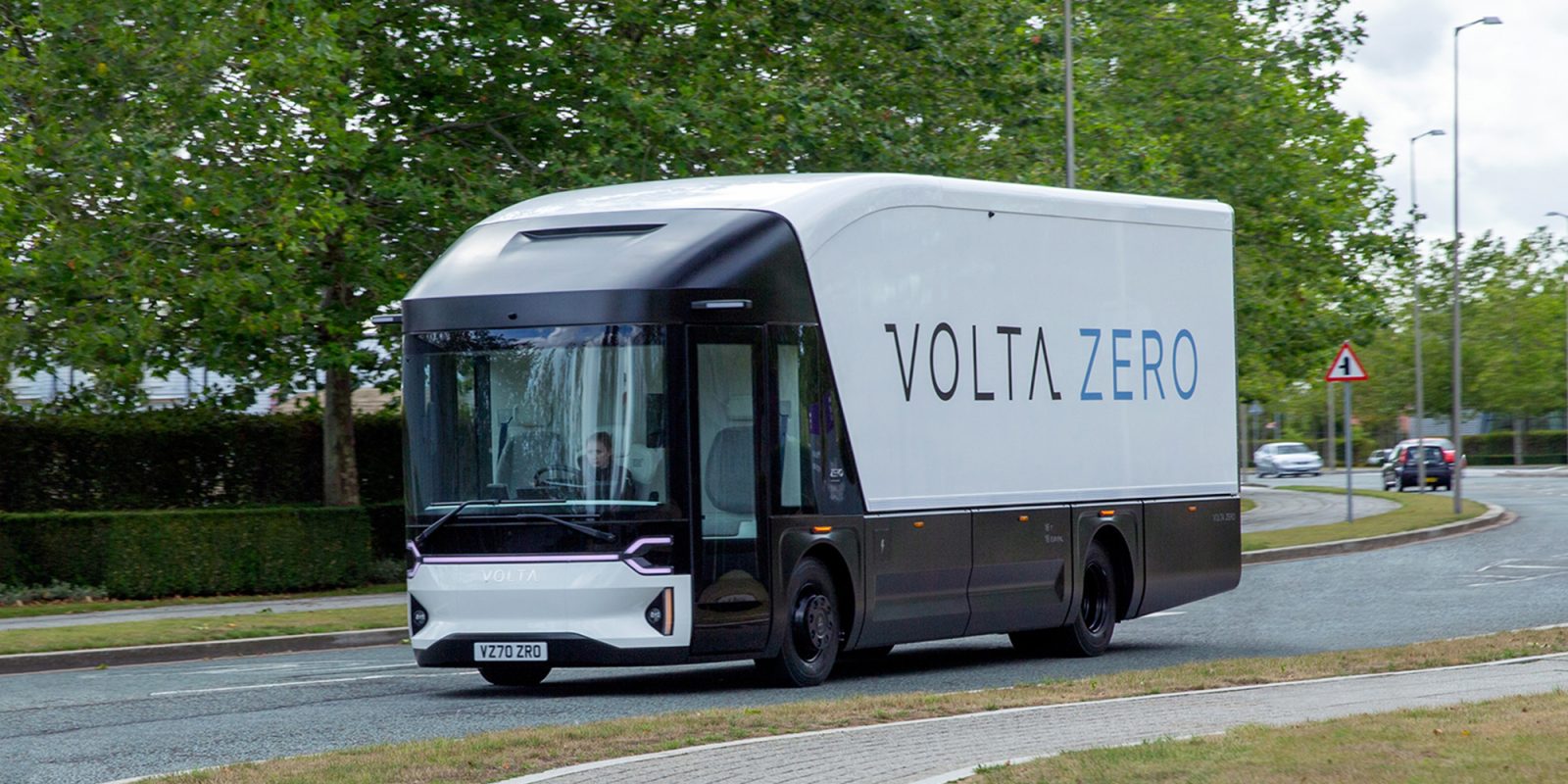 It’s a fresh new week, and you know what that means. You get to peruse another article on an up-and-coming EV manufacturer. This week we’re in London, home to Volta Trucks and its zero-emission commercial fleet vehicle.

Volta Trucks is a startup full-electric vehicle manufacturer and services company. Since being founded in 2019 in London, Volta Trucks has opened additional offices in Sweden and France. As a young EV startup, Volta’s focus is on its first commercial EV, the Volta Zero. This 16-ton EV truck will serve as a last-mile delivery fleet for city centers.

In January, Volta announced $20 million in additional funding, bringing the Volta Zero order book to over $260 million. Investors and fleet managers alike see some potential in the startup’s first zero-emission commercial truck. As a result, its success appears to be growing rapidly.

The company’s focus isn’t just manufacturing commercial EVs either. Volta Trucks has a clear vision for healthier environments in more populated urban areas. In fact, it aims to remove 180,000 tons of CO2 from city centers by 2025. Furthermore, the safety of others on the road is a huge priority for Volta looking forward.

A spokesperson from Volta Trucks explained it better:

If you take London as an example, official figures show that 20% of pedestrian fatalities and 78% of cyclist fatalities are attributable to large commercial vehicles. Vehicles that only travel 4% of the road miles of London. This is clearly unacceptable. This, twinned with the fact that air quality issues are at their worst in city center environments, showed there was an opportunity to make a significant impact with a new type of truck.

Thus, the Volta Zero 16-ton commercial EV truck was born. Volta has aggressive timelines for the Zero’s production, and ambitious goals in combatting CO2 emissions. Clearly, the startup is looking to make an environmental impact sooner rather than later. It all starts with the Volta Zero.

Truck as a Service (TaaS)

One unique strategy offered by Volta is Trucks as a Service (TaaS). In this business model, Volta provides everything a fleet operator needs to easily migrate to a fleet of electric vehicles. This includes the EVs themselves, as well as the installation of charging infrastructures. Furthermore, Volta will handle the service, maintenance, training, and insurance. Per a spokesperson for the startup:

Many large fleet operators have teams of internal experts to support them, but many smaller organizations don’t, and might be concerned or daunted by the many things they need to consider. With previously experienced fleet operators working within the Volta Trucks team, we understand these concerns, and want to take them away from the fleet manager, allowing them to focus on their operations, and allowing us to focus on the electrification of their fleet.

This strategy makes Volta a Cerberus of EV fleets that covers provision, infrastructure, and maintenance. By assisting in all aspects of fleet procedures, Volta is able to utilize sustainability to lower Total Cost of Ownership (TCO) for customers without sacrificing its own profitability. This is a similar approach as some other EV companies Electrek has put a spotlight on.

The Volta Zero is the world’s first purpose-built full-electric 16-ton vehicle designed for inner-city freight deliveries. It goal is to reduce the environmental impact of freight deliveries in city centers. Volta Trucks claims it has adopted a holistic and comprehensive approach to sustainability, going far beyond just tailpipe emissions. You can certainly see evidence of this upon taking a closer look at the Volta Zero.

The Volta Zero is the world’s first road vehicle to use sustainably sourced, carbon-neutral Flax, and biodegradable resin composite in exterior body components. According to a press release from Volta Trucks:

The Flax fiber’s quality, yarn thickness and twist are all highly engineered, and the weave is reinforced by Bcomp’s patented powerRibs™ grid technology, inspired by the principles of leaf veins. The result is a fully natural, extremely lightweight, high-performance fiber reinforcement that is almost CO2 neutral over its lifecycle. The panels made with powerRibs™ can match the stiffness and weight of carbon fiber but uses 75% less CO2 to produce.

Furthermore, the biodegradable composite was developed in collaboration with the European Space Agency (ESA). Emissions aside, the sheer manufacturing strategy by Volta Trucks remains very carbon-conscious. These exterior panels also offer a clean, customizable surface for fleet customers to brand or advertise on.

The first Volta Trucks will sit upon Bridgestone tires as well. Last summer, the global tire manufacturer announced it would be supplying tires for the Volta Zero launch vehicle. Its tires will also appear on the pilot fleet of upcoming trucks.

In addition to working with Bridgestone, Volta has found other industry partners for the Volta Zero manufacturing process. For example, Proterra is currently providing the batteries while Meritor will be providing the electric motors. According to a spokesperson for the startup, it is in late-stage negotiations with additional partners. It should be able to confirm more details in the coming months.

Since the Volta Zero is a large commercial vehicle, a majority of it remains dedicated to payload capacity. Not very exciting, but vitally necessary of course. With that said, the driver’s cabin features some interesting designs to ensure comfort for drivers and safety for passersby.

What’s interesting about the upcoming Zero is its centrally located driver’s seat and doors on both sides of the cabin. A spokesperson for Volta broke it down thoroughly for Electrek:

We have taken the packaging benefits that the removal of the internal combustion has provided to completely reimagine the design of the commercial vehicle, that’s remained largely unchanged for decades. Without the engine, we can sit the driver lower, and centrally, to maximize their field of vision. This removes blind spots, but also puts the driver at the same height as the vulnerable road users like cyclists and pedestrians, who are around the vehicle while it operates in city centers, thus improving visual communication.

This central captain’s chair is complimented by a curved windshield, large glass doors, and 360-degree cameras in lieu of sideview mirrors. The glass doors in particular offer more natural light and visibility. They also help ensure the safety of a driver on busy streets. The lower seat offers low step access from either side of the EV. This allows the drivers to always exit on the sidewalk rather than in a busy stream of cars in the traffic lane.

Let’s dig into the numbers on the Volta Zero truck thus far. Keep in mind, this is an EV that’s still being developed, and some of these numbers could certainly change. For now, however, Volta Trucks claims fleet managers can expect to see the following specifications for their upcoming 16 ton EVs.

The battery capacity will range from 160-200 kWh, offering a range of 150-200 km (95–125 miles). It can reach a top speed of 90 km/hr (56 mph). Additionally, the Zero can muscle a payload max of 8,600 kg (19,000 lbs). In its payload storage, it can house 16 EUR-pallets without stacking. Inside the cabin, the driver’s seat is centrally positioned. however, up to two additional seats can be implemented for multiple passengers.

The future of Volta Trucks

Volta remains a very young startup in a growing EV market. With that said, its progress toward launching the Volta Zero has moved at a lightning pace. In 2020, the Zero truck was merely a sketch. It is now a drivable prototype in less than 12 months.

According to the company, it remains on target to meet the original objectives set when it launched the Volta Zero last September. Despite the pandemic and other economic headwinds, Volta believed it had to accelerate the launch of its electric vehicles because the world cannot wait.

The Zero truck is currently in the product development phase. However, Volta expects to have a small pilot fleet of EVs ready for testing by the end of 2021 and into early 2022. A spokesperson from Volta elaborated:

The pilot vehicles will give early customers the opportunity to evaluate the Volta Zero, to understand how a full-electric 16 ton commercial vehicle integrates with their operations, but also give Volta Trucks a huge amount of data on the different use cases that our customers need. This (data) can be input into the final stages of development. We expect to then start series development of customer-specification vehicles about 12 months later, in late 2022. We are currently on track to meet that ambitious plan.

For all our European readers out there, keep an eye out for Volta trial fleets on roads in London and Paris soon. Volta also has plans to expand to other European cities next. If you live stateside, don’t worry. Volta Trucks hopes to expand to North America, too.

As an EV manufacturer in its infancy, many details surrounding the future of Volta Trucks have yet to be revealed, at least publicly. Lucky for you readers, you are now aware of the startup and can follow its growth along with us.