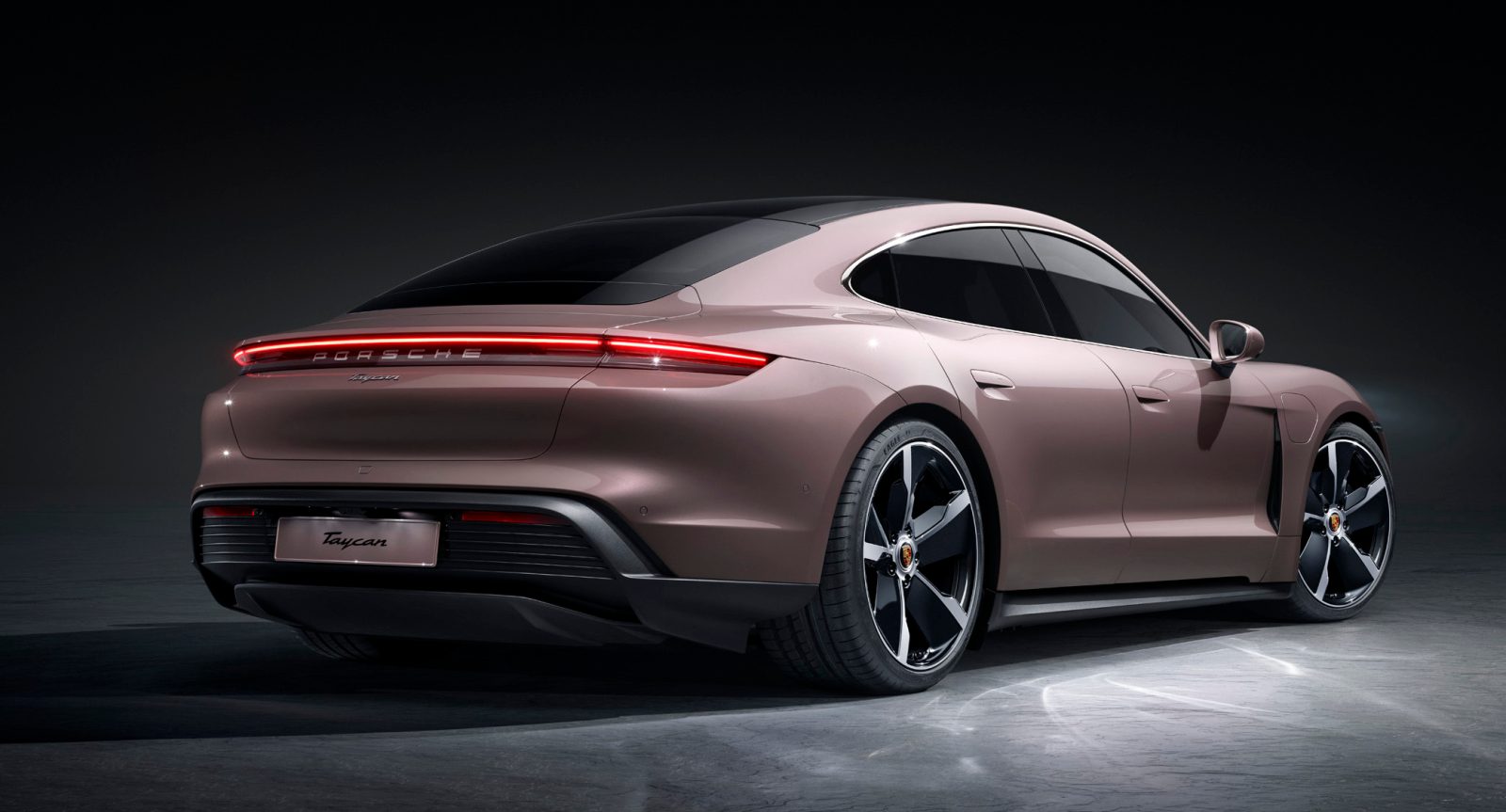 Before today, buying a Porsche Taycan in the US was a six-figure layout. The first full battery electric vehicle from Porsche was only offered in packages starting from $103K for the Taycan 4S to $185K for the Turbo S (reviewed here).

Today, Porsche is now opening the floodgates to Taycan ownership with a base model offering starting at $79,900. With federal and state EV incentives, the price could drop below $70K. But what did Porsche cut to get the price there?

Porsche sold 20,000 Taycans in its first year, and it’s already been Porsche’s best-selling model in Europe over several months.

Now, the “affordable” Taycan finally arrives on US shores, saving 200 lbs by removing that pesky front motor and offering a smaller 79.2 kWh battery option. Until today, Porsche had not even said whether it was going to release the base Taycan in the US, let alone when it would be hitting its home continent of Europe where it will be £70,690 in the UK and similar in Continental Europe. So today’s news is welcome.

The US destination charge of $1,350 and deducting federal tax credit of $7,500 will put most buyers at or near $73,840 before state and local incentives kick in as well as electric savings over using gas.

The standard Performance Battery provides the power to produce up to 402 horsepower (300 kW) and 254 pound-feet of torque from the Taycan’s single rear motor. When equipped with the optional Performance Battery Plus, the motor can produce up to 469 hp (350 kW) and 263 lb-ft of torque. Regardless of battery configuration, the Taycan can accelerate from 0-60 mph in just 5.1 seconds and has a top track speed of 143 mph. With the standard battery, the Taycan covers the quarter mile in 13.7 seconds, while the larger pack shortens the sprint to 13.5 seconds.

The 0-100 km/h (0-62 mph) time of 5.4 seconds was given to the Chinese variant, but it is unclear whether this represents a slight improvement over those last few miles per hour.

Just like its more costly siblings, the base Taycan will charge at up to 270 kW at compatible charging stations. The smaller battery option will only charge at 225 kW, however.

Regardless of size, both take just 22.5 minutes to charge from 5% to 80% when the appropriate battery state of charge and temperature are met, and the car is connected to a compatible high-speed DC fast charger.

Porsche had originally claimed a Taycan charging capability of 350 kW and has promised an upgrade when that becomes available.

As we mentioned, losing the front motor will reportedly knock 200 lbs off the gross weight of the vehicle. Interestingly, Porsche notes that its front trunk won’t get bigger (just 2.8 cubic feet) with the subtraction of its front motor, but the rear will retain its 14.3 cubic feet of cargo space (up from the 12.9 cubic feet of the Turbo/S). It remains to be seen what kind of effect that has on range since the AWD Taycan uses its front motor predominantly for eco driving.

Even though only half the wheels will be able to regen brake the standard Taycan, Porsche says that it will still be able to recoup 265 kW in doing so, a very healthy stopping force. But it’s also a lot for two tires to absorb without slipping, especially in snow or gravel.

Also, for calipers fans, the brakes will be black on the standard Taycan vs. the red on 4S and yellow on the more expensive Turbo models.

The Taycan comes standard with 19-inch Taycan Aero wheels, six-piston front brakes and four-piston rear brakes. This setup is similar to the Taycan 4S, but the color of the wheels and the calipers differ. The Taycan will feature black calipers and alloy wheels painted in brilliant silver as standard, while the 4S is equipped with red calipers and polished alloy wheels with high gloss black spokes. As on other Porsche Taycan models, Porsche Surface Coated Brakes and Porsche Ceramic Coated Brakes, as well as 20- and 21-inch wheels are optional. Regenerative braking via the brake pedal remains, as does its class-leading 265 kW recuperation rate.

Porsche Active Suspension Management with dashboard controls comes standard, but adaptive air suspension can be ordered as an option. Air suspension allows the Taycan to drop its impressive drag coefficient down from .24 to .22.

The same features found on other Taycan variants are all here: Porsche Connect with Apple CarPlay, Function on Demand, Plug and Charge, Apple Music, over the air updates, and three years of free Electrify America charging — all included with the car as standard. Additional optional equipment such as Porsche InnoDrive with Traffic Jam Assist, a 19.2 kW on-board charger, Head Up Display, 14-way seats with massage functionality, upgraded audio systems, and multiple exterior colors and interior trims are available to choose from – all in a Porsche typical sports car drive train layout. Taycan buyers will be able to track the progress of their car from their smartphone, from build to delivery, through the Porsche Track Your Dream service.

I think Porsche is going to sell a sh-ton of these $80,000 variants, and here’s why: Aspirational folks are going to want this gorgeous car without having to break the bank on specs. Let’s be real, these are specs that they might not necessarily need in day-to-day life. For instance, the top speed on the base model Taycan drops from the 155-161 mph of its higher-priced siblings down to a mere 143 mph. As for 0-60 times, you are looking at dropping from 2.3-4 seconds down another second to 5.1 seconds for the base model. Noticeable, but merging onto the highway is still going to be a cakewalk.

Also it is interesting that this comes now as sister company Audi is set to release the Taycan-based Audi GT.

For me, the biggest differentiator here is the battery size. At just a hair under 80kWh, the base Taycan likely will barely hit that magic 200-mile baseline (EPA figures are due closer to announcement, according to Porsche). I say “likely” because Porsche is saving some weight and efficiency with a smaller battery and no front motor. On the flip side, Porsche Taycan 4S/Turbos would use its front motor for highway efficiency in the most eco setting. Also, Porsche is known to reduce its stated EPA range artificially. Why? Some speculate that it wants a bigger buffer for warranty compliance.

The AWD Taycan 4S with the same battery is 199 EPA miles. If I had to guess, I’d say the EPA range will be about 215 for the $80,000 model and 245 with the Performance Battery Plus. Those are respectable numbers, but for many, the 300-400 mile range that Tesla touts on similar-sized Model S batteries will be hard to ignore. The RWD Taycan in China is rated at 489km (303 miles) NEDC but that is quite optimistic compared to EPA’s mileage.

The other part of that equation is charging options. At Electrify America 350kW capable stations, 20 minutes is fantastic and barely enough time to use the restroom. But at the more common 50kW stations, this will take 90 minutes to charge, which is long, even if you plan to enjoy a meal or do some shopping while stopped.

But as we’ve said in the past, there is plenty of room in the market for Porsche here, and they will likely be pulling most new Taycan customers from ICE sports car and sedan alternatives.

As someone who has owned every S-3-X-Y model and who has driven the higher-specced variant of the Taycan, I can say unequivocally that there are undeniable plusses here. Fit and finish, styling, handling, interior/exterior design, CarPlay, comfort, and customer service come to mind. Range and charging availability are the obvious big wins for Tesla.

In fact, if I’m a typical Porsche customer, the only thing holding me back from picking up a Taycan is the prospect of an all-new Electric Macan AWD SUV that many believe will get announced this year and be on the road in 2022.

Oh and one last thing Porsche wanted us to know: The Taycan is the most powerful standard model variant Porsche has ever made. So not a bad package at all, and dare I say “tempting”?

You can find local deals on Porsche Taycans including the new $80,000 model here.