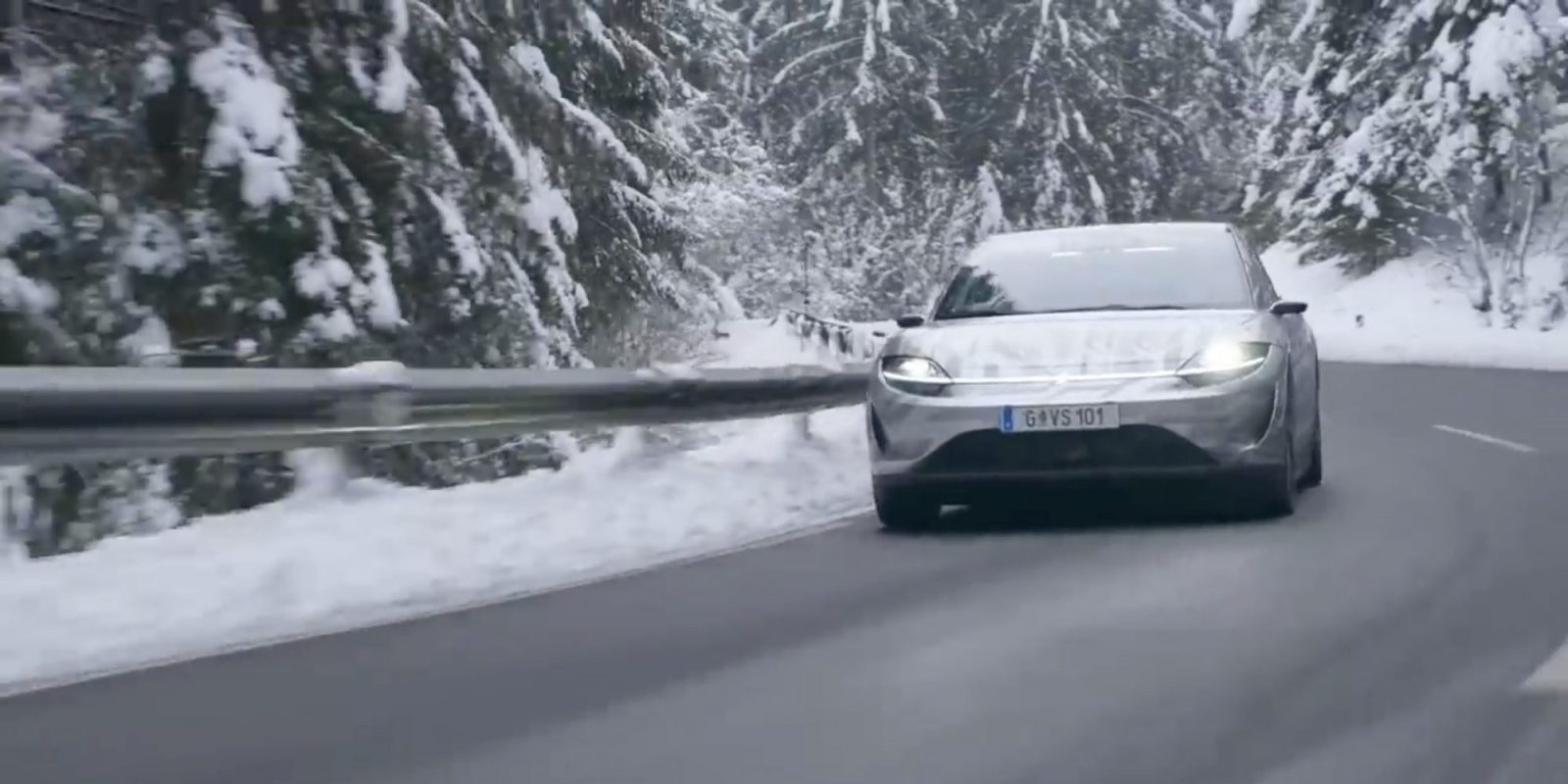 Sony released multiple videos showing off their Sony VISION-S electric car concept, which they first unveiled in a surprise move one year ago at CES.

The videos provide new insights on the design and engineering of the car, with comments from partners Sony is working with, and reveal that Sony has started testing their vehicle on public roads near their engineering center in Graz, Austria.

We haven’t heard much about Sony’s EV project since last year’s CES debut, but Sony took the occasion of this year’s online-only CES to pull back the curtain a little more.

Last year’s launch was fairly low on information, so we don’t have a lot to build on. Announced specs included a variety of sensors for autonomous driving, an “immersive audio experience,” a “software-oriented design,” 400kW (536hp) dual-motor all-wheel-drive, 0-100km/h (0-62mph) in 4.8 seconds, and a top speed of 240km/h (149mph).

We still have no information on availability, price, or battery size. In fact, even though there are some portions of this video that show the car’s driver and range display, both the battery percentage and remaining range units are zeroed out, so we can’t even sneak any insight from that. And Sony hasn’t said a word about production or dealership plans, which means there’s still a lot to be done before getting the VISION-S into the hands of customers.

But the new video offers some interesting insights nonetheless. It switches between Japanese and English, but you can use YouTube’s closed captions for a translation:

Sony states that they have increased the number of sensors for autonomous driving to 40, from the previously announced 33. This doesn’t mean a whole lot on its own (cars have a large variety of number and types of sensors), but apparently Sony felt they needed more than the originally planned for.

Sony’s “software-oriented design” is the focus of much of the video, showing off how Sony can leverage their expertise in entertainment devices to make better software for a car.

The most eye-catching feature of the original VISION-S concept was a large widescreen that encompassed the whole dash, and Sony seems to be sticking with it as they continue to develop the vehicle. At one point a PlayStation controller is shown connected to the screen playing Little Big Planet, a PlayStation game.

Sony’s partners spoke on the importance of communications and the cloud in today’s vehicles, and a representative from Bosch praised Sony’s human-machine interface features. (Side note: Bosch recently took a dumb stance against EVs, despite being a large supplier of EV equipment.)

That human-machine interface seems to include facial, speech, and gesture recognition. A portion of the video shows thermal imaging of the cockpit while the driver does a gesture with one hand, and also shows a facial and speech recognition system being trained.

While Sony didn’t say when the VISION-S would come out, Horst Schaffer from Continental did state that he “has the feeling that all involved parties want to bring this vehicle as soon as possible to the street.”

See more in another short “road testing” video, which has no voiceover but shows the Sony VISION-S driving through some snowy Austrian public and private roads. The car is camouflaged, but it doesn’t seem to hide much – particularly considering we’ve already seen it without camouflage at CES last year.

When Sony first showed off this concept last year, we were skeptical about whether it was the real deal or just a vehicle for Sony to show off potential applications of their entertainment devices in the automotive space.

The fact that they’ve stuck with the project over the last year and have an impressive list of partners in traditional automotive supply that appeared in the video suggest that perhaps this is more real than we originally thought.

But we’re still low on specs, and the video is still filled with lots of stiff, corporate PR-style statements that leave us wanting more. It does feel like everyone has an EV prototype these days, and so few of them have actually made it to the road that we have to be skeptical of any new one we see.

As we said after the last announcement, at least Sony’s concept is not outlandish, unlike some other presentations have been. Nothing in the VISION-S is particularly unreasonable. It could certainly be made, for a reasonable but premium price, with the specs we’ve seen – which include a lot of the expected features out of EV concepts these days. And Sony is big and established enough to put together the resources and partners required.

The facial and gesture recognition features, the giant screen, and a few other proposed features do push the boundaries a bit, but they’re close enough to reality that they don’t immediately cry foul about this project.

Perhaps the most interesting thing about the project is that it’s coming from a large, old Japanese company. Sony is by no means a startup, and large Japanese conglomerates are known for being relatively conservative in their business decisions, so a big move into a capital-intensive and fast-moving industry (EVs, specifically) is worth a raised eyebrow or two.

Meanwhile, Japan is making embarrassingly soft commitments about green cars, seemingly to protect their intransigent, hybrid-obsessed, and anti-EV auto industry (see example statements from Honda, Toyota, and Mazda). And yet Sony is still pushing forward with an interesting all-EV project.

Sony is much smaller than Toyota or Honda but is nearly as big as Nissan and much bigger than Mazda. The only Japanese automaker that has shown consistent support for electric cars is Nissan, and the rest have little to nothing on offer. They have a few upcoming models, some of which are underwhelming and some which look pretty fun even though the company is obviously hostile to their existence.

So there’s definitely a vacuum in the Japanese EV industry, and Sony could fill it. If they do, there’s plenty of room for them to move up the ladder of the biggest Japanese companies, and to steal market share from larger companies that think they can sit on their laurels and continue selling gas-guzzling hybrids even through 2035 when the world will have moved well past the idea of burning dead dino-material to get to the store and back.

But, as we always say, it’s all about getting the car on the road, fast, and in large numbers. Sony could take share from these other companies, but they’ll have a much better chance at it if they beat them to market. Luckily for Sony, much of the competition (domestically and internationally) is dragging their feet quite hard, so they’ve got an opening if they can get it together fast enough.