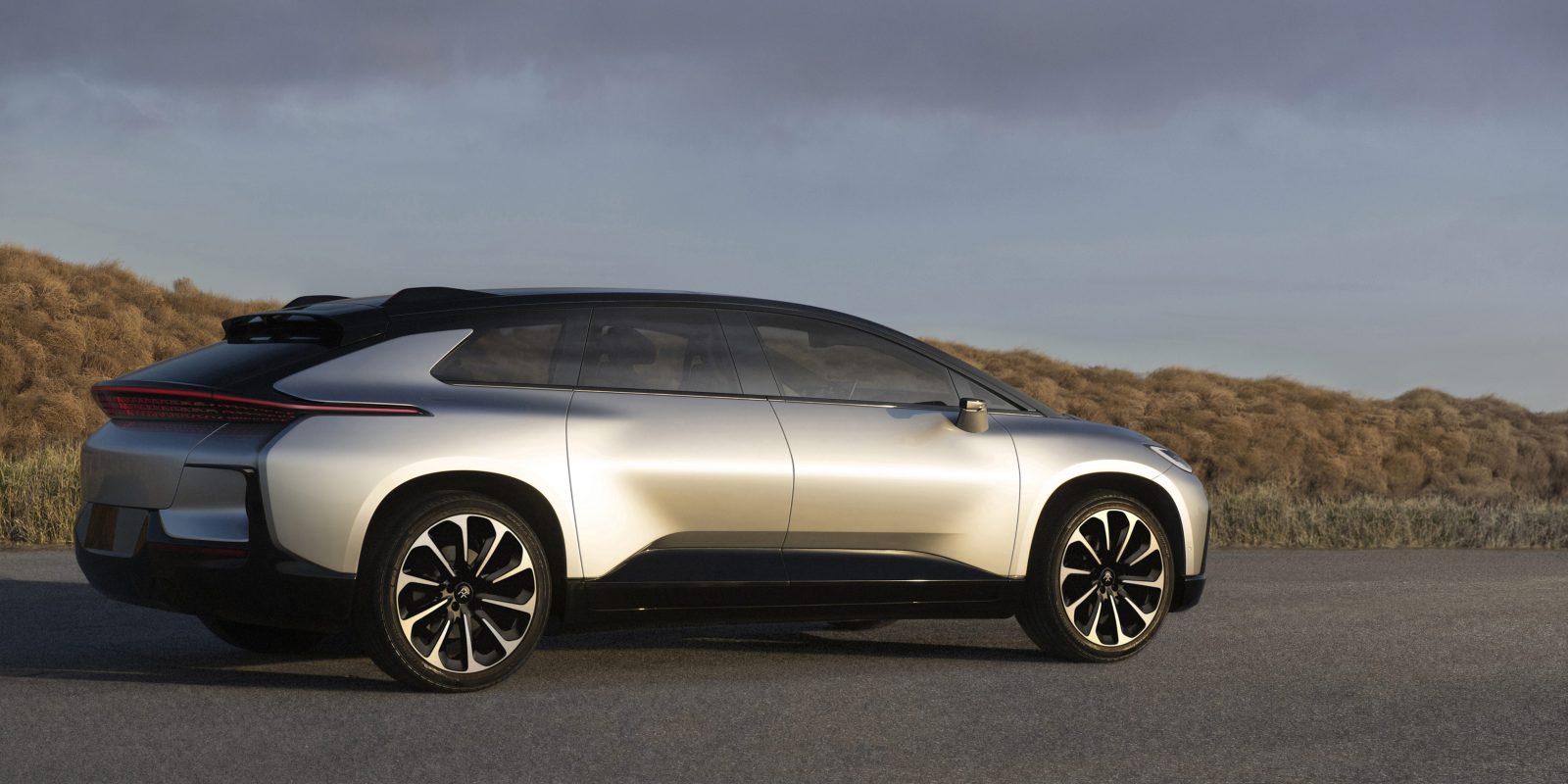 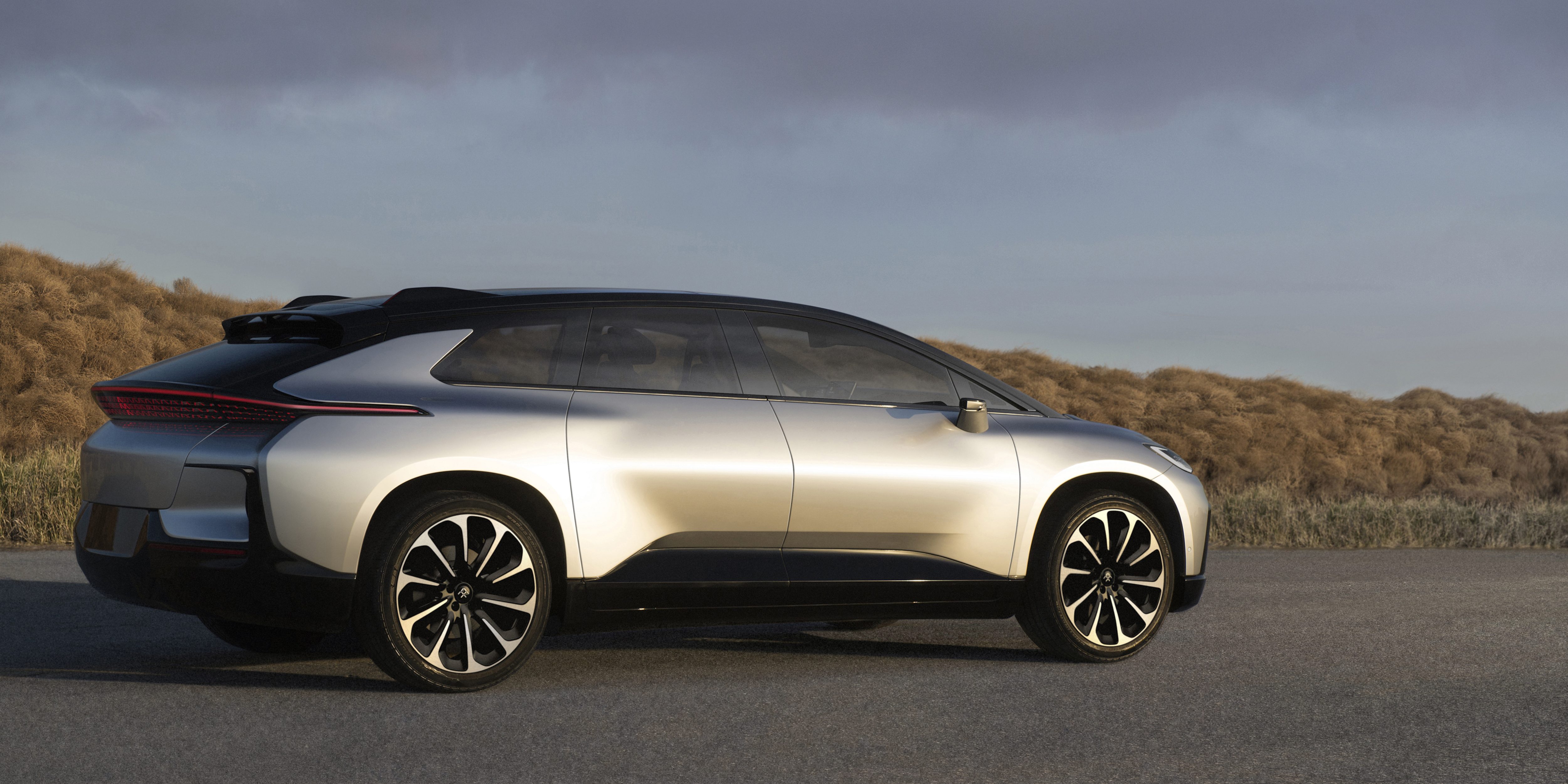 Faraday Future has just finished revealing their first car, the “FF 91”, in a livestreamed demonstration from CES 2017, and boy was the demonstration a doozy.

The FF 91’s specs are incredibly impressive.  With a 130kWh battery, it will have 1050 horsepower, which Faraday Future claims is the most of any electric car (but actually falls short of the Rimac Concept_One by 38hp) and 378 miles of EPA range.  The 200kW DC charging system purportedly charges the car at a rate of 500 miles of range per hour (and a 15kW AC home charging system for 50% charge in 4.5 hours), and the car will include self-driving capability courtesy of a 3D LIDAR system embedded in the center of the hood.

See more about the specs and presentation, and some photos, below the jump.

Unfortunately it’s not just the FF 91’s specs which left the audience reeling – the demonstration had several miscues and technical difficulties, including a seeming reluctance to show the car under full lights without a spy camo paintjob (presumably to build dramatic tension); a strange on-stage 0-60 demonstration of several “benchmark cars” racing one-by-one across the stage, making it impossible for viewers to see which one of them was actually quickest; a failed demonstration of the car’s self-parking feature which left it stranded in the darkness at the back of the stage while LeEco CEO YT Jia stood alone center-stage under the lights without the car he was supposed to be introducing; a good amount of strange scripted banter between the various presenters; and poorly-timed applause breaks.  Much has been made of Elon Musk’s occasionally poor public speaking skills, but it seems that Faraday Future also managed to one-up Tesla on that front as well.

But that’s all just window dressing.  The FF 91’s specs seem impressive to the point of being unbelievable.

The presentation included a laundry list of just about every popular concept car feature from the last several years.  The FF 91 has internet connectivity through multiple LTE modems and Wi-Fi; aerodynamic side mirrors which will be removable in the event that side-view cameras gain regulatory approval; a touch-sensitive screen instead of door handles; intelligent LED lighting for brake lights, turn signals and charge indicators; suicide doors; self-parking; an HD display capable livestreaming media and seamlessly synchronizing streams across your devices; and keyless smartphone entry.  If you’ve ever seen it on a concept car, you can be sure that the FF 91 has it.

The FF 91’s driving specs seem purposely designed to beat “other benchmark vehicles” (namely Tesla, whose name was conspicuously absent from the presentation except during the on-stage 0-60 test and previously-shown teaser videos), with Faraday’s testing showing that the car is capable of 0-60 in 2.39 seconds.  During the on-stage presentation the car only managed to achieve 2.59 seconds, which was .01 faster than the Tesla Model S’ 2.60 seconds on the day.  Faraday pointed out that the Model S was wearing the standard 21″ sport tires whereas the FF 91 was wearing all-season tires, but did not point out that the Model S does not yet have the upcoming 0-60 improvement update.

The FF 91 also includes torque vectoring, though Faraday Future’s press release only states that it has a “multi-motor setup” which enables torque vectoring to “the rear wheels” – which suggests that the car is either rear-wheel drive with two rear motors, or all-wheel drive with one front motor and two rear motors.  In addition to torque vectoring it includes all-wheel steering, which should enhance cornering ability and turning radius – both of which will also be aided by the battery’s low placement in the chassis, contributing to a low center of gravity. Despite the impressive driving specs, the FF 91 seems designed around passengers, particularly in the rear seat.  The rear seat looks exceptionally plush, and deliver “industry-leading reclining angles” on the “NASA inspired zero-gravity seats” with adjustable lower leg, lumbar, and upper back support along with heating, cooling, and even massage functionality.

While this level of comfort can be appreciated worldwide, it certainly seems that the car is targeting the Chinese market with these touches – where luxury car owners are often driven in the backseat rather than driving themselves.

The panoramic roof and rear and side windows are all made of dimming glass, which means passengers can simply tap on the window to add an opaque tint for privacy.  Finally, the car has cameras with facial recognition technology to automatically set music, temperature, scent and massage features if the car detects that you’re having a bad day.  It can even use facial recognition for keyless entry.

All of this comes with a production intent of 2018, and no announced price as of yet – although they are taking reservations.  If the price has any fewer than six numbers in it – and if the car actually makes it to production, which Faraday Future assured us will happen, stating “despite all the naysayers, the skeptics, we will persist, we will carry on” – that will certainly be an achievement.

We’ll learn more about the car in March at a reveal gala event, and be sure to keep you updated on whether this is actually real life or if we’ve all just had our drinking water laced with LSD.

Oh, and one last thing: as of this post, there’s no indication what the “91” actually means.  Give us your best guesses and tell us what you think about the announcement in the comments.