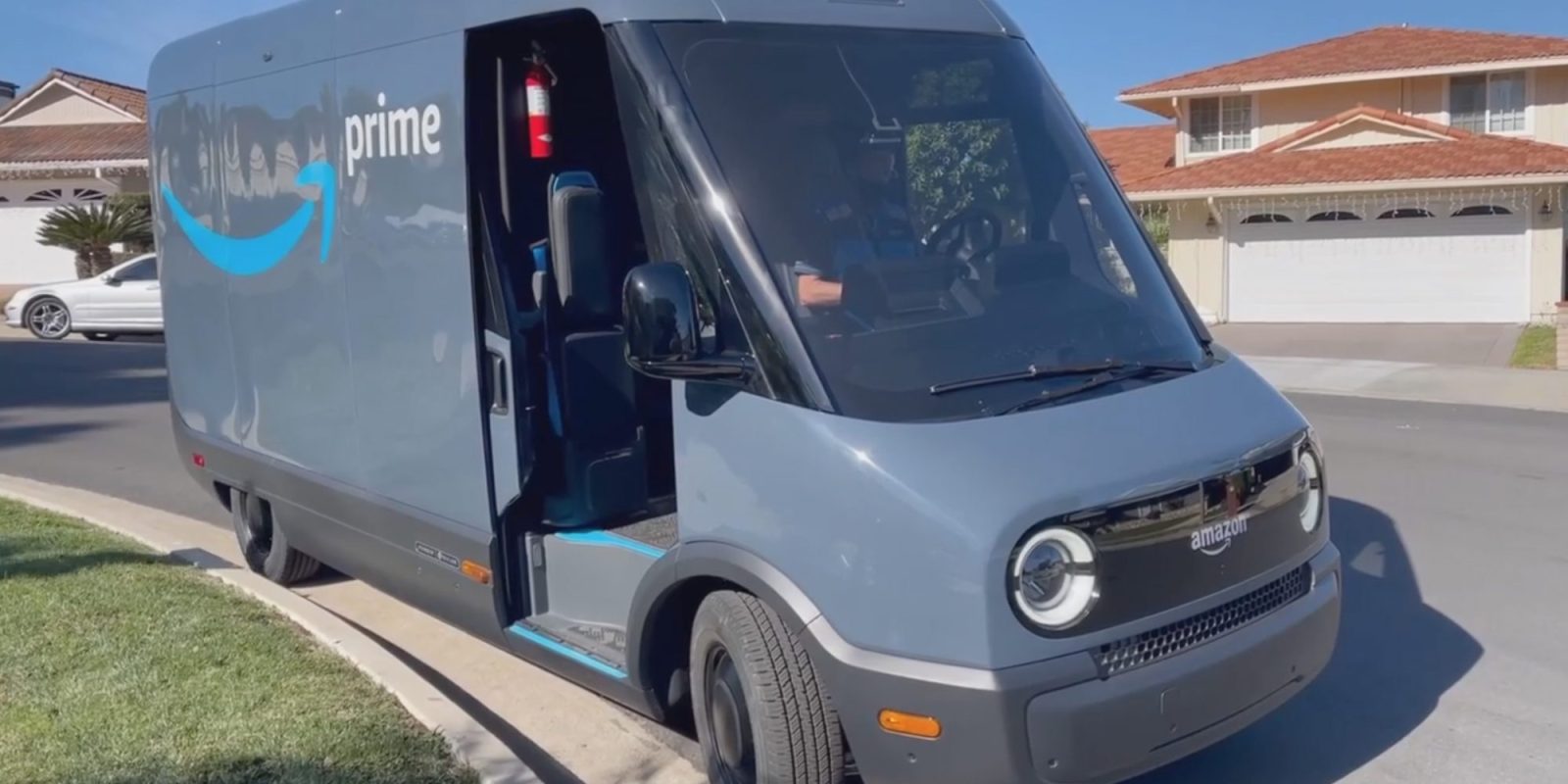 Rivian’s upcoming Amazon delivery van has been spotted in the wild in the Los Angeles area, seemingly being used in some sort of test capacity in the real world.

It looks about as we expected it would, but one surprise stands out: a loud “pedestrian-warning” noisemaker that sounds as unpleasant as our worst fears.

Just last month, Rivian’s van was spotted in prototype-form in Irvine, California, doing what may have been highway testing. It was accompanied at the time with several Rivian trucks as well, all near Rivian’s Irvine engineering facility.

Now only a few weeks later, we’ve seen our first video of the Rivian van out and about in the wild actually making deliveries in Los Angeles.

The video was filmed by Jeffrey Chen on December 22 in a suburban LA area neighborhood. It’s short but shows the van in full un-camouflaged form, manned by an Amazon manager and a Rivian engineer.

The van looks pretty much identical to the one Amazon unveiled in October, with a tall boxy look to maximize package space and large doors for easy ingress/egress. The windshield is massive for visibility, and Amazon logos are visible from every angle.

The video doesn’t show any actual deliveries happening, though Chen says that they delivered some packages to his neighbors, then stuck around to chat a little bit before moving on to do more deliveries:

The one thing that stands out is the pedestrian warning noise. Chen said the noise was similar in volume to a v6 engine and that he could hear it from inside his house.

The NHTSA has been working on a regulation requiring electric cars to make a noise when operating under 18.6mph, though its implementation has been pushed back several times over the years, most recently due to COVID-19.

Many manufacturers have already added their own noisemakers, with some sounding better than others. Every manufacturer has approached this requirement a little differently, which has led to quite the cacophony of different, unfamiliar noises coming from various electric vehicles.

The Rivian van in the video emits the noise not only when it’s moving, but when it’s stopped and “idling” (though electric motors don’t idle). It does seem quite unlikely that the van would run into any pedestrians while it is not moving.

Then the noise changes as the van begins to move, and presumably it will quiet down as it reaches higher speed (at which point road noise from the tires is more audible). The van never reaches high enough speed for the noise to fade out in the video.

Beyond the noise, one other thing to notice is that the van has Michigan manufacturer plates, which is the location of Rivian’s actual headquarters. Much of the van’s development is happening in Irvine, though, which explains why the van is in LA. Manufacturer plates means the van still belongs to Rivian and hasn’t actually been delivered to Amazon yet, at least in any permanent capacity.

Amazon plans to start deploying the vans this year and has ordered 100,000 of them from Rivian. The vans should produce significant cost and emissions savings, while being perfect for the application of daily, short, predictable routes with an opportunity to recharge every night. They should make work more pleasant for drivers as well, without the constant rumble and exhaust of an engine throughout the day – though this new noise might give back some of the ground gained in that respect.

Well, this take is going to mainly focus on the one big reveal from this video: the noise.

One of the benefits of electric drivetrains, particularly for delivery purposes, is they will help to cut down on noise in residential communities. The loud rumbling of a diesel van can be quite disruptive. Particularly in this last year where many people have had to work at home, noisy delivery vehicles, garbage trucks, etc., have done their fair share of disrupting various Zoom meetings or the peace and quiet required for certain types of work.

While the government contends that these warning noises will save lives by making it easier to notice electric vehicles, the move also limits one of the biggest benefits of electric cars: quiet operation. Noise pollution is responsible for significant early mortality and various health problems, and moving away from noisy engines and to quieter ones will help to mitigate this. And of course, moving to cleaner vehicles will help to save the literal millions of people who die from air pollution worldwide every year, much of which is due to vehicle exhaust.

Moving society to quieter electric motors would also make it easier to hear EVs coming, as the noises electric cars naturally make would not be covered up by a noisy gas engine a few lanes over. In this way, a world that is quieter in general could help save those same lives and more.

As for real-world tests of EV audibility, I myself live on a similar quiet suburban street, and I can hear an electric car coming from down the street, even an older vehicle without warning sounds – as long as there aren’t noisy engines around covering the noise up.

So while Rivian is required to put these warning sounds on their trucks, and while they are probably more necessary for large vehicles than small ones (trucks have long had “backup noises” because of their reduced visibility in reverse), and while they do have some necessity for these vans to be audible in a world that is already so noisy, I can’t help but feel that we’ve overcorrected here. Surely Rivian can come up with a better sound that isn’t quite so intrusive before these vans hit the road in earnest.

What do you think of the warning noise in the video? Let us know in the comments below.