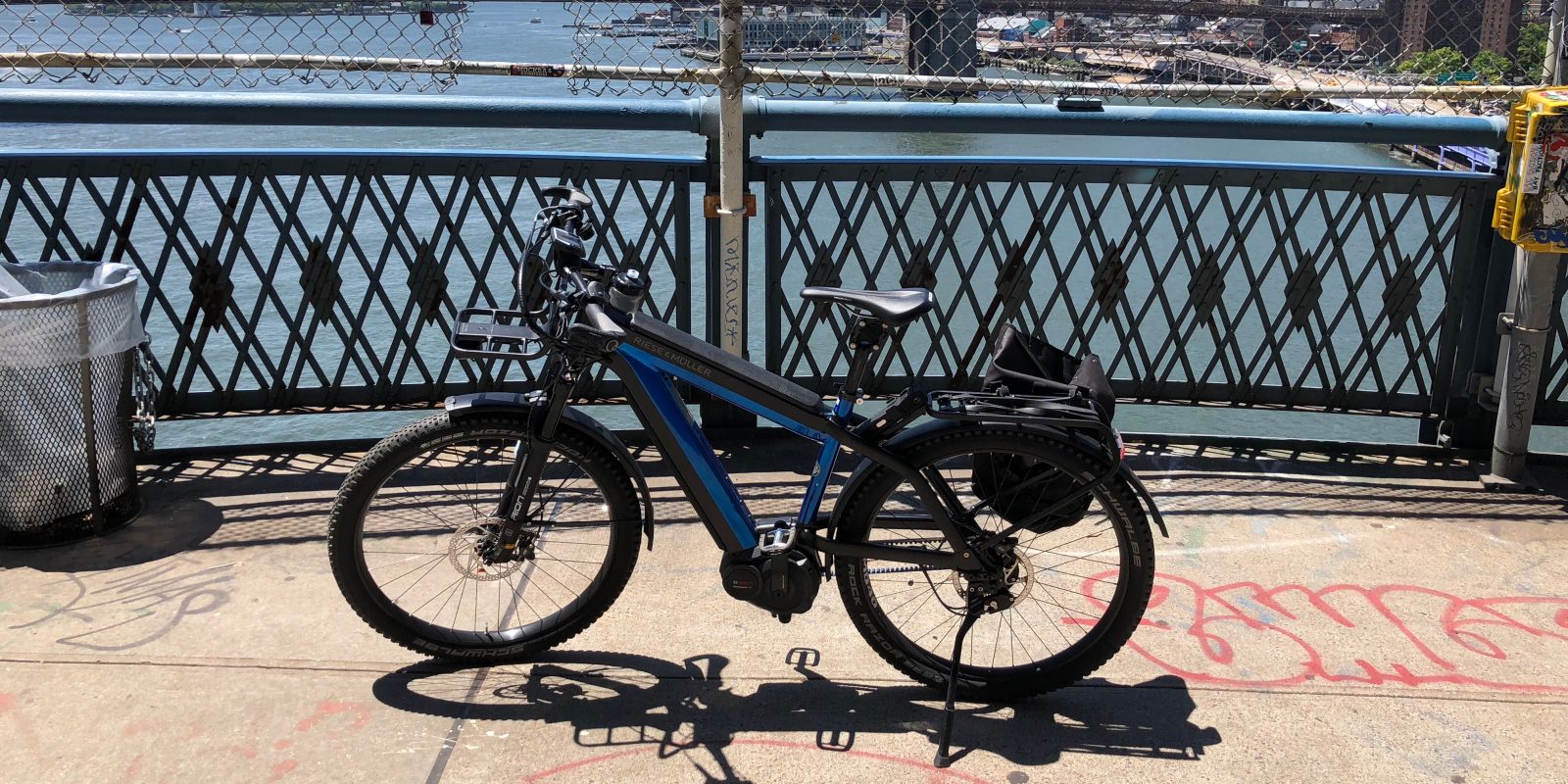 Bosch’s PowerTube batteries aren’t the first e-bike in-tube batteries by a long shot, but because Bosch maintains such a big share of the premium e-bike market, the new in-tube variant of their 500Wh batteries allow premium brand bikes to hide their power source better. And that means better looking and performing bikes.

We reviewed the Trek Supercommuter 8 last year which had Bosch’s old battery system, still integrated into the frame, and thought the $5000 price tag was tough to swallow, even for the premium components and experience. But we’re going to step it up a notch today with the dual Bosch PowerTube batteries (1kWh total) Riese & Müller Supercharger which we got on loan from Propel bikes in Brooklyn/Long Beach that retails for around $7000 kitted out.

If you haven’t heard of Riese & Müller, they are a medium-sized German outfit offering up premium German-built electric bikes based on Bosch powertrains. The Supercharger is their high-end touring bike and is offered in a bunch of different varieties. The one I got to ride had dual 500Wh (36V x 13.4Ah) batteries for a total of 1kWh. That’s 1/75th of a base model S/3 Tesla for those scoring at home.

The engine is the powerful Bosch Performance CX connected to a Rohloff Speedhub, 14-speed internal gearbox. I’ve got very conflicted feelings about the $1000+ Rohloff: on one hand, 14 gears and 1:5.6 gear ratio is fantastic and being able to switch gears at a stop is great for those unexpected red lights. On the other hand, having to stop pedaling to switch gears (the opposite of a traditional derailleur) vexed my hill climbs every time. I thought I’d get used to it but, for me, even after a month with the Rohloff, I still hated having to stop pedaling to switch gears.

The other downside to this bike is the weight. It looks like an absolute terminator-mobile with all of the bells and whistles and two big batteries, but that comes with a hefty weight cost. The obvious counter to that is that the powerful Bosch engine more than makes up for the weight on hills and I’d even go so far as to say the extra weight helps stabilize at high speeds. Speaking of speed, I got it over 50mph on a downhill near my house which is a record for me. 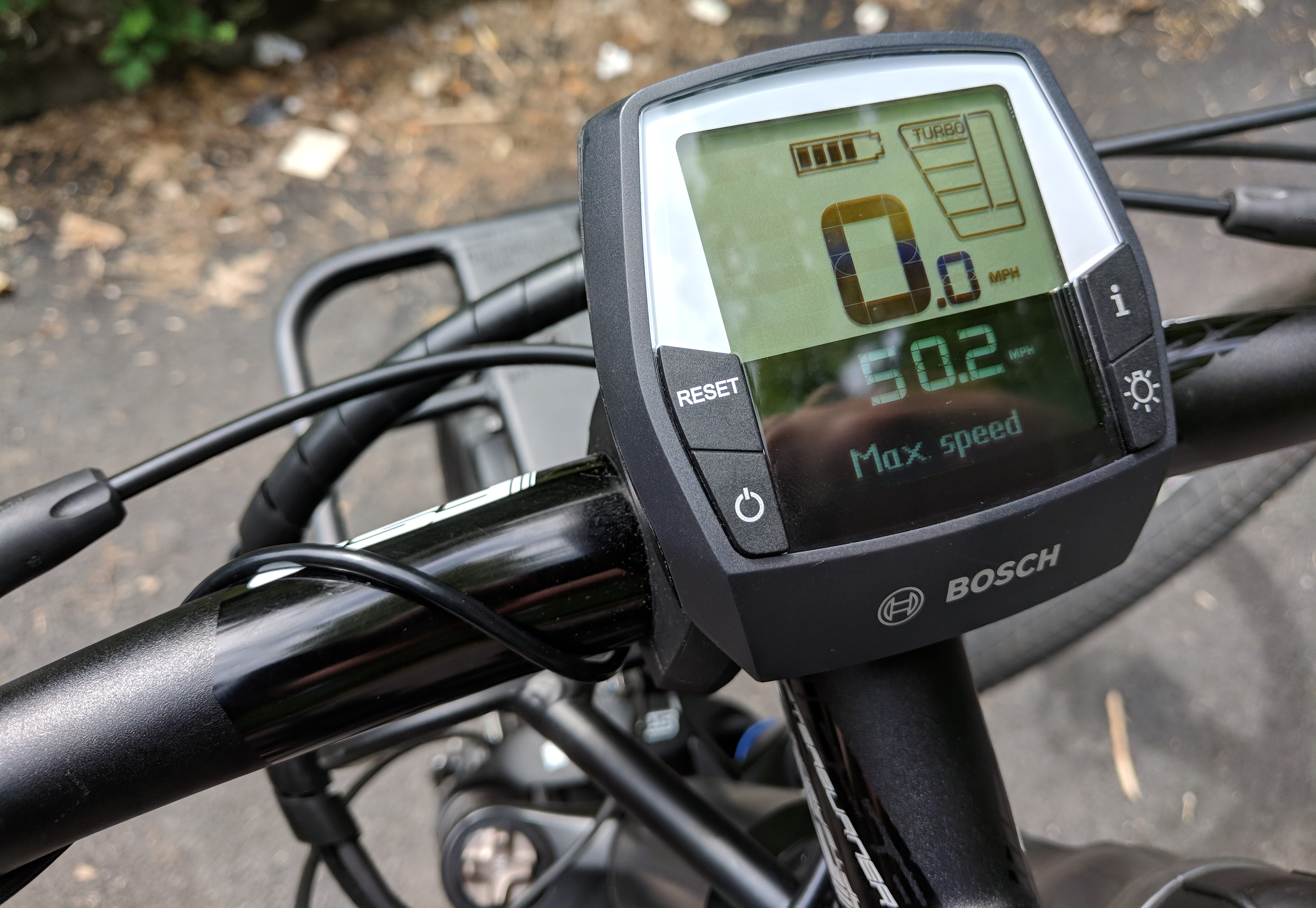 But at nearly 70 pounds, this isn’t a 4th floor walkup bike and getting it in into and out of your car isn’t terribly fun for your back, though with a 100 mile range in the lower modes, why would you need to drive it anywhere?

Speaking of range, the 1kWh of battery power puts this way out in front of other electric bikes that I’ve tested. I did my 10 mile hilly commute 5 times without recharging and used just a bit over half the battery. I can’t imagine a daily use scenario that this bike couldn’t conquer.

Those commutes were exceptionally comfortable as well, even though my town roads are full of potholes. You’ve got front and seat suspension and heavy-duty wheels and tires that really smooth out the ride.

You’ve also got front and rear racks for storage. I wouldn’t load up the front too much (maybe a purse or small backpack)but you can really pile on the rear rack with some saddle bags. Shopping for groceries? Not a problem.

Again the quality and strength of these components (listed below) from wheel to wheel is top-notch.

The Supercharger is great but…

The price and weight of the Riese & Müller Supercharger puts it into a very unique niche. As someone who owns two Teslas, I’d still have a hard time justifying a $7500 bike (hey, here’s what you can spend your tax rebate on!)

Also, I don’t think I’d ever need the second battery unless I went on some sort of long distance century ride. I feel like 20 miles is a good high-end target to hit with e-bikes even though personally I could probably get by with 5-10 real miles.

The weight also makes this a hard sell for folks who like to throw their bike in the back of the car and hit the trails or live in a walk up or commute to a city. Those big, quality components put it closer to a moped than a mountain bike. You’d almost want a trailer to haul this thing around on.

But all of those caveats aside, this was an incredible bike to ride and makes me very excited about the future of e-bikes and even light duty e-scooters and motorcycles which I think are going to start blowing up.

The specification table indicates all available components for this model – not just the basic equipment. Some of the options listed are only available for a surcharge. For more information, see the configurator. Riese & Müller reserves the right to make technical modifications as well as changes to the shape, colour and/or weight within reasonable limits.

* May differ depending on the design or configuration of the model