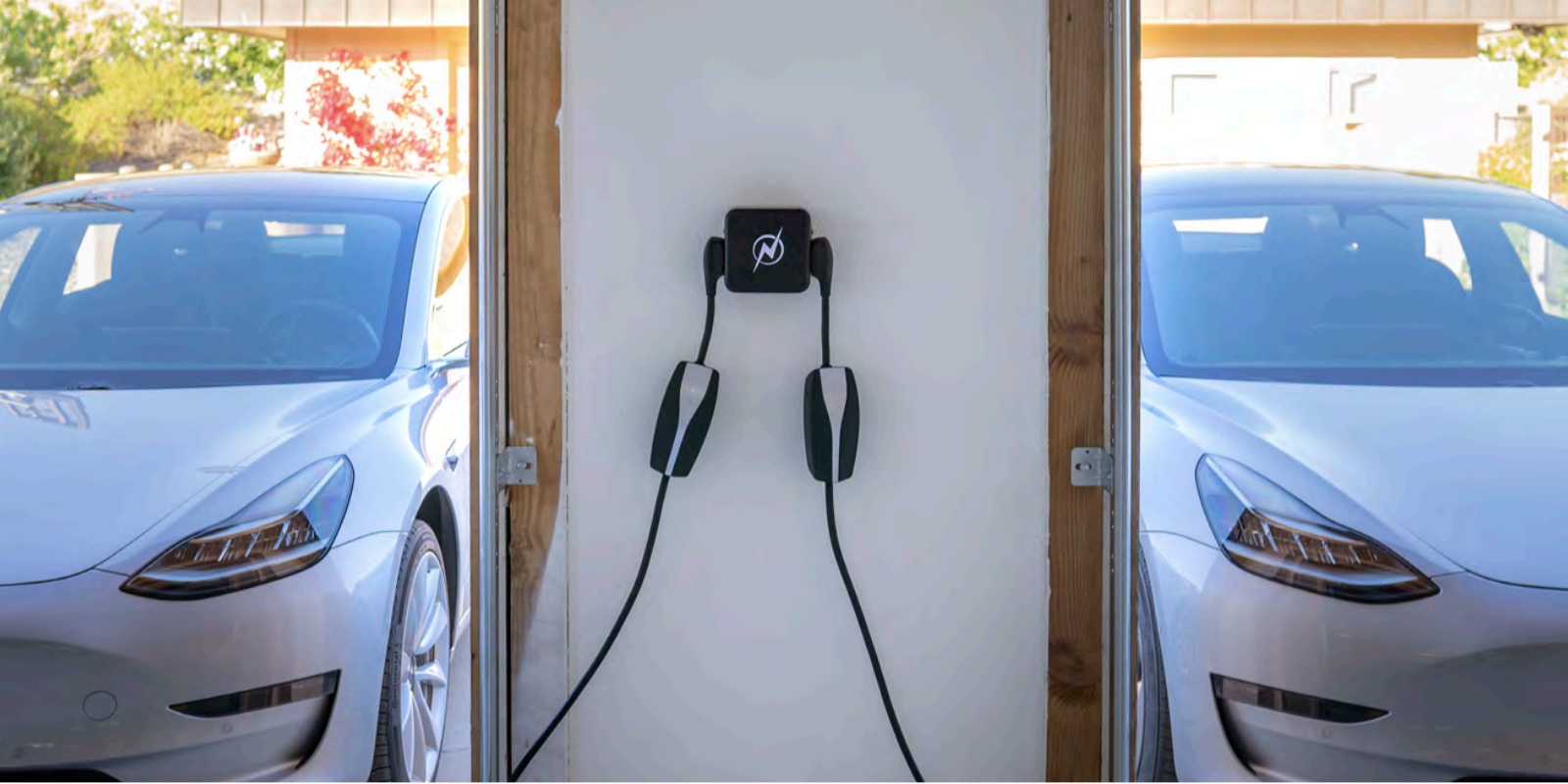 If you are an EV owner with a dryer in your garage, you’ve probably dreamed up the NeoCharge product already. And if you have a second EV, you’ve surely needed one rather than calling an electrician to run a second 240V line. What is this black magic device, exactly?

NeoCharge isn’t just splitting the outlet into two plugs. Simply splitting the outlet could be hazardous and would probably/hopefully trip your breaker as soon as more than 40A of power was drawn, so as not to burn down your home. The intelligence lies in the adapter’s ability to choose which outlet to send power — and how much power to send.

There are two plug outlets: A default port that gets the power as long as it wants to draw it, and a second port cranks up when the first port no longer draws large amounts of electricity. So there’s always enough power on both ports to keep the lights on in the devices, so to speak.

In an appliance/car situation, you would put the laundry dryer on the main line and the car charger on the secondary line. When car charging, the dryer would draw enough power to be powered up, but most of the power would go to the car charger. At the point where you actually needed the dryer, the NeoCharge would flip over to the dryer for the duration of its usage. When the laundry cycle is complete, it would continue back to car charging. If you needed an emergency charge, you’d simply turn off the dryer.

In a dual car situation, the primary plug would keep EV #1 charging until it was fully charged and then flip over to EV #2. During the course of the night, EV#1 might take two to six hours to charge to full. Then, in the middle of the night, the charger would flip over and start charging the second car theoretically until full. This would allow you to charge only at night when rates are lowest. Or conversely, if you have solar, you could charge during the day if you wanted.

NeoCharge is also portable, so we could take it to our vacation home if we needed dual charging there.

Obviously, NeoCharge can be utilized for two separate appliances. But that’s not our beat.

So at $429-$479 for the NeoCharge, you aren’t saving a ton of money over installing a second 240 outlet. In fact, if your breaker box is near or inside the garage and you are on good terms with an electrician, a NeoCharge might be more expensive than installing a dedicated second 240V outlet.

But if your breaker box is getting full, the NeoCharge saves you from adding another expensive 240V outlet and might save you the cost of a breaker box upgrade. That’s going to be hundreds if not close to a thousand dollars in savings.

If the 240V outlet is a long way from the breaker box, like in a parking lot, for instance, the NeoCharge will be much cheaper than running a second line.

I have an even bigger problem: I’m looking to install a geothermal system in my home, and the added potential electricity usage there could bump up against the 200 amps I’ve got coming into my home from the street. If I added another 240V car charging outlet, I’d need to run another line from the street, which would be thousands of dollars, if not more. So having this NeoCharge option would really save me a ton of money, time, and effort.

We currently just share the single 240V Level 2 Tesla charger and plug in a Level 1 charger if we both need a significant charge at the same time. Because we are both working from home at present, that mostly works fine. However, Con Edison, our electricity supplier, has a lucrative awards program for only charging from midnight to 8 a.m. The Level 1 charger can’t deliver a full charge in those eight hours, so I get dinged on much of my energy usage. I estimate I’ll get about $100/yearly in rewards by charging with the extra 240V line.

For some reason, as soon as the 240V/40A wires start getting used, I become much more afraid of a fire. And since our garage is right below our bedroom, this is a heightened concern. Thankfully the NeoCharge is UL- listed, 24/7 support, and backed by a two-year warranty.

NeoCharge makes three versions for the different types of 240V outlets and 30-50 amp breakers out there. If you are car charging and want to “future-proof” your situation, I’d recommend going with the more expensive 50A version. I should note that you can use adapters off the NeoCharge. For instance, if a friend came over to charge, you could unplug your dryer and plug in his car with a separate car charger that would likely require a Nema 10/14-30 to 14-50 adapter.

One of the perks of this job is that I get to review things like this and see how good they work in real life. At the same time, I’m solving my life problems. NeoCharge has a 14-50 version they are sending my way to put through the real-world paces. I’ll do a review of that within a month to see how things go.

But at $400+, I don’t think this product is for everyone. If my breaker box is close to my garage and has room for another outlet, I’d rather spend that $400 on and electrician installing another outlet or even hardwiring a second level 2 charger into my garage. If the price for this thing came down toward the $100-$200 Dryer Buddy range, I think it would be a bit more of a no-brainer type of purchase, especially to add to my travel adapter arsenal. Additionally, I could see it start to be bundled with charging stations like ChargePoint or Juicebox.

Buy NeoCharge for $20 off with code ELECTREK