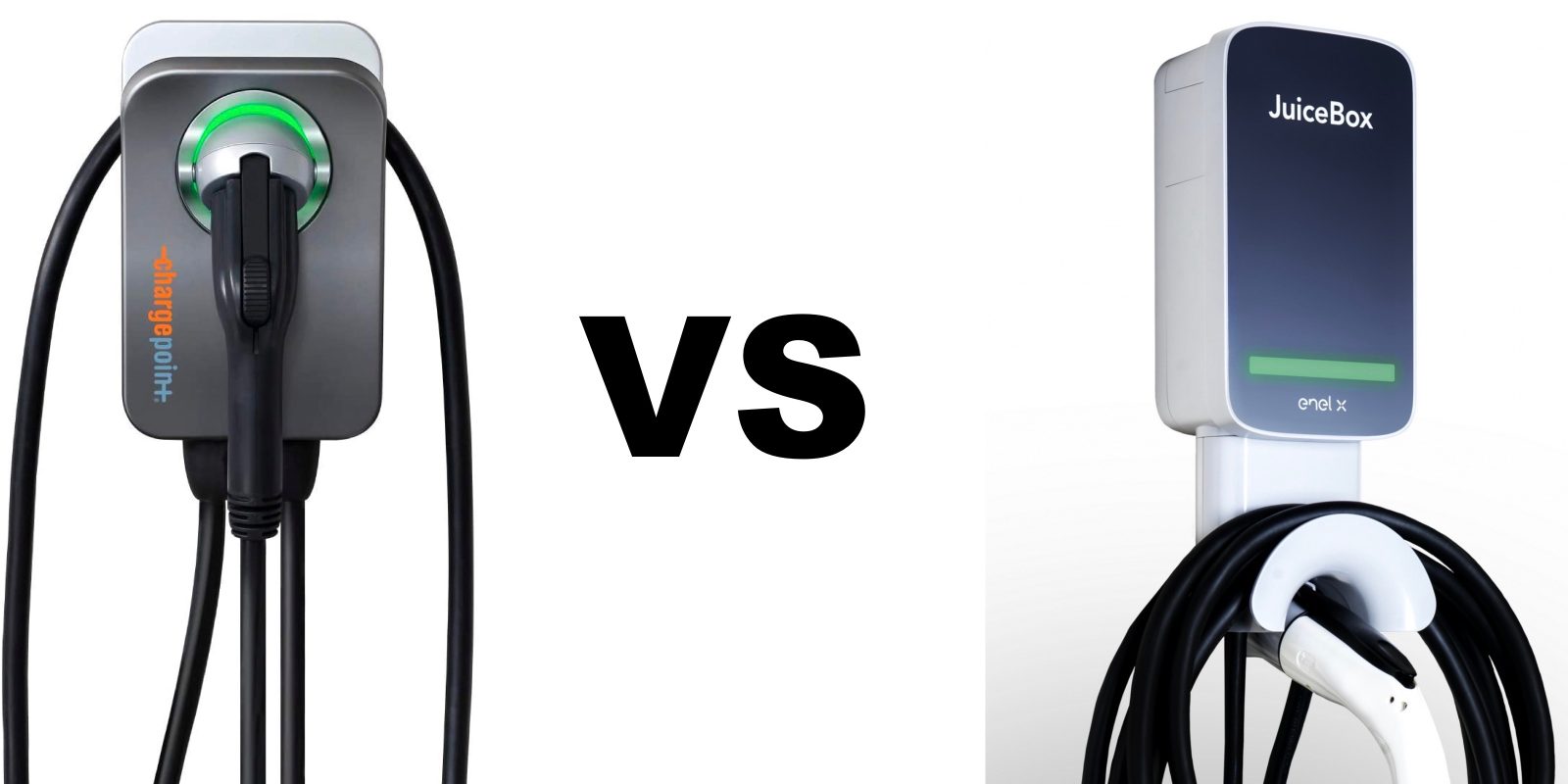 There are a ton of low-end and mid-tier home EV chargers on the market and frankly most will do the job of getting your EV charged without burning your house down. But on the high end, there are really only two I would consider buying today: The Enel X JuiceBox($599) and ChargePoint Home Flex($699).

Both of these products come from established EV charging product makers and have Wifi connectivity for updates and monitoring your charge. Spoiler alert, I can easily recommend either but they do have some significant differences so prepare for a deep dive. And if you are a Tesla owner, a Tesla wall adapter might make more sense but these can save you money…

Both the Enel X JuiceBox and the Chargepoint Flex offer both hardwired and Nema 14-50 plug options. If you opt for the hardwired versions, you’ll probably want to have these installed by a licensed electrician from the breaker box to the mounting point.

I usually recommend using plugged versions and that’s what we’re reviewing today. Having a plug allows you to swap out chargers easily if it goes bad or if you decide to upgrade or move out. The downside is that the ’50’ in NEMA 14-50 stands for 50 AMP breaker. US code says that you can only install 40A lines here so you won’t get to use the ChargePoint Flex up to 50 amps. 40 amps should be fine for most Level 2 uses, however.

Nema 14-50 plugs are the same type of plugs that most laundry dryers and ovens use so all electricians will know how to install one and shouldn’t charge any sort of premium. That doesn’t mean they won’t try. If they say there is an EV surcharge, just let them know you are instead installing a dryer in the garage. Depending on how far the line needs to go from the breaker box, the install shouldn’t take more than an hour or two. My charging area is only a few feet from my breaker box so it took only about 45 minutes to install. Running one outside my last home took about 2 hours. If you are installing outside make sure you get a weatherproof enclosure.

Setup for both is very easy, though I would say Enel X makes the process a little more straight forward. Both have a bracket you screw into the wall and then connect up the charger.

Both the new JuiceBox 40 and Chargepoint Flex are great-looking with a holster for the charge handle and a place to wrap the cable. ChargePoint’s design is a slight update on its previous model while JuiceBox is a complete overhaul on its previous “box-y” design that didn’t include a holster or place to wrap the cable. Enel X did a great job after buying the company Emotorwerks.

ChargePoint Home Flex comes with a 23-foot cable which is slightly smaller in diameter than a typical garden hose. The JuiceBox has a slightly longer cable at 25 feet. Both of these cables are significantly longer than the cables that come with most EVs including Tesla’s Wall charger which is at 18 feet. That means if you are a 2+ EV family like ours, you can easily charge 2 vehicles without having to move them out of the garage which is a big plus.

Both chargers have helpful lights to show the state of charge, and the JuiceBox adds a key lock function on the charge handle which might be a good way to lockout prospective siphoners if this is going to be put outside in a public space.

One big difference for me was the lead Nema 14-50 plug cable length. We recently had our garage’s electricity re-arranged (New Powerwalls!) and there isn’t much room around the plug to mount a charger. ChargePoint only had a ~1-foot long cable where the Motorworks had a 3-foot cable, allowing us to properly mount the JuiceBox without having to relocate the plug. The Chargepoint was just sort of dangling there. I imagine this is an edge case but take it for what it is worth.

So far we’ve talked about hardware but the true differentiator between these products and other chargers out there is the software and connectivity. Both easily allow you to schedule your charging for certain times to save money. I’m on the New York area ConEd/Smartcharge plan with Fleetcarma. It nets me about $50-150/month in savings across 3 cars so it is no joke. All I have to do is make sure my car charges only from midnight to 8am and I get 10 cents per kwh or $10 every time I fill up my Tesla. Once the charger is connected to the app through Wifi, you can set up these kinds of schedules and of course override in an emergency.

This is where these 2 products really shine. Both apps are super helpful in getting charging information, helping to make better charging decisions that can save money. Enel X even has an Electrek news feed!

Enel X JuiceBox is very much focused on home charging: 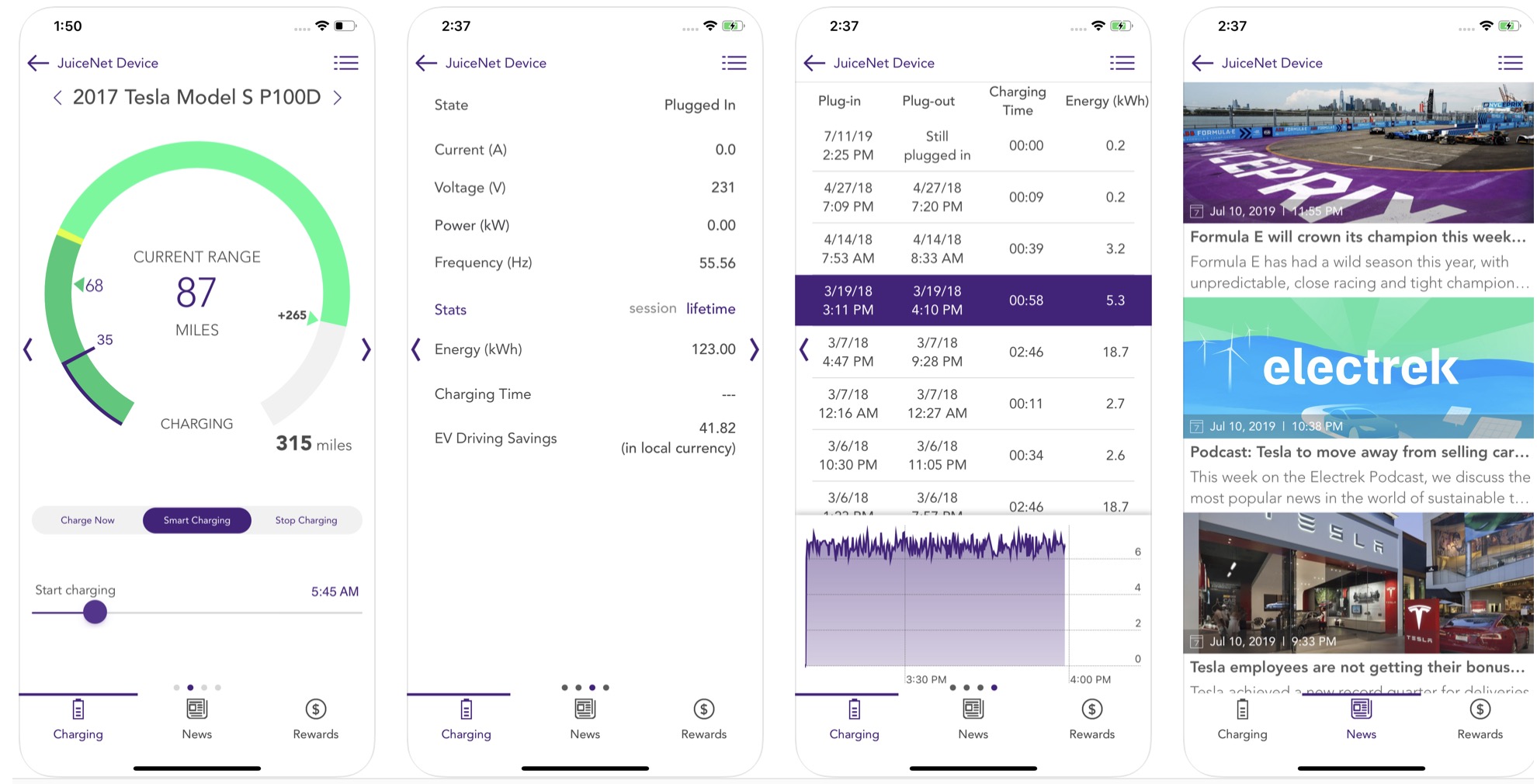 Meanwhile, ChargePoint’s app is focused much more on destination and DC charging. In the hamburger menu, there is a dropdown for your home station. The app from there is nice but where it lacks details of Enel X app, it makes up for in its Apple Watch App and iPad. ChargePoint also has Siri shortcuts and Alexa for start and stop charging. Here’s a look at the Apple Watch Functionality (again focused on destination/Fast charging, not home charging):

Teslas and most other EVs do a lot of this in the car app so you can often schedule charging there as well.

The next frontier here is having the energy companies connect directly to your charging station so they can read your energy usage and reward you for charging off-grid. Even better, they could be offered to control when your car charges so they can effectively manage their grid more efficiently – so long as your car is fully charged when you need it. Enel X has a leg up here because they are also an energy company and they are already starting trials in other areas. ChargePoint is also working in this area to bring the cost of home charging down.

I did have some hiccups along the way with both products.

I didn’t have any issues setting up the JuiceBox but because of an order of operations issue, the ChargePoint defaulted to a lower charging speed. I had to redo the setup with the plug unplugged to get it to go to 40 Amps on my Teslas (it can only go to 48-50 Amps on the hardwired version).

Meanwhile, the JuiceBox setup was pretty clean and easy but every once in a while, the charger would drop from 40A to 30A in my Model X. I never had this problem with my Model 3 and the Model X has had the issue in other scenarios so I’m lead to believe the issue might be an over-sensitive fault sensor in the Model X.

The Chevy Bolt only charges at 32A and I never had a problem charging it at full speed.

Chargepoint touts the Home Flex as “future proof” because it can go all the way up to 50A but there are some other areas where I could see some improvement.

I think from the hardware side, cable extraction and retraction should be a focus. I’d love a spring-loaded hose wrapping option (here’s a non-integrated one you can add on). This would really clean up the look and feel. Making these ceiling-mounted would be even better.

Also, ChargePoint did it better but a more flexible cable that was a bit smaller (like Tesla) would help.

I’d love to see a dual charger option like Clipper Creek does in these chargers. Clearly this is more future proof when every suburban home will have at least 2 EVs in the future.

Tesla button and port compatibility: It isn’t a huge hassle but having that button sure makes opening Tesla’s charge port easier. It would be nice if other OEMs started using this. Also, Tesla’s port adapter is easy enough to use but you can’t then plug it into the holster without removing the adapter. There has to be a better solution here. In Europe, Tesla has gone to CCS combo on its cars, maybe that will happen in the US too. Until then, I just leave the adapter on the charger and slank it over the top of the unit. Ugly but effective.

For my particular scenario, I’m going to go with the JuiceBox. I need to charge non-Tesla EVs like my Chevy Bolt and don’t want to use the J adapter so that automatically disqualifies Tesla’s products. But even if it didn’t, I like the longer cable of the JuiceBox and Chargepoint Home Flex which allows me to charge 2 different cars in my garage without having to move the vehicles. The downside is that when using a non-Tesla charger, you have to open the charge port without the convenient button – a minor hassle.

As I said before, both of these products are very worthy additions to your EV centric home. However, the Enel X JuiceBox fits my needs better in a few important ways:

ChargePoint does have some better features, however:

Overall, you can’t really go wrong with either one of these chargers, particularly for multiple EV homes. Buy here: Chargepoint Home Flex is $699. Enel X JuiceBox is $599.