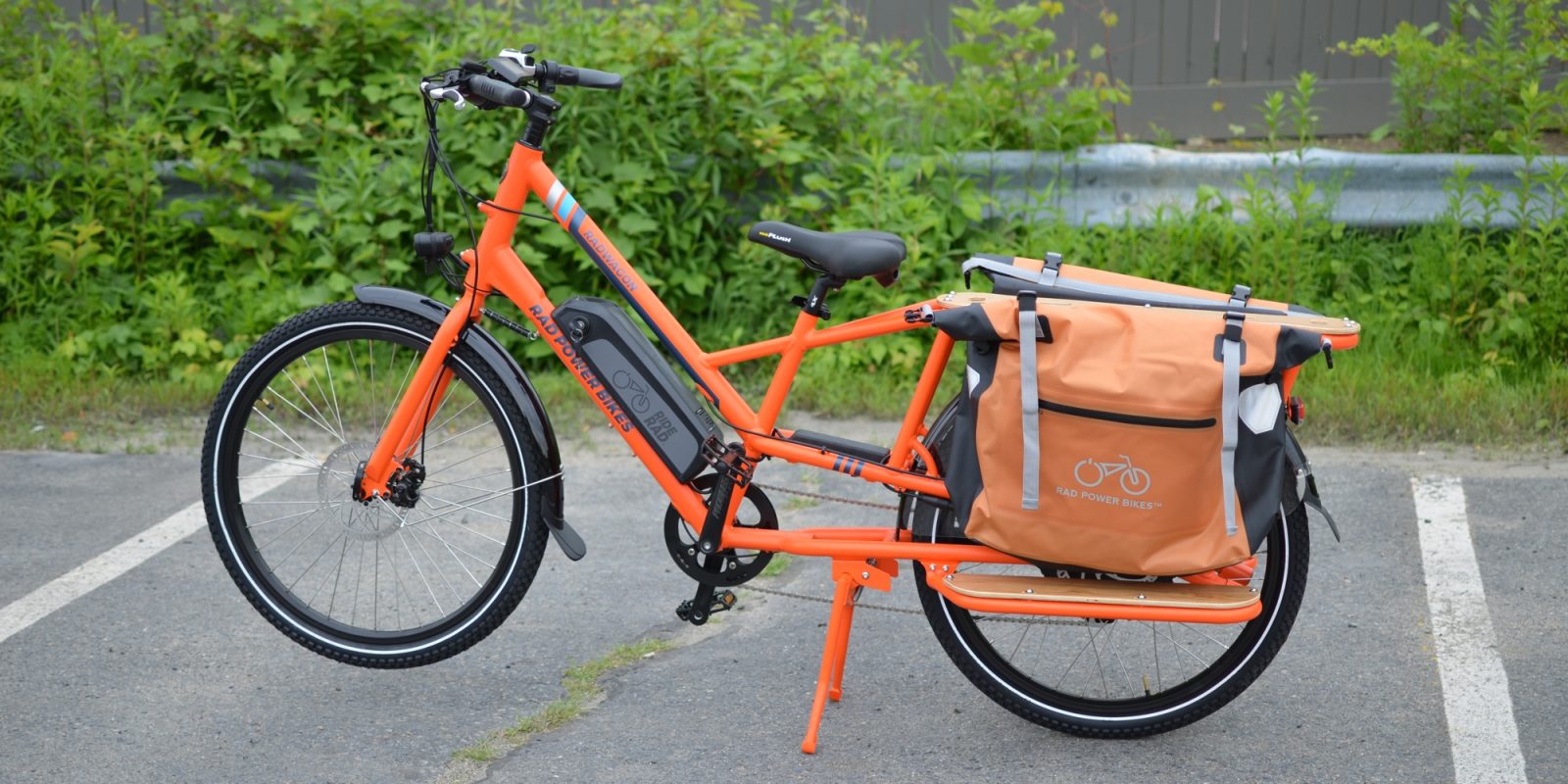 We’re no strangers to Rad Power Bikes around these parts. And so it was with glee that we jumped on the opportunity to review Rad’s electric cargo bike offering, the RadWagon. And just like with Rad’s previous electric bicycles, I’m left wondering how a company can possibly sell such good e-bikes for so little cash.

Electric cargo bicycles are a special breed of e-bike. They have to be built stronger and tougher than most bikes, yet remain maneuverable enough to avoid handling like a park bench. And of course, they have to fulfill their original duty of carrying as much cargo as possible.

And if it’s not too much to ask, it’d be great if they looked pretty cool while doing it.

Somehow, Rad Power Bikes has managed to check all of those boxes with its RadWagon electric cargo bike. 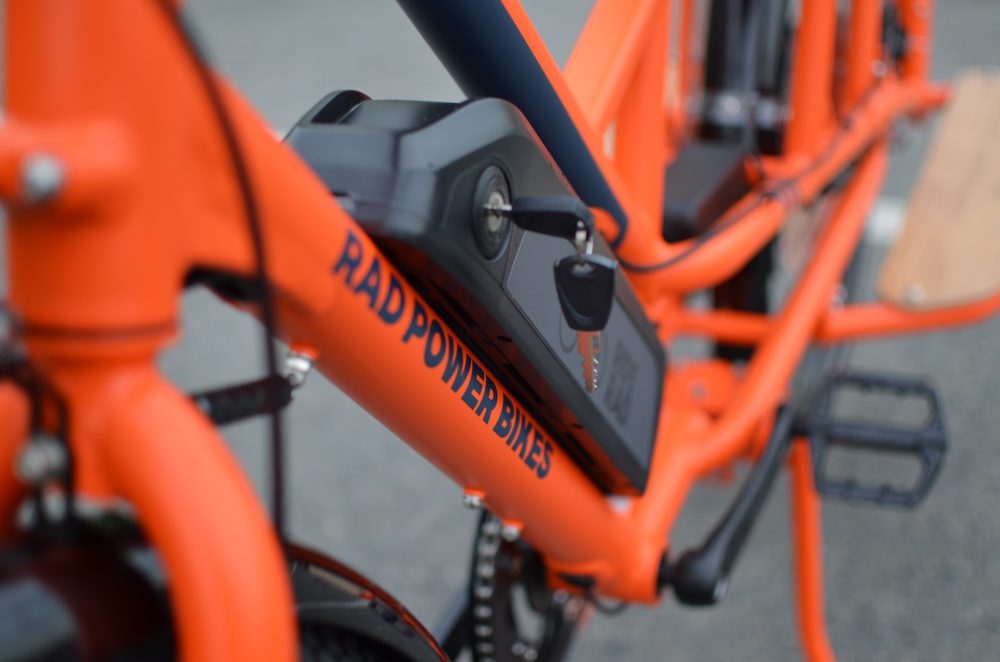 Check out my video review of the 2019 RadWagon below. Then read on for more details on the e-cargo bike.

Let’s start off with the nuts and bolts here.

The RadWagon is a great example of cargo utility without much compromise on aesthetics.

For starters, you get a powerful e-bike with a 750 W direct drive hub motor. What’s the peak power rating? I’m not sure, but we’re probably looking at something north of 1 kW under full loading of the motor. It was enough that the bike never felt sluggish to me, even while riding around with two people on it.

Sure, it’d slow down a bit when going up hills, but what consumer-level electric bike doesn’t?

And while I’d sure love something higher than a 32 km/h (20 mph) speed limit, I’ve found that when you’re loaded down with weight, you don’t really want to be going faster than that anyways. So the speed feels appropriate. 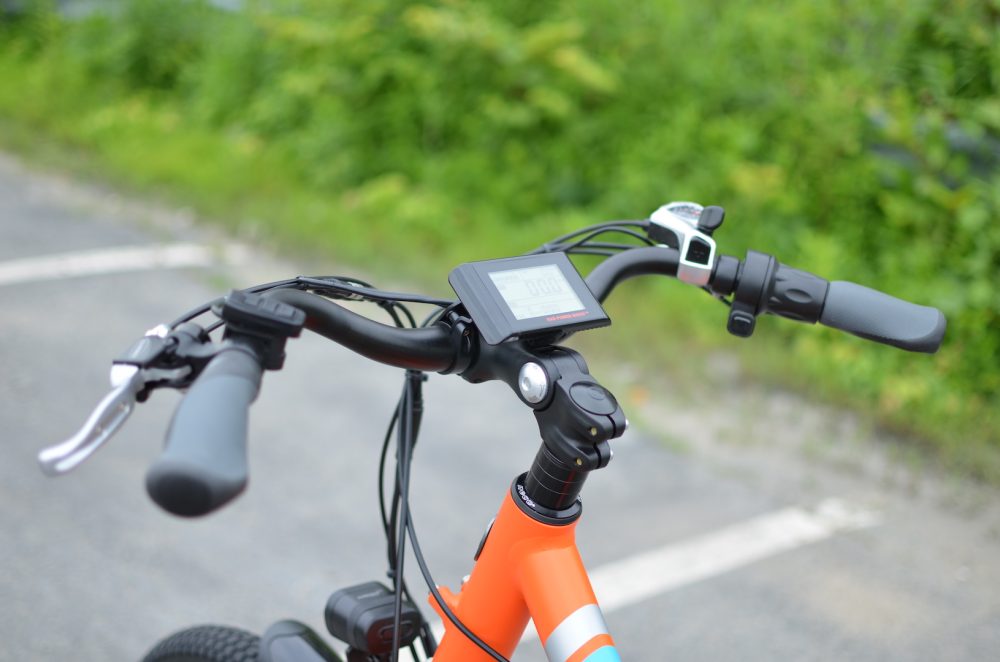 The RadWagon uses the same interface that we saw on the RadMini and the RadRover. The LCD screen is easy to read, the half twist throttle is comfortable, and the whole bike just feels well matched. There’s nothing on here that screams top-shelf quality, but there’s also nothing that seems cheap or ready to break. For the $1,499 price tag, it all feels appropriately spec’ed.

Where the RadWagon really shines is utility. If you need a bike to take the kids to school or carry all of your weekly groceries, this is likely the one. With a weight limit of 159 kg (350 lb), the bike can carry nearly anything you throw at it. The rear rack alone is rated for 55 kg (120 lb), which I’m told is equivalent to a handful of small children.

My wife and I don’t have kids because we’re still enjoying playing life on easy mode, and so I tested out the optional seat pads by riding around with her on the back. The running boards turned into footrests for my wife, and I added the handgrip accessory to give her something to hold onto. The report? It’s not quite as comfortable as a gel bicycle seat, but it definitely gets the job done. We had a blast riding it around together, and we’re both what most people would consider “adults.” Imagine a couple of squealing kiddos having a good time back there!

One thing I will say is that the bike definitely rides different when you’ve got the weight of a second full-sized rider in back. It’s still manageable, but you notice how much longer the bike feels. Without a passenger behind you, the RadWagon does a good job of making you forget that you’re riding a stretched cargo bike — until you go to park it. But with a second rider, suddenly the bike feels longer and you notice yourself anticipating movements like turning and braking sooner. But that’s just the nature of the beast I guess.

When you’re not giving your life partner or little life obligations a ride, the rear rack is simply cargo heaven. It comes standard with a beautiful wooden deck and matching running boards. That’s enough for a lot of cargo situations and you can easily strap cargo or other gear to the rack or running boards. But when you’re ready to step it up a notch, you can check out the wide range of accessories offered by Rad Power Bikes.

I added a couple of Rad’s huge cargo bags to each side of the rear and they added to the bike’s utility immensely. Instead of strapping things down, I could just toss my gear in the roll-top bags. They are waterproof so I don’t have to worry about my gear getting wet and they are incredibly spacious. Even when grocery shopping I never filled them all the way. But even if I did, there’s still plenty of room left on top of the rear rack. I also like that the bags collapse down flat so they almost aren’t there when you don’t need them. When my wife would ride with me I didn’t even have to remove the bags – they’d just smoosh down under her legs. 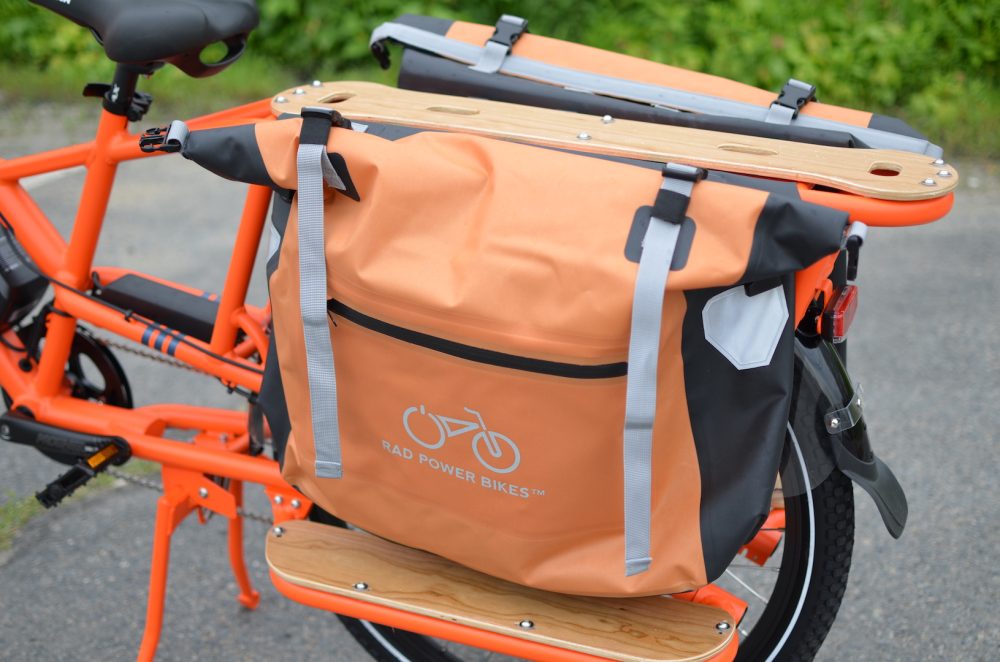 I find it really hard to knock the RadWagon on anything, to be honest. I always try to be fair in my reviews and point out what I love and what I don’t. For the RadWagon, the first category significantly outweighs the second. If pressed, I guess I’d love to have a suspension fork up front and hydraulic disc brakes. Of course, I’m sure either of those options would wipe out most of the RadWagon’s profit margin. As it is, I don’t know how they can sell this thing for just $1,499. The next best cargo bike I’ve ridden, the Cero One, costs nearly three times as much. And other budget electric cargo bikes don’t seem to beat the value of the RadWagon, at least from where I’m standing.

Basically, I just can’t really fault the RadWagon for much of anything. While it won’t beat $6,000 e-bikes on quality, it offers a level of build that far outweighs its meager price.