Should plug-in hybrids be forced into EV mode in cities? Fiat tests the tech

Many automakers seeking to comply with stringent emissions rules are selling plug-in hybrids instead of pure electric vehicles. And yet there’s no guarantee that plug-in hybrid owners will regularly plug in. The answer could be a geofence system that automatically forces off the combustion engine when a plug-in hybrid enters a city zone. Fiat Chrysler announced today that it’s testing that technology in Turin, Italy.

Automakers are divided on whether plug-in hybrids are a necessary bridge technology or just a way to stall on launching pure EVs. General Motors and Volkswagen have sworn off plug-in hybrids as a long-term play. But Fiat Chrysler (FCA), Toyota, Ford, and others are believers in PHEVs. So are Germany luxury makers ­— Audi, BMW, and Mercedes-Benz.

Regardless of how EV fans see plug-in hybrids, they will be sold in increasing numbers in the coming years, especially in Europe, where PHEVs help qualify automakers to meet CO2 standards.

FCA’s Jeep brand will launch plug-in hybrid versions of the Renegade and Compass this summer. So it’s not surprising that Fiat Chrysler is piloting a project in Turin to allow its hybrid plug-in cars to automatically switch to electric-only mode when entering congested city centers. It’s essentially a compliance strategy.

FCA has been among the slowest automakers to adopt EV technology, although it has promised an all-electric Wrangler, as well as a plug-in hybrid version that could be sold in the US.

If FCA/Jeep can prove that its geofence system is effective, then the vehicles could qualify for access to cities with congestion zones and special parking spaces, according to Reuters. 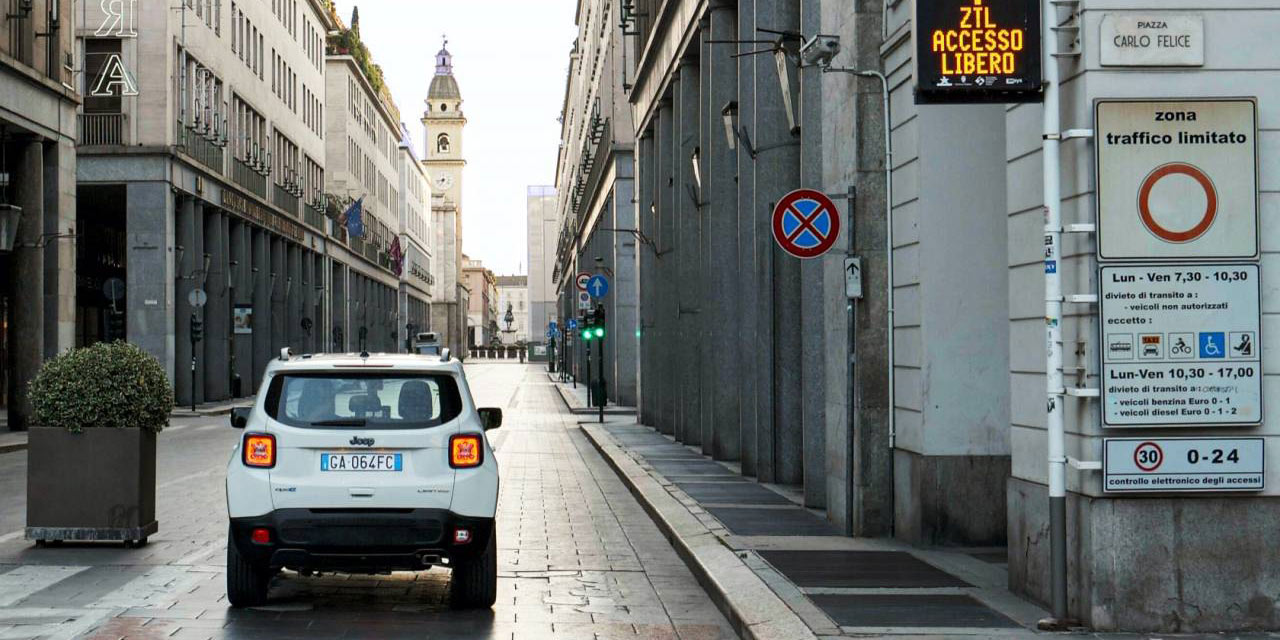 BMW tested a similar system last year in Rotterdam’s “electric-only” zone. But that system was strictly a smart-phone notification, asking that drivers manually turn on EV mode. The Dutch government removed PHEV incentives after an analysis of fuel-card data showed drivers were not recharging them and just using them as conventional no-plug hybrids.

The second best-selling plug-in car in the US last year was the Toyota Prius Prime. And the company will soon begin selling the $40,000, 42-mile Toyota RAV4 Prime. In most parts of the country, plug-in hybrids qualify for rebates and other perks, like solo access to carpool lanes.

In California, to qualify for perks, a plug-in hybrid must be rated with at least 35 miles of all-electric range. But there’s no provision to ensure that they ever operate in electric mode.

The climate credentials of plug-in hybrids are directly proportional to how much they drive on their electric motor. If, as the evidence seems to show, most people don’t charge them, then they are worse than previous-generation cars.

We call them fake electric cars.

Other plug-in hybrid owners are dedicated to daily charging. Many use only a few gallons of gas per year.

Regardless, there’s a growing list of plug-in hybrids rolling out this year in Europe ­— and qualifying for “super credits” and consumer incentives. As one example, Ford is making the plug-in hybrid Kuga crossover the cornerstone of its strategy to meet European CO2 standards. Mercedes introduced three new plug-in hybrid models this year. And BMW created its flexible vehicle architecture so that it could equip its models with either plug-in hybrid or EV powertrains.

As batteries improve over time, plug-in hybrids will give way to pure EVs. Analyst-firm LMC believes that 2020 will be the last in which PHEVs outsell EVs in Europe.

Until that happens, why not use technology — like the one being tested by Jeep — to make sure plug-in hybrid makers and drivers aren’t cheating the system? Or perhaps it’s time to remove incentives from plug-in hybrids, using those resources to encourage the shift to pure electric cars.