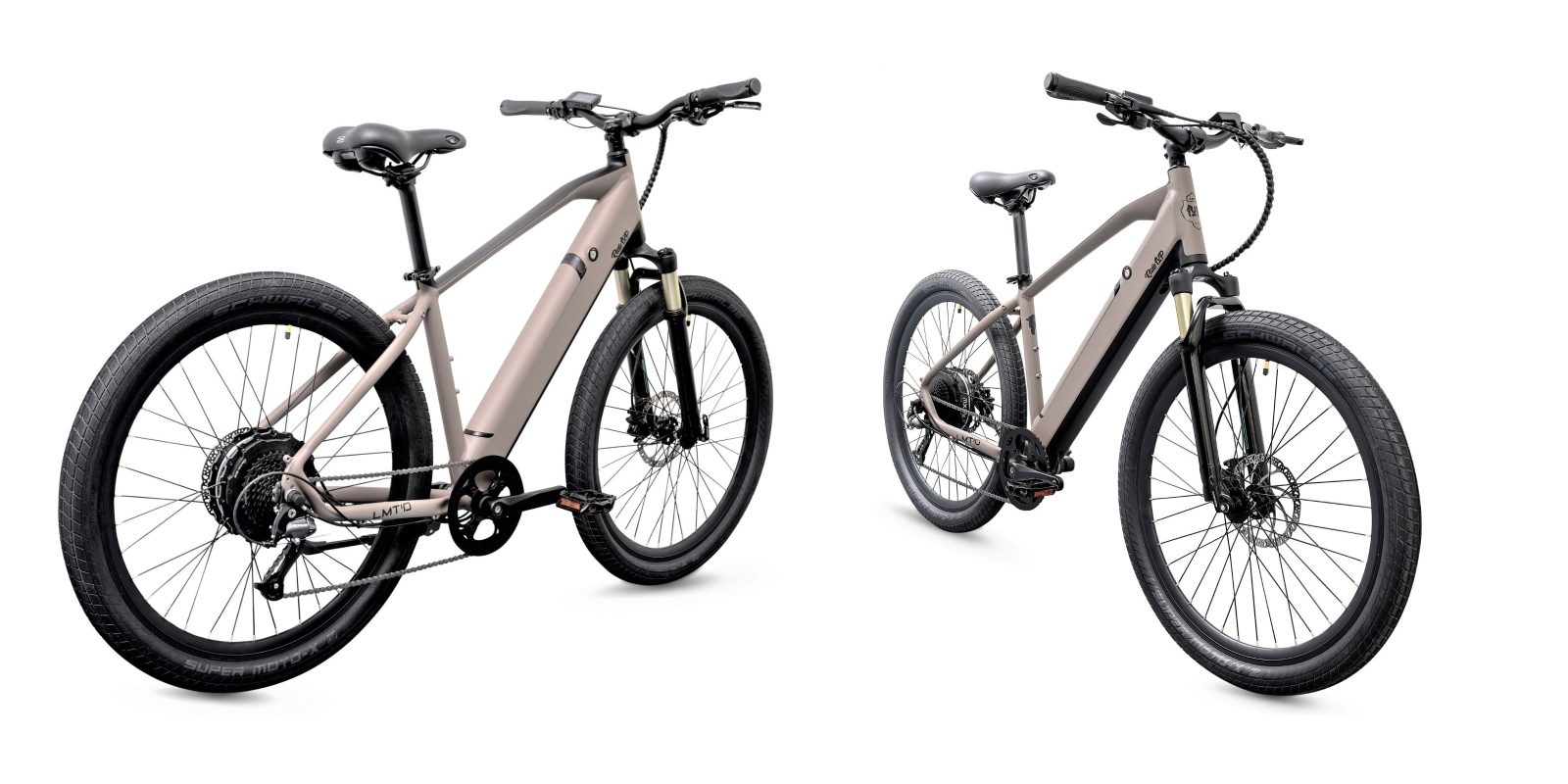 The San Diego-based e-bike company Ride1Up has just announced two new models of electric bicycles. The new Ride1Up Core-5 returns a sub-$1k e-bike to the company’s lineup, while the Ride1Up LMT’D offers the highest torque e-bike yet from Ride1Up.

Ride1Up has focused largely on the commuter and hybrid e-bike category. You won’t find fat tires or full suspension or stretched cargo frames. What you will find are street-optimized bikes that prioritize utilitarian riding.

The company’s $1,195 Ride1Up 500 Series e-bike, which we recently reviewed, is one of the best-value e-bikes out there currently.

And now they are bracketing it with two new models, one with an even lower price and the other with higher performance.

The bike includes a 500Wh battery based on LG battery cells. The pack disappears into the downtube, yet is removable for charging off of the bike. With the exception of that rear hub motor, it almost doesn’t look like an e-bike. Almost. 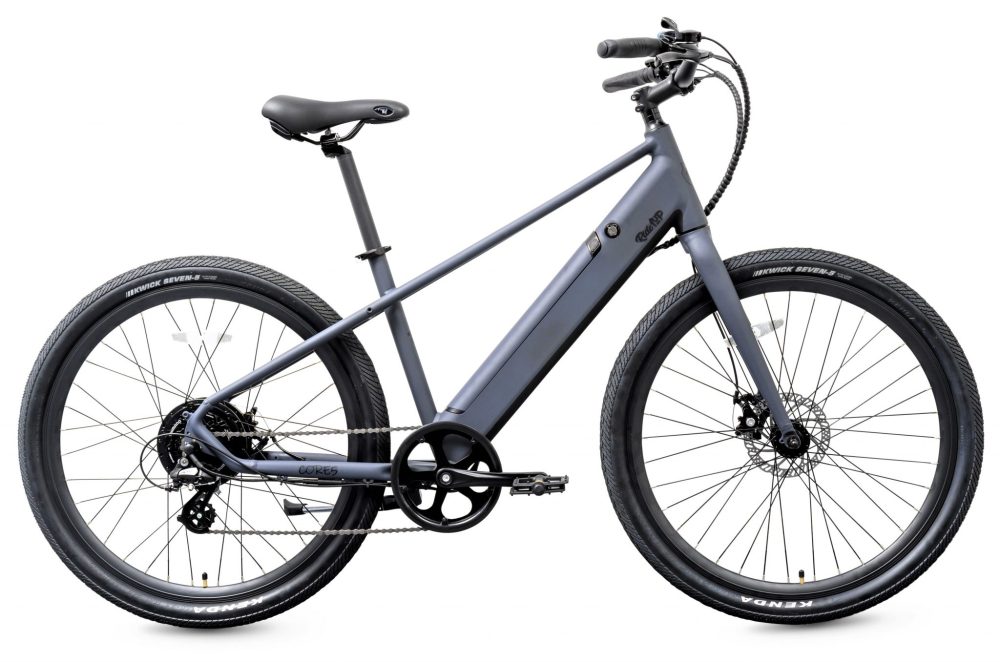 That battery is rated for a range of 20-40 miles (32-64 km), depending on whether you’re rocking pedal assist or throttle. The Core-5 includes a single cadence-based pedal assist sensor and five levels of pedal assist power, while the handlebars also sport a left-side thumb throttle for non-pedaling riding. Riders can hit 20 mph (32 km/h) with the throttle, while the highest pedal assist level unlocks the Class 3 speed of 28 mph (45 km/h).

For braking power, the Core-5 gets a pair of Tektro mechanical disc brakes with 160 Nm rotors. Nothing fancy there, just standard stoppers.

The 7-speed drivetrain actually offers a Shimano Altus derailleur though, which is a step up from the entry-level Shimano components normally found on bikes in this low-price class. Two frame sizes are available with different standover heights to accommodate both shorter and taller riders. 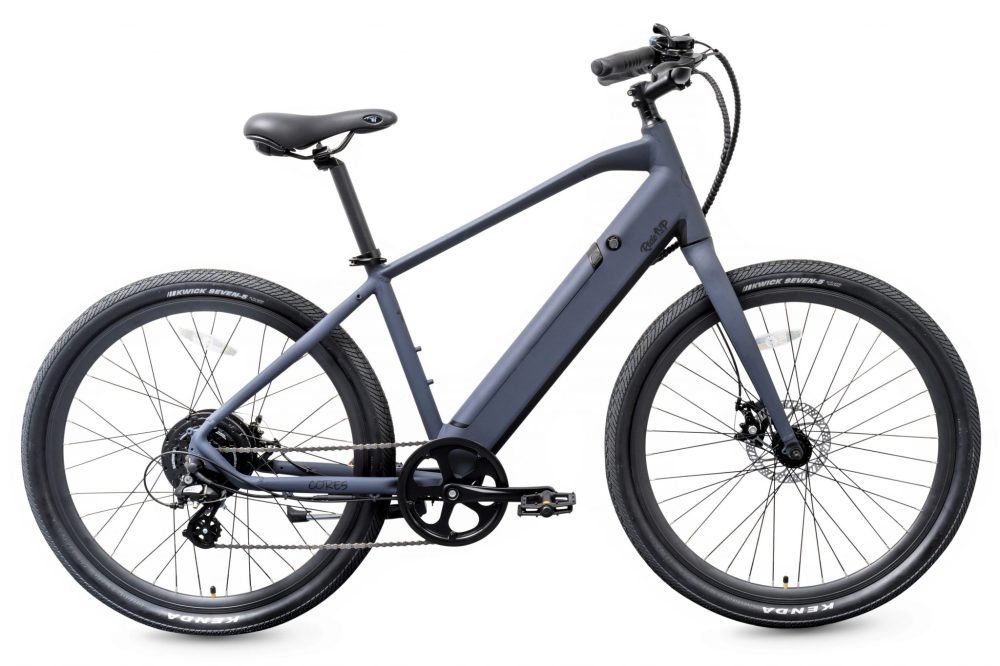 The Ride1Up Core-5 looks to be positioned as a value-oriented commuter e-bike. There’s no suspension, no fenders or rack (though those can be added as accessories) — it’s just a no frills e-bike.

Riders seeking more power and higher-end components will want to check out Ride1Up’s other new bike, the LMT’D.

On the more premium end of the spectrum, the Ride1Up LMT’D offers a number of upgrades while retaining a similar commuter-friendly frame. Those upgrades bump the price up to $1,795.

The beefier 750W continuous and 1,000W peak motor puts out an impressive 100Nm of torque. The speed is still limited to 28 mph (45 km/h) on pedal assist or 20 mph (32 km/h) on throttle-only riding, but it likely hits those speeds quicker due to the higher torque, which will also likely give it better hill climbing power. In addition, the LMT’D gets a true torque sensor for the pedal assist, which gives smoother and more comfortable power application that works better on starts and varied terrain like hills.

The battery is larger than the Core-5’s battery, measured at 672 Wh. It also sports Samsung battery cells.

The brakes have been upgraded to dual-piston Tektro Auriga hydraulic disc brakes with 180 mm rotors, and the fork is an RST Asteria air suspension model with 90 mm of travel.

Where the rubber meets the road, the Ride1Up LMT’D gets Schwalbe Super-Moto X 27.5″x2.4″ tires. The 8-speed drivetrain uses a Shimano RD-M370 derailleur, which is another jump up the parts quality hierarchy. The Ride1Up Core-5’s standard LCD display gets upgraded to a full color display on the Ride1Up LMT’D.

Both bikes begin shipping in June and are available now for pre-order.

I wasn’t expecting any new e-bike models from Ride1Up after the recent release of their popular 700 Series earlier this year, so word of their two new models came as a pleasant surprise.

While the Ride1Up Core-5 is certainly rocking entry-level parts, they aren’t bottom of the barrel either. Most affordable e-bikes seem to either offer folding frames or ultra-cheap components. So for someone who can’t afford to spend more than $1,095 on an e-bike but still wants a full-size, decent e-bike, the Core-5 looks promising.

The LMT’D looks really interesting though. A nice air fork, 100 Nm of torque and a real pedal assist torque sensor are all indications that this one will have a very nice ride. Those hydraulic brakes and medium-level drivetrain components are also nice additions not normally found on e-bikes in this price range.

Basically, both of the bikes seems to offer higher quality options than you’d expect at these prices, so I find both of them to be promising options. At least that is my impression based on the spec sheets.

You can be sure we’re working on getting our hands on them for a full review as soon as they are available. In the meantime, you can check out our previous favorite Ride1Up e-bike, the 500 Series, in our review video below.