Tern, known for its small size yet heavy-hitting e-bikes, is back with a new cargo utility bike: the Tern HSD.

This little guy is rated for more weight than I probably ever need to haul, and is a great example of a utilitarian e-bike that can serve as a second car for many city dwellers.

When Tern first announced the HSD earlier this year, I was pretty giddy.

I already loved the GSD e-bike that I had test ridden at Interbike last year. It was a small-ish cargo e-bike with huge potential. A 400 lb (181 kg) load rating and a long, utility rack on a bike that could be parked vertically in the space of a potted plant – that’s my kind of e-bike!

But if anything, it was almost more than I needed and certainly more than I wanted to spend.

Then Tern announced the HSD, which was essentially the GSD’s little brother. It kept all of the useful aspects of the GSD but just dialed back the crazy specs a bit. And after getting the chance to take my first ride on the Tern HSD at Eurobike 2019, I’ve definitely come away impressed with the bike.

Check out the tech specs below, as well as my test ride video. Then keep reading to see my thoughts on this little e-bike that could.

I rode the mid-tier HSD, known as the HSD S8i model. In my opinion, it’s the best model in terms of bang for the buck. Here are the S8i’s tech specs: 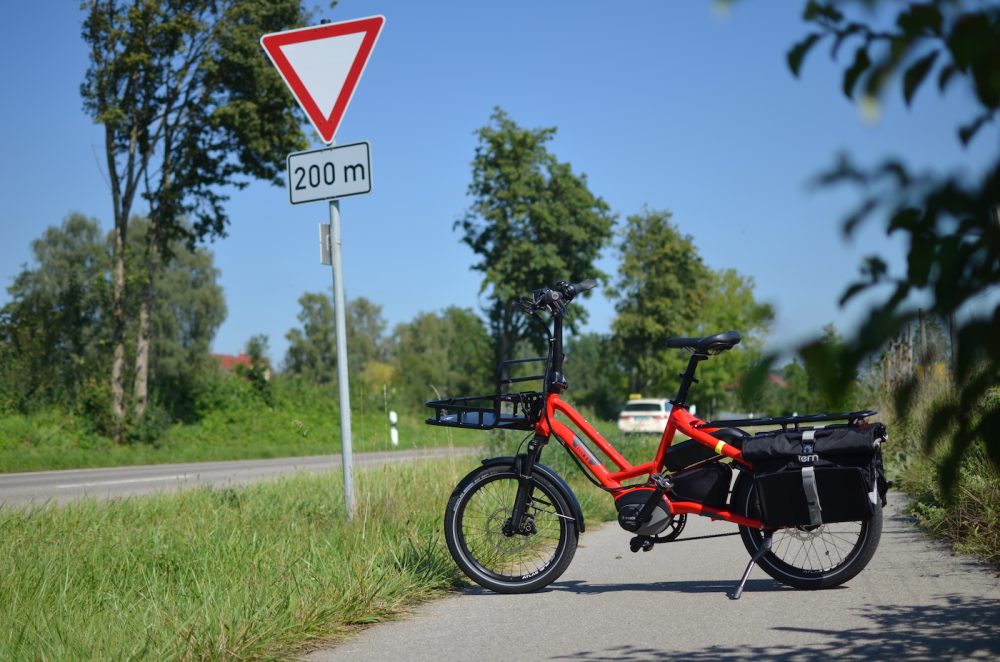 In a word: beautifully.

In more words: The Tern HSD is truly a go-almost-anywhere and do-almost-anything electric bicycle. The Gates belt drive system and the Nexus internally geared hub make pedaling and shifting a breeze – and a silent one at that. The Bosch Active Line motor is powerful without being overbearing, and can even get you up some moderate hills, or larger ones if you drop to low gear and don’t mind going slower.

The bike handles and feels like a full-size e-bike, yet packs down into something small enough to fit in most cars. And the ability to park it up on its tail means it won’t take up much more space than a floor lamp in your apartment.

In other words, the Tern HSD is beautifully designed and works as well as it looks.

As I mentioned, this is the S8i model, which is the mid-level offering. It also comes with a mid-level price, at around $3,699. You can get a chain-driven model with fewer bells and whistles for closer to $3k, and a top-shelf version with automatic Enviolo shifting and other fancy features for nearly $5k. But the Tern HSD S8i feels like the Goldilocks option for me – it’s right in the middle and is just right.

I love those Magura brakes for strong stopping power and maintenance-free braking. The Gates belt drive system is always an advantage for an urban commuter – even if it doesn’t do the MSRP of the bike any favors. And the design of the HSD’s frame and rack is simply a thing of beauty.

On the model I tested, a front rack was mounted to the headset and panniers were installed on the rear rack. But you can affix child seats and a load of other accessories that will help bring out all of the utility features for which the GSD and now the HSD are known. 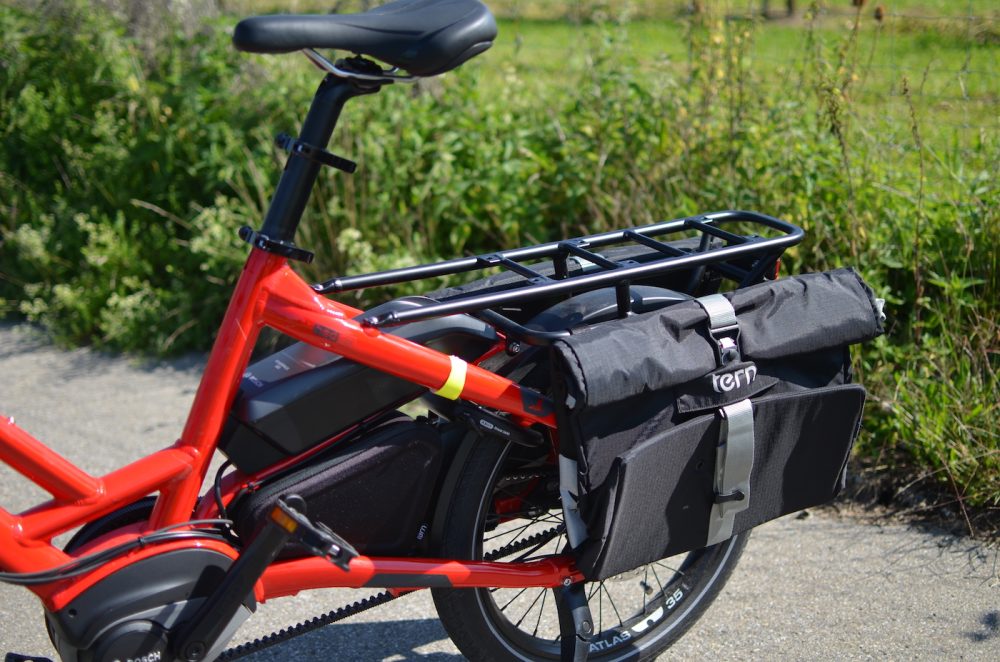 Need to move your apartment? Haul your stuff on an HSD.

Need to pick up a couple kiddos from school? Toss ’em on the back (properly secured, of course!)

There’s just so much to love here on the HSD that I can absolutely see how someone could replace a second car for so many trips around town. In fact, I can see the HSD replacing a first car in certain cases, though I know that won’t be practical for most people. As someone who commutes purely on two wheels though, I’m likely in the small segment of people who actually could get around totally on an HSD.

That being said – I wouldn’t call it perfect. That 400 Wh pack seems like a glaring omission to me. A measly 400 Wh? For a bike with this heavy of a load rating? I would have loved at least 500 Wh. And Tern rates the range as a whopping 42-110 km (26-69 mi), but you’re not going to actually see anywhere near the high end of that window without some serious pedaling action on your part.

It seems to me that Tern nailed the utility aspect of this bike, and so I just wish they had also provided the larger battery that this kind of bike deserves. They did include the 500 Wh PowerPack on the top-end S+ model, but I think it would be just as well at home on the mid-tier model.

Why would someone spend this much on an e-bike?

The only other downside to the Tern HSD compared to other e-bikes is likely the price. At $3,699 for the S8i model, it’s quite expensive compared to the litany of $600 e-bikes out there. But I can confidently say that the HSD is worth the price for anyone who cares about the comfort, convenience, and longevity of their e-bike.

Cheap alternatives and budget electric bicycles have their place, of course. It’s hard for someone who has never ridden an e-bike before to throw down three G’s on an experiment. But after riding a number of budget e-bikes, I can absolutely see and feel the difference. The HSD is built like a finely engineered motor vehicle, while cheap e-bikes are built more like… cheap e-bikes. 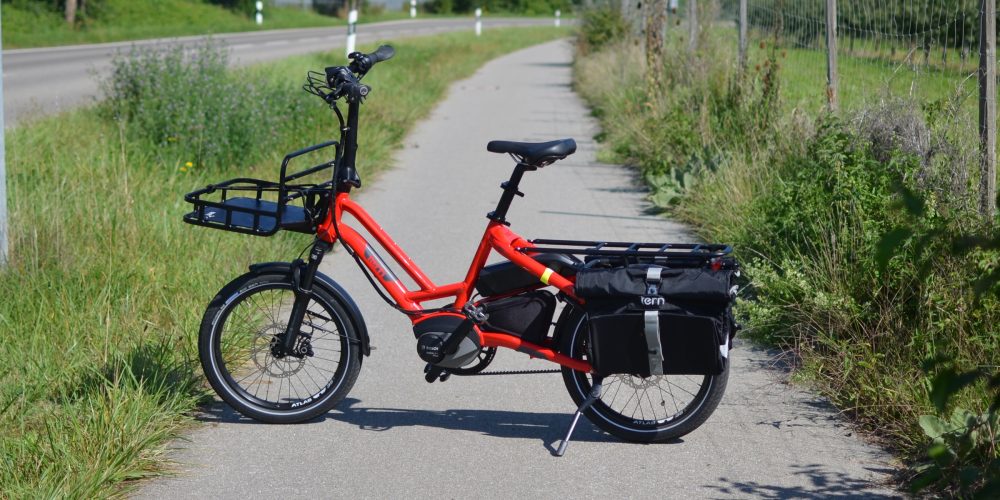 Even small details make a big difference. It’s hard for extremely short or tall people to fit onto budget e-bikes, but the Tern HSD is rated for riders 4’11” to 6’5″ (150-195 cm). They achieve that with their own custom-designed telescoping seat post with dual clamps, plus a quick-adjustable handlebar mechanism – a pair of features you won’t see on any budget e-bikes. And that’s just one of many systems on the e-bike engineered to give a more premium riding experience.

The best way to get this experience is to find a local Tern dealer so you can try an HSD for yourself. Short of that, I can describe the differences as mainly in the feel of the handling and ride as well as the fit, finish, and convenience of the bike. A cheaper e-bike will get you to your destination. But a bike like the Tern HSD will get you there reliably, day after day, and the ride will be so much better thanks to the higher quality components and better engineering of the entire system.

So at the end of the day, I give the Tern HSD high marks. Having only ridden the mid-level HSD S8i and top-end HSD S+, my favorite between the two is the S8i. I haven’t ridden the entry-level HSD P9 yet, but I’m sure the bicycle itself lives up to the high standards that its brothers in the model line have set. It just won’t have the same level of smooth shifting or quiet drive that the belt-driven rear hub provides.

For the kind of person that can afford a more premium e-bike with quality that matches its price (and not just a hefty price tag for the sake of luxury), then the Tern HSD is absolutely the bike for you.

For college students on a budget that are deciding between buying an e-bike or next year’s textbooks, this probably isn’t the ride for you. At least not yet. There are plenty of broke college kid e-bikes out there for now (and I say that having all-too-recently been a broke college kid). Study hard and then you can have an HSD one day too!