Audi currently has more EV platforms than electric cars built on them, here’s why

We’re coming up on the first anniversary of Audi announcing its plans to introduce 20 new EVs in the next four years. The Volkswagen luxury brand yesterday posted a summary of its plans, repeating the goal of making 800,000 EVs a year by 2025 – using, count ‘em, four different EV platforms.

It might seem strange to have more platforms than cars at this stage. But Audi told us about the method to their madness.

The first platform is MLB Evo. To get things rolling with the existing e-tron already on sale – and the e-tron Sportback due later this year – Audi used MLB Evo. It’s based on the VW Group’s widely-used MLB platform, which can underpin gas and diesel vehicles, as well as hybrids and electric powertrains.

Mark Dahncke, an Audi spokesperson, explained in an email today to Electrek:

It’s readily available and could be heavily adapted to deliver the e-tron and the e-tron Sportback.

The key words there were “readily available.” But Audi also wanted a more affordable electric model, which takes the form of the Q4 e-tron. So it is borrowing a different platform, Volkswagen’s MEB, to get economies of scale. Dahncke wrote:

The MEB is for smaller electric vehicles, hence for the Q4 e-tron expected to arrive next year. It does take advantage of the scale delivered through its use in VW electric models. 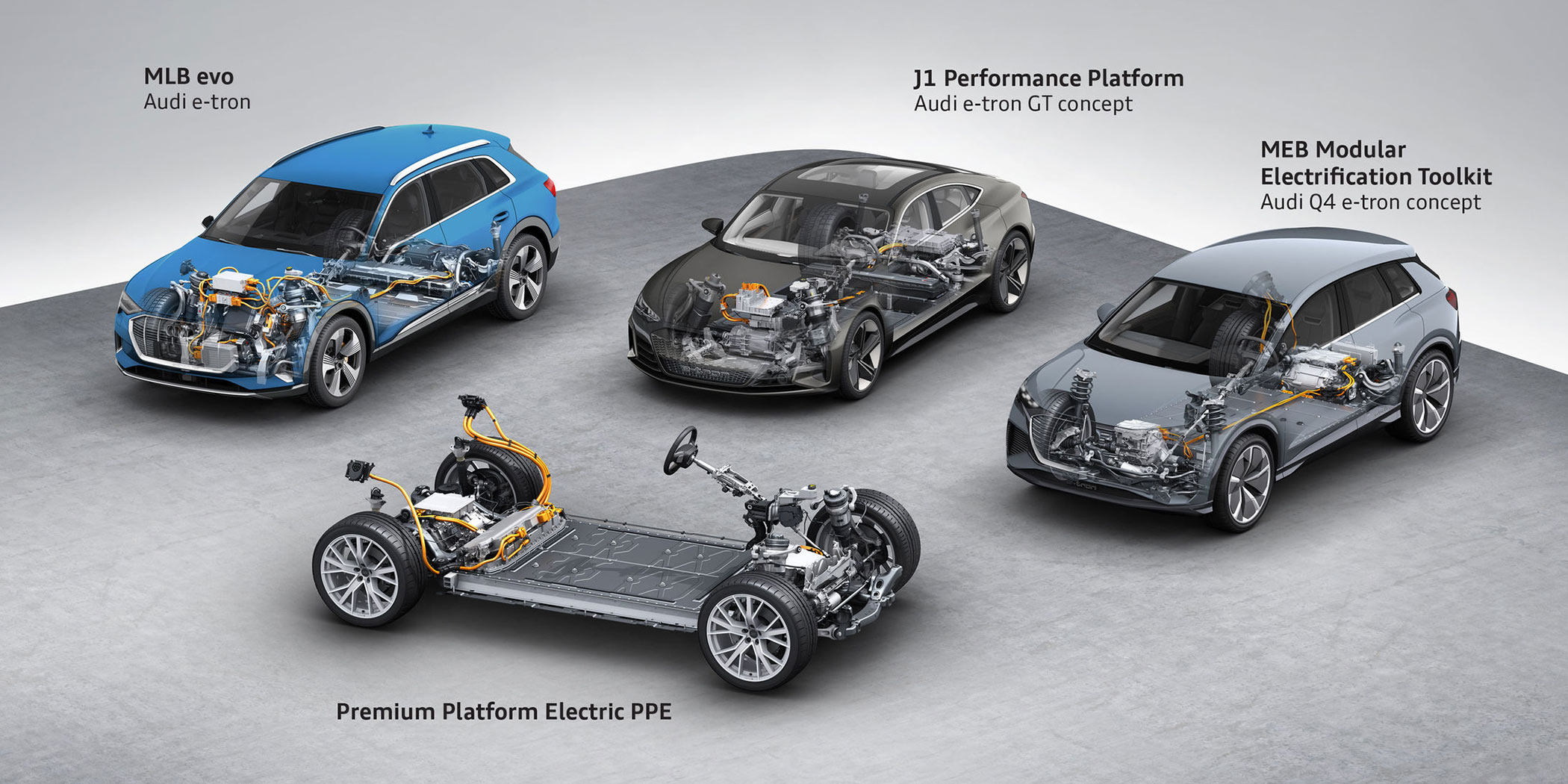 Two more platforms to go. The e-tron GT is expected to arrive in dealerships in early 2021. One of the main goals was to equip the GT with 800-volt ultra-fast charging providing about 200-plus miles of range in a 20-minute highway pit stop. That required the J1 sportscar architecture, shared with Porsche Taycan.

But the J1 is a hand-me-down from Porsche. Basically, the J1 bought time for Audi to develop its own forward-looking, fully capable, ultra-fast charging, EV platform for all its models.

That’s the Premium Platform Electric (PPE), which will also supplant the use of MLB Evo. Audi told me last year that that PPE will become the electric foundation for all of its high-volume vehicle segments.

Audi explained to us today:

The J1 is a sportscar architecture shared with Porsche Taycan. And the PPE will, in essence, be the equivalent to our current MLB Evo architecture only as a fully electric self-standing platform that can scale to accommodate vehicle sizes from A4 to A8, and from Q5 to Q8. In other words, it has been developed to accommodate vehicles and batteries of different lengths and heights, from sedans to SUVs.

Hopefully, that provides some of the rationale for Audi’s current patchwork of platforms.

Now the automaker will set about producing cars using all those electric platforms, ideally in volume.

So far, it’s been slow going, with delays likely due to battery shortages. The pandemic doesn’t help either. Audi halted output at its plants in Belgium, where the e-tron is produced.

It also can’t be easy to launch production and sales of a set of vehicles with three EV platforms – MLB Evo, MEB, and J1 – knowing that they are a transition to the long-term, multipurpose PPE architecture. Presumably, that’s what most of the remaining 20 new Audi EVs will be built on between now and 2025.