Tesla’s new Model Y comes with a built-in heat pump to increase efficiency of the car’s heating system, which should help it maintain consistent range in cold climates, something that many EVs struggle with.

Tesla delivered their first Model Y to a customer today, two days (or several months) ahead of schedule.  Along with this, Tesla finally posted the Model Y Owner’s Manual and training videos to help people prepare for their new cars.

In the Owner’s Manual, we’re finding some new insights about what features come standard on the car.  And one of them, it turns out, is a much-desired feature among cold weather drivers: a heat pump.

In the “climate control operating tips” section, it’s roughly identical to the same passage as in the Model 3, but with this additional entry:

Model Y uses a heat pump to maximize efficiency; therefore, your air conditioning compressor and external fan may run and make noise even when the outside temperature is cold and your vehicle is heating or supercharging.

The practical upshot of this is: less lost range in cold weather.

Every car loses range in the wintertime due to snow tires/snow/rain on the road (higher rolling resistance, more friction) and colder air (more drag). EVs also sometimes lose range because energy needs to be used to heat the battery. This can partially be solved by “preconditioning” your battery, or warming it up before you leave in the morning. Methods to do this can be found in the owner’s manual.

But EVs also lose range because of their resistive heating system. Tesla recommends that if you can get away with it, using the seat heaters is more efficient than using the cabin heater. But when it’s more than just a little cold, people will want the cabin heater to be on anyway.

In cold climates, this can result in significant range loss, well into double-digit percentages.

Most electric car heating systems work through heating coils. Electricity is sent through a resistive heating element, which creates heat that is then blown out of vents to heat the cabin.

This differs from heating in ICE cars because combustion engines produce a lot of waste heat. Heat is usually a waste of energy in cars, because the heat you’re creating isn’t moving the car forward, so you’re not getting anything useful out of it. When you run the heater, some of that waste heat is repurposed to warm up the cabin, which means that running the heater in a gas car doesn’t cost you any extra energy. The air conditioning is a separate system, and does cost energy (and will reduce your gas mileage).

In an electric car, there’s much less waste heat, so this method isn’t as applicable. That’s why resistive heating is used. This means to create heat, energy from the battery needs to be expended — making cabin heating “cost more range” in an EV than it does in a gas car (really, it’s just that the ICE engine is always wasting that energy whether you want to or not, and an EV is only wasting that energy when asked to heat the cabin). 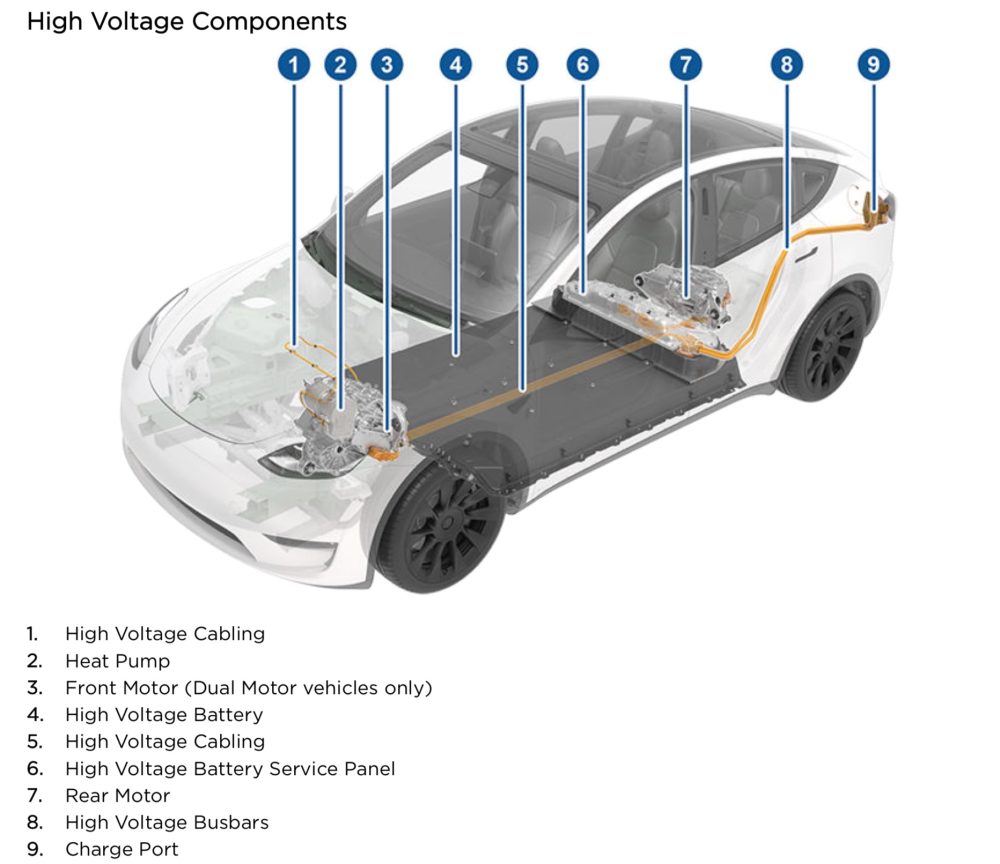 But there’s a better way: a heat pump. This just moves heat from one place to another. And it can do this more cheaply, energy-wise, than resistive heating.

Essentially, the only energy costs here are the cost of pumping fluid from one part of the car to the other. The fluid picks up heat from one place (when flowing through a “heat exchanger”), then leaves that heat in another heat exchanger, where the climate control system blows the heat into the cabin.

This heat usually comes from an air source (like a reverse air conditioner), but it could also use waste heat from the car, perhaps cooling fluid from the warm powertrain. We’re not sure if Tesla is using the latter, though the heat pump is right next to the motor, which can run quite hot. Tesla has used waste motor heat in the past, but not for cabin heating.

So you spend 1 unit of energy and you get ~3 units of heat delivered to the cabin. This isn’t “more than 100% efficient” because that would violate the laws of thermodynamics, but it does better use electricity to move heat around to where you want it, and away from where it’s not useful to you.

Some other electric cars use a heat pump — the Renault Zoe has one, and the Mini Cooper SE does as well, just to name a couple.  But most of them until now — including all other Tesla models so far — use resistive heating.

Tesla models tend to do well in cold climates already, but this will make them even better.

So this is a welcome addition (and one that should add more than one mile to your range in cold conditions), and should be great, especially for the Model Y, which is targeting a “less urban” crowd since it’s a crossover rather than a sedan.

Check out more about the Model Y Owner’s Manual here.