Ford Mustang Mach-E is up to 41k reservations, with some in all 50 states 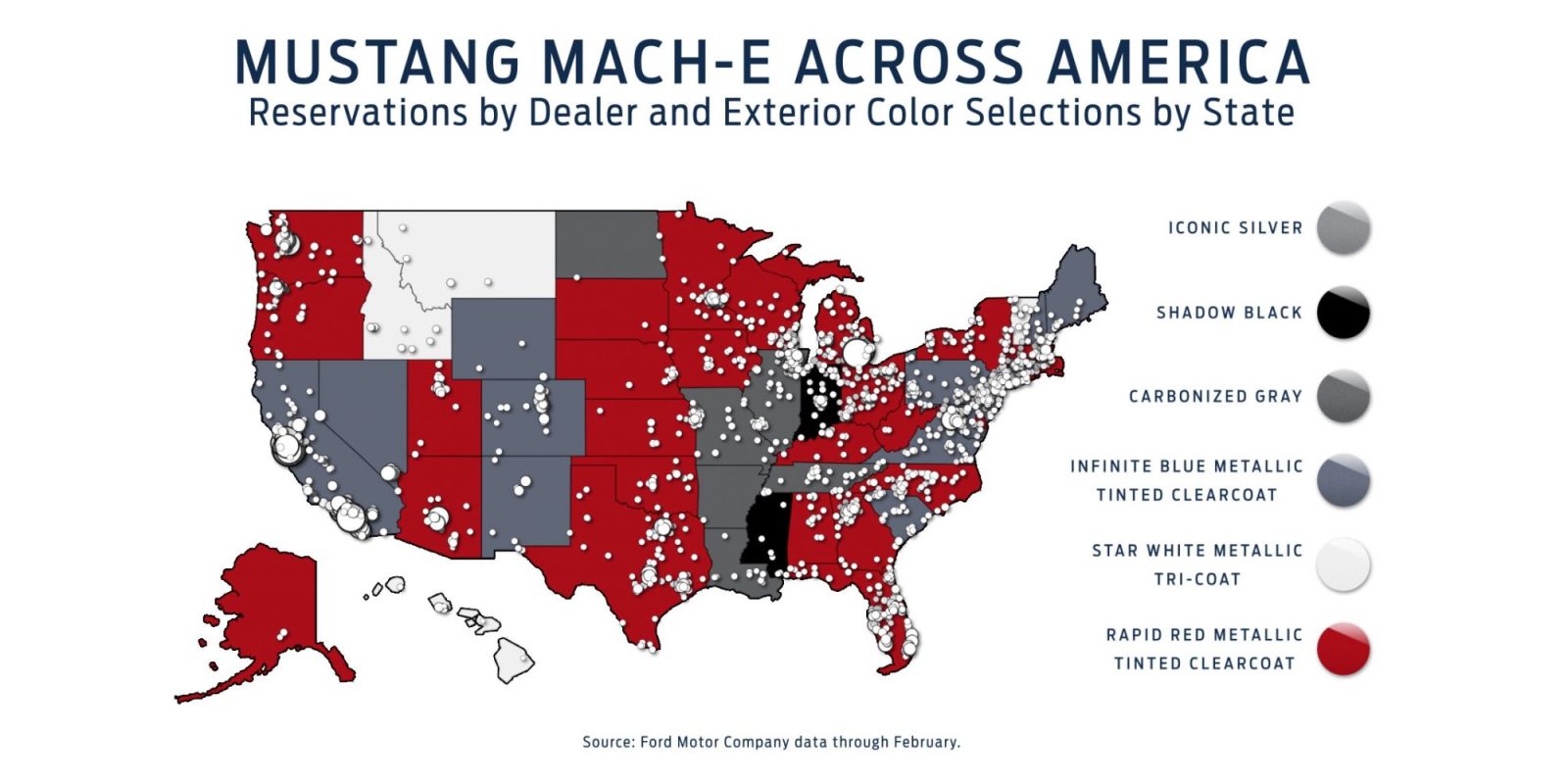 Ford’s Mustang Mach-E reservations are moving along nicely, with the car’s release coming at the end of this year.  We learned today that, if reservation numbers are sequential (and they seem to be), the car now has approximately 41,400 reservations (globally) according to forum posts.

Also, according to Ford, there have been Mach-E reservations in all 50 US states so far.

Ford’s reservation numbers seem to be sequential, though they didn’t start at zero.  The earliest reservers from the day of the reveal have numbers as low as ~4,000.  It seems that the first 4,000 cars will be reserved internally for Ford’s purposes (Ford corporate fleet, employee sales, etc.).  They’re also coming in from around the globe.

Those reservation numbers jumped up to the 20,000 range in the first week after the presentation, and have slowed down since then but are still plugging along.  Two days ago the number was in the 41,000 range, and five days prior to that it was in the 40,000 range.

In the first year, Ford plans to build 50,000 Mach-Es across all trim levels.  But the American company plans to allocate around 60% of those first- cars to Europe.  This is to help Ford meet EU emissions regulations, which are getting much stronger and most automakers are facing big fines if they don’t push more EVs in Europe soon.

Ford also shared an animation showing reservation numbers across the US, along with the most popular color reserved in each state.

The Mach-E looks to be the most popular in the expected places – out West, particularly in California, and in the Detroit area.  It’s also really popular around Washington, DC and in the main cities of Texas.

In particular, there have been questions about whether traditionalists would accept the use of the “Mustang” name on an electric crossover SUV.  The car’s popularity in Detroit, the home of American muscle cars, suggests that a relatively traditional market can still be brought on board despite some big changes.

Ford noted that there are reservations in all 50 states of the US. though it looks like North Dakota only barely eked in there.

Ford credits the broad popularity of the Mach-E to the availability of all-wheel drive and large available range options.

While almost 3/4 of cars across the US were ordered with AWD, that number climbs to 9/10 in cold Northeast states.  And the “extended-range” battery, which is targeting 300 miles of range, has been most popular in spread-out West and Southwest states.

Ford also shared that about 30% of reservations are for the top-performance GT model, which is targeting 0-60 performance of mid-3-seconds.

These numbers are pretty impressive, though pale in comparison to other EVs, even ones announced around the same time.

But for a company without a proven EV track record, releasing their first purpose-built EV, and without first-to-market advantage, I’d say these numbers are still quite good.

We’re pretty excited about the Mach-E at Electrek, and think it offers a good balance between innovation and inspiration.  So it’s good to see it doing well with still almost a year to go until launch.

But one development that might take the wind out of Ford’s sails is that the Tesla Model Y is coming to market much earlier than expected.  We’ve already seen Model Ys shipping from the factory this weekend.

So customers will have the option of a good-looking, well-thought-out, good-performing electric crossover SUV several months before Mach-E hits the market.

The Mach-E will have one big advantage though: tax credits.  Since Tesla ran out of credits and Ford still has plenty, Ford should be able to undercut Tesla on price once incentives are taken into account.  This will help buoy their sales for the first year and beyond – though the popularity of the top-end GT model suggests that early customers aren’t all that price sensitive.