The world’s biggest gains in EV sales this year are expected in Europe. That’s because automakers face hefty fines if they don’t meet fleet-average CO2 emissions that increased in 2020 and continue a steep rise in the coming years. A new report from PA Consulting, a global consulting firm, shows that Europe’s 13 top auto manufacturers will face more than €14.5 billion in fines. Electric-car sales are increasing but not fast enough.

As the International Energy Agency pointed out in November, PA Consulting says that increased adoption of SUVs is undermining gains from EVs. “Emissions increased across the board in 2018, and all manufacturers are now set to miss their 2021 targets,” states the report, entitled “CO2 Emissions Are Increasing, Carmakers Must Act.”

What might surprise some EV advocates is the company identified by PA Consulting as coming closest to meeting 2021 targets: Toyota.

That’s due to Toyota’s big head-start with hybrids. PA Consulting researchers expect sales of convention hybrids and plug-in hybrids to make up more than a whopping 71% of Toyota’s portfolio in Europe by 2021.

“Toyota started early to transfer into hybrids, which helps them to reduce emissions,” wrote Michael Schweikl, automotive expert at PA Consulting, in an email to Electrek.

He indicated that Toyota’s heavy mix of hybrids will be helpful for the next couple of years. But the company lacks the zero-emission vehicles it will need in the mid-term. “2025 remains a challenge for them,” wrote Schweikl.

Take note that Tesla was not included in the study. “No emissions. No fines” said Schweikl. “Tesla is out of the game for regulation,” he said, other than “pooling of their electric-vehicle sales in with other carmakers, such as Fiat-Chrysler.”

Schweikl pointed out that other carmakers are aggressively investing in EVs, but the technology takes years to deploy ­– timetables not fast enough to keep pace with regulations. “Volkswagen owns a very complex portfolio, and it lost time to transfer into BEV or PHEV,” he said.

PA Consulting expects PHEV and BEV to make up around 10% of Volkswagen sales in Europe by 2021. The firm forecasts Volkswagen’s CO2 emissions to drop from 121.1g/km to 109.3g in 2021, missing its 96.6g/km target. Based on these numbers, Volkswagen will have to pay fines of €4.5 billion, the highest of any manufacturer. 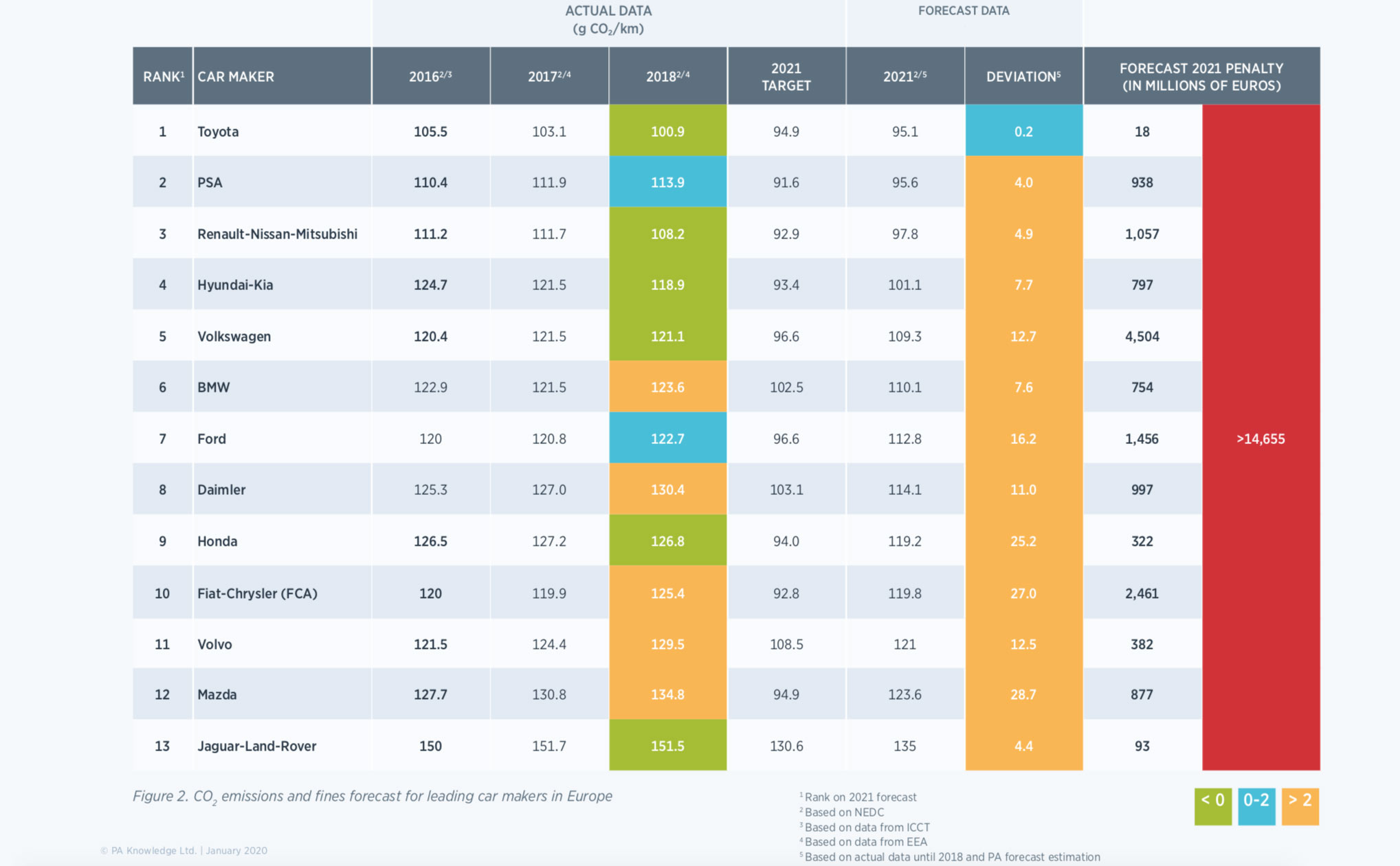 PA Consulting’s analysis shows that manufacturers would need to sell more than 2.5 million extra battery electric vehicles to meet 2021 EU targets. That would require an increase of 1,280% by 2021. The report states:

“Selling so many BEVs in such a short time is practically impossible due to production-capacity constraints.”

What to do? Go faster

The study makes a long list of recommendations of what automakers can do to make up for the shortfall. The tasks include increased R&D, upping the all-electric range of hybrids and PHEVs, greater use of shared EV platforms, and deploying efficient smart-city strategies. Government support of incentives and charging structure is also necessary.

A dominant message in the report is for automakers to speed up the timelines for getting technical solutions to the market.

Daimler this week told Electrek that the German automaker is quadrupling the share of plug-in hybrids and fully electric vehicles in total sales in 2020. That news came after its CEO Ola Källenius admitted, “it will be a challenge” meeting 2020 and 2021 CO2 targets.

However, the report used a cautious estimate that Daimler would increase its percentage of EV and PHEV sales to 14% by 2021. If Daimler moves faster, starting with quadrupling its share of EVs and plug-in hybrids in 2020, the electric take-rate would be closer to 18% by 2021, according to PA Consulting.

That’s still not fast or high enough. Schweikl believes that Daimler would face fines of €430 million in 2021.

PA Consulting pegged Daimler’s European portfolio of EVs and PHEVs at between 2% and 3% in 2019.

PA Consulting’s methodology is based on average fleet weights, the number of registrations of each powertrain, planned releases, super-credits, future trends, and other factors. The 2020 report, released in January 2020, is the fifth year that PA Consulting assessed automakers’ progress towards the targets.

Despite Toyota looking good in the report, Schweikl said, “Hybrids alone are not the answer. The mix is important.” In other words, every vehicle, regardless of powertrain, needs to become more efficient, and automakers need to shift sales to the least polluting cars from those that are heavier and use powerful, less-efficient powertrains.

There’s little doubt from the PA Consulting report about the essential role of EVs and plug-in hybrids in reducing CO2 emission. But Schweikl reiterated that constraints on EV production are problematic in the short term. Even for the mid-term picture, we understand that meeting targets won’t “fully come from BEVs,” as Schweikl points out.

But that only underscores the need for every automaker to intensify its EV efforts immediately. Schweikl said it best:

“The challenge is the volume. Small numbers won’t help.”