The International Energy Agency (IEA) released its annual report yesterday. The Paris-based intergovernmental organization points to electric vehicles as instrumental in curbing global emissions. Unfortunately, those gains are being fundamentally undercut by the dramatic rise in SUVs.

Fatih Birol, executive director of the IEA, stated the case:

There’s good news about emissions and climate change. We read a lot about electric cars in France, where we live, in the Netherlands, Norway, the United States, and China, of course. But ladies and gentlemen, our report shows that the star of the transformation in the automotive industry was not electric cars. It was the SUV.

The IEA expects there will be 330 million electric cars on global roads by 2040, up from its forecast of 300 million EVs just a year ago. That would displace around 4 million barrels-per-day (bpd) of oil use, compared to the 3.3 million bpd previously forecast by the agency.

The IEA’s EV forecast is conservative compared numbers provided by BloombergNEF, which predicts 500 million passenger EVs and 40 million commercial EVs on the road by 2040.

But even with the rise of EV adoption in the next five years, demand in oil will grow by about 1 million barrels per day, on average every year to 2025. This echoes the broader theme of the report. The world is shifting toward renewable energy, but not at the pace to offset worldwide economic expansion and a growing population. 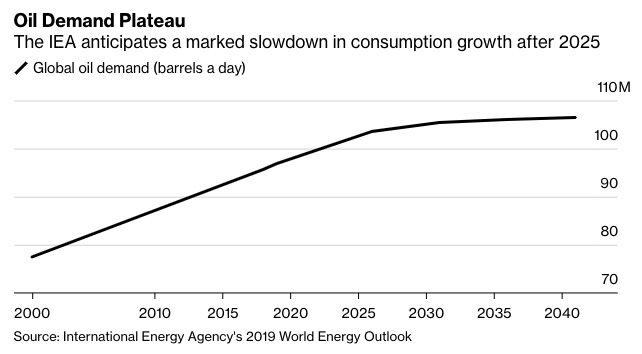 Birol singled out the rise in popularity of SUVs, not only in the United States, but in China, India, Europe, and Africa:

“SUVs, according to our numbers, were the second biggest reason for the global emissions quote in the last 10 years, following the power sector ­– and much more than all the industrial sectors put together. Much higher than the aviation sector.

The takeaway: While EV adoption grows, efforts should also be made to improve the efficiency of today’s vehicles. The IEA report states that the growth of electric cars will displace about 4 million a day, but more fuel-efficient car engines will eliminate 9 million barrels a day of demand. 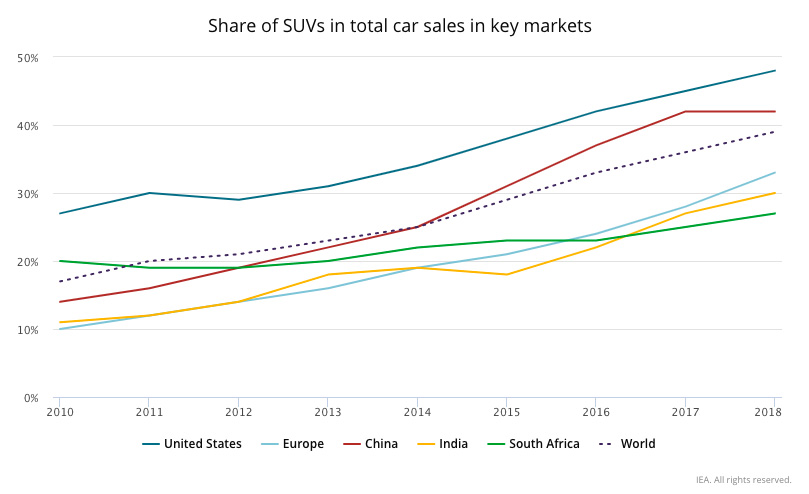 Despite improvements from electrification and fuel-efficient engines, worldwide emissions of carbon dioxide from energy will keep increasing after 2040. That’s due to developing nations continuing to burn coal for power generation, according to the report.

On a more sanguine note, Tim Gould, the report’s co-author, “The future doesn’t look like the past.”

While oil demand outpaced electricity demand in the past 20 years, the trend will shift, according to Gould. “One of the few things you can say with certainty about what will happen over the next couple of decades is that however fast energy demand increases, electricity demand will increase more quickly,” he said.

Gould added, “The engine of all demand growth, passenger transport, is stalling due to improvements in fuel efficiency as well as fuel-switching due to electric cars.”

At the same time, it’s alarming to consider that, in the meantime, consumer preferences for SUVs are undermining these efforts. As EV advocates, we can walk and chew gum at the same time. We can push to accelerate the adoption of electric vehicles while encouraging consumers to buck the SUV trend.

Of course, that could be a tough sell. So if the shift from cars to SUVs stays on course, then the best solution is to fully electrify those sport utilities.