In Europe, sales of pure electric and plug-in hybrid passenger cars are expected to grow 35% in the first nine months of 2020, according to BloombergNEF. That’s a much faster rate than we’ll see in North America or China, the world’s biggest EV markets.

China’s electric-vehicle market could even contract in 2020 as Beijing reduces EV subsidies. To sustain growth in electric-car sales in North America, Tesla will need to spur continued interest in the Model 3, as we wait for the Model Y’s introduction (and the Cybertruck dominates the conversation).

A slew of other EVs will get introduced in the US throughout the year, including new electric models from Audi, Byton, BMW, Ford, Polestar, Rivian, Volkswagen, and Volvo. But it could take most of the year for these vehicles to arrive and for decent sales numbers to build. At the same time, the fight between California and the Trump Administration over fuel-efficiency rules will create uncertainty. 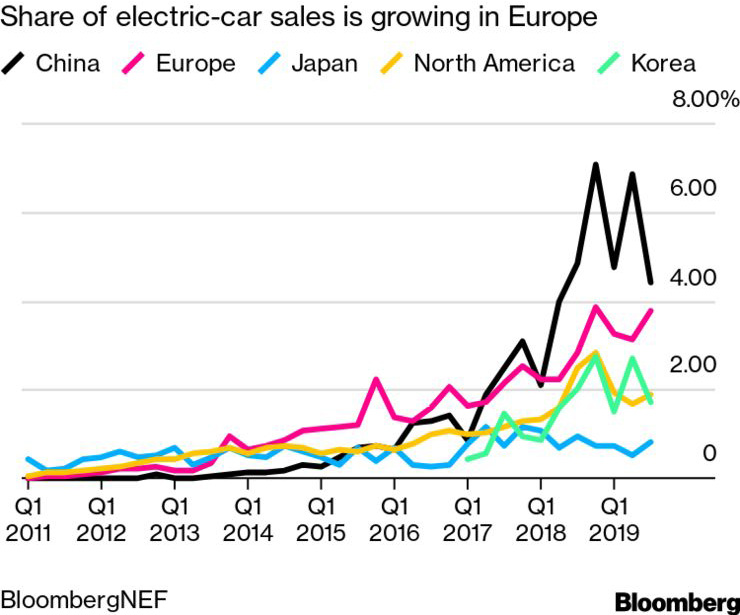 Meanwhile, the European Union is absolutely sure about its fight to reduce carbon emissions. Car manufacturers must sell emissions-free vehicles in volume or pay stiff EU penalties.

New EU rules say manufacturers must achieve a fleet average CO2 emissions representing the equivalent of 57.4 miles per gallon by next year. That steadily increases to 92 miles per gallon average by 2030 – effectively requiring all automakers to immediately begin shifting to electric vehicles or face steep fines. Smaller EVs take precedence over crossovers and trucks.

It’s better to subsidize electric cars than to pay high fines for selling combustion engines. We should see steady gains in the numbers next year.

There will be carrots as well as sticks. Consumer incentives to reduce the price of an EV by as much as 6,000 euros (about $6,500) are offered in Germany, France, and to a lesser extent, the United Kingdom. The biggest sellers of EVs in the US, notably Tesla, will no longer benefit from federal incentives.

As expected, some European auto industry leaders are reluctant to make the change, wanting to stall based on claims of weakening overall sales, potential job losses, and Brexit uncertainty. In the past couple of years, European CO2 emissions have increased as consumers on the other side of the pond shift to profitable, gas-guzzling SUVs. Many forecasts predict a decline in overall vehicle sales in Europe of about 5 to 10%.

EVs and plug-in hybrids accounted for about 1.5% of all passenger cars sold across the EU in 2018. But the electric momentum is already beginning. In Q3 2019, sales of electric vehicles made up 3.1% of new registrations, according to industry data.

In the next three years, the number of available EVs in Europe is expected to reach 150 models.