WEF at Davos: Thunberg calls for end of fossil fuels while Trump promotes them 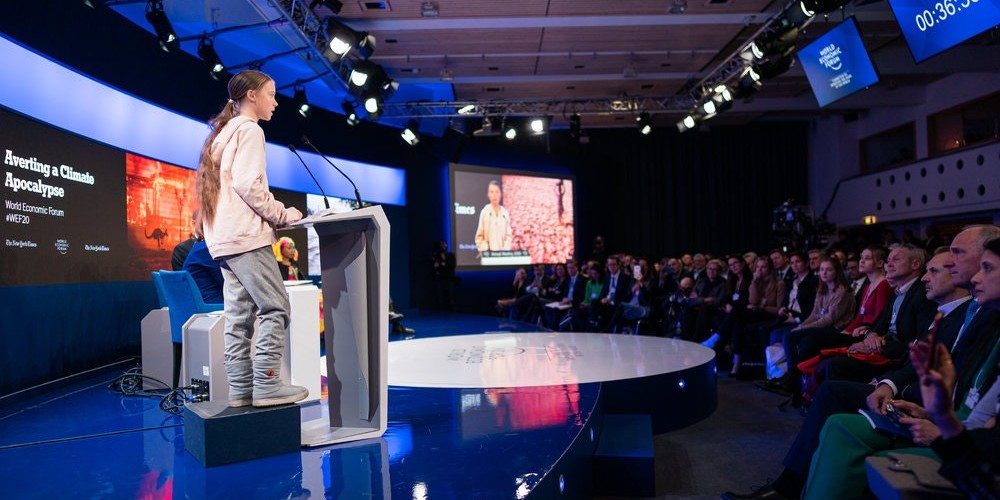 The 50th World Economic Forum (WEF) at Davos launched its annual meeting today with an agenda focused heavily on climate change. This year’s theme is, “Stakeholders for a Cohesive and Sustainable World.”

One of the six key areas that the summit prioritizes this year is “Ecology: How to mobilize business to respond to the risks of climate change and ensure that measures to protect biodiversity reach forest floors and ocean beds.”

Sustainability is not only being discussed but also applied at the event. The WEF reports:

Initiatives put in place to achieve this goal include using locally sourced food suppliers, introducing alternative sources of protein to reduce meat consumption, sourcing 100% renewable electricity, and reducing or eliminating the use of materials that cannot easily be recycled or reused, such as carpets and introducing more electric vehicles.

Climate activist Greta Thunberg opened a panel discussion at the meeting in the Swiss village in which she demanded that all organizations stop investing in fossil fuels immediately. She said:

You say children shouldn’t worry. You say, ‘Just leave this to us. We will fix this. We promise we won’t let you down. Don’t be so pessimistic.’ And then… nothing. Silence. Or something worse than silence: Empty words and promises which give the impression that sufficient action is being taken.

We demand at this year’s World Economic Forum [that] participants from all companies, banks, institutions, and governments immediately halt all investments in fossil fuel exploration and extraction. Immediately end all fossil fuel subsidies and immediately and completely divest from fossil fuels.

From a sustainability perspective, the right, the left, as well as the center have all failed. No political ideology or economic structure has been able to tackle the climate and environmental emergency.

In Donald Trump’s speech at Davos, he dismissed climate activists’ pleas to stop using fossil fuels in order to slow global warming and pollution. He said:

The United States is now by far the No. 1 producer of oil and natural gas anywhere in the world.

We are on the threshold of virtually unlimited reserves of energy including from traditional fuels, LNG, clean coal, next-generation nuclear power, and gas hydrate technologies.

We must reject the perennial prophets of doom and their predictions of the apocalypse. They are the heirs of yesterday’s foolish fortune tellers.

Trump is a supporter and subsidizer of fossil fuels, dislikes wind farms, and pulled the US out of the Paris Agreement. He did, however, announce today that the US would join the 1 trillion trees initiative, launched at the WEF, which is meant to “serve and empower the reforestation community.”

What’s really important is what real and concrete actions come out of Davos when it comes to the reduction of the use of fossil fuels and greenhouse gases.

The WEF’s sustainably run summit is a good example and a nice gesture, but the powerful delegates need to emulate the WEF’s actions immediately, the way that Microsoft has.

It’s a bit baffling that the WEF’s theme is a sustainable world, yet they invited Trump to deliver the keynote speech. It’s telling, yet not at all surprising, that Trump didn’t even mention any green energy sources whatsoever in his list of “unlimited reserves of energy.” And it beggars belief that he still insists coal is clean when the evidence is overwhelming that it’s anything but.

Just 100 companies are responsible for 71% of global emissions, and outdoor particulate pollution kills around 4.2 million people worldwide annually. The International Energy Agency yesterday warned that Big Oil emissions inaction is not an option.

So while the 1 trillion trees initiative is important, it’s not enough. The world’s governments, banks, companies, and institutions must continue to circumvent the climate denier in the White House with positive, definitive action.