On Wednesday, Indonesia’s Jakarta Post reported that two small islands in South Sumatra have become submerged by rising seas, and four other islands nearby are on the brink of vanishing. The Indonesian Forum for the Environment (Walhi) says this is due to climate change.

Betet Island and Gundul Island are now 1 meter (3 feet) and 3 meters (10 feet) below sea level, respectively. Betet is part of Berbak-Sembilang National Park. Both islands are uninhabited by people. 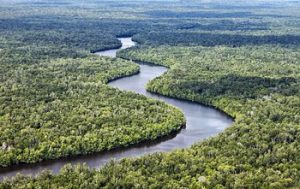 Unesco declared Berbak-Sembilang National Park (pictured above and left) a world biosphere reserve in 2018. It is home to mangroves and diverse flora and fauna, including the Sumatran tiger and kingfishers.

Rising seas are a great threat to Indonesia, where millions of people currently live in low-lying coastal areas across around 17,000 islands.

South Sumatra — and Indonesia as a whole — uses a lot of fossil fuels. However, Indonesia is the largest producer of biofuels in the world and is scaling up for green energy. Further:

Although South Sumatra has 1.2 million hectares of peatland ─ which functions as a natural carbon sink and absorbs CO2 from the atmosphere ─ amounting to some 15% of land area, development activities, land conversion, and forest fires have caused the peatlands to dry up and become damaged.

On Thursday, Microsoft announced that by 2030 it “will be carbon negative, and by 2050 Microsoft will remove from the environment all the carbon the company has emitted either directly or by electrical consumption since it was founded in 1975.”

Microsoft is to be commended for their 2030 target, and hopefully, more companies and organizations will follow suit. Carbon negative is what is needed to reverse CO2 emissions.

They are also launching “an initiative to use Microsoft technology to help our suppliers and customers around the world reduce their own carbon footprints and a new $1 billion climate innovation fund to accelerate the global development of carbon reduction, capture, and removal technologies.”

The tech giant will shift to a 100% supply of renewable energy by 2025 and electrify its global campus operations vehicle fleet by 2030. Further, it will pursue International Living Future Institute Zero Carbon certification and LEED Platinum certification for our Silicon Valley Campus and Puget Sound Campus Modernization projects.

Thanks to the efforts of Australian firefighters, a grove of ancient Wollemi Pines, or “dinosaur trees,” were saved from the bushfires. The trees were thought to be extinct until the grove was discovered in 1996.

Fossil records show that the pines existed as far back as 200 million years ago — and since these 200 trees are the only known Wollemi Pines left in the wild, their location has remained a closely kept secret in order to ensure their protection.

Firefighters sprayed the trees with fire retardant and installed an irrigation system. Air tankers also dumped water around the grove to keep the flames away. Luckily for the planet, it worked. Have a look at AFP’s video below:

World Economic Forum president Borge Brende told CNBC that he was confident Donald Trump would be questioned in Davos next week about his climate-change stance.

The theme of this year’s World Economic Forum at Davos, which is from January 21 to 24, is, “Stakeholders for a Cohesive and Sustainable World.”

First on the list is: “How to address the urgent climate and environmental challenges that are harming our ecology and economy.”

Trump will be attending Davos on Tuesday, January 21, next week. Brende said:

On climate change, that will be a topic that will be raised with [Trump] I am sure when he is in Davos… We like frank conversations to move the world forward.

We have to make it more expensive to emit and we have to see new technologies being introduced.

If you’re not familiar with Davos, here’s a good explainer from Euronews on what it is, and what to expect this year. Bottom line: The NGOs and youth want action from the decision-makers to reverse the climate crisis. Now.

What do the Australian bushfires have to do with floods in Africa? The answer is in the Indian Ocean. Vox explains the science here in this video.

Actor Jenifer Lewis took a two-and-a-half-week trip to Antarctica recently and was alarmed by the melting she saw. She then made a video about man-made climate change and pollution:

When she returned, she conducted an interview with TMZ Live on Tuesday where she reiterated her message. Have a watch below:

The BBC has introduced a series of new initiatives to address the climate crisis for 2020.

The Beeb has launched Climate Check, a monthly video feature from BBC Weather that looks at how the climate crisis is affecting temperatures and weather.

Adam Bullimore, head of BBC Weather, says it will be a chance to “share something more with audiences than just the typical weather forecast”, and will focus on the impact of data like CO2 emissions and Arctic sea ice measurements on our planet.

Further, the Our Planet Matters project will feature a regular variety of news services and shows that address the climate crisis. This includes an hourlong documentary by Sir David Attenborough called Extinction: The Facts, which will “examine the fragile state of the natural world.”

There will also be a weekly Climate Change podcast from the BBC World Service that will include scientific, business, and policy perspectives.

BBC plans most ambitious year of climate change coverage as it steps up commitment to Our Planet Matters.

Yesterday, a federal appeals court threw out Juliana v. United States, a climate-change lawsuit filed in 2015 by 21 young people, during the Obama administration. Our Children’s Trust represented the plaintiffs. 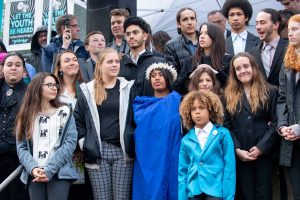 Their complaint asserted that “through the government’s affirmative actions that cause climate change, it has violated the youngest generation’s constitutional rights to life, liberty, and property, as well as failed to protect essential public trust resources.”

Two members in the three-judge panel ruled that the issues the case brought up did not belong in the courts, thus agreeing with the Trump administration’s argument. The appeals court decision reverses an earlier ruling by district court judge Ann Aiken.

Judge Andrew D. Hurwitz, who ruled to throw out the lawsuit, said:

Reluctantly, we conclude that such relief is beyond our constitutional power. Rather, the plaintiffs’ impressive case for redress must be presented to the political branches of government.

Where is there hope in today’s decision? Plaintiffs’ claims are based on science, specifically, an impending point of no return. If plaintiffs’ fears, backed by the governments’ own studies, prove true, history will not judge us kindly. When the seas envelop our coastal cities, fires and droughts haunt our interiors, and storms ravage everything between, those remaining will ask: Why did so many do so little?

I would hold that plaintiffs have standing to challenge the government’s conduct, have articulated claims under the Constitution, and have presented sufficient evidence to press those claims at trial. I would therefore affirm the district court.

With respect, I dissent.