BMW will close its main Munich plant this summer for six weeks. That will allow the company to retool and modify more than one-thousand robots to get ready for production of the all-electric BMW i4 in 2021.

Competing legacy automakers, notably Volkswagen, are establishing dedicated vehicle platforms and assembly lines exclusive for electric vehicles. However, BMW will produce combustion, EV, and plug-in hybrid cars on the same flexible line – like the one in Munich.

“Munich is a pioneer in integrating electric vehicles into production,” Frank Wienstroth, a company spokesperson, told Automobilwoche. The company wants to be able to gauge consumer demand for EVs and other powertrains, and then quickly respond with increased production as it deems necessary.

The BMW i4 is based on the next-gen 4-Series Gran Coupe, which uses a sleek and sporty sedan body style. BMW claims that the electric sedan will achieve a range of 600 km (373 miles) from its 80-kWh battery (using the generous WLTP cycle). That could yield as many as 300 miles on a single charge using EPA numbers. Zero-to-60-mph performance is 4 seconds flat.

Klaus Froehlich, BMW’s R&D boss, this month said that deployment of EVs in world markets would largely depend on emissions rules. So, according to Froehlich, electric vehicles will be relatively popular in large east coast cities in China, while plug-in hybrids will be the preferred solution in Europe. In the United States, EV adoption will be focused mostly on the west coast. “Most of the US does not need BEVs,” said Froelich.

The iX3 will be built at the BMW Brilliance Automotive plant in Shenyang, China. And the iNext, which will feature Level 3 levels of autonomy, will be made at BMW’s Dingolfing plant, about 75 miles east of Munich.

Dingolfing is the company’s largest vehicle-production site in Europe. It’s also where EV components are made. Electric motors for both the i4 and iNext are made at Dingolfing.

That said, the BMW i4 looks like a very compelling EV that offers style, range, and performance. The big question is if the company will produce enough of them – and back them with enough sales and marketing resources – to get a real reflection of consumer demand.

You can’t help but wonder if BMW is fully taking stock of sales numbers for its vaunted 3-Series versus the Tesla Model 3, as shown in this graph: 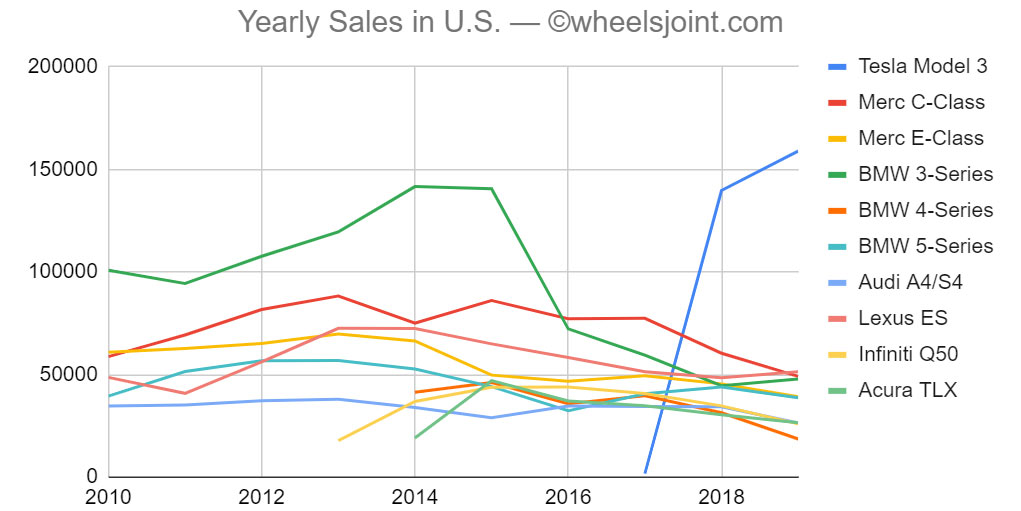