Is a NIU electric motorcycle coming? These spy shots might imply so

NIU is well known for its high tech electric scooters, which took off in China before receiving high acclaim upon their export to Europe. But recent spy shots received exclusively by Electrek show that the electric scooter manufacturer might have its eyes on something bigger – in the form of a NIU electric motorcycle.

Is this an upcoming NIU electric motorcycle?

The spy shots in question show an electric motorcycle covered in camouflage. It appears to be sporting a chunky electric motor and has a pair of GoPro-style action cameras mounted to the body panels to monitor the rear of the bike.

The photos were taken by an Electrek reader in Changzhou, China who spotted the curious electric motorcycle on his way to work.

You know what else is in Changzhou, China? NIU’s factory.

And it’s an area where NIU has been known to conduct road testing of its new vehicles in the past.

But as I started looking deeper at the images, the clues began adding up.

Check out the rider’s pants. There’s printing on the back that appears to read ” NIU POWER – FROM THE HEART”. 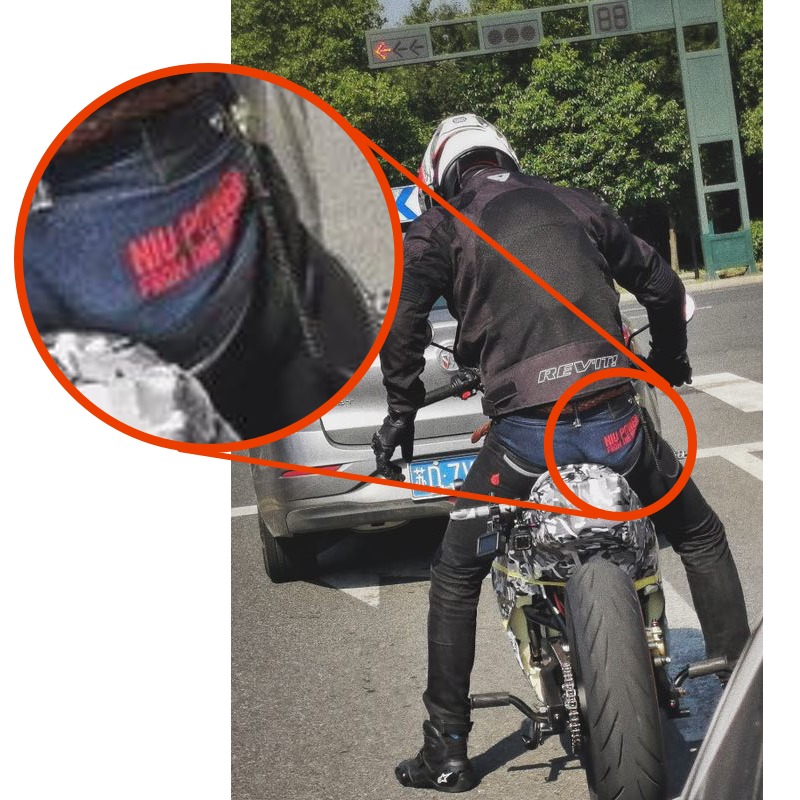 While I’ve never heard of that phrase in the West before, a bit of research revealed it to be part of NIU’s domestic corporate language.

They use the phrase locally in China and you can even see clothing in their online store with the phrase printed on it.

Now, I’ve never toured the NIU factory (at least not yet, but I’d sure love to – if anyone from NIU is reading this – wink wink). But I have toured other electric motorbike factories in China. And it’s not uncommon for employees to wear a company uniform.

Searching through images found online of NIU’s factory, it appears there are some color-coded uniforms, with perhaps orange being electronics and grey being assembly. In every test ride photo I can find, riders appear to wear dark-colored pants. No pictures are close enough to see if the NIU phrasing is on the pants, but it adds a bit more circumstantial evidence.

Next, I tried to compare anything I can find on the bike to existing NIU products.

This was made difficult by the fact that 1) the rear end of a motorcycle is fairly different from scooters, and 2) the pictures, unfortunately, don’t show much of the controls or display interface. But what we can see is the left handlebar controls. Compared to a NIU NGT, they look pretty darn similar. 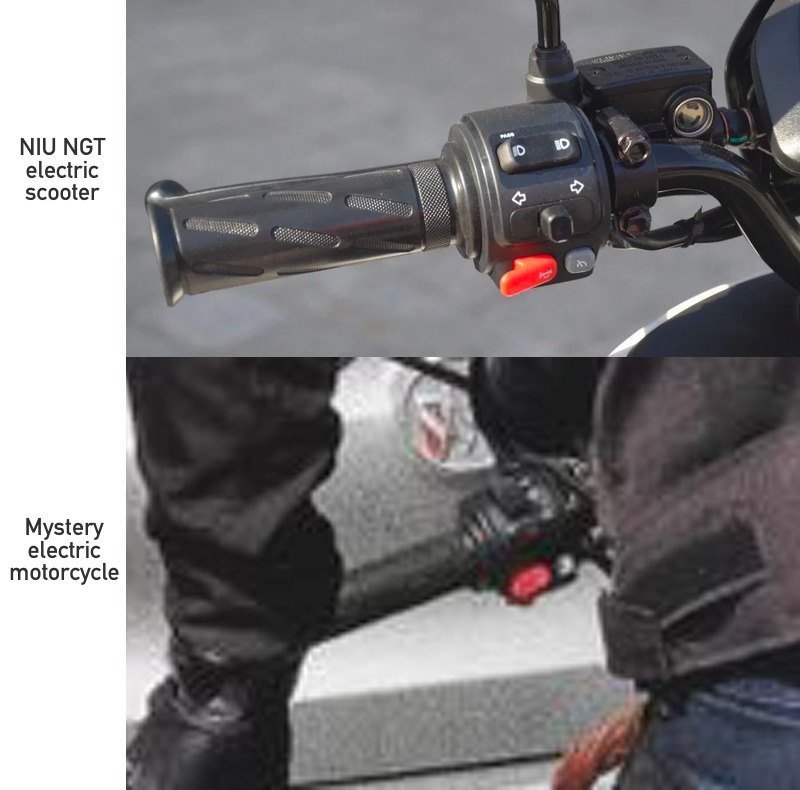 Of course, many motorcycles have similar button setups, but the only difference appears to be a vertical light selector switch instead of a horizontal switch. Again, more circumstantial evidence, but no smoking gun.

And while we’re comparing components, the motorcycle shares the same round mirrors as NIU’s scooters. But again, such mirrors are common and can’t prove anything by themselves.

So it appears that what we have here is a new electric motorcycle prototype being tested in NIU’s backyard by a rider wearing NIU swag and with parts that resemble some existing NIU components.

What does NIU say about it?

To try and get to the bottom of this, I reached out to every NIU contact I have. And one by one, each declined to speak to me about the bike on the record. Which shouldn’t surprise anyone.

Keep in mind that NIU is a publicly-traded company now, listed on the NASDAQ after last year’s IPO. And as such, information such as new product announcements is legally required to go through official channels. So if this was a NIU electric motorcycle prototype, no one at the company would be able to tell me. And if it wasn’t, then well, technically they’d be free to tell me it wasn’t.

Or they could string me along in the hopes that I’d write an article and build a bunch of NIU hype.

In my opinion, this is a NIU electric motorcycle prototype. The company has already explored a number of new product categories, expanding from their standard scooters into both smaller urban scooters and even bicycles. Leveraging their electric powertrain technology to head the opposite direction, up the vehicle weight class, only makes sense.

Plus, we’ve got the 2019 EICMA Milan Motorcycle Show coming up in about two weeks – an event where NIU had an impressive showing last year. This is the biggest trade show of the year for two-wheelers and is typically the event that companies choose to unveil their latest models. If NIU was working on an electric motorcycle, this would be the show to debut it at.

What about you guys? Do you think this is a NIU electric motorcycle? Let us know in the comments below!