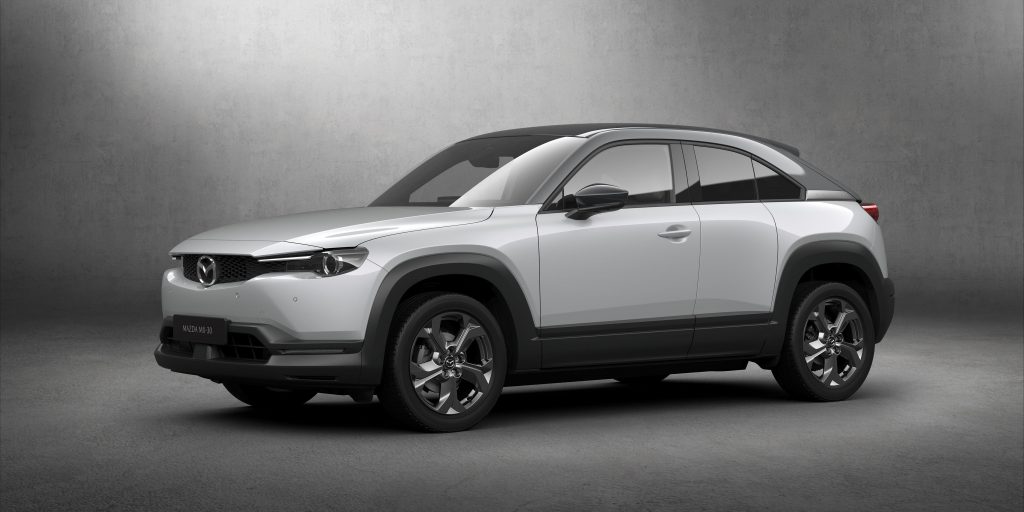 Earlier this week, we saw the first photo of the car, and most of its specs were known already.  The only things left were pricing and availability, and more photos of the car from other angles.

The first photo we saw of the MX-30’s body design made it look rather boxy, particularly compared to the test mule based on a CX body.  However, now that more photos are available, it does look rather sleek.  The nose is still a bit stubby, but the rest of the car maintains a smoother “EV aesthetic,” particularly the swooping D-pillar.

One of the most distinctive design features of the MX-30 are its suicide doors, reminiscent of the old RX-8.  In this case, Mazda is calling them “freestyle doors.”  Mazda states that these doors improve the openness of the car’s interior space and aid in ingress and egress, including loading and unloading cargo like strollers or wheelchairs. 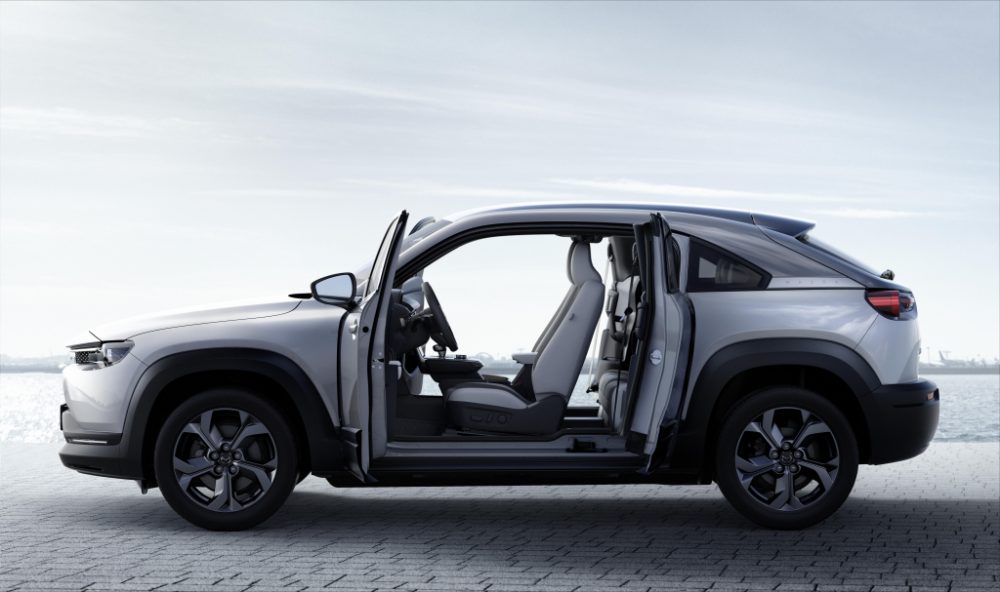 Interior design includes several recycled and sustainable materials.  The console and door grips use cork, and the seats are made of a fabric partially derived from recycled plastic bottles. 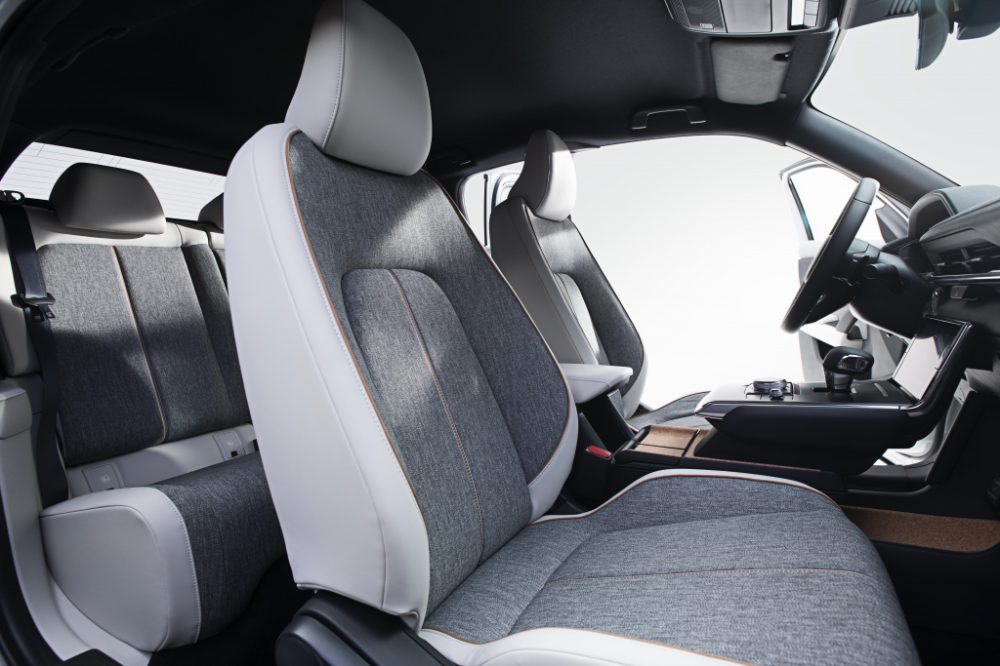 The MX-30 will be available with Mazda’s i-Activsense active safety features including blind spot and lane keep assist.  Mazda has not announced availability of any driver assist features like Tesla’s Autopilot or Nissan’s ProPILOT.

Mazda announced that pre-orders are open in Europe, and that European delivery will start next year.  Availability in other markets will be decided at a later date.

The car is expected to be available for under £30,000 in the UK, inclusive of VAT and government grants, and to have a base price of €33,990 in Germany.

We’ve been excited about Mazda’s first EV here, and ready to welcome them to the EV family.  Unfortunately, our first reactions to this car is that the specs seem a little bit anemic.  Not tremendously anemic, mind you, but definitely a bit behind the times.

There certainly should be EVs available with smaller battery capacities, as not everyone needs or wants 300 miles of range.  If a car can be made at a lower price with fewer batteries, and if people can still get everywhere they plan to go with that car, then there is certainly a market for that.  Lots of families have a car in their house which only ever gets driven around town or on shorter trips.  This is why there are different battery sizes available in Teslas, in Nissan Leafs, and so on.

But the main issue here isn’t that a 120-some-mile-range car exists, it’s that it doesn’t seem to be much cheaper than the competition.  If a Leaf can go further and costs less money, Mazda will have a hard time selling customers who cross-shop the two.  The MX-30 has more of a “small SUV” aesthetic, which will work in its favor for some customers, but it’s not going to be appreciably different in size than the Leaf.  So, on paper, they have their work cut out for them.

There are a couple other cars coming out soon with similar issues of offering lower specs than less expensive competing vehicles, namely the Honda E and Mini Cooper SE.  Both of these are subcompacts and thus don’t really compete with the MX-30, but they both will have similar 35-ish kWh packs, just-over-100-mile ranges, and over-30k starting prices.  All three of these cars will face similar issues and will have to rely on their “fun” branding to overcome cross-shoppers who might be less impressed by their specs.

Of course, one very important aspect is the drive experience.  We haven’t gotten to drive the car yet, so maybe when we do we’ll think better of the MX-30.

One worrying note is that Mazda has eschewed the “one-pedal driving” style popular among EV drivers, in favor of reduced regenerative braking and a more traditional two-pedal experience where drivers need to use the brake pedal for most of their deceleration needs.  We’ll have to see if that negatively affects the drive experience when we eventually get some time behind the wheel.

So we’re happy to see Mazda unveiling their first EV, and we do hope they try their best to sell a lot of them.  But hopefully later models – like the ones they’re working on with Toyota – will have a more robust feature set when compared to their contemporary rivals.

What do you think about the MX-30?  Let us know in the comments below.  And here’s a gallery of photos of the car, for all the angles you’d like to see: