Need for speed? Check out the 40 MPH Mantis electric scooter from fluidfreeride

Have you ever thought to yourself, “I like riding electric scooters, but I wish they could go 40 mph (64 km/h) and get a range of 55 miles (88 km) per charge”? Well then you’re in luck, because fluidfreeride has unveiled its newest model available in the US, the Mantis electric scooter.

[Update: We’ve since reviewed the Mantis scooter – check it out here!]

We’ve seen Miami-based fluidfreeride around these parts before.

They are best known as the exclusive US distributor of the popular dual motor WideWheel electric scooter, which we had fun reviewing last year. They also offer a number of other fun and fast commuter scooters, which we’ve also put a few miles on.

But their latest unveiling, the fluidfreeride Mantis electric scooter, has specs that make those other awesome scooters pale in comparison.

The Mantis electric scooter is available in two models, the Base version and the Pro version. 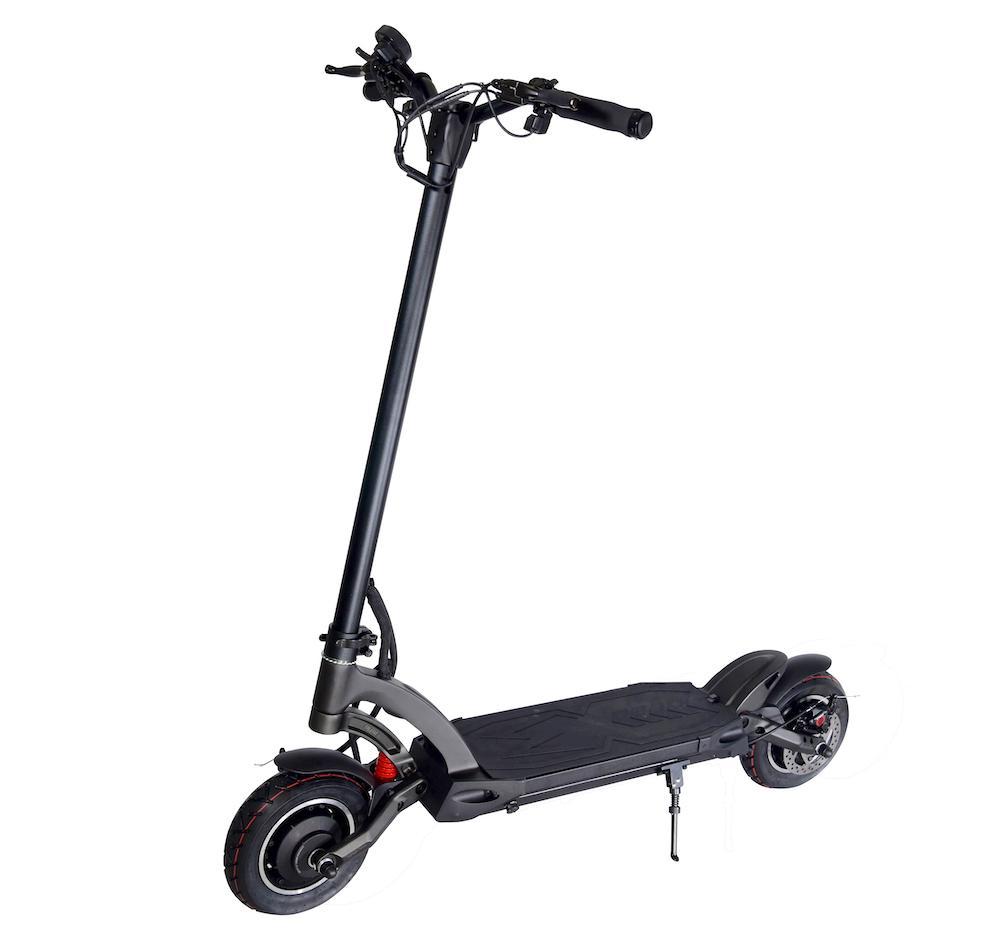 The main difference between the Base and Pro versions of the Mantis electric scooter is the battery. The Base version has a 17.5 Ah battery pack with around 1 kWh of capacity. That’s sufficient for around 40 miles (64 km) of range in Eco mode.

Of course with a big battery comes a longer charging time. Expect it to take between 8-12 hours to charge from 0-100% on the stock charger. That’s a full overnight charge, though most people won’t be running the battery down to 0% very often.

Also, keep in mind that Eco mode uses only single motor drive and has a top speed of around 30 mph (48 km/h). If you switch into dual motor mode and increase the speed, expect the range to drop a bit from the advertised 40 and 55 mile (64 and 88 km) specs.

The Pro version, on the other hand, has full hydraulic disc brakes with the brake fluid reservoir and hydraulic fluid running all the way up to the brake levers. That offers the strongest brake performance and essentially zero maintenance.

The Base version is priced at $1,499 while the Pro version is quite a bit steeper at $2,099. Both of those are the sale prices, which are marked down $200 and $300 from the MSRP, respectively. Shipping is expected to begin mid-next month.

While that isn’t pocket change, consider that we’re talking Boosted Rev price range, yet with full suspension and better range, not to mention the higher speed.

We’ve tried our hand at other fast 40 mph (64 km/h) electric scooters before, such as the Turbowheel Lightning from eWheels. And as awesome as we found the Turbowheel Lightning to be, it was quite hefty at 77 lb (35 kg). The Base and Pro versions of the fluidfreeride Mantis electric scooter weigh in at 61 and 65 lb (27.7 and 29.4 kg), or around 20% lighter. Still not lightweight by any means, but perhaps the difference for many people between being able to lift it into a trunk or onto the bus.

We’ll be getting our hands on a Mantis electric scooter next week for a full review, so make sure you check back for that! [edit: here’s the review!]

Alright, let’s address the elephant in the room first. A 40 mph (64 km/h) electric scooter can absolutely be dangerous.

Of course, so can a 15 mph (25 km/h) electric scooter, as injury studies have shown. But upping the speed to these levels comes with much higher risks. So you have to know that going in, and you have to accept that risk.

But based on the rate that these types of vehicles are selling at both in the US and around the world, it seems like people are lining up in droves to accept that risk.

And you know what? I get it. Having ridden fast electric scooters, I can say for sure that they are a thrill. They are fun, exciting, and get your blood pumping. So while some people chase thrills by bungee jumping, sky diving, or anything else, I find fast electric scooters to be much more convenient ways of getting my rush. Plus, they come with the added benefit of actually being useful.

I’m probably never going to sky dive to work, but I can ride a scooter to work any time I want.

And just because these scooters can reach such high speeds doesn’t mean they need to be ridden at these speeds. A Hyundai Kona has a top speed of 104 mph (167 km/h), but obviously you’re not going to use that very often. It’s there because extra speed and power can be useful on occasion to get out of a sticky situation.

And it’s the same with fast scooters. Even though my Turbowheel Lightning can do 40 mph, I rarely exceed the low 30s. But the power helps me get up to speed quickly and I know the speed is there if I need it. And I of course wear proper safety gear, including a Dainese mesh jacket with built-in back, shoulder, and elbow protectors, for example. I ALWAYS wear a helmet, though I should really wear my AGV full face modular motorcycle helmet more. I admit that I do end up wearing just my skate helmet often, which doesn’t protect the face like a full helmet does.

All of that is to say: I’m definitely excited to put some miles on the new fluidfreeride Mantis electric scooter to report back on how it rides. And for those of you that are happy sticking to the 20-ish mph range, there are still a lot of great (and more affordable!) scooter options for you, too.