Electric scooters have exploded in popularity over the last year or so. You can see them everywhere from college campuses to boardwalks and city streets. But while cute little 250 W and 15 mph (25 km/h) electric scooters are the norm, there are much, much more powerful options lurking in the shadows.

And when it comes to high power, you need not look any further than the Turbowheel Lightning electric scooter. At 40 mph (64 km/h), this electric scooter is a beast. And having survived the last two weeks on it, I’m here to share my story.

The Turbowheel Lightning is definitely NOT your average Lime or Bird scooter. It positively eats those other scooters for breakfast.

Not only is it in a totally different speed and power class, but this scooter has better suspension than my first car. Plus it has a battery that can probably last for weeks, depending on your commute.

And before you go saying this thing is too dangerous for its own good, hear me out. Yes, you can get into a lot of trouble on a scooter like this, but it also opens up a lot of possibilities too.

More on that in a moment. First, let’s check out its tech specs below to get a sense of what this scooter is packing. 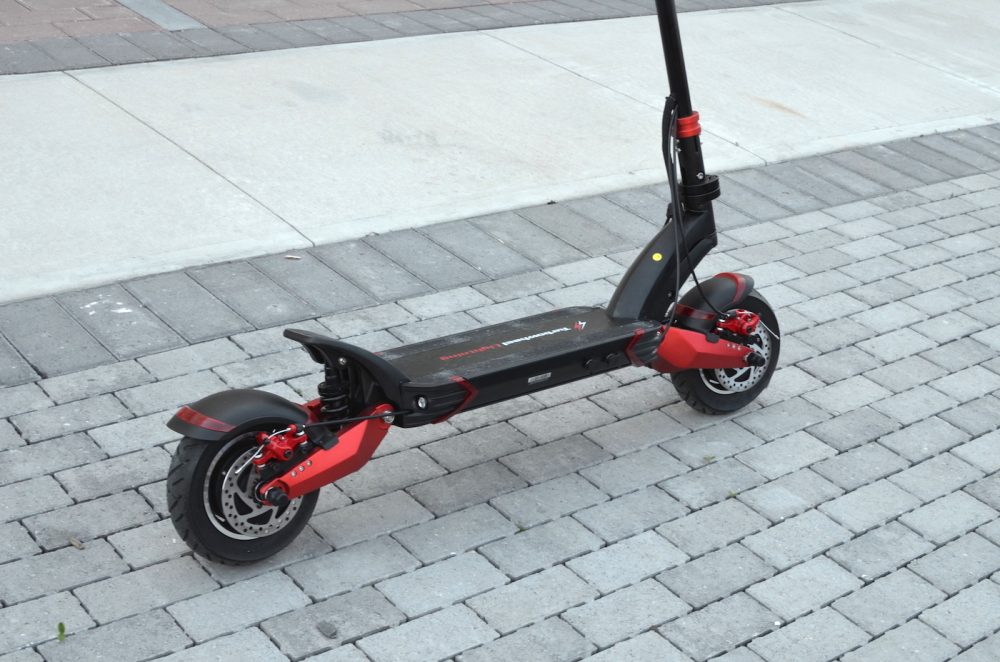 Alright, so we’ve gotten the crazy part out of the way. It’s essentially a 40 mph, 3.6 kW adrenaline rush on wheels.

But what’s the point of a scooter this powerful?

Whether you want a scooter for recreational off-road riding or to use as a legit on-road commuter, the Turbowheel Lightning is designed to handle it. 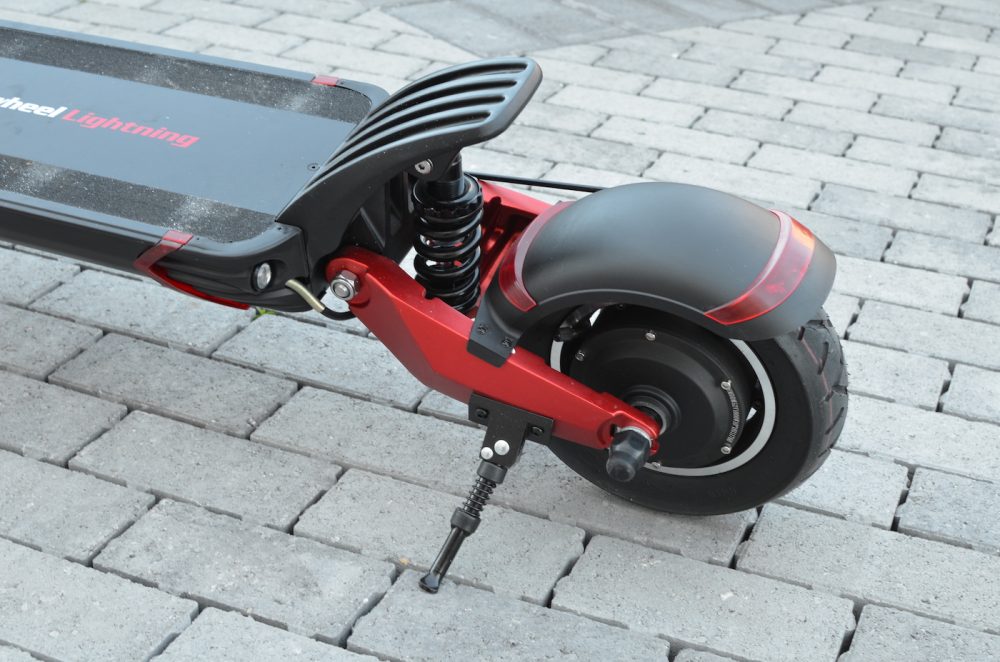 How well does it work?

It works really well – perhaps too well. The power of the two motors is potent and can even be overwhelming at first. But within a few minutes of riding, you’ll learn to smooth out your throttle application. Again, this isn’t a Lime scooter where you just give wide open throttle. This is a powerful motor vehicle that requires a gentle touch.

Fortunately, the Turbowheel Lightning offers a number of power limiting features that can help you dial in the appropriate power for the situation. You can engage just one motor to cut the power in half or engage an Eco Mode to reduce the low-end power. There are also 3 speed modes that are selectable using the color LED display. Mode 1 gets you up to around 22 mph (35 km/h), Mode 2 bumps it up to 30 mph (48 km/h), and Mode 3 is unlimited. Presumably, that gets you up to 40 mph (64 km/h) on flat ground.

I say “presumably” because I have to be honest here: I never found its max speed. It is super thrilling at high speeds, but I never got it past 37 mph (60 km/h) before self-preservation kicked in and I got a bad case of the Nopes. To be clear, it felt perfectly stable and was an awesome adrenaline rush at those speeds. But there’s just something about going 40 mph while standing that makes me question my life decisions.

So most of the time I rode the scooter in the 30-35 mph (48-56 km/h) range. But based on the fact that it was still accelerating by the time that I would chicken out, I can tell there’s still more speed there.

Even at 35 mph (56 km/h), the scooter is plenty fast for commuting. I mostly ride in the road, but also occasionally ride in the bike lane. In the bike lane, I am always respectful to do it only when I’m not around other cyclists, and I always keep it in under 20 mph (32 km/h). But most of the time I simply ride in the road, where the Turbowheel Lightning’s speed and power mean I can keep up with traffic easily. In fact, I have to be careful not to tailgate other cars – an experience I don’t normally have on electric kick-scooters.

A benefit of the high speed is that it also comes with high power. And while you don’t necessarily have to take advantage of the crazy top speed, you’ll definitely enjoy the torque and power. I can take shortcuts up dirt embankments that no other scooter I own can climb. And when I take off from rest, full power has me hanging on tight so I don’t fly off the back of the scooter –  another reason not to go wide open throttle too often. But if you ever need the power to squirt ahead of an aggressive driver or out of the way of a smartphone-distracted merger, the Turbowheel Lightning will take care of you. 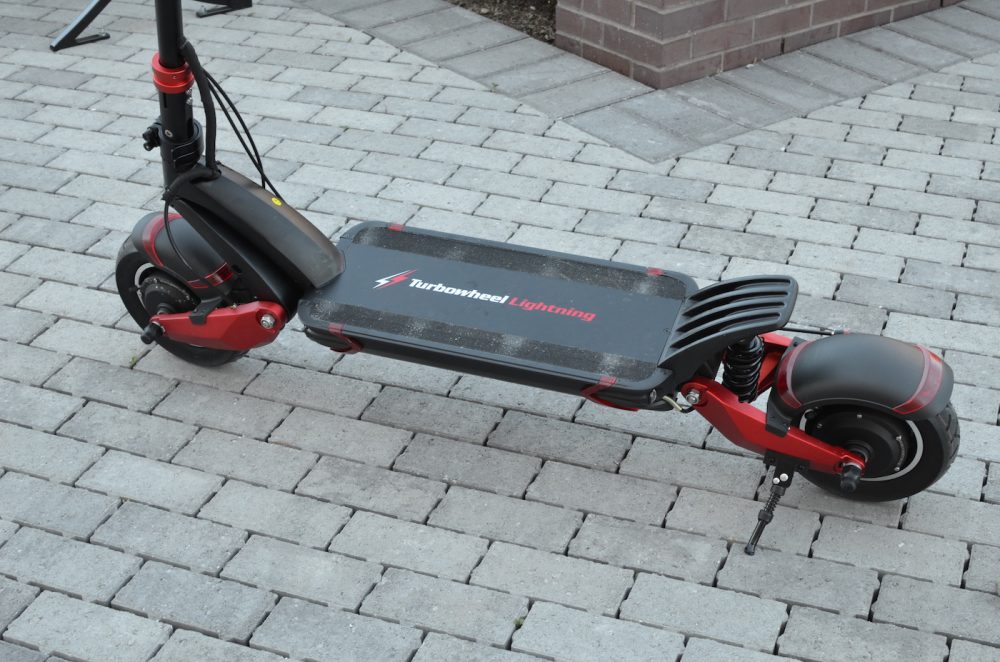 I’m also impressed by the build quality, and for $1,690 I had hoped it would be good. When I heard about such a high speed and high powered scooter, I was a little bit worried that they would have just stuffed higher power motors into a smaller scooter frame. Fortunately, the Turbowheel Lightning has an entirely different design than the other somewhat lower power Turbowheel scooters we’ve reviewed. We previously tested the Turbowheel Dart, which tops out at around 25 mph (40 km/h). It was a great scooter, but it was meant for 25 mph – not 40 mph. And to reach these higher speeds, the new Turbowheel Lightning is completely redesigned.

The Lightning is purpose-built for such high power and speed levels. The front and rear swing arm suspension have long travel and easily absorb bumps in the road as well the occasional 8-inch (20 cm) drop. Ask me how I know…

The downside of such high powered motors and long-range batteries is that the scooter is heavy. 77 lb (35 kg) heavy. The stem folds (and features dual heavy duty locking mechanisms) but even so, you’re basically deadlifting the scooter off the ground. That’s fine for picking it up to put it in a car. Maybe you can do one flight of stairs that way. But I’m not sure I’d want to carry this up to an upper-level apartment. So if you don’t have an elevator in your building, maybe think again. 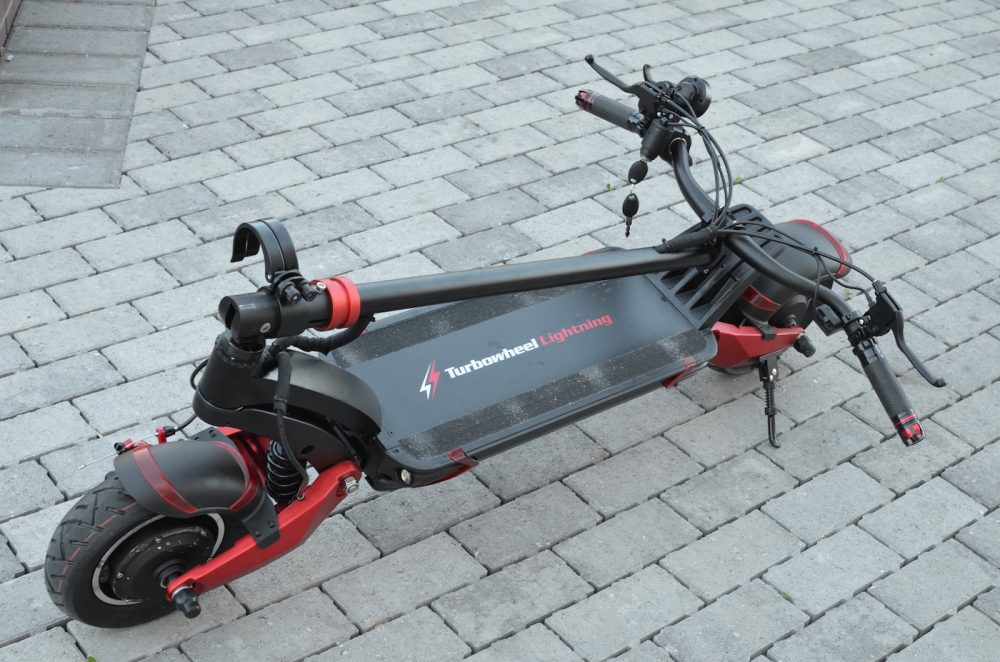 But for most of us, you probably won’t be folding or lifting the scooter much, so the weight might not be too much of a worry. And when it comes to handling, the heavier weight is actually a benefit. It makes the ride feel more solid and stable – two important factors for a high-speed scooter like this.

Other features like the included high visibility lights help make the Turbowheel Lightning a great commuter scooter. And with dual charge ports, you can charge it twice as fast as other scooters by plugging in a second charger. Of course, with nearly 1 kWh of battery, you won’t have to charge the scooter that often. 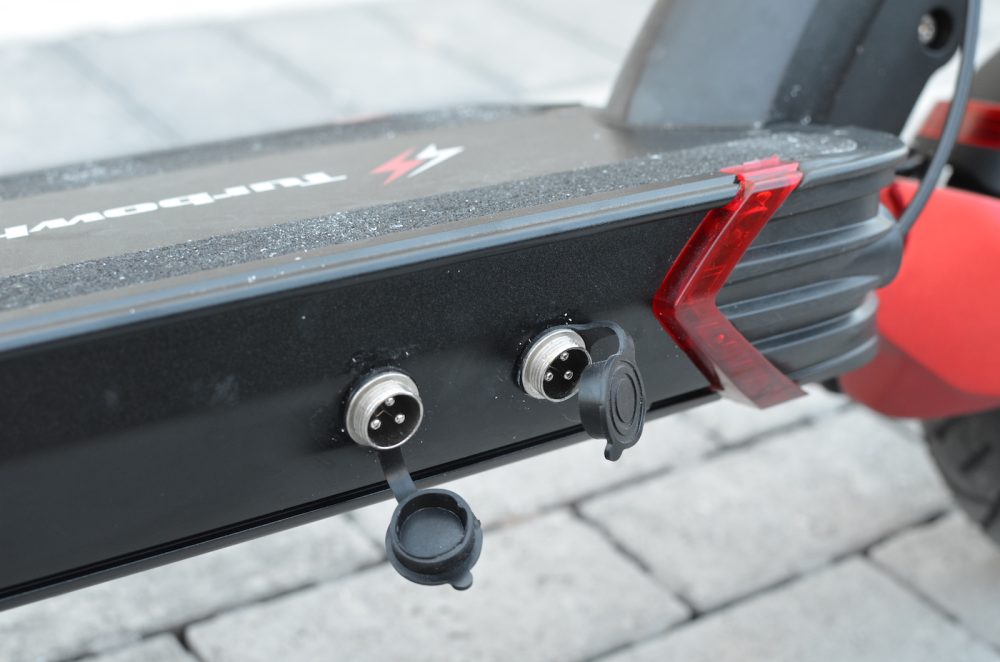 Why would anyone need this?

I know, I know. The comment section is going to be full of people telling me that this is crazy and you take your life in your own hands with a 40 mph scooter. And to a certain extent, they are correct. But don’t we take our life in our own hands any time we get into a car or straddle a bicycle? A scooter is just another way to get around, and for many, it is a much more exhilarating way.

And just because the scooter goes 40 mph, that doesn’t mean you always need to ride it at top speed. Many minivans can hit 100 mph, but we don’t call them reckless vehicles. The ability to hit higher speeds is a safety feature that can be used at the right moments or kept in your back pocket for the right time. The dual 1.8 kW motors of the Turbowheel Lightning are good for more than just high speed, they also offer high power that keeps you safer on the road.

That being said, a scooter like the Turbowheel Lightning requires a responsible rider. This isn’t a scooter for hooligans and it’s not for use at high speed in bike lanes either. Even when I pass cyclists on the open road, I slow down and give a wide berth. And when I do ride in bike lanes, I slow down to normal e-bike levels.

But these kinds of high speed, high power scooters definitely have their place, whether it’s for recreation or utility. They are hilariously fun to ride and a blast off-road. And they make my commute both fun and fast – much better than a car.

I always make sure to suit up when I ride these types of fast scooters though. It’s still cool enough in New England to wear my thrift store leather motorcycle jacket, and I wouldn’t ride a scooter like this in open-toed shoes. When the summer comes around, I’ll likely wear my mesh motorcycle jacket. And I always, ALWAYS wear a helmet. In fact, I wouldn’t consider it odd to wear a full face helmet on a scooter like this.

And of course, you’ll need to check your local laws to ensure this type of scooter is legal in your area. Such laws vary around the country so it’s impossible to maintain an up-to-date list for every city. That one is on you to check. 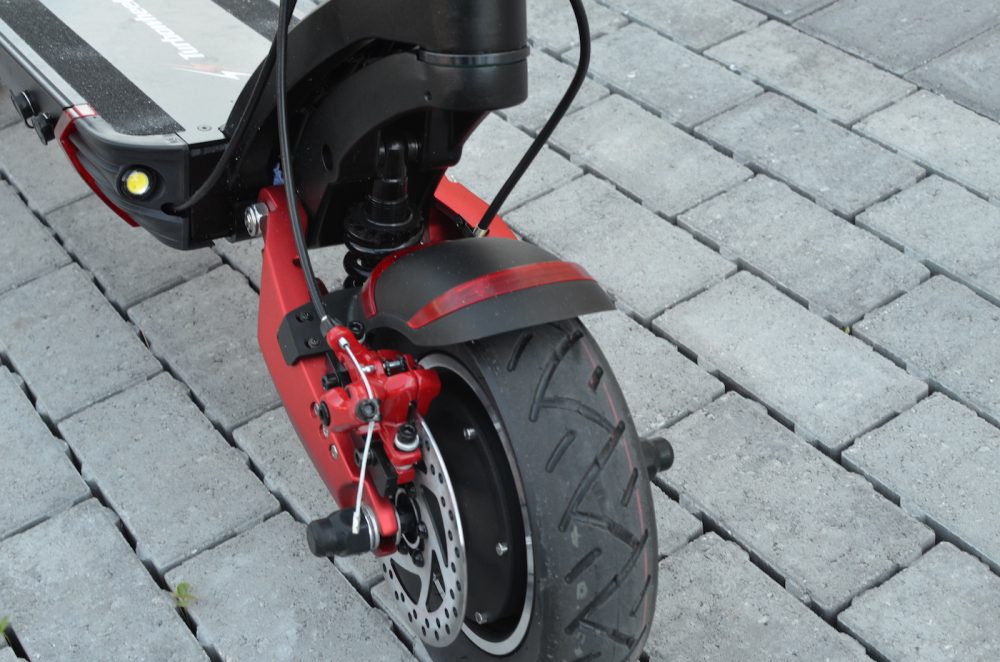 So, will there be haters out there telling us that fast scooters shouldn’t exist?

But we’ll just blow right past them and enjoy the exhilarating feeling of scooting off into the sunset.