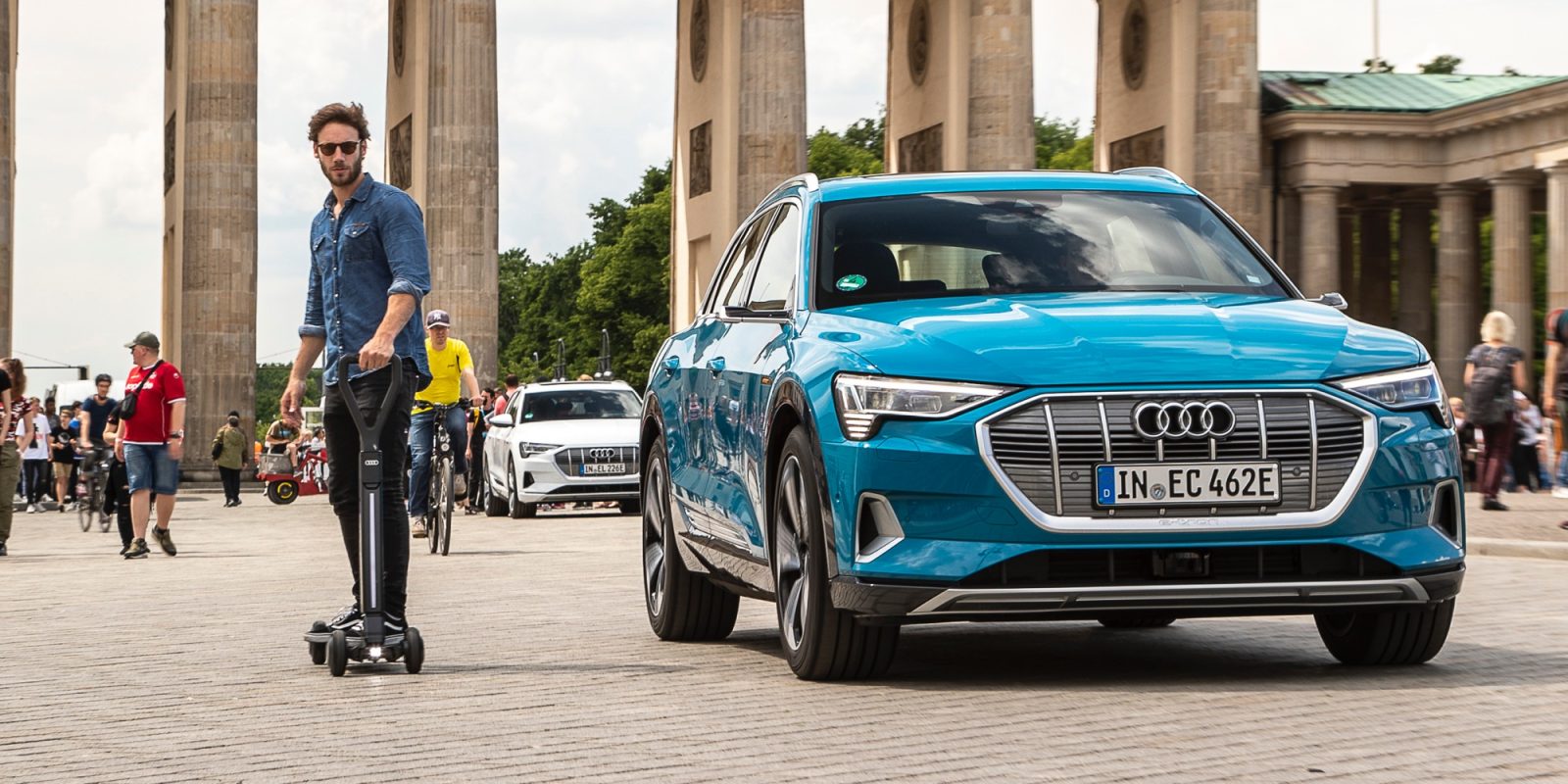 Audi has a new electric micro-mobility offering known as the e-tron Scooter. Half skateboard, half scooter, this new last-mile vehicle from Audi is all-electric.

As more major automakers jump on the electric micro-mobility bandwagon, not even the premium brands want to be left out.

As of today, Audi appears to be the latest car manufacturer to toss its hat in the ring.

The company’s new e-tron Scooter is anything but ordinary, however.

While companies like BMW have opted for simple, lightweight electric scooters, Audi is going in a new direction.

The handle is designed to be ridden with just a single hand while the rider stands sideways. The wheels are more similar to conventional skateboard trucks, providing four points of contact and lean-to-turn steering.

The Audi e-tron Scooter, combining the advantages of the electric scooter and the skateboard, is designed for sporty riders. To be transported by car, bus, or train, the 12-kg (26-pound) e-scooter can be folded up and conveniently stored in the back of the car, or if preferred, pulled like a trolley. Above all, the Audi e-tron Scooter stands out, thanks to its handling, which is like surfing waves. The rider has one hand free, and so is able to look around and give hand signals.

As sporty as Audi calls it, the e-tron Scooter still won’t travel over 20 km/h (12.5 mph), which could put a hamper on anyone hoping to set a new land speed record.

Production is expected for next year, and Audi anticipates that the price could cost a whopping €2,000 (US $2,225). That would be well above the price of nearly any other electric scooter or skateboard on the market.

Other car manufacturers have played it safer, such as Seat, who purchased a standard electric scooter sharing service in order to enter the micro-mobility market.

This one is kind of baffling. But I guess most new forms of transportation seem odd at first glance, especially in the micro-mobility space.

There’s a chance the Audi e-tron Scooter could actually be a fun ride, though. The biggest reason people don’t feel stable on electric skateboards is because they aren’t used to holding on with only their feet and balance. Adding a handle to an electric skateboard could solve that problem.

The purest in the electric scooter and skateboard worlds are surely to scoff at the new Audi e-tron Scooter, but I’d give it a fair shake if I could try it.

At over $2k though, I’d definitely be borrowing instead of buying!