Next step? The Bonneville salt flats!

His custom electric motorcycle streamliner is built largely from salvaged parts. And believe it or not, it looks like he just might succeed. He has experience as a mechanical engineer for battery systems as well as dozens of successful electric motorcycle builds under his belt already. So while his Lark electric streamliner motorcycle project might seem far fetched, he may just be uniquely qualified to do it. 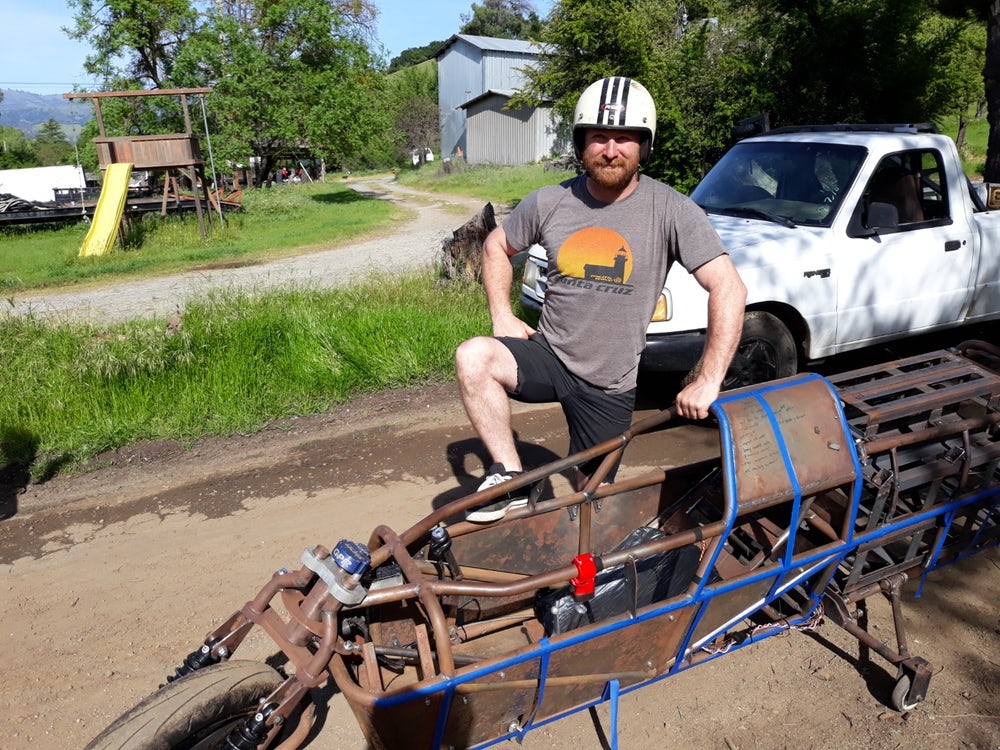 His latest testing on the Lark electric streamliner motorcycle has proven the bike’s stability, though it was pretty touch and go during testing.

He didn’t have access to a test track designed for such specialized testing, so he had to make do with local country roads and some semi (or completely) illegal testing. His friends helped temporarily block off the road while Shea tested out the electric motorcycle.

These types of streamliner motorcycles are highly unstable at low speed, meaning it was difficult to even get it out of the driveway, let alone down the road. Maneuvering around at 30 km/h (18 mph) is a feat of its own.

Ultimately, Shea kept upping the speed while keeping the stabilizer wheels down. All told, the motorcycle is outfitted with 22 kWh of battery and a 200 kW (268 hp) motor. The batteries are massive and heavy LiFePO4 cells — not the type you’d put in a purpose-built racing streamliner if you had any other option. But Shea didn’t have any other option, and so that’s what he’s got. 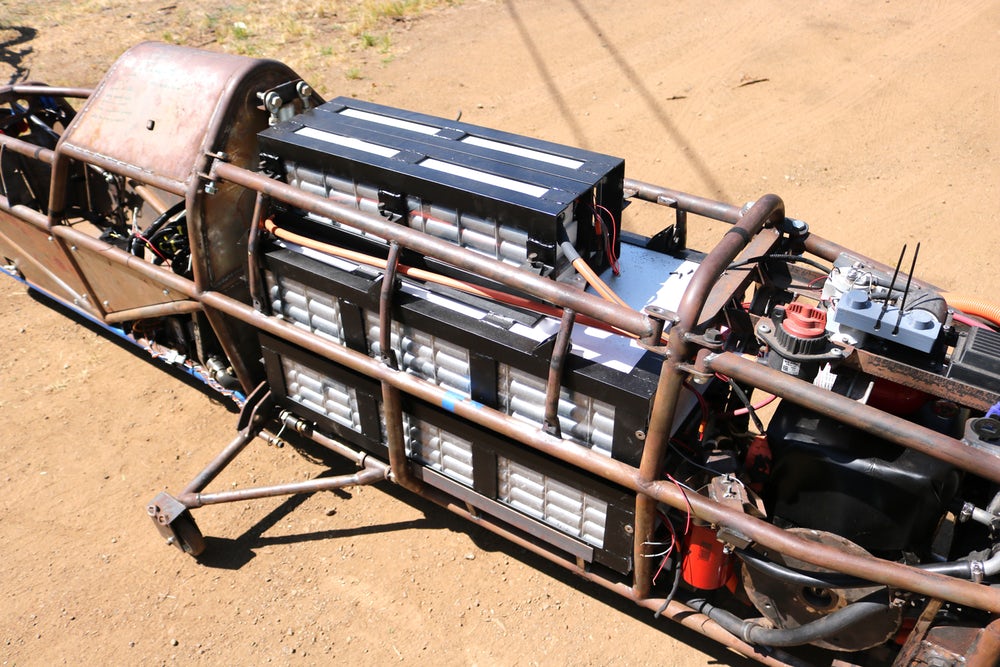 As he gained confidence after proving the drivetrain, his speed on each run increased past 65 km/h (40 mph), but the motorcycle still wasn’t stable enough for Shea to feel comfortable lifting the auxiliary stabilizer wheels. As he described to New Atlas‘ Loz Blain:

“I kept the stabilizer wheels pretty low, just so I could test the throttle and brake before trying to balance. Once I felt confident about the drivetrain, I raised the wheels up and started to try to balance. The bike felt incredibly unstable starting out. I kept my first runs to about 64 km/h (40 mph) and it felt like i was trying to balance a pencil on my finger.

I could tell that the bike needed to go faster to get stable, I just had no clue how fast that was! If I went faster and the bike remained unstable, it would have been very easy for me to accidentally steer off the 6 meter (20 ft) road and lunge through a ditch into a barb wire fence. After a couple more sketchy runs, I decided to open it up and find where that stability transition was. I accelerated hard, the bike felt good during acceleration and when I got to around 98 km/h (60 mph), all of the wobbles and twitches fell off. The steering tillers went light and all i could think was hell yes!” 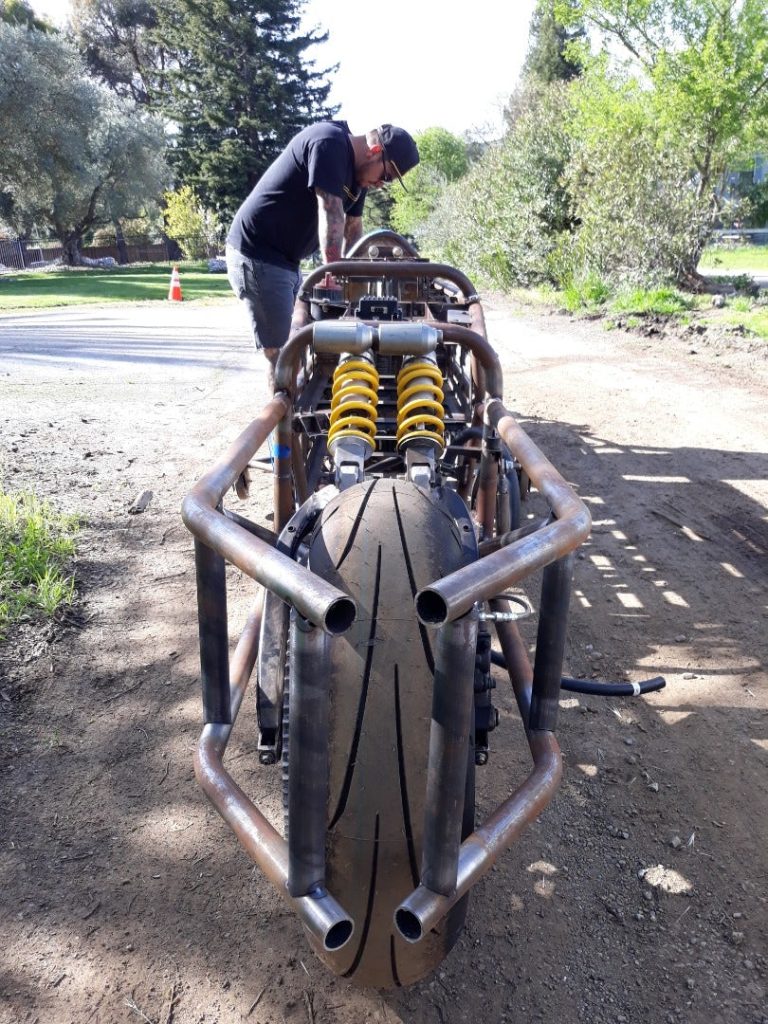 Ultimately Shea got the motorcycle up to nearly 130 km/h (80 mph) while only providing around 10% throttle. That bodes well for how much the bike has left to give.

The only question left is will Shea’s recycled-parts motorcycle be enough to set a new land speed record? 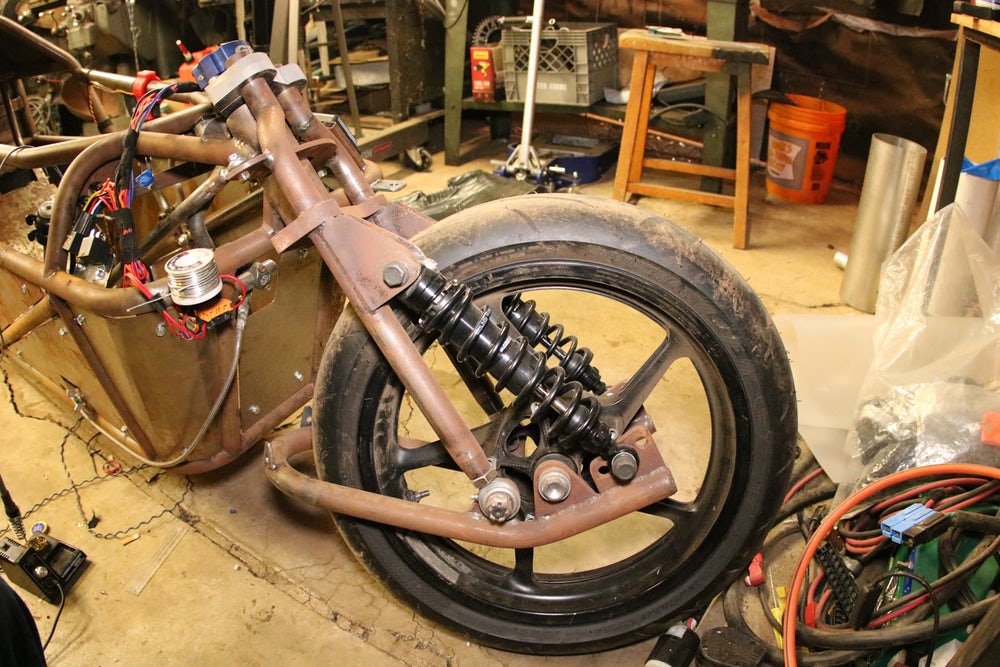 Keep checking back as we update on this fascinating quest and find out if Shea’s dream will make it into the record books. And watch the video below to see how Shea’s design works. It’s a pretty impressive feat of garage engineering!