Audi chases Techeetah at the Bern ePrix on Saturday, at a track with…a bear pit!?

The Formula E championship is coming up on its last few races of the season, with only this and the upcoming doubleheader in New York left to round it out.  This weekend Formula E returns to Switzerland for only the second auto race in the country in more than half a century.

In 1955, Switzerland banned auto racing nationwide in response to the 1955 Le Mans disaster where hundreds of spectators were killed or injured by a horrific crash.  This ban remained in place for 60 years until the country repealed it in 2015 – but only for electric racing.  The move was made to attract Formula E to the country, and last year Zurich held the first race in Switzerland since the ban was implemented.  This year the race moves to a new track in the de facto Swiss capital city of Bern with an interesting feature near the exit of turn 4 – an actual bear pit.  Like, a pit.  With bears in it.

But first, a race recap.  Before we talk about last race’s results, here’s the full race on Formula E’s YouTube page. Have a watch if you’d like. You can also visit the bottom of this post for a shorter video of the last race’s highlights.

Berlin provided a solid race on the wide Tempelhof circuit, with plenty of passing and, for once, not a lot of chaos.  The circuit also hosted a Greentech festival over the race weekend with exhibitions from green energy and mobility companies.

The wide circuit also included an attack mode activation zone which was very far off of the optimal racing line, causing drivers to lose more time to activate attack mode than any previous race.

It was an issue throughout the race, as the activation zone was so far off-line that a car would lose a good ~5 car lengths during activation.  This led to some drivers being hesitant to activate it, or even losing a place on activation and then having to fight to get it back with their increased power. 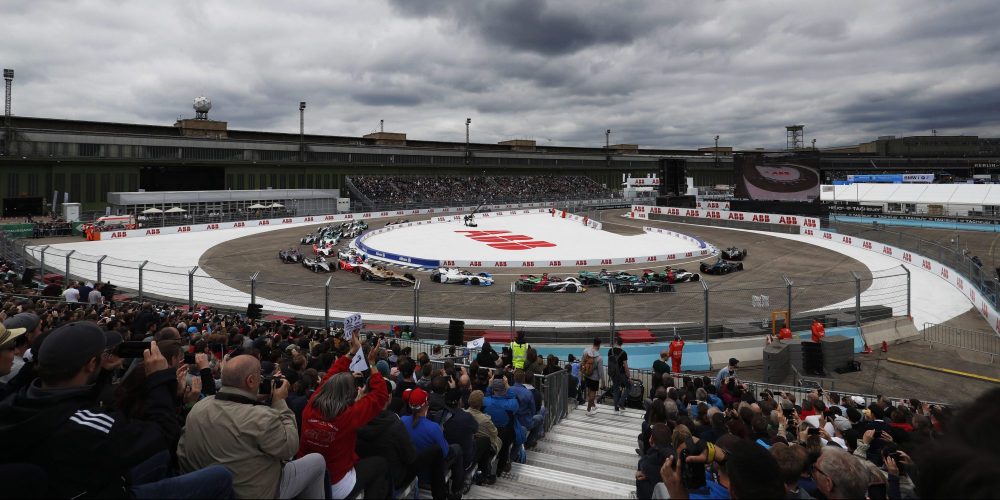 In qualifying, Nissan continued its good streak with Sebastien Buemi on pole, while both Audi cars qualified well in their home race.  Andre Lotterer had another qualifying disaster and didn’t set a time as he crossed the line too late to begin his qualifying lap.

The track was quite dirty off the racing line at the start of the race, but this didn’t stop Lotterer from fighting hard from his starting position at the back and gaining five places in the first few laps.  Buemi held first place only for the first seven minutes of the race or so, when Lucas di Grassi took the lead and started to drive away with it.

We saw the same pattern as we did at Monaco, where the Nissans had good qualifying pace but poor race pace.  At different times during the race, both Buemi and Oliver Rowland were holding up large trains of cars behind them, causing some frantic jockeying for position from the following cars as they tried to pass the Nissans.

Despite the jockeying, there was relatively little chaos within this race, with all but two cars finishing and none retiring due to crashes.  Alex Lynn retired after his rear axle locked up and left him stuck on the track, and Lotterer had a battery issue which caused him to have to pull into the pits.  A shame for him, as he had gained a lot of places after starting from the back, and would have had quite the comeback story had he finished in the points.

In the end, di Grassi managed to maintain the lead he gained from Buemi and came in first place for Audi at home.  His teammate Daniel Abt had a solic race and finished 6th.  Rounding out the podium were Buemi and Jean-Eric Vergne.  Vergne started 8th and ended up on the podium, an impressive performance from him.

Nissan scored good points with their 2nd and 8th place finishes, they are rising in the championship but even with their recent good form they’re too far off for the win unless several miracles happen.  Audi managed to close the gap to Techeetah by quite a bit, and are 25 points behind – a lot, but definitely doable within three races.

We’ve had a lot of news in the last week, mainly around the release of next year’s tentative Formula E calendar.

Switzerland and Monaco are both off the calendar, with Monaco being replaced by Seoul, South Korea (Monaco hosts the race biennially, as they also host a historic Monaco grand prix every other year).  The proposed Seoul track would be in Seoul’s Gwanghwamun Plaza and City Hall Square areas.

The calendar spots which were occupied by Marrakesh and Sanya are currently labeled as “unconfirmed,” with the latter slated to happen at some unannounced city in China.

What’s interesting about this is that the calendar clashes with the World Endurance Championship in three instances.  A lot of drivers compete in both championships, so these conflicts can cause a lot of chaos.

For example, two years ago, Buemi, who was the reigning Formula E champion at the time, was slated to win a second championship after a dominant season but had to miss out on the New York ePrix doubleheader weekend.  Because of missing these two races, di Grassi became the champion in the end.

Buemi still drives in WEC (his team won the 24 Hours of Le Mans and WEC championship last weekend), as do several other Formula E drivers, and it’s likely there will continue to be overlap between the rosters next year.  Because of this, we may still see some further changes to the proposed Formula E calendar for next year.

2019 Bern ePrix – what to expect (hold on, we’re almost to the part about the bears)

The main storyline here is whether Audi will continue to catch up with Techeetah or if Berlin, which they’ve traditionally ran well at, was just a fluke.  Techeetah still looks like they’ve got the edge, but it’s not enough to count Audi out yet.  Virgin, Nissan, and Mahindra could still catch up, but Nissan’s race pace hasn’t been excellent and Virgin and Mahindra have been flagging lately.  It’s looking like this is a two-way race for the teams’ championship.

As for drivers, it’s still too close to call.  Reigning champion Vergne is on top but only by 6 points over di Grassi, who was champion two years ago and has been driving in Formula E since day one (he was the series’ original test driver).  Lotterer isn’t far behind either. Antonio Felix da Costa and Robin Frijns are still in with a shout as well.  Everyone else seems unlikely to catch up.

We’ve never raced on the Bern track yet, so we don’t quite know what to expect.  The track is a little different than most Formula E tracks though, as street racing necessitates a lot of 90-degree turns, hairpins, and chicanes to break up long boulevards. 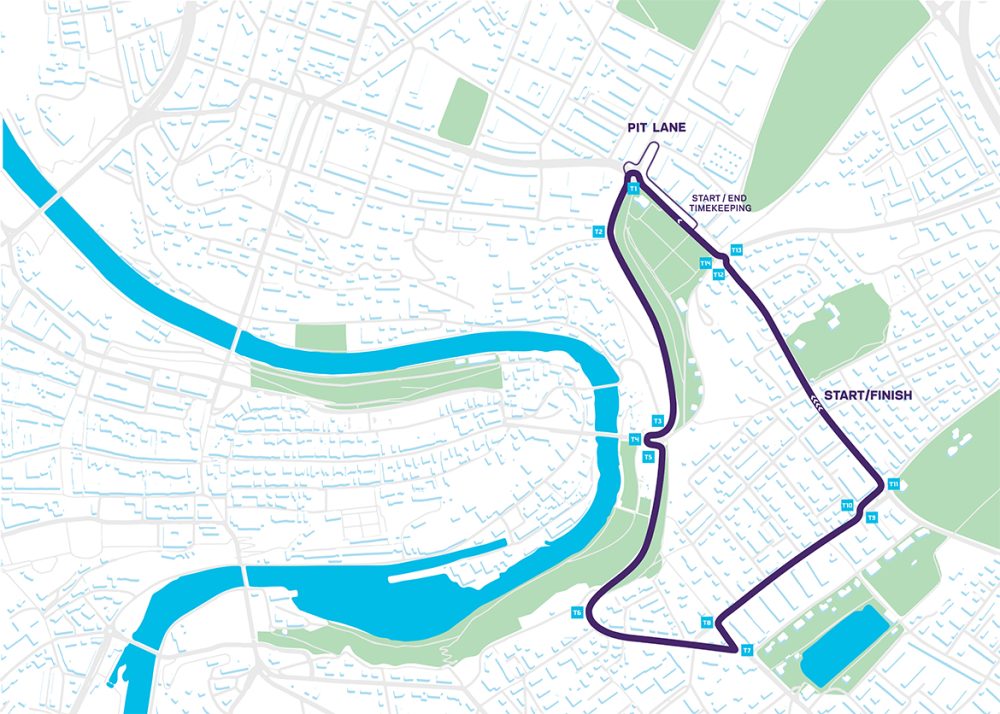 Bern’s streets are more flowing and curvy than a lot of the city centers Formula E races at, making for a track map that is at least a little different from a lot of the other ones we see in this series.

Formula E has published a track preview video if you’d like to take a look at the streets they’ll be racing on this weekend.  The track is heavy with elevation changes, which is uncharacteristic for Formula E, which typically has pretty flat tracks in city centers or park areas.

All the up-and-down will add extra stress to the batteries and brakes, and could make energy consumption more of an issue at this track than previous ones.  Depending on the weather, temperature could also be an issue, as batteries will be doing even more work than usual with extra power use and regen as the cars go up and down the hills.

And of course, I need to mention the bear pit.  Apparently, the city of Bern has a history with bears, with the bear serving as a symbol of the city since the 12th century.  Since 1857 there have been various bear pits open to the public in the city.  And it just so happens that the track drives past the bear pit near the exit of the turn 3-4-5 chicane: 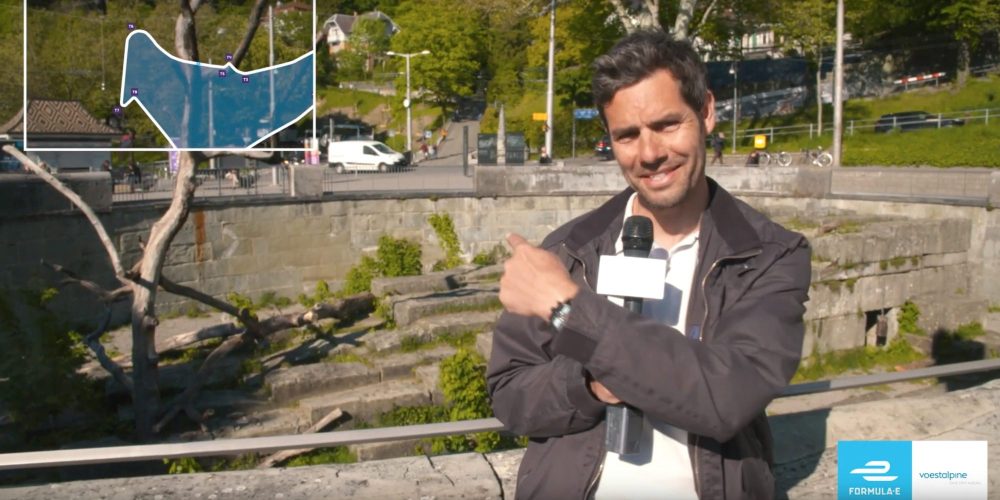 Maybe this won’t make the on-track action any more interesting, but given the chaos we’ve seen at some Formula E races this year (including hail at the Paris eprix), you never know what might happen.  This race marks a first for auto racing in Bern, but let’s hope we don’t hear about the first bear attack on an electric car this weekend.

It should be an interesting track for the last European race of the year either way.