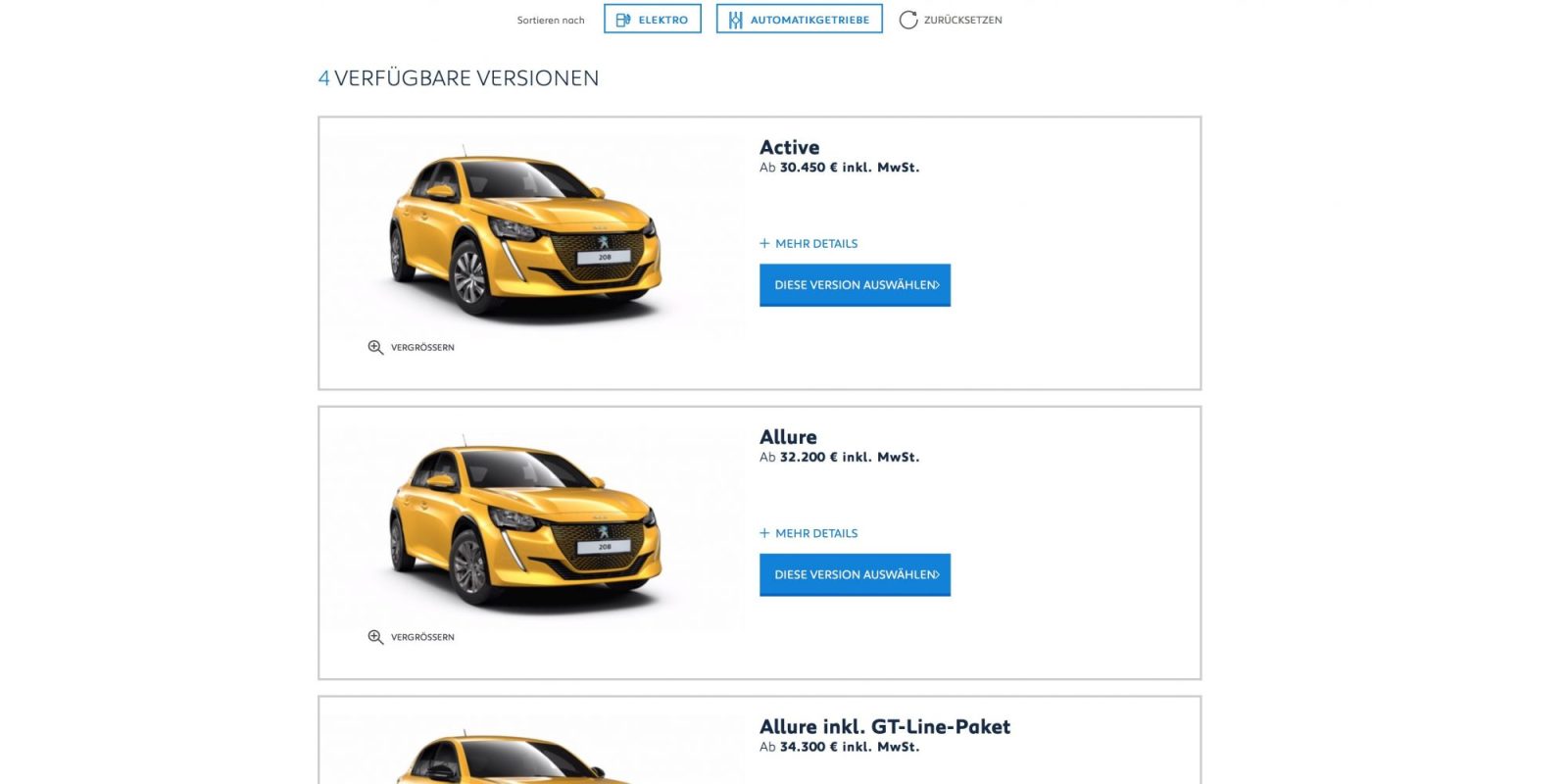 A few months after unveiling their new e-208 electric hatch, Peugeot has already added the car to their configurator in Germany.

Peugeot opened reservations for the e-208 in several European countries a few months ago, but this is the first configurator we’ve seen for the car, complete with prices and various option levels.

This price is a fair bit more than the diesel version’s €19,850 starting price.  The gas (“benzin”) version is also cheaper, coming in at €16,600 for the same “Active” trim level.  But then again, the electric version does have better performance than any of the fossil-powered models.

And compared to other EVs it seems to be quite a good price.  The base Nissan Leaf with a 40kWh battery is €36,800 in Germany.  The e-208 has a larger 50kWh battery, but costs over €6k less than the most-sold electric car model in Europe.  It’s not quite a fair comparison because the Leaf is a larger car, but this does mean a lower cost entry point for what seems to be a capable little EV.  One would think that this would help adoption.

It also throws the gauntlet down for the upcoming electric MINI and Honda e, both of which are in the same vehicle class (small European-style hatchbacks) and expected to have significantly smaller battery packs.  We don’t know the prices for either of them yet, but they might have trouble selling if they come in at the same price with significantly smaller battery packs.

If Honda and MINI want to be competitive, they may need to offer a car that’s closer in price to the base 208 – maybe closer to 20-22k post-incentive.

There’s also the comparison to the new Renault ZOE, though we haven’t heard a price on that yet, and the price isn’t likely to be comparable since Renault does a battery lease which makes prices hard to compare directly.

If you’d like to fool around in Peugeot’s e-208 configurator and don’t mind a little German, head on over to Peugeot’s site and click around a bit.  Make sure to select “Elektro” under “Wählen Sie Ihr Modell” near the top of the page.

I’m quite excited about this little car, and its cousin the Opel Corsa-e.  Both look like fun little cars, with more than enough range, good charge capability (100kW) and good looks to boot.

And now that we know the price is competitive with the electric competition (and gas competition, taking into account lifetime fuel and maintenance costs), that’s even better.  Given the high cost of fuel in Germany and the ease of maintaining an EV, this vehicle should offer a good value proposition for German drivers.  After all, who wouldn’t want a car that’s more fun, more convenient (as it can be fueled at home, rather than gas stations), cleaner and cheap to own?