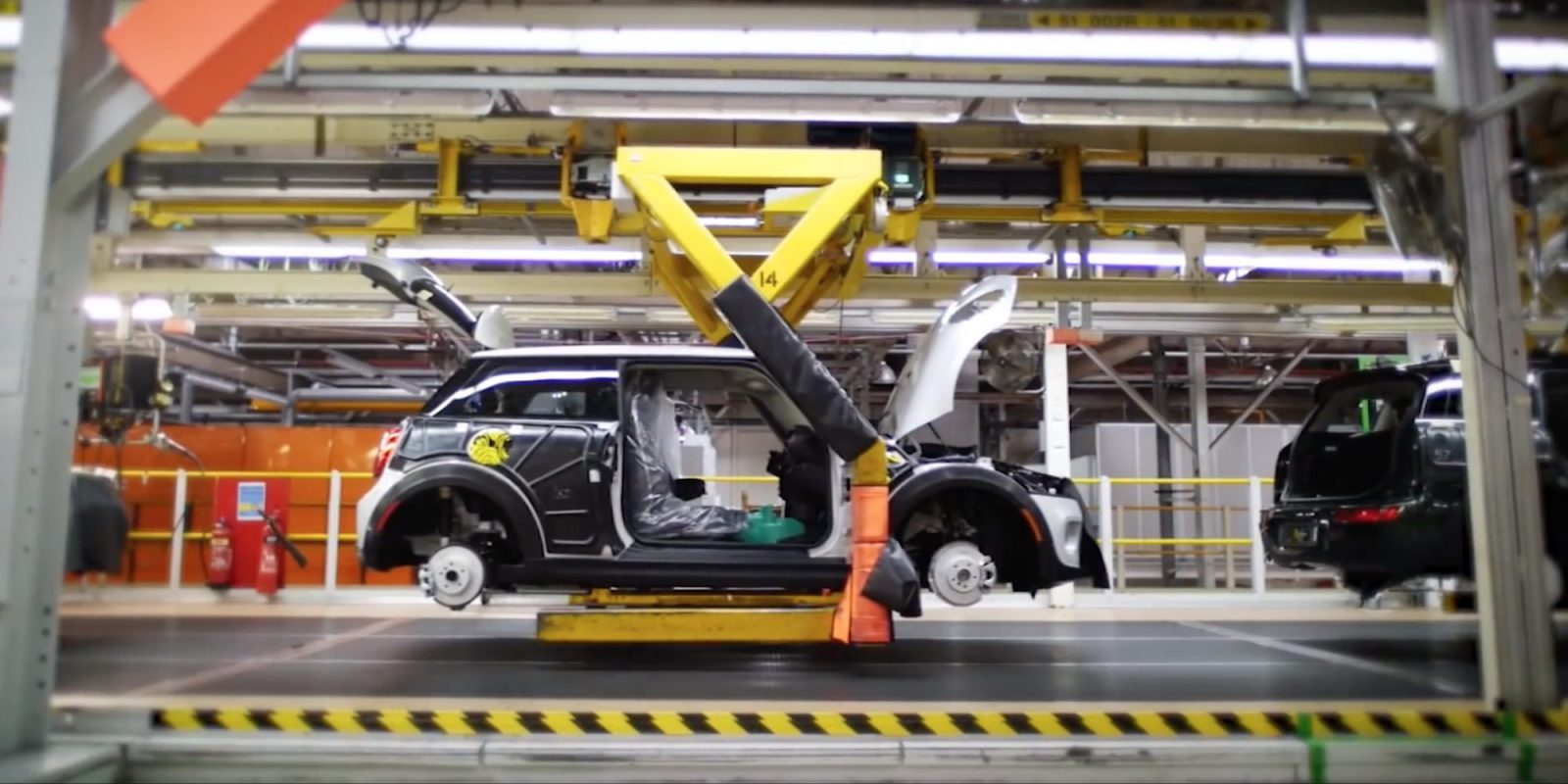 It’s been ten years since the original MINI E hit the road in limited numbers, and BMW is ramping towards production of a new model slated to be released next year.  This weekend we saw a short video of the MINI Electric‘s production line, showing that the car seems to be pretty far along and just about ready for prime time.

The video shows the electric Mini being produced in Plant Oxford, Mini’s primary assembly plant in England.  The plant produces around 200,000 gas-powered Minis per year.

Mini plans to produce the electric car in the same plant alongside the gas model (and also in China), though Mini have not yet stated any planned production numbers for the car.  They have also announced large investments into battery production in Germany to support assembly of the Mini electric in England.

It’s a short video, but it shows a few shots of the motor assembly and the batteries being plugged into the bottom of the car.  It seems to show several cars being produced, and specialized production areas for the Mini electric model.

This seems to show good progress for a car we haven’t heard a whole lot about yet.  So far, we expect the Mini electric to have a relatively small battery compared to the competition, using the same ~34kWh battery as the BMW i3, which is also similar in capacity to the original 2009 MINI E.  This should be enough to give the Mini about 120 miles of range, unless BMW ends up putting a larger battery in it before release.

The battery should increase the weight of the car by about 300 pounds compared to the gas Mini.  In 2009, the original Mini E, with almost the same capacity battery back as the planned 2020 Mini electric, weighed about 600 pounds more than a gas Mini.  Unlike the 2009 MINI E, which put the battery in the place of the two back seats, the 2020 model put the battery on the bottom of the car, which should improve handling significantly.

Another development since 2009 has been significant competition in the space.  There are several other electric hatchbacks on the market, and most recently Peugeot and Opel/Vauxhall, all part of the Groupe PSA alliance, have announced similar “European electric hatchback” models, the Peugeot e-208 and Vauxhall Corsa-e.  Each of these models have a little over 200 miles of range, which is becoming the standard for new entry-level EVs these days.

One would think that the larger battery packs in the e-208 and Corsa-e would offer more power than the Mini, but all three cars are expected to do 0-60 in about 8 seconds, so they should feel pretty similar performance-wise.

As a former “MINI E Pioneer,” I’ve been keenly interested in following the development of the electric Mini.  Over the years we’ve seen lots of concepts, though BMW has gone back and forth over whether they would ever electrify the brand.

In 2009, the MINI E was a fantastic car.  Even though BMW brought it from concept to production in only one year and it was very clearly a retrofit and not meant for primetime/public consumption, it was extremely fun to drive and for the most part all of us Pioneers loved it and wished we could have kept it at the end of the lease period.

So the fact that it has taken this long for Mini to commit to building one, and building one which has very similar specs to the original from ten years ago, is a little bit disappointing.  I’m sure the car will be great fun, just as it was before, but the industry has moved a lot since then and there’s competition which looks to have better specs.  That said, 120 miles is still more than enough for most people, whether they realize it yet or not.

Hopefully Mini has a few more surprises in store for us in terms of specs, or a very compelling price.  But Mini has always been a bit of a premium brand, so it’s hard to see them coming in under the price of the Peugeot and Opel hatchback offerings.  If the Mini comes out with lower specs than them at a higher or similar price, it might be a tough sell unless they have something more in store for us.

I hope they do, and I can’t wait to drive it regardless.  I loved that car.