Honda has revealed more information about its Honda e urban EV, including details on the new electric car’s battery and platform.

A new look at the car from Honda reveals its compact water-cooled 35.5 kWh Lithium-ion battery, which can be charged using either a Type 2 AC connection or a CCS2 DC rapid charger. The charging port is integrated into the car’s hood.

Honda is still touting a 200 km (125 mile) range for the Honda e, and an 80% battery charge in 30 minutes. No onboard charger capacity nor any top fast charging rate has been disclosed.

The dedicated platform has been developed with a focus on urban driving. From Honda:

The battery is positioned at a low level under the floor, and centrally within the wheelbase of the car, affording a 50:50 weight distribution and low centre of gravity for optimal handling and stability. Power from the high-torque electric motor is delivered through the rear wheels, enabling steering precision even at high acceleration.

The platform offers a combination of ride comfort and agility. The four-wheel independent suspension is engineered to offer outstanding stability in all conditions, a smooth ride and responsive handling. Elements of the suspension components are forged aluminium to reduce weight and benefit performance and efficiency. 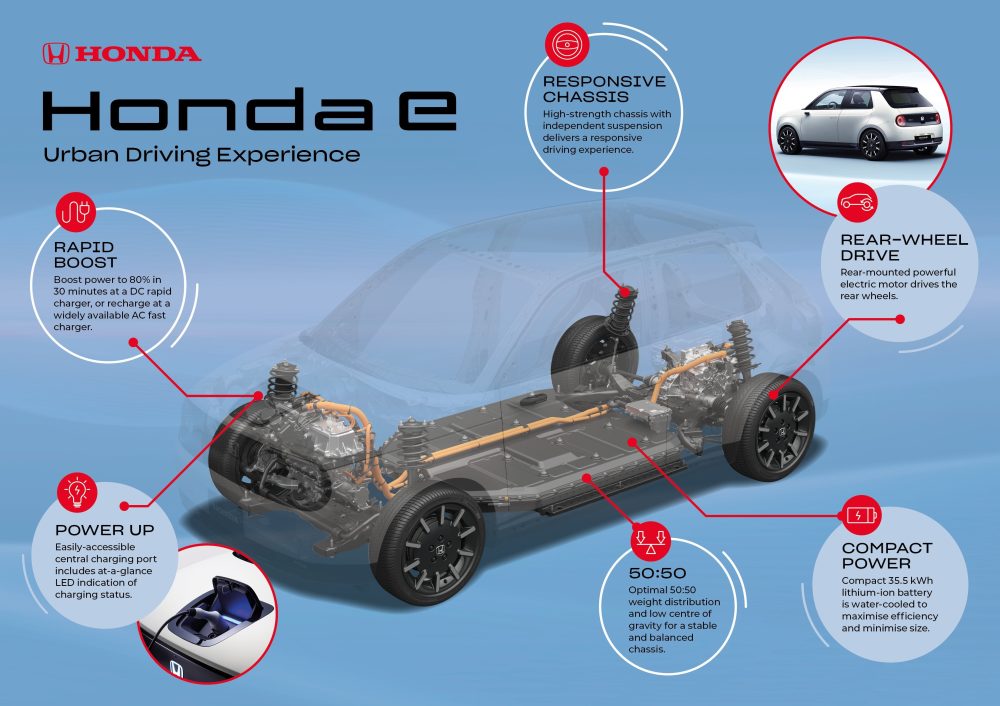 Honda also revealed the new electric car has received 31,000 “expressions of interest,” though it’s unclear how many actual reservation deposits have been made at this time. Prospective owners can make reservations in the UK, Germany, France, and Norway with a refundable deposit — those reservations started in May — and would-be owners in other European markets can still register their interest online.

Honda has slowly but surely released more info about the Honda e over the past month. Just a few weeks ago, Honda revealed that a side camera mirror system would be standard on the car. About a week before that, the carmaker revealed five color options when it opened reservations.

One thing we’re still waiting to hear is a price as the car approaches production later this year.