This year marked the 100th anniversary of the Barcelona International Motor Show. Among the rows and rows of fancy new cars sat a number of impressive electric motorcycles and scooters as well. Below are our top five favorites.

As part of the celebration marking 100 years of Barcelona International Motor Shows, a new wing was added for electric micromobility. This included everything from electric motorcycles to kick scooters and self-balancing machines.

Among the personal electric vehicles were a number of impressive designs that were each an innovation in their own way. The following five were my favorite, and are presented in no significant order. They all deserve the top spot!

Pursang, a Barcelona-based electric motorcycle startup, is reviving the original Pursang motorcycle from the 60’s.

The name Pursang comes from Bultaco’s US-version gas motorcycle, originally introduced in 1965. The new Pursang company isn’t ready to start delivering motorcycles just yet, but they are getting close. They were on hand at the Barcelona Motor Show to demonstrate their current production prototype. 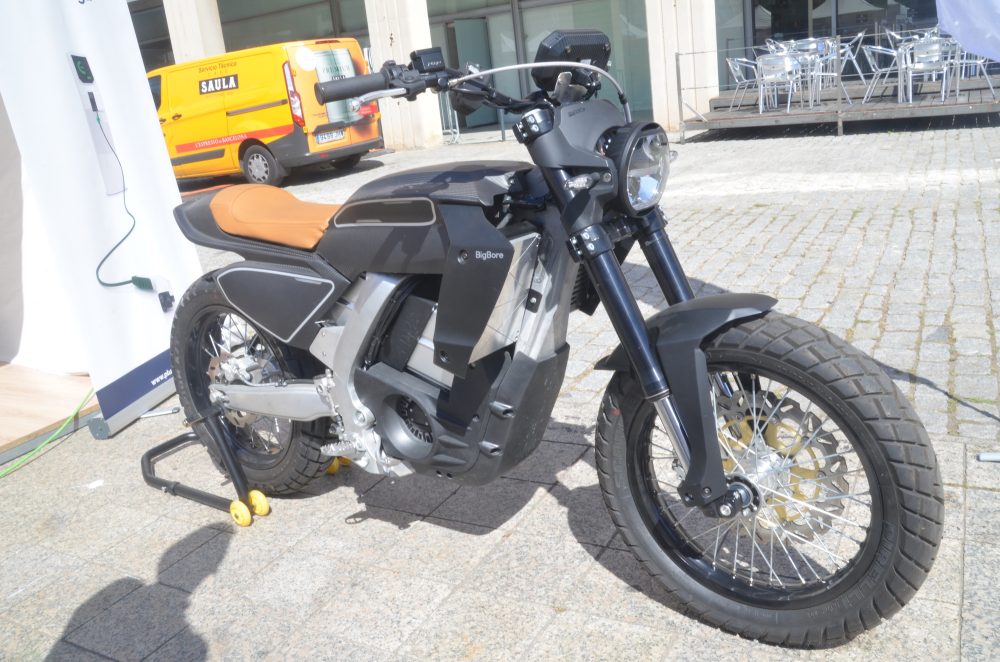 The rebirth of an electric Pursang will come in two forms: the 6 kW E-Street and the 11 kW BigBore. The BigBore was on show and is pictured above.

The BigBore is expected to reach a top speed of 120 km/h (75 mph) and provide an electric range of 100 km (62 mi) with two batteries. That would make it a largely urban assault-type electric motorcycle that would still be capable of short jaunts at highway speed.

The original plan was to use batteries manufactured by Torrot, but the company is now switching suppliers, which may have delayed their anticipated rollout date.

The BigBore sports a nice design and styling for a naked bike, marking a strong start for Pursang. The bikes are now available for pre-order reservations, but the company does not yet have an estimated delivery date.

I’ve been a big fan of Silence’s electric scooters ever since I first bumped into one at the Milan Motorcycle Show in 2018. I got the chance to ride a number of their electric scooters at the Barcelona Motor Show. 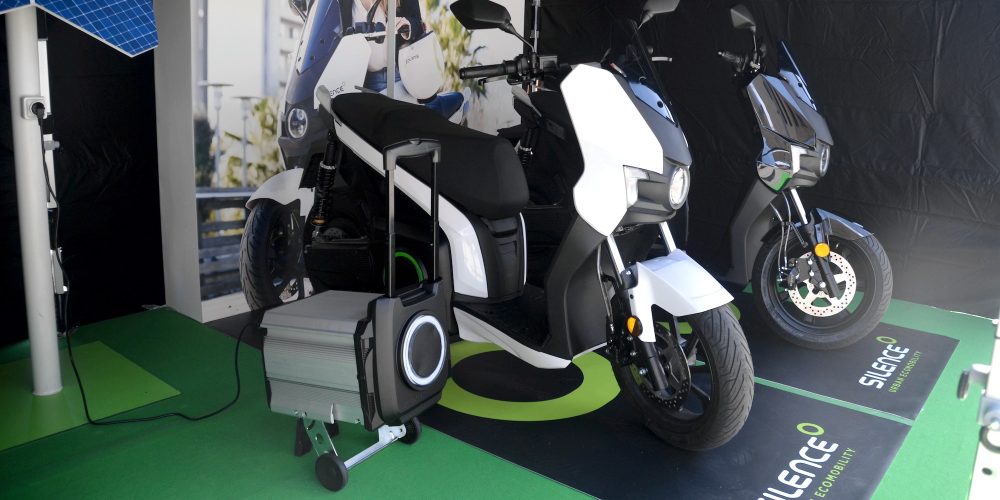 The scooters are impressively powerful, each sporting an 11 kW peak hub motor mounted in a single-sided rear swingarm. That power is sufficient to take the S01 up to 100 km/h (62 mph).

But what is perhaps more impressive than the performance is the battery. The Silence S01 uses a trolley-style rolling battery to provide more capacity and range in a removable format. The 5.5 kWh battery is the largest removable electric scooter battery in the industry. To remove it, you simply release a latch under the seat, then slide the battery out the side of the scooter. The battery’s wheels drop down as it exits the scooter, and a telescoping carry handle extends from the top of the battery. The battery can then be taken inside for charging separately from the scooter.

The high capacity batteries make it possible for the scooter to reach such high speeds and ranges, which require significantly more energy than other electric scooter batteries.

The batteries also have an optional inverter that allow you to run devices on 12 VDC or 220 VAC power.

Silence scooters aren’t cheap at around €6,000. But for the price you get a high speed, long range scooter that can be used in the city or on highways, and you get a pretty awesome removable battery. Check out my video below where I tested out the S01 scooter and also visited the factory where they are made.

NIU is one of the most advanced electric scooter companies in the world. They have a range of high-tech electric scooters which we’ve covered previously. But now we finally got our first up-close look at their flagship scooter, the NIU NGT. 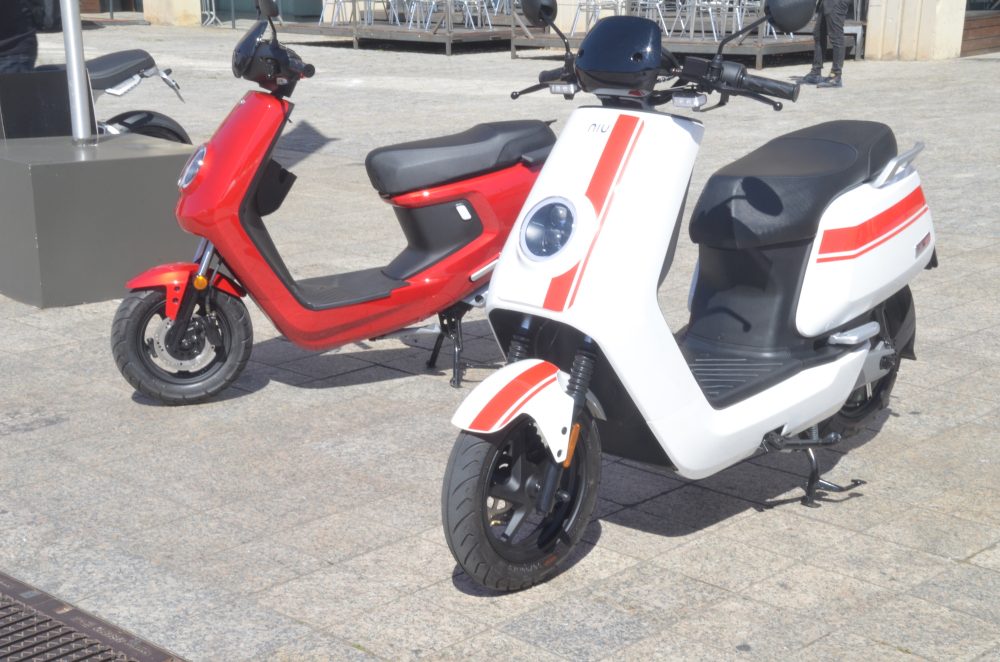 The NIU NGT includes two removable battery packs also made with Panasonic cells. The 14 kg (31 lb) batteries are each 60 V and 35 Ah (2.1 kWh). That results in a total capacity of 4.2 kWh, which is also relatively high for electric scooters – though not quite as high as Silence’s battery capacity.

NIU recently received approval to export their scooters to the US, so hopefully they’ll be available for sale stateside soon.

The Sunra MIKU MAX is a weird, wacky little electric scooter thing. I’m not entirely sure what to call it. It’s mostly a scooter, but it also rides and feels more like a motorcycle.

It sports a distinctive “C” shaped steel frame that leaves a large negative space under the seat. Theoretically, this can be used for storage, though adding a couple of cargo nets on either side is probably a good idea. 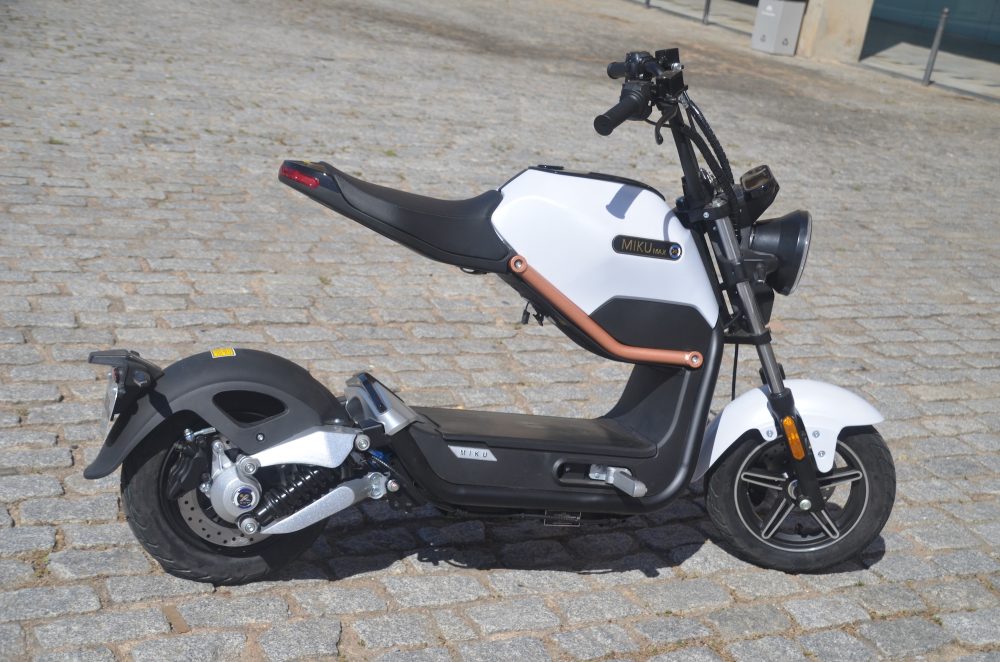 The scooter features front and rear hydraulic disc brakes, dual suspension, and a digital display meter, though the display isn’t the most visible I’ve seen. But it sure is fun to ride! I’ll have a “first ride” article coming soon, but suffice it to say that it is much sportier than you’d expect from only an 800 W motor.

The Doohan iTank, sold locally in Barcelona under the “mui” name, is one of those odd-looking electric scooters that you really need to try yourself. It is a three-wheeled leaner that tilts up to 30º in either direction, helping it ride like a normal scooter and corner very similarly. That means it doesn’t have the “wants to throw you off” feeling of a standard non-leaning trike.

The front wheels can also raise up independently to 183 mm (7 in), allowing riders to tackle uneven terrain or drops from street curbs. 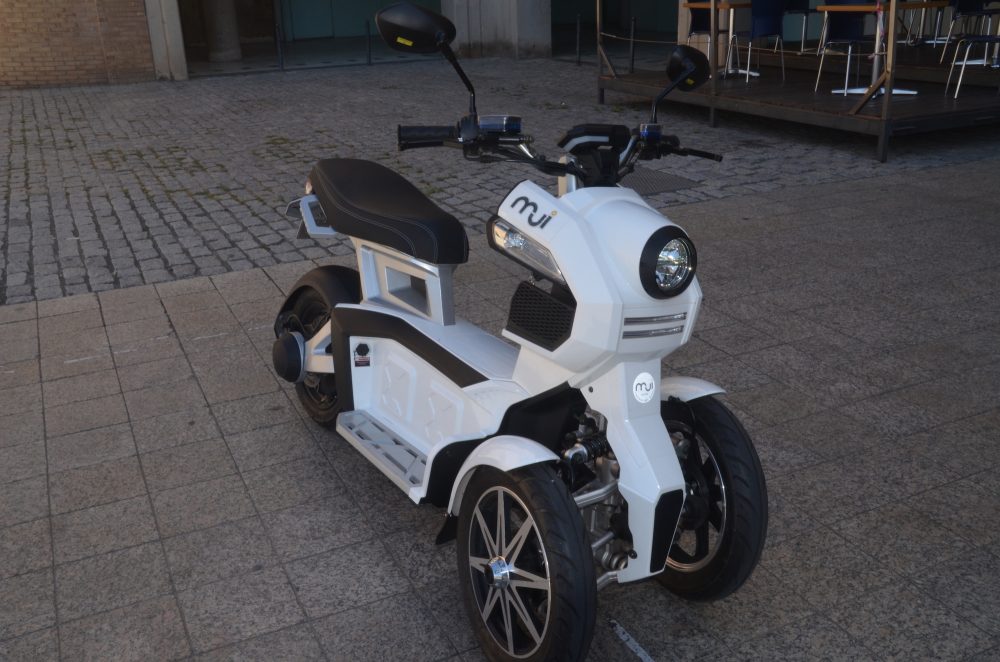 The three-wheeled design is more stable than a typical two-wheeled scooter and also offers quicker stops thanks to three dual-piston hydraulic brakes. Front and rear hydraulic suspension is also standard on the iTank.

The 9 kg (20 lb) batteries can be charged on the scooter or removed for charging indoors. The batteries are built using LG or Panasonic battery cells (depending on the market).

We were fortunate enough to have the opportunity to test ride nearly all of these personal electric vehicles. We already shared the Silence S01 riding experience, and we’ll be sharing more about the rest of these vehicles soon.

Each offers an interesting glimpse into the future of personal electric transportation, and I’d be happy to ride any of these to work everyday!

What do you think of these vehicles, or which would you like to see next? Let us know in the comments below.