Believe it or not, this belt-drive titanium bicycle is actually a slick e-bike

NUA Bikes is a Barcelona-based bicycle manufacturer that is known for some very eye-catching and high-end titanium bicycles. As seems to be the trend with bicycle manufacturers these days, NUA has just announced their first electric bicycle model, the NUA Electrica. It combines a minimalist and lightweight design with top-shelf components.

The company uses four sizes of hand-built titanium frames, S, M, L and XL. They also offer custom sizes that are built uniquely for each customer, creating the perfect bike for each rider.

Now NUA’s bikes are getting an electric boost thanks to an electric motor and battery combo from a Zehus Bike+ drivetrain.

The Zehus Bike+ motor system looks like a standard rear hub motor, albeit encased in a chromed out shell.

The Bike+ system also manages to pack a controller and battery into the motor casing, meaning all of the bike components are housed within the rear wheel. That makes the NUA Electrica a stealthy electric bike that blends in like nearly any other pedal bike. 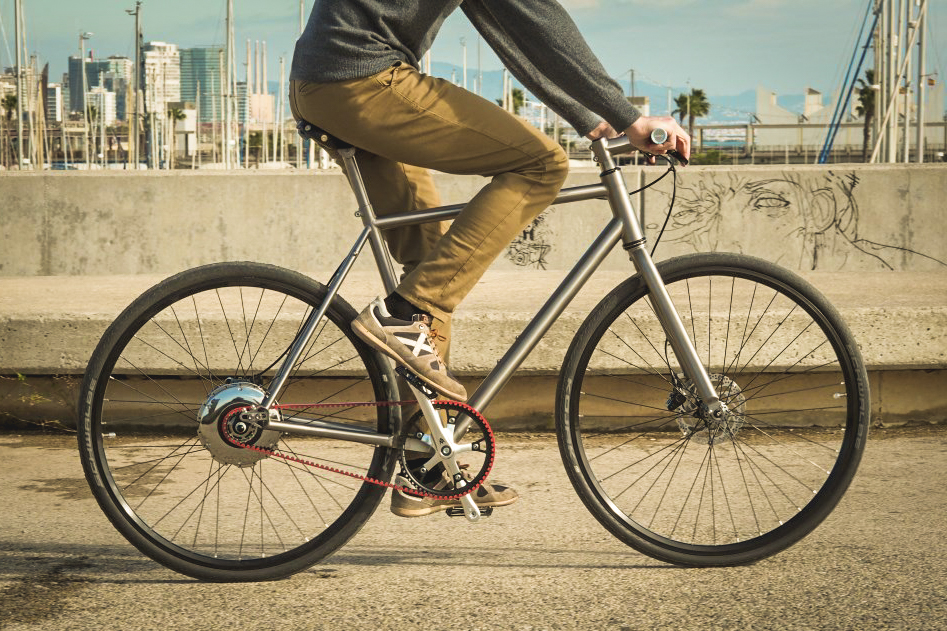 The entire bike weighs just 13 kg (28.7 lb), making it one of the lightest full size electric bicycles on the market.

“The genesis of the Electrica was the willing to create the perfect E-commuter. Nua’s vision implied aiming for an e-bike with all the advantages of a conventional bike – simplicity, lightweight, ability to reach high speeds – without the drawbacks of commonly designed e-bikes – wires, weight, worrying for the battery level of charge and being stuck in case of low level of charge.”

There is also the Bike+ mode which only helps riders by adding assist on uphill sections and while starting from a stop. On flat ground, the motor regenerates electricity to charge its built-in batteries. Theoretically, the rider never has to plug in the bike to charge when using this mode as the bike will continuously charge itself.

If that sounds like it violates the laws of thermodynamics, then don’t worry. The universe is still working properly. You’re not getting free energy here – you’re just making normal pedaling ever so slightly more difficult most of the time, in order to get an e-assist at other times when you need it most. It’s like putting a bit of your paycheck away every month for a rainy day fund. Except that it’s electricity. And that you get it back each time you hit an uphill or take off from rest. Ok so it’s nothing like putting money away. But you get the point. 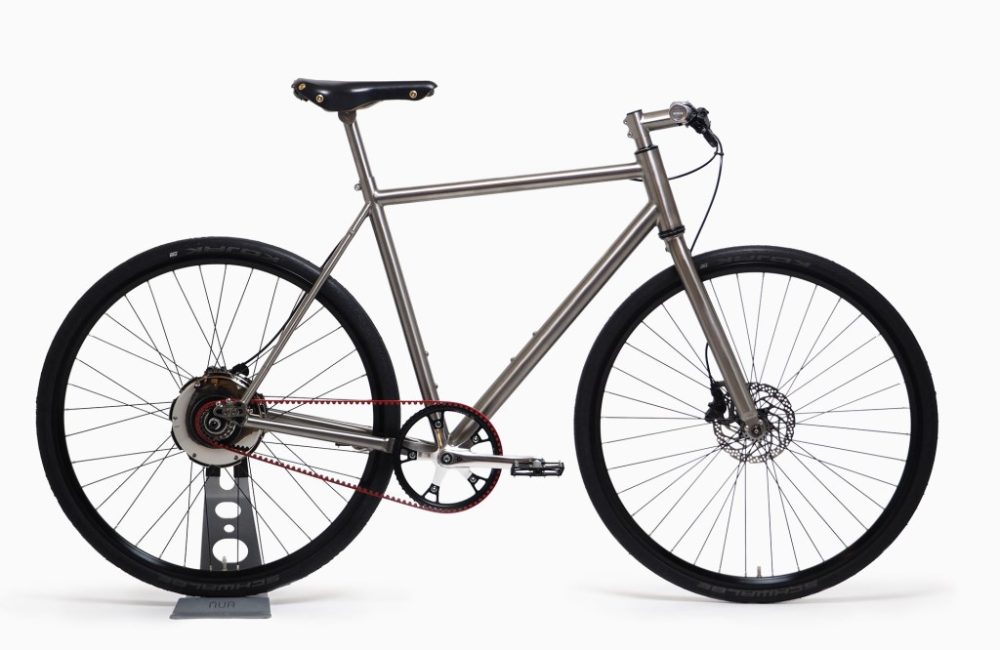 The 2.8 ratio on the Electrica means riders can hit 33 km/h (20.5 mph) at 90 rpm pedal cadence, which should be appropriate for most commuters. And with such a light e-bike, you can easily pedal past the motor’s max assist speed of 25 km/h.

Other nice features of the NUA Electrica include a top shelf leather Brooks saddle and matching hand grips, Shimano Deore hydraulic disc brakes, Shimano Alfine cranks and DT Swiss rims. None of these are cheap parts, and each helps contribute to the relatively high MSRP of €3,995. Deliveries will begin around the end of July, so you have a bit of time to think about it.

And to be fair, that’s par for the course compared to other nice Gates belt drive bikes, and those don’t even offer lightweight corrosion resistance titanium frames.

As Antoine Daures explained to Electrek:

“We offer titanium frames because we want our bikes to be durables (“bikes for a lifetime”) and we resist the industry trends of planned obsolescence, so we had to offer it with the right motor, both in terms of capabilities, consumption and design. The Italian Zehus “bike + motor” solution convinced us because it offers this particularly satisfying mode that provides unlimited autonomy, only assisting you when it is really needed, such as during climbs and starts, as well as charging itself using only a small part of the rider energy when riding on flat zones. For us this sounded brilliant – an e-bike that could not run out of electricity and consumes just a small amount of energy.

This allowed us to offer simpler e-bike compatible with our values: something simple, elegant and responsible.”

The Catalonians sure know how to make high quality e-bikes.

The combination parts on the NUA Electrica is definitely top notch. Gates Carbon Drive systems using those super quiet belts are simply a pleasure to ride. I spent a good amount of saddle time on another bike with a Gates belt drive setup and it was incredible. No maintenance, no noise, sooooo smooth. Those systems are expensive but they provide amazing performance.

The Zehus Bike+ system is also very nice, but that 160 Wh battery is going to be fairly limiting. Even though they say 30 km of range, that’s with a pretty good amount of added leg power. That works out to about 5 wh/km, which isn’t very much energy. So this is definitely an e-bike designed for those that like to pedal. But if you want a stealthy, lightweight and unique e-bike, the NUA Electrica looks like a great way to get there.