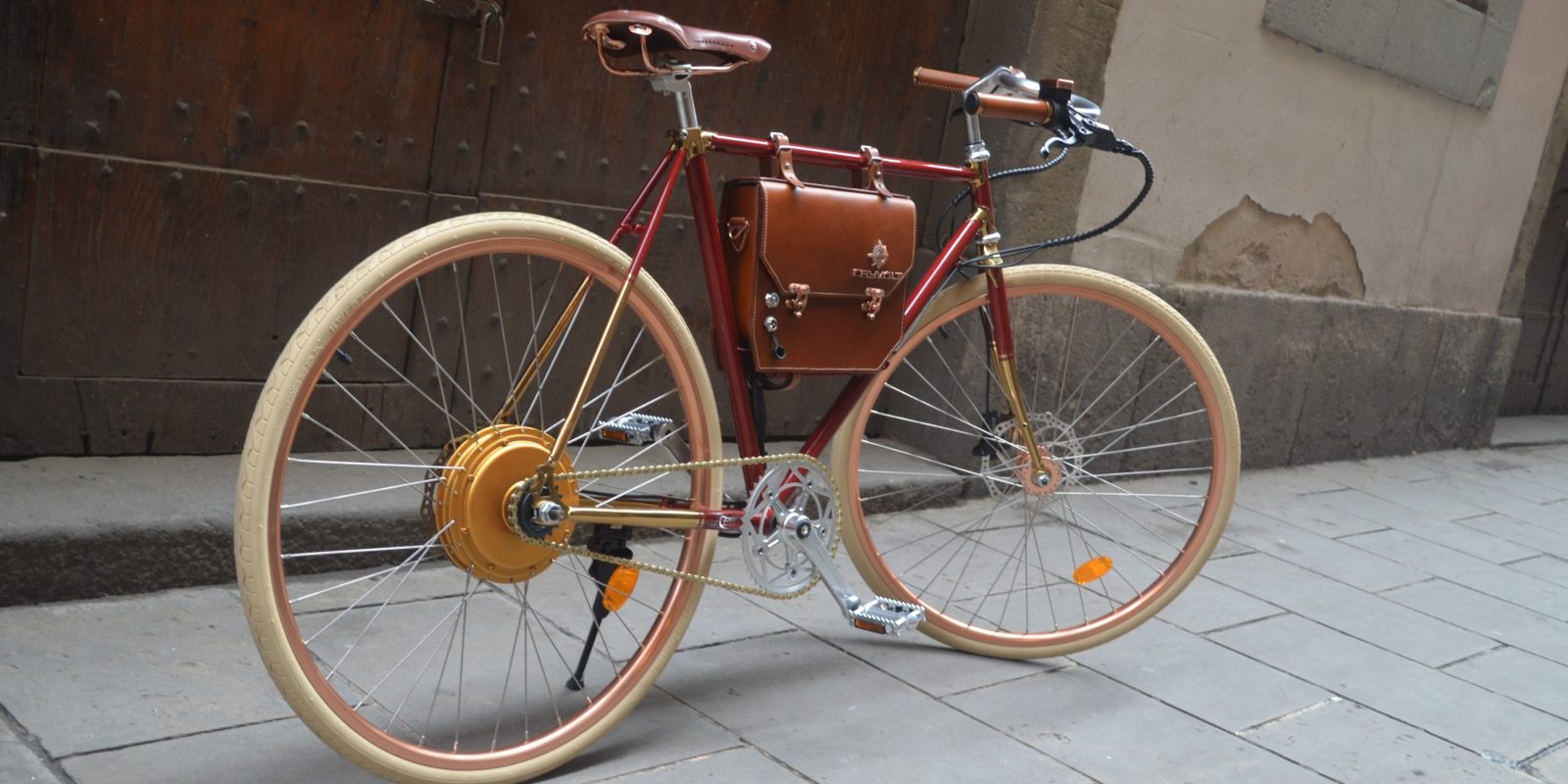 Rayvolt is a premium electric bicycle manufacturer located in Barcelona. They are celebrating three years of operation today and invited Electrek out to Barcelona to see their full line of vintage-inspired e-bikes. Despite their young age, Rayvolt has built an impressive number of bikes that have been delivered all over the world.

I first learned about Rayvolt after stumbling upon them at the Paris Motor Show.

Despite an impressive lineup of the fanciest cars in the world at the show, I saw Rayvolt’s bikes from a distance and was immediately drawn in.

The bikes are inspired by a vintage and almost steampunk design.

They have models ranging from cruisers to road bikes and even cargo bikes. But they all share the same classic flair with design notes that rely heavily on beautiful leatherwork and copper accents.

And with a large dealer network spanning Europe, Asia, North America and Africa, there are already many happy Rayvolt riders around the world. In fact, one of the biggest complaints from dealers is the long wait times caused by such high demand and limited production rates. 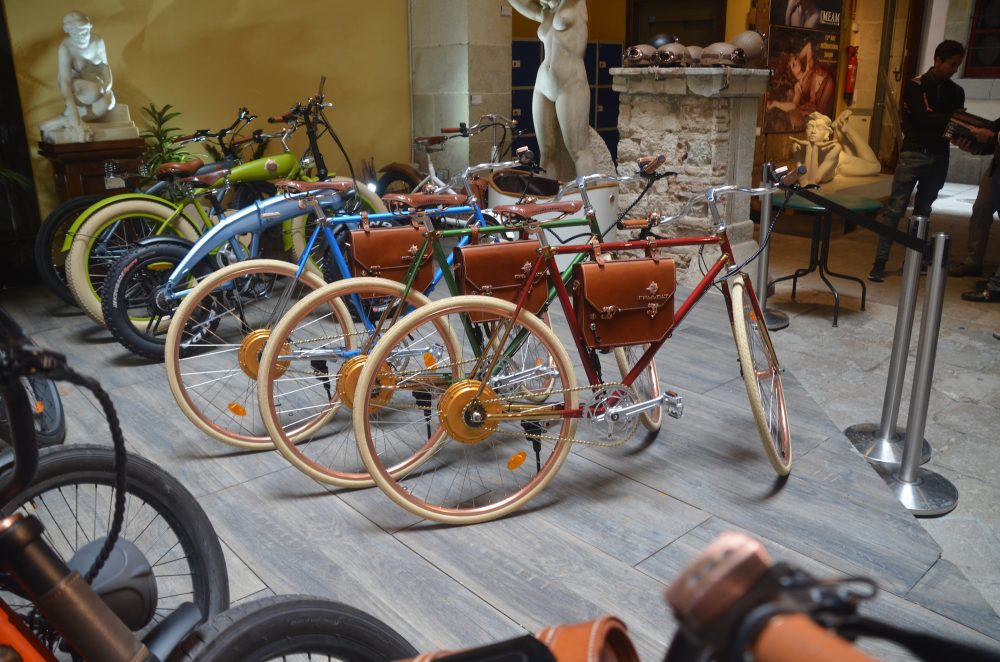 In addition to the outward beauty, the bikes also have some very sophisticated technology built into them — all developed by Rayvolt’s own engineers. Riders can dial in exact performance specs from the in-house smartphone app, including everything from top speed, power, regenerative braking strength and more. A built-in gyrosensor increases pedal assist on steeper hills and will also be used in the future for additional features. Anti-theft tracking is provided by a combination of GPS, WiFi and Bluetooth. Once a rider arrives in the vicinity of their stolen bike using either GPS or WiFi, they can activate Bluetooth and use a meter indicating the strength of the signal (i.e. distance from the bike) to determine exactly where the bike is, down to the correct room or garage.

Below, I’ve detailed a selection of their different bikes, each impressive in its own right. And make sure you read on until the end to see the newest and most radical project the company is working on, an electric motorcycle.

The Cruzer is definitely Rayvolt’s flagship model. It was the company’s first model and is now in its third version. Each version has seen incremental updates to reach the polished product shown off today.

The Cruzer is often described as the Harley-Davidson of e-bikes. It has a stretched wheelbase and is incredibly fun to cruise on. It’s not the most nimble bike though, as I found while winding my way through narrow Barcelona alleyways. 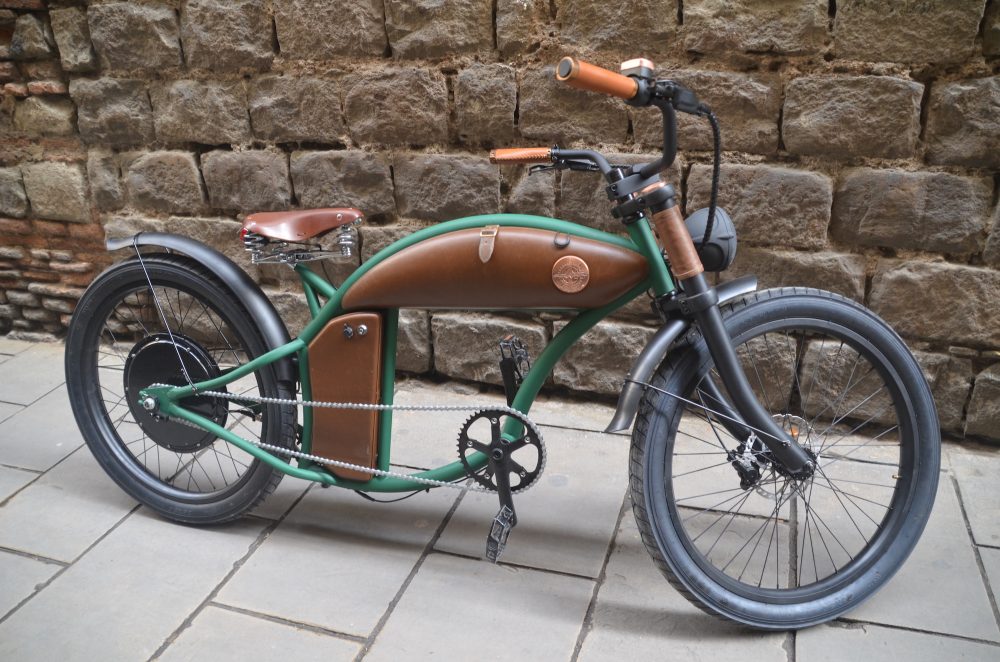 It offers a 400 W or 1,000 W motor option, and both can be detuned in seconds using the app to reach EU restricted levels.

The saddle is real leather, while the rest of the leatherwork is actually “vegan leather” which was a new concept to me. Apparently it’s made of some type of polyurethane. However it looks and feels just like real leather. They stuck with real leather for the saddle though since it makes a difference when it’s in contact with the rider.

The vegan leather faux-tank is actually a glove box that is large enough to fit a charger and other goodies, or a light jacket.

There are tons of accessories that can be added from leather storage bags to louvered headlights and even a second seat for carrying your girlfriend (or boyfriend!) around with you. The bike may look huge, but it comes in both medium and large, and I saw a rather small lady working the medium size just fine. 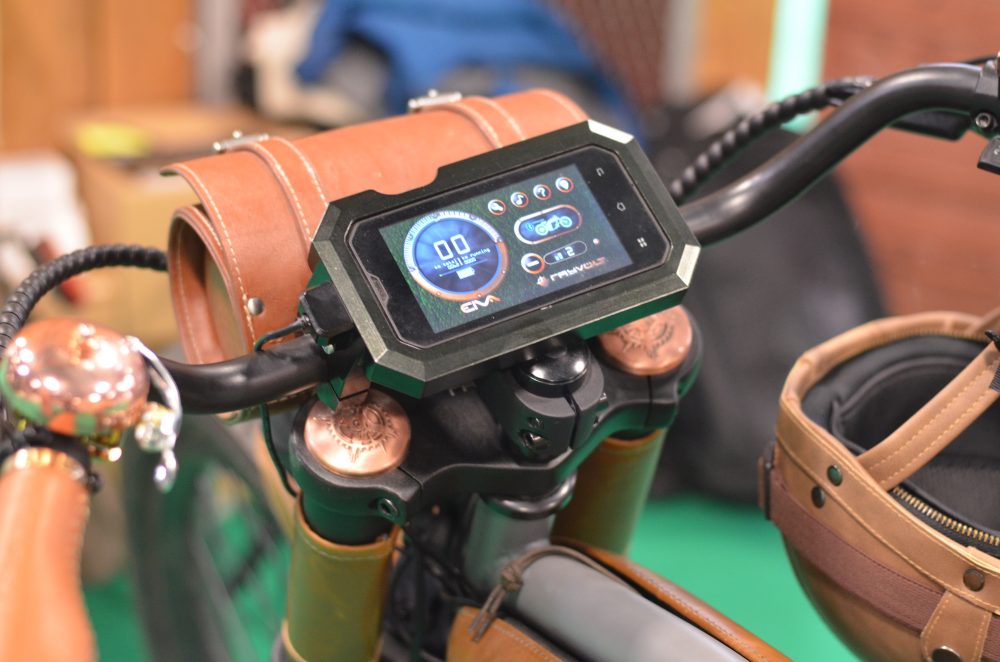 The base model comes with a 48V 10.4Ah battery, but it can be upgraded to 48V 20.8Ah. That not only gives better range, but allows the rider to increase the power by an extra 50%.

The motor was custom developed by Rayvolt and uses their own proprietary software in the built-in controller. 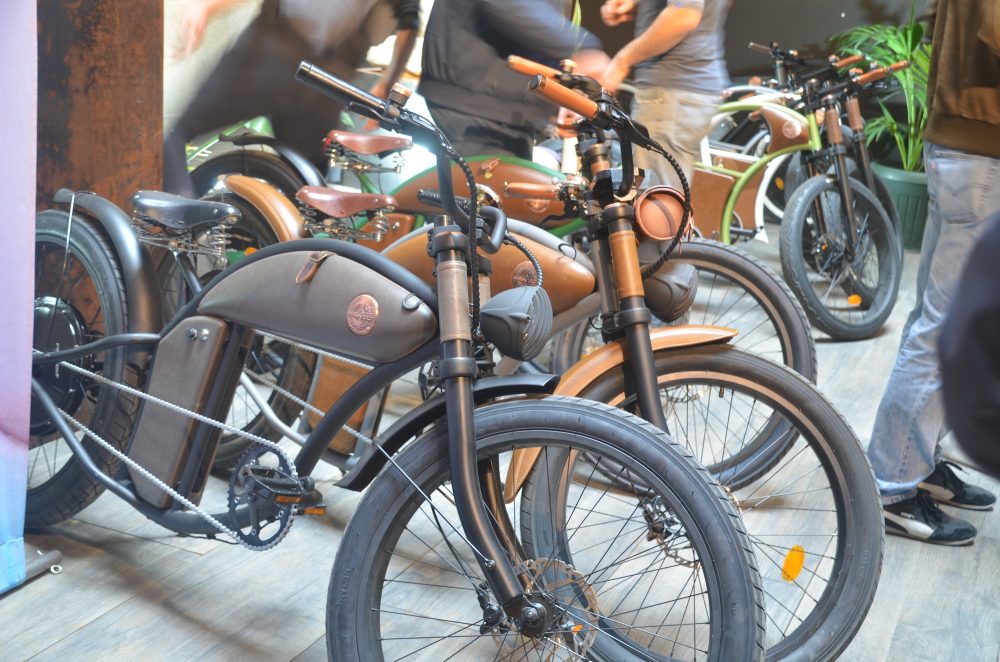 Considering that this bike can hit speeds of 50 km/h (31 mph), the hydraulic brakes that come standard are a nice touch.

The Rayvolt Cruzer was the first model and thus has the most units in circulation, with over 1,600 sales so far. The Cruzer starts at €2,800 and has a whole host of cool accessories that can be added on top of the base model. 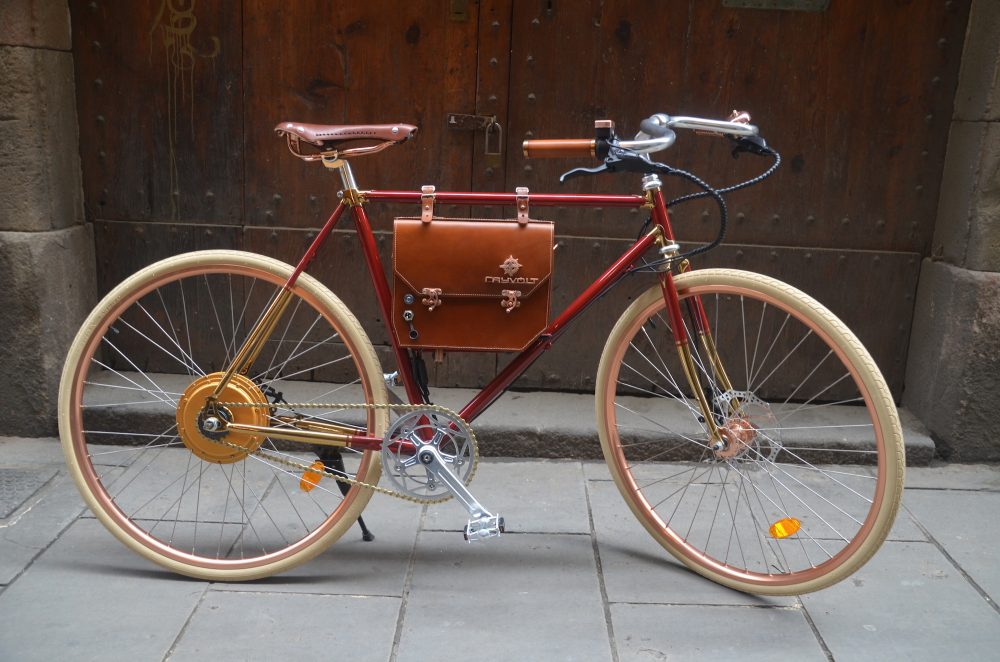 The Ambassador is perhaps one of my favorites from an aesthetic perspective. The double-butted chromoly tubes feature copper gussets that are just so classy.

The battery is held in a removable leather (real leather this time!) satchel bag.

It can be removed from the bike to carry with you, along with a shoulder strap. The battery only takes up the bottom half of the bag, meaning you can use the rest of the bag for actual storage.

The copper work on the Ambassador is eye-catching and helps to give the bike a classy look. And similarly to the motor in the Cruzer, the Ambassador’s motor has been custom developed by Rayvolt. This one is only 400 W though (and customizable down to 250 W for Europeans) so while it isn’t as powerful, it gets amazing range of over 60 miles or 100 km.

The Ambassador is definitely the hipster-spec option in the lineup.

I had the pleasure of riding the Ambassador through some beautiful boulevards in Barcelona. Everywhere I went people were turning their heads to follow me. The bike is just so elegant looking and was a lot of fun to ride! I’m not sure I’m hipster enough to pull it off as an everyday driver, but I could see this one being very popular in San Francisco.

With its €3,650 base price, it’s a bit more expensive than the Cruzer. But I don’t think anyone can accuse it of not having the looks to back it up. And with the high quality leatherwork, copper accents, hydraulic brakes, strong and lightweight frame, the Ambassador isn’t just pretty to look at – it’s a high quality ride.

For those that want to own a Rayvolt but aren’t ready to fork over as much cash, the Beachin’ could be what you’re looking for. 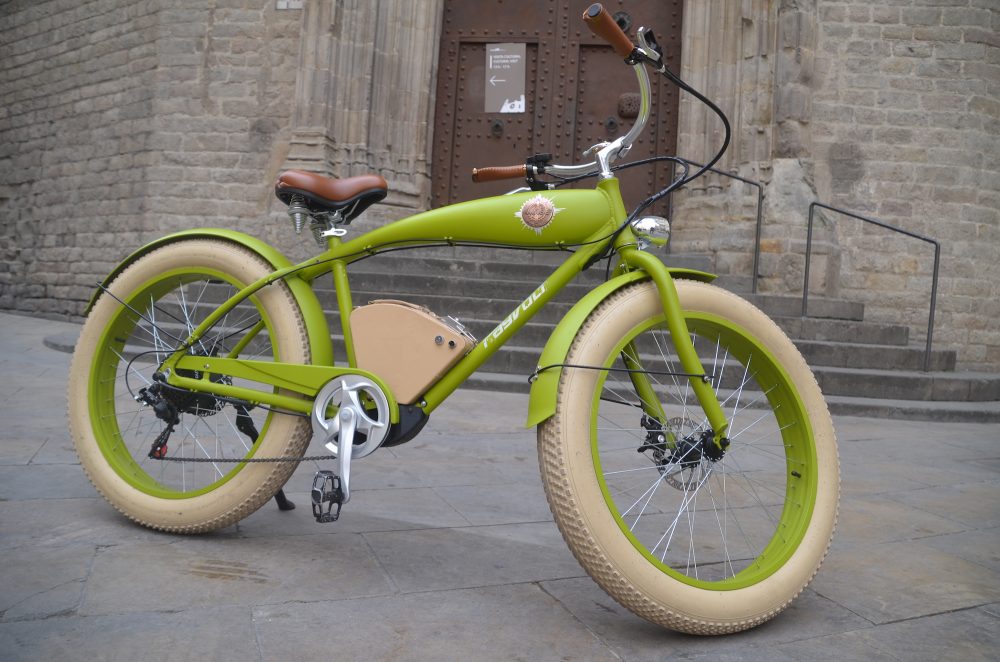 The Beachin’ is a balloon tire beach cruiser that starts at just €1,999. For the lower price you won’t get Rayvolt’s custom motor though. This one sports a Bafang rear motor. But it does include multiple gears, unlike the other models. That makes it better for those that want to pedal through a wider range of gears.

It’s also likely the most comfortable of the lineup. While riding this one I could tell that the Beachin’ was the most laid back and easy riding of the bunch.

Rayvolt is also working on a smaller folding version of the Beachin’ called the Little Beach. It’s funnier when CEO and Founder Mat Rauzier says it in his Spanish accent. 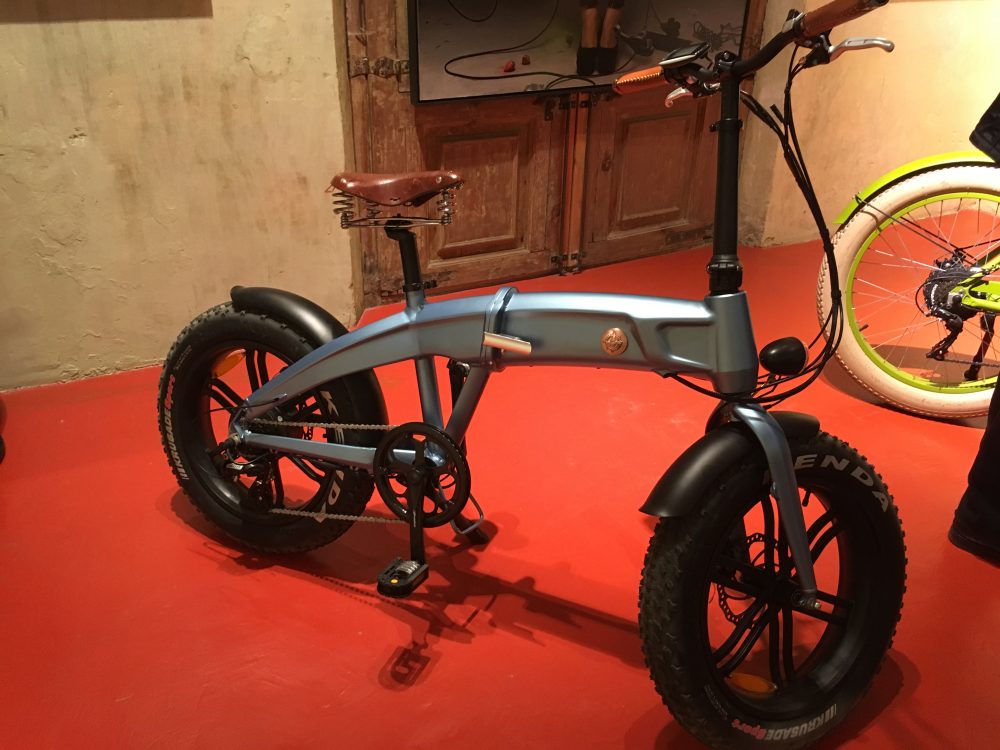 Rayvolt is also working on a city version of the Beachin’ that is known as the Clubman. With narrower (though still large) white wall tires and a less cruiser shaped frame, it’s a bit classier and more suave than the laid back and fun Beachin’.

The Torino is the sportiest of the lineup and almost feels like a vintage cafe racer. With its straight bars and narrower wheelbase, the Torino is extra nimble. 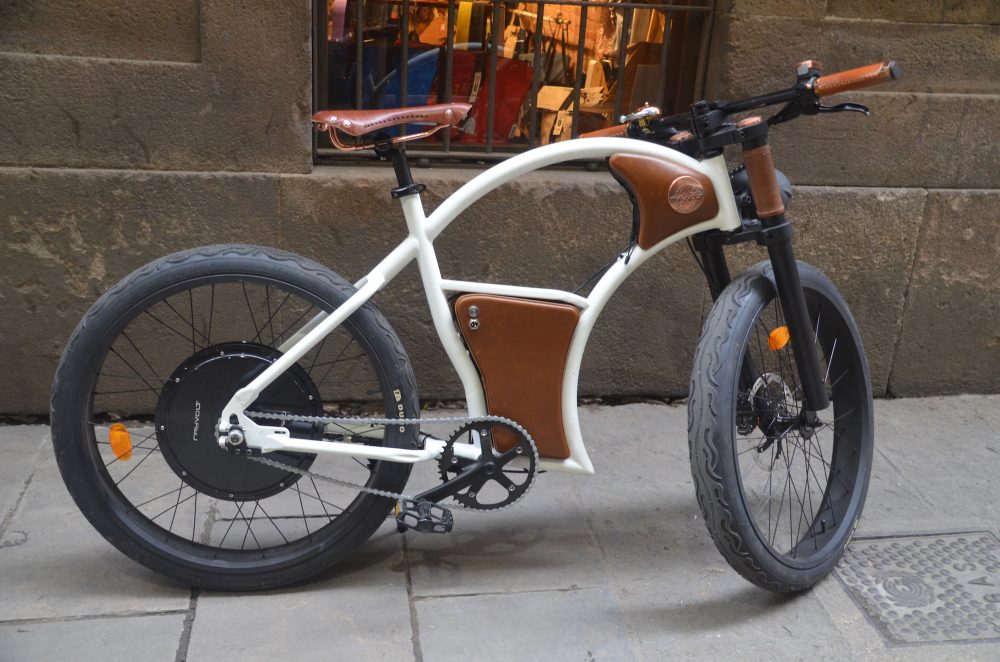 The company sometimes refers to it as the “getaway bike”, as in this is the one bank robbers will want to use for their getaway. With the 1,000W motor option it is extra powerful. Yet with the same style of leatherwork and copper accents found on the Cruzer, it looks just as impressive sitting still.

The Torino also features a vegan leather-covered storage section but it’s much smaller than the Cruzer due to the smaller frame.

For those that need a more agile bike for weaving through traffic or around pedestrians, the Torino is the ticket.

If you thought Rayvolt only built bicycles, then think again. They are also hard at work on a vintage electric cargo bike in the form of a front loading electric cargo tricycle.

Mat was inspired to develop this one after a Dutch friend showed up to his child’s birthday party with a front loading cargo bicycle. He wanted to get one for his wife to take the kids around in, but she didn’t like the instability of the long bicycle versions. So instead the team began building a tricycle.

This one is still in the prototype stage, but it should be quite nice once they have it finished.

As if the Trixie wasn’t enough, Rayvolt wants to expand even further beyond bicycles. So far the team has already made impressive progress towards that goal.

They are teaming up with electric scooter sharing company Yego. Much like Lime and Bird, Yego wants to get into electric kickscooter sharing. However, experts agree that typical scooters used by most companies don’t last long enough to become profitable.

That’s why Rayvolt is working on a super robust electric scooter with larger wheels and a more stable foot platform, plus a much larger battery. Rayvolt was only showing off a prototype they have been rushing to complete for today’s presentation. But Yego has already ordered 400 units for a pilot program, so Rayvolt has some work to do to have 400 of these on the road by this summer. Assuming the test goes well, the new scooter design could end up replacing the cheap Bird scooters we see everywhere. 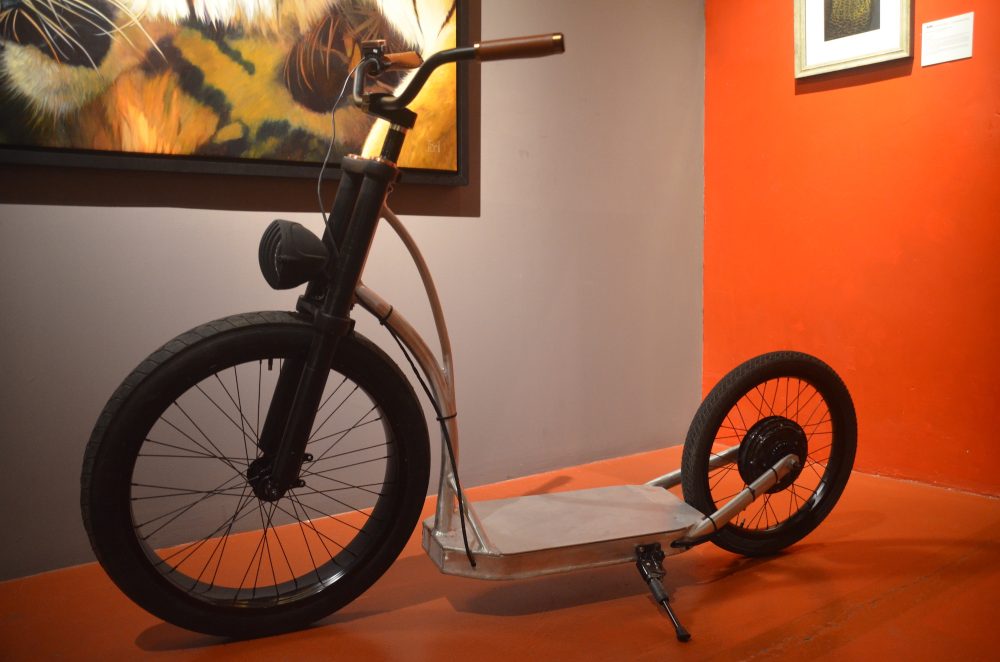 And perhaps the most exciting thing that Rayvolt is working on is an electric motorcycle. They just finished a very early stage prototype that they showed off today. Thus you’ll have to excuse the visible welds, wires and grinding marks. But even the prototype with its 3D printed parts and half-completed leather work shows what a cool electric motorcycle Rayvolt is envisioning. 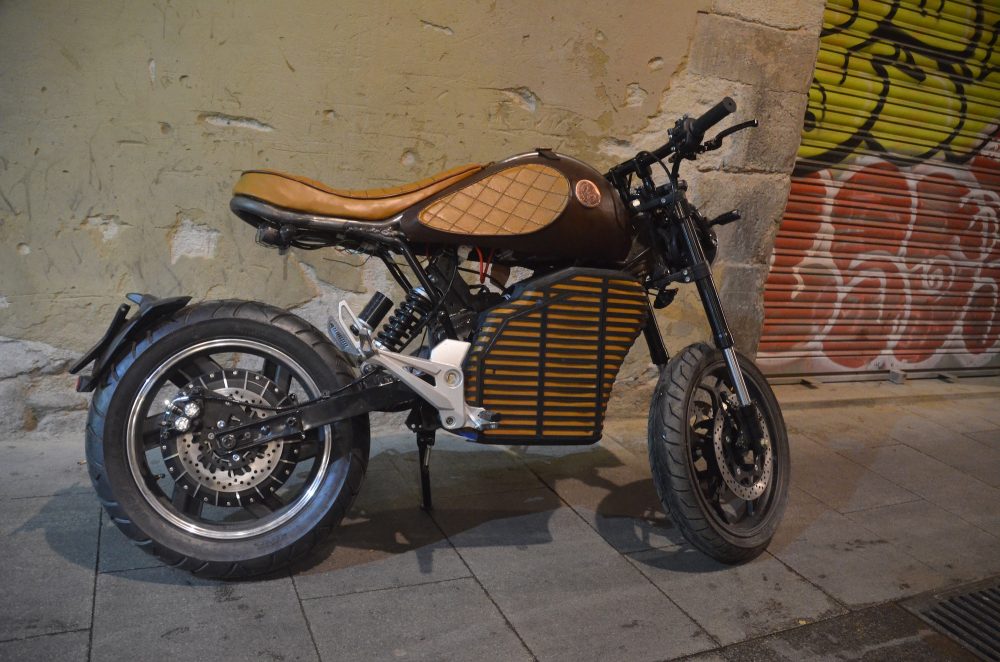 With 10 kW of power and a top speed of 120 km/h (75 mph), it will be highway capable. It’ll also feature around 5 kWh of battery in two jerry-can styled packs that are removable from electronically opening doors in the lower battery compartment. And that bulbous looking tank? That’s to store a full face helmet or two nested three quarter helmets.

I was one of a few that got a chance to ride it discretely the night before Rayvolt’s big presentation. I say “discretely” because it isn’t plated or even registerable, yet — it’s still a prototype. But even weaving through the darkened alleyways of Barcelona, I could get a sense for the wheelie power of this thing. There’s nothing quite like the electric torque!

Rayvolt continues to expand at a rapid pace

Despite the impressive lineup and wide variety of vehicles, Rayvolt actually has a very small team. But each of them is more than dedicated to the company’s mission of developing high tech electric transportation that looks out of place in this century.

Their team spans multiple continents to handle everything from design and engineering to production and brand management.

Over the next year, they are preparing to roll out their latest models as well as make progress on the upcoming electric scooter and motorcycle – both of which will open new doors for the company and fill a void in the market that has yet to be satisfied.

You can check them out at www.rayvoltbike.com/.

What do you think about Rayvolt’s vintage-inspired electric bikes? Let us know in the comments below!